Following on from March’s Midnight Deluxe, Spanish coders Ratalaika Games are back with InkSplosion, a colourful twin-stick shooter that is available now as a cross-buy title for PS4 and the Vita.

With no plot to worry about and not even a tutorial (a splash screen showing you the controls is available though), this is an immediately accessible game.  It uses the standard twin-stick set up, left stick to move and right stick to aim, but annoyingly it does require you to shoot with the

button (we prefer these games when you autofire) and on this you’ll just hold down the button the whole time anyway, so there’s no tactical advantage to not having autofire.   You can also slow down time with the

button, but at a cost to your health. 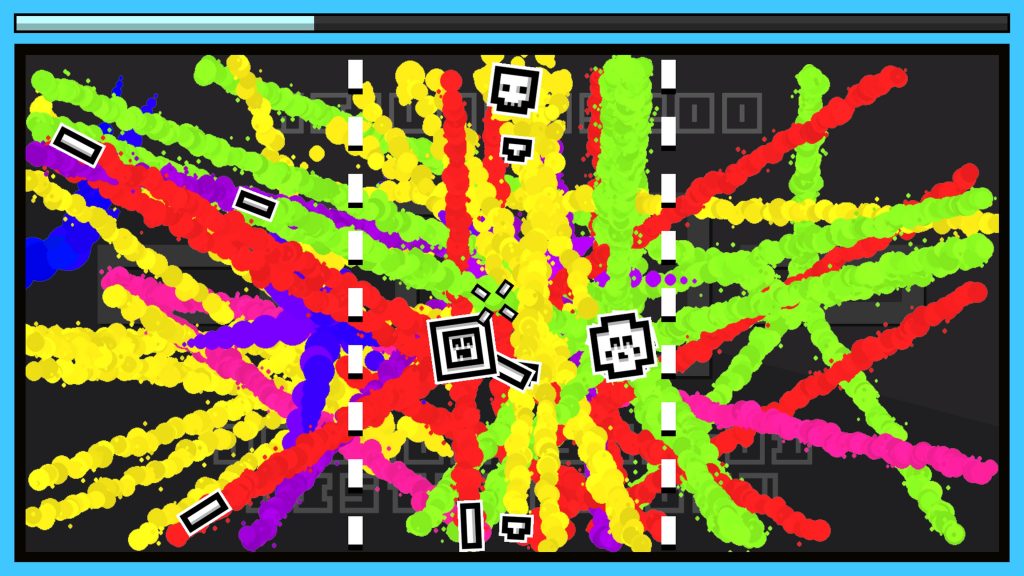 The game offers you three modes – Classic, Arena and Hard – and these all play out in a similar way.  On Classic (and Hard, which is just a tougher version of Classic) you are faced with an endless series of random stages each of which has four enemies and some sort of moving barrier to deal with.  You’ll also be assigned a random weapon.  Then it’s just a case of taking out the enemies as quickly as possible.

It’s not exactly bullet hell but the enemies do put up a fight and between the bullets and the barriers, it can initially seem a little tricky.  Especially as you and the enemies are a little chunky for this sort of game.  However, each enemy defeated grants you a little health back.  Occasionally a combination of tricky level and useless weapon (rocket launcher) can stop your progress in its tracks but this is by no means a difficult game. 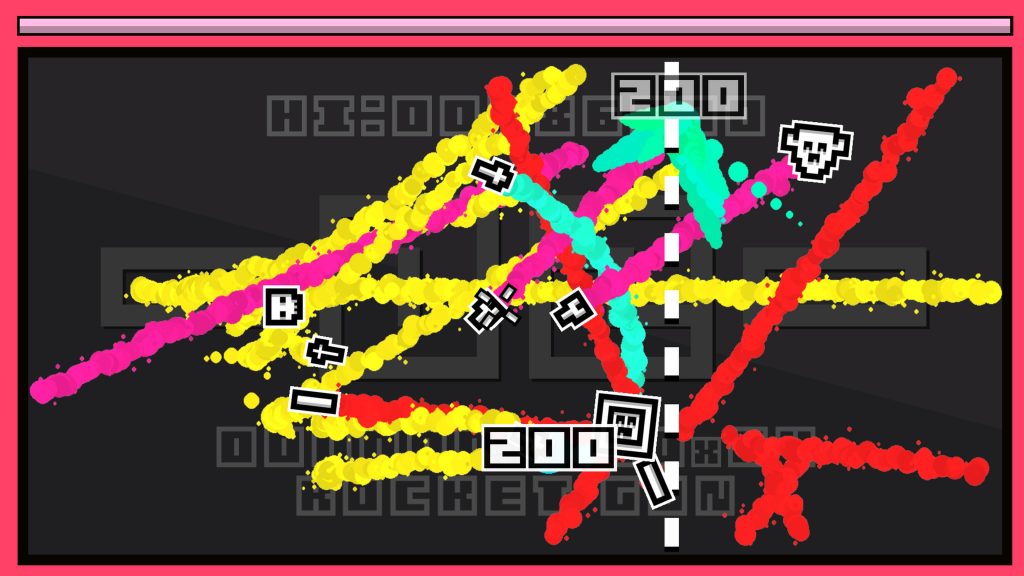 Scoring 100,000 points will unlock Arena mode which plays much the same but without the barriers which, to be fair, makes it a more enjoyable mode even if at that point it is just a very limited example of the twin-stick shooting genre.  100,000 points is the target here if you want to unlock Hard mode, at which point you’ve got access to the whole game.

Much like Midnight Deluxe, the game offers a suspiciously easy platinum trophy.  Two in fact as the PS4 and Vita trophy sets are separate.  I was able to max out both versions this morning and while that will attract some players, it does rather limit the usefulness of the game as after the platinum there’s no reason to come back to it because there are no leaderboards.  This is a bit silly for a shoot ’em up, especially one like this that has a multiplier-based scoring system, as there’s no reason to keep upping your score and with no co-op options, this ends up being a fairly bare-boned package. 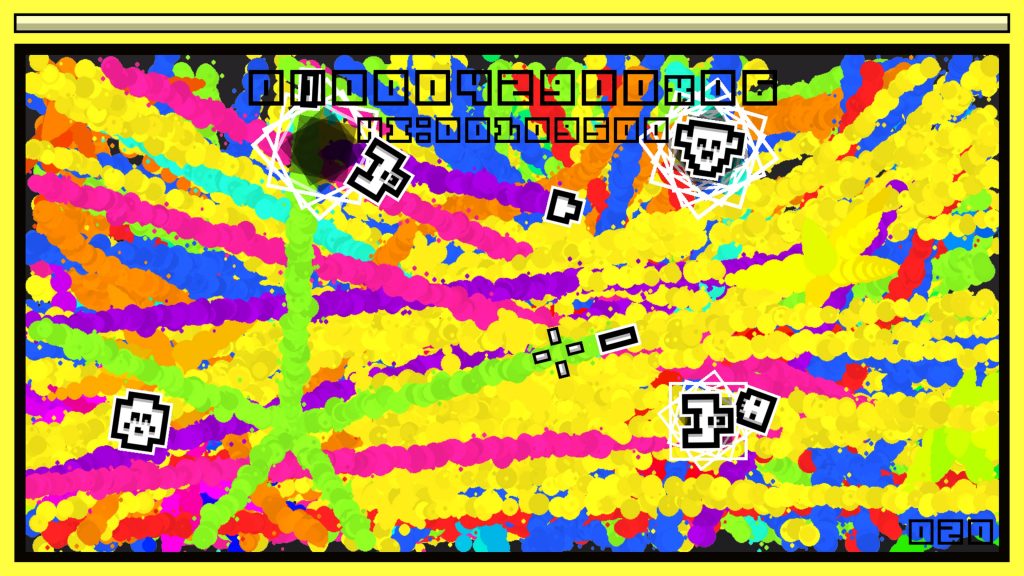 As the name (and these retina-shredding screenshots) suggests, there is a focus on colour in the game.  Essentially this is a monochrome shooter with white ships and bullets on a black background.  However, each shot fired, each attack landed spews out globs of colour onto the space behind.  It doesn’t have any gameplay implications at all though and is just a design choice and while it does brighten things up a lot, it doesn’t really help.  On the Vita the paint effect is actually quite ugly and on both formats it doesn’t do you any favours when it comes to spotting where the bullets are.  It even makes information such as your score and multiplier impossible to see.

If the game didn’t have this gimmick and the eventual paint-splattered backdrop was the default look from the start of the game, people would hate it.  The fact that it builds up and clears makes it tolerable, although it doesn’t clear on Arena mode so there’s that to contend with.

Ultimately, this is an average twin-stick shooter with a couple of curious design choices.  Sure, the easy platinums will draw in buyers but if you’re looking for a top class twin-stick shooter, this isn’t it.  PSN offers so many better options but there’s nothing here that is game-ruining either, apart from its mayfly-like lifespan and it took longer to write this (admittedly short) review than it did to platinum the game twice.  If this ends up on PS+ or dirt cheap in a deal, it might be worth a look but only when you’ve exhausted the wide range of better games out there.

InkSplosion
4 Overall
Pros
+ Cross-buy
+ Fairly immediate action
+ Trophy whores will like it
Cons
- Visual gimmick is distracting but has no bearing on the gameplay
- Over very quickly
- No leaderboards
Summary
InkSplosion's combination of very basic twin-stick shooting and distracting visuals is problematic but there's an hour or two's worth of fun to be had here if you're a fan of the genre.