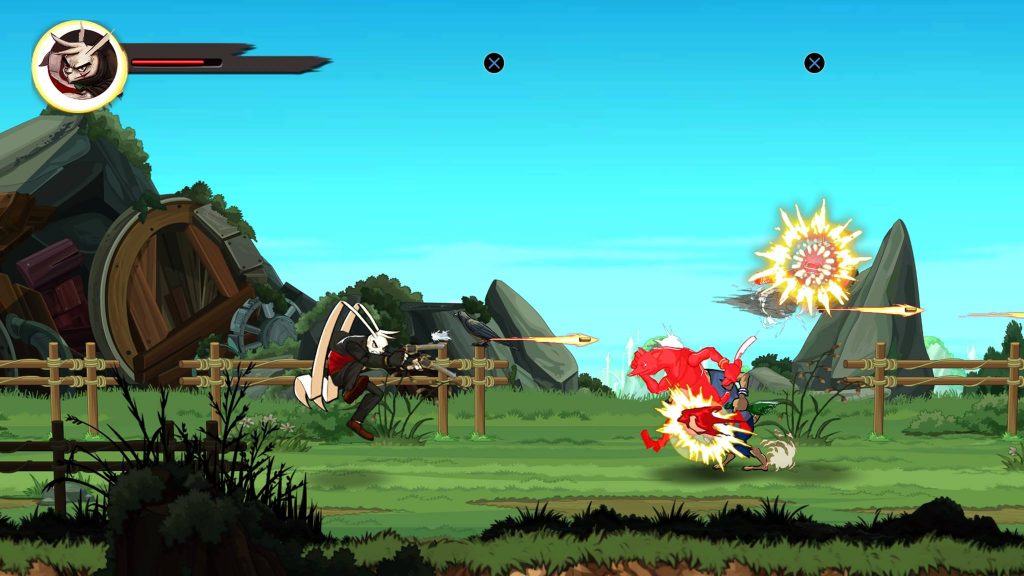 It must be quite difficult to make a competent side scrolling beat ‘em up in this day and age. Despite being a dominant genre in the 90’s thanks to behemoths like Golden Axe, Streets of Rage or Final Fight, it seems that either developers are shying away from the genre because of industry trends away from short linear corridors, or because maybe it is simply because they are hard to do well. There are a few shining examples of recent years though, the likes of Scott Pilgrim hit high the high notes for example and Dragon’s Crown was a fine attempt at reigniting interest in the genre. Dusty Raging Fist attempts to do the same and to some degree shows promise, however with mixed results.

You star as one of three anthropomorphised characters; Dusty the leather jacket wearing rabbit, Kitsune the ninja fox or Darg the goat/ ram thing that has more muscles than Arnie in his prime. Either playing solo or with two other friends (local only), it is your job to fight through hordes of increasingly colourful and difficult enemies with powerful combos and even more powerful elemental attacks that you unlock along the way. Of course, each character you play as has different attributes and abilities that allow them to edge over the enemies that you encounter, Dusty being a good all-rounded character that can mix up gunplay with a large sword, Kitsune with speedier combo attacks and Darg with slower brawling type moves. 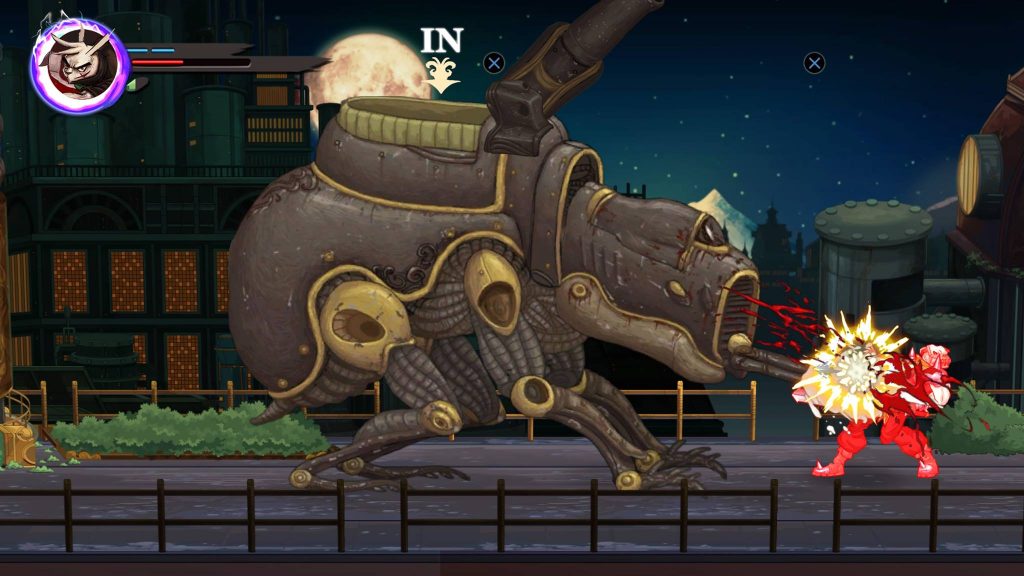 As you progress throughout the game you meet with a couple of support characters called Leo and Snow who can assist with long range attacks from the fourth wall. Snow is a sniper who can pick off enemies on the ground or in otherwise unreachable background towers, while Leo is a rocket launcher wielding Lion who can clear large obstacles or enemies in the way with a well-placed blast. These characters also have other practical attributes, such as with Snow who can shoot background elements for your character to gain additional experience points but otherwise these two seem underutilised and are mostly useful only to get troublesome adversaries off you when you are being pummelled into oblivion. Additionally, there are elemental summons that you can use as a smart bomb to clear a screen, however these are generally quite useless due to the amount of work it takes to generate power from combos and their effects are not all that beneficial.

Behind all these simple and standard gameplay mechanics lies a slight problem that flies in the face of what feels like common knowledge within the genre. It seems that just about every enemy in the game has this annoying ability to interrupt a combo, despite being successfully pummelled for a few moments. It feels like when you fight a boss in Streets of Rage, but instead of being a thing that only big enemies can pull off, it is instead every single enemy in the game. At first this is a major nuisance as you can never seem to pull off a full combo for style or points, but you can overcome this in the later stages with experience based unlocks and the elemental attacks and summons you can utilise. 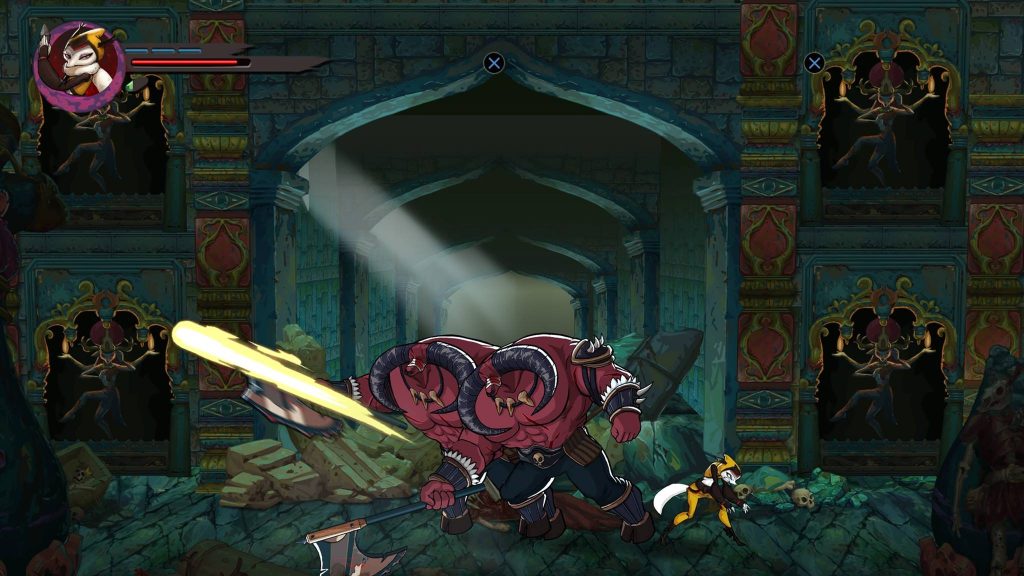 There are many more issues besides this also and this is where the experience is pulled down into infuriating territory. Punctuating the beat ‘em up gameplay are occasional platforming and vehicle sections that feel out of place and showcase an increasingly finnicky control system that can often see you careening into instant death hazards such as lava or pits that send you right back to a previous checkpoint without a hint of forgiveness. This isn’t helped by the fact that you must control your characters with the analogue stick despite this being played entirely on a 2D plane, due to the constant adjustments to the stiff jumping mechanics, it is all too easy to accidentally dash forward, turning what could be a successful jump into a treacherous momentum killer in seconds.

Another issue that some may feel is a niggle, but something that became a big nuisance for me is the way in which you collect health and experience. Upon defeating certain enemies, shooting background elements or opening chests you will see some orbs fly out that either give experience or health depending on their yellow of red hue. The only problem with this is that you can only receive their benefit when the orb runs into your character. It may not be immediately apparent, but you can imagine that when you are backed into a corner with only a slither of life remaining, seeing these orbs circling your character, taking their sweet time to actually be collected is nothing short of infuriating and has led to more deaths than could be considered polite. 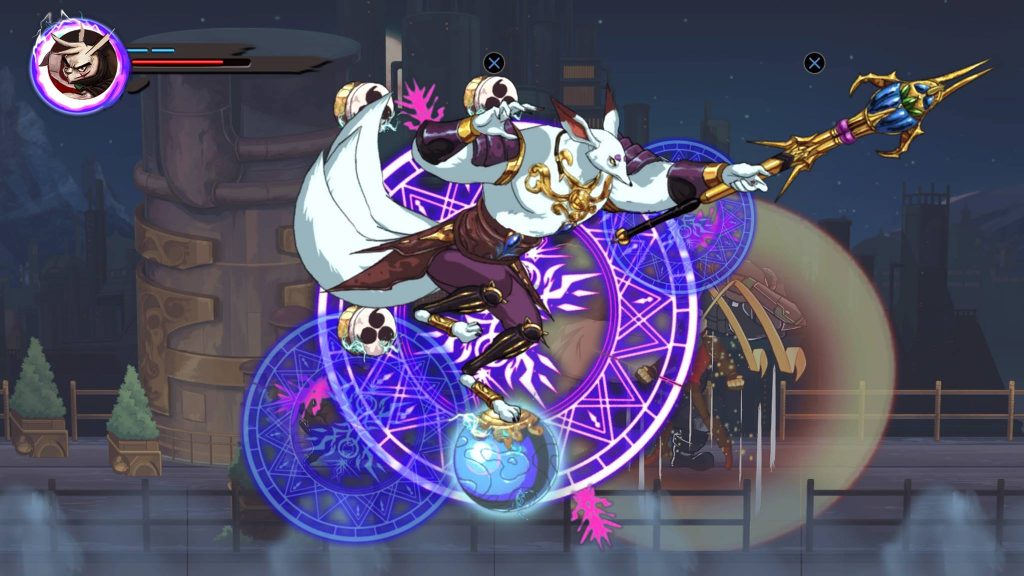 You can tell this is a passion project. As the second game in the Dusty series by PD Design Studio there is some clear thought gone into the creation and world of Dusty Raging Fist. The enemies that you face in the game are very creative, such as chainsaw wielding crocodile pirates, claw carrying tortoises and the various robotic machinations that you can encounter. There are some genuinely well drawn assets in the form of boss introductions and odd story sections that break up the gameplay, however, it is unfortunate that this creativity was not used when ironing out the kinks behind the battle and platforming systems. The game itself is infuriating at sometimes and at others just feels downright broken, had there been a bit more consideration into this aspect, then this would be an easy recommendation, but as it stands, Dusty Raging Fist is nothing more than an average game with pretty graphics.

Dusty Raging Fist
5 Overall
Pros
+ Nice art style and character design
+ When combos are unlocked the combat feels satisfying
Cons
- The controls feel very skittish at times, particularly during platform sections - Health orbs rotating around your character, delaying vital health - Combat quickly becomes tedious and predictable - Awful voice acting
Summary
Dusty Raging Fist is a great looking side scroller with some creative ideas. However, aesthetics can only take a title so far. Underneath it all is a finicky combat system and poorly finished platforming that quickly drags the game into infuriatingly bland territory.