PGA Tour 2K21 or to use the slightly shouty official nomenclature PGA TOUR 2K21, is, as the name suggests, published by Take-Two subsidiary 2K Games.  The cover golfer is some guy called Justin Thomas (no, us neither)  apparently ranked #4 in the world. There’s other golfers we have heard of on the roster like Fred Couples & Ian Poulter, though the latter doesn’t seem to be wearing the shocking clobber we’re used to seeing.

The PGA Tour part might be a surprise to long-term gamers, especially since the long running series had been an EA release year-on-year since 1990. This reviewer’s last brush with the series was Tiger Woods PGA Tour 2008 on the 360, so it’s fair to say things have moved on a fair bit since our last encounter. In fact the last golf game we personally ploughed significant time into was probably Mario Golf 64. Shut up, it’s ace. 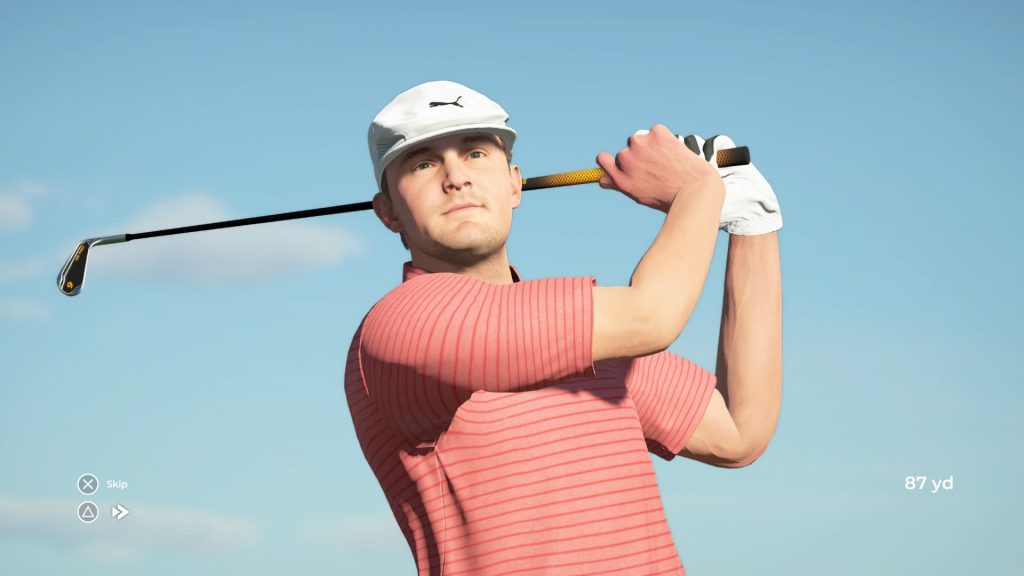 Rather than a successor to the last mainline series release Rory McIlroy PGA Tour in 2015, this is actually a follow-up to 2018’s The Golf Club 2019. It shares the same developer in HB Studios and is a refinement of the same engine, even down to allowing you to import courses you might have created previously. Our man Mike reviewed it then and gave it a fair 7.

While The Golf Club 2019 had a mere six licenced courses, PGA Tour 2K21 ups the ante and includes ten faithfully recreated TPC courses from the PGA Tour as well as further five to bring the total of authentic PGA Tour courses to fifteen. To a non-golf aficionado like us that might watch the Ryder Cup or the Open occasionally, they don’t mean much, though we’ve heard of Sawgrass at least. In addition there are courses set amongst the skyscrapers of Dubai amongst other places. We don’t know if they’re all actual courses, but all-in-all you’re looking at around thirty courses total. 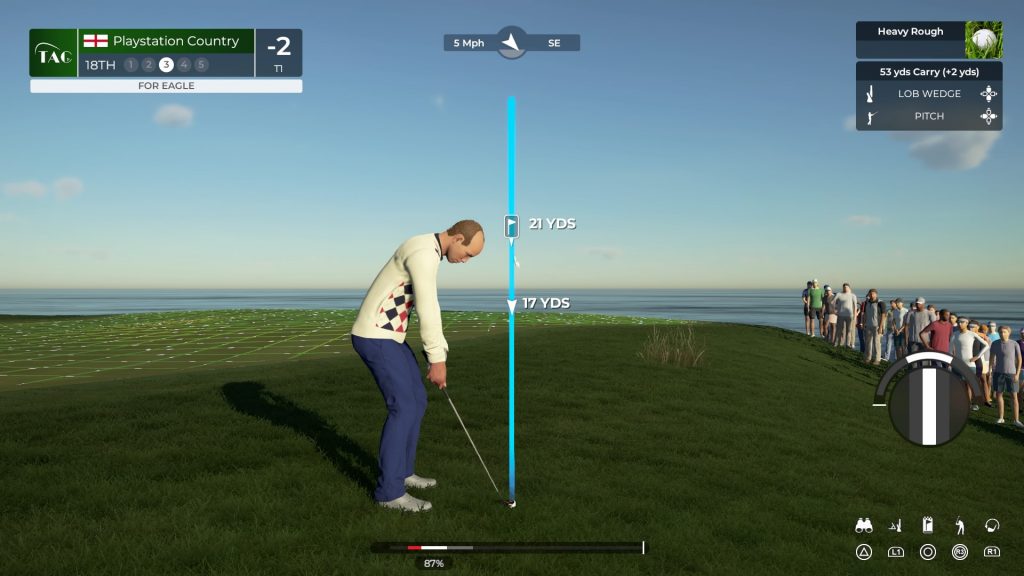 First off there’s a tutorial we’d recommend you do first if you’re a bit rusty or just want familiarisation with the swing mechanics and finer aspects of ball control. Though the fact that it insists on you completing a swing perfectly is an odd barrier to progress through the tutorial. Regards the swing mechanic, it’s very easy to slice your drive even with the default driver. It’s a frustrating way for a drive to go awry and a sure-fire route to a bogey on a par 4 hole.

Next up, creating your golfer. We went with a 170lb 6’3” lanky get with a receding hairline who needs to get more sunshine. Accurate. We could’ve even gone with the beard, but couldn’t get the grey tufts correct. Unlike other games we’ve created a player in, your avatar is a fair player at the outset. You won’t have to gain experience to boost stats for example. 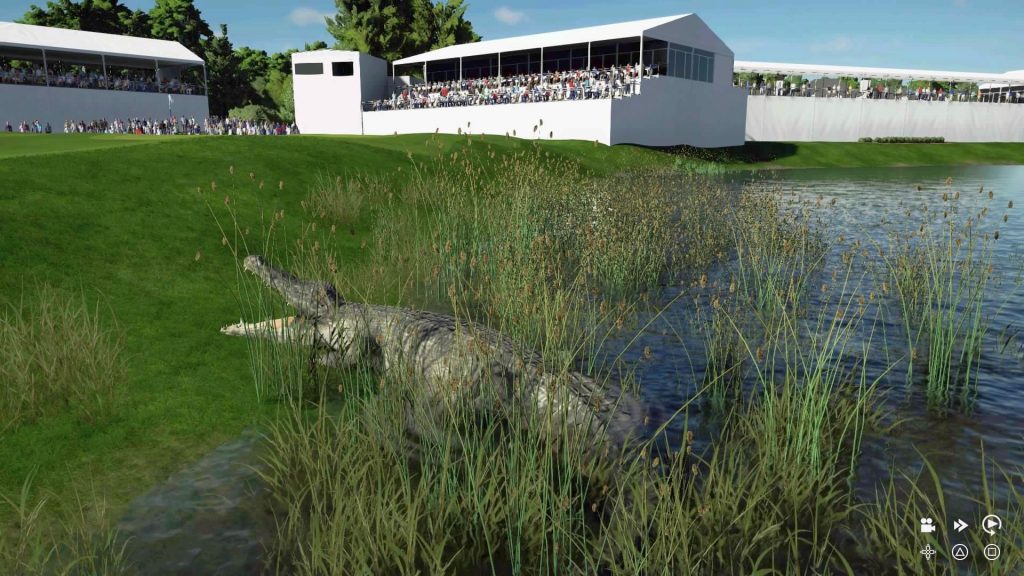 Anyway, once you’ve completed the tutorial and created your golfer, you can progress to the Q-School which allows you to put what you’ve just learned into action. Finish the eighteen holes of Q-School with a good enough ranking and you’ll progress to the Kornferry Tour. Rank high enough in that and you’ll reach the PGA Tour proper. One thing about the aforementioned tour, most of the courses are just fine. But then you get to the last but one course, a windy set of links with absurd gusting winds. Proper caught us out that one. We scraped through but it was quite the rude awakening. Thankfully normal service resumed  after and we subsequently qualified  for the main event. 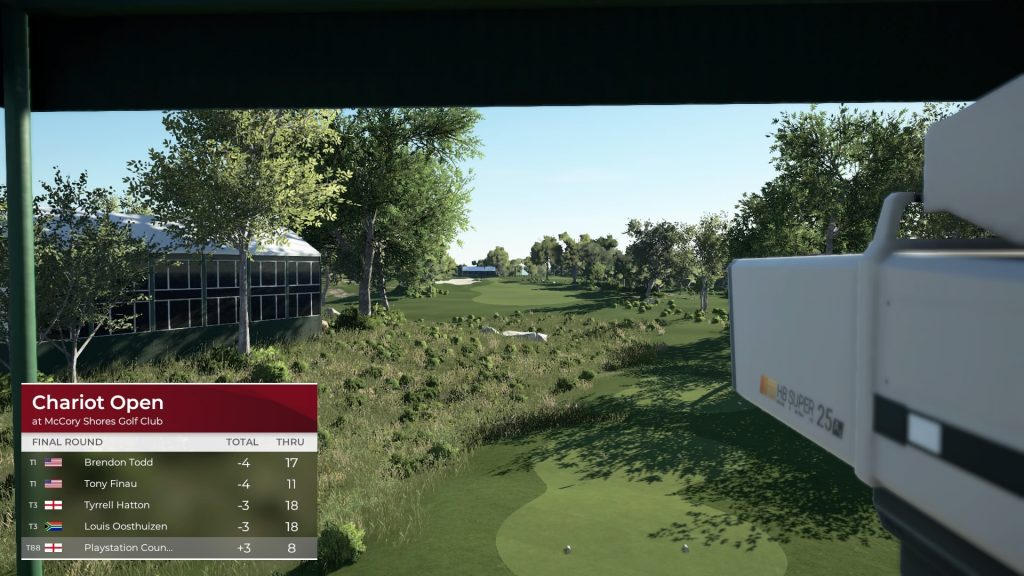 Your goal is to score enough ranking points to progress up the overall leaderboard for the Fedex Tour, with a hope of making the cut for the end of season tour. We started out promisingly enough, even winning a couple of tournaments and being invited to some tournaments on the strength of our rankings. But somewhere along the way our form deserted us and we find ourselves unable to hit the fairway, let alone make reliable putts. Perhaps we just need to relax. But enough of our slump.

Graphically PGA Tour 2K21 is pretty good given the fact it is operating within the Unity engine. Perhaps a little long in the tooth now but it looks the part. Enough that our elderly relative was contemplating buying a PS4 just to play this at least. 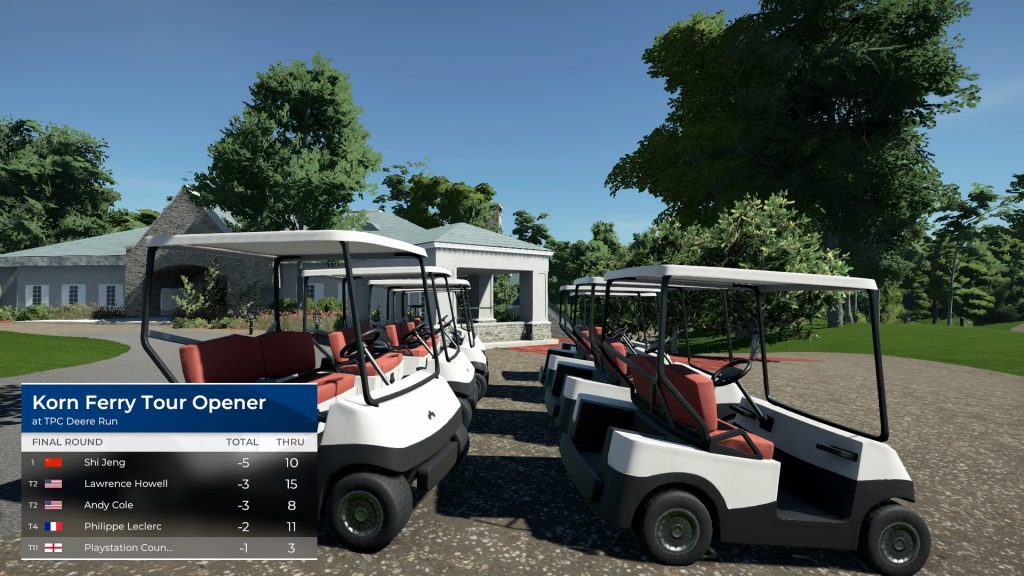 The presentation is top notch with commentary from softly spoken Aussie Luke Elvy and slightly more brash American Rich Beem. The latter won the PGA Tour Championship in 2002 beating Tiger Woods, so he’s a fair player. Their interplay and reactive commentary really adds to the atmosphere of a televised tournament when combined with cut-aways showing how your rivals are doing. It’s gratifying when your designated rival screws up a putt just like you do. It’s nice to see that the AI isn’t infallible at least.

To further add to the feeling of authenticity, you can unlock and equip additional golfing fashions as well as clubs from all manner of licenced real world brands such as adidas, Callaway, Wilson and Under Armour to name but a few. During your career you can take on sponsorships from the various brands with a view to unlocking new gear as you fulfil sponsorship goals such as X number of birdies across three rounds or hitting the fairway consistently. 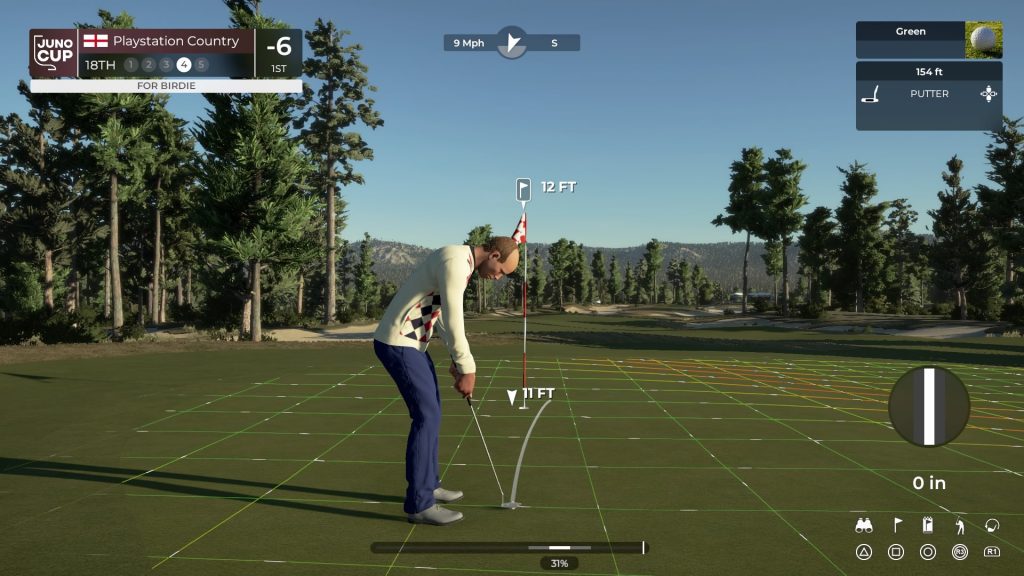 As we mentioned, we’re finding ourselves increasingly prone to slicing our tee shot. Thankfully iron play and putting is top notch so even if you end up in a bunker off the tee, all is not lost with a recovery for par or better more than possible. Purists may find the putting assists make things just that bit too easy, but for us mere mortals it makes negotiating the trickier greens possible. There’s nothing like lining up your best guess on a long attempt and having the putt preview show you’re on track. Though you can still mess up and putt wide despite the aids.

In addition to standard matchplay, there’s also skins & scramble scoring available if you’d prefer an alternative game type. The primary focus here is very much on the titular PGA Tour though, but there’s trophies for winning a match in both. On top of that there’s online play for you to sink your teeth into if you fancy getting beaten to a pulp by an online opponent. Though if you’d prefer there’s even local multiplayer. 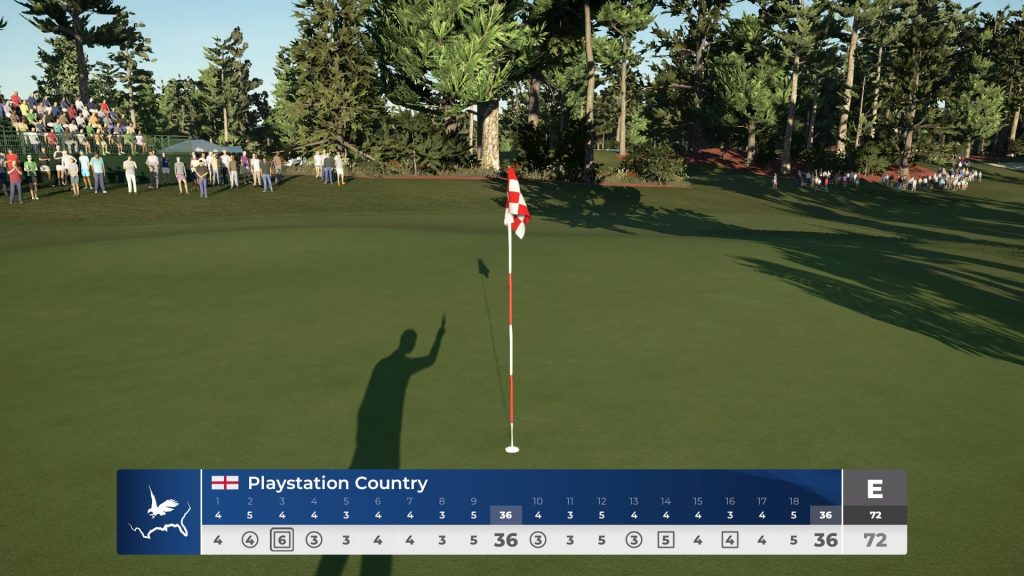 In conclusion, PGA Tour 2K21 is a fully featured golf sim that you can plough hours into, nailing that ‘just one more hole’ feeling perfectly. Our first full evening on this turned into gone 2am put it that way. Perhaps our frustrations with our swing are down to our crappiness, but as far as we can see there’s no alternative swing method other than switching it to the left thumbstick. Hopefully the PGA Tour licence will allow this to reach a much wider audience than if it continued solely with The Golf Club branding.

PGA TOUR 2K21
8 Overall
Pros
+ Presentation and graphics are fantastic
+ Feeling of authenticity is well reinforced by official licences and commentary
+ Iron play and putting is excellently implemented
+ Local multiplayer!
+ Maddeningly addictive
Cons
- Career mode unavailable offline
-  When you're on a bad run, it can feel like you're never going to catch a break
- Tutorial insistence on perfect swings irksome
- No alternative swing method available so perhaps not idea for those with accessibility issues
- Throwing a windy course into the last but one course of the training tour is just mean
Summary
PGA Tour 2K21 is the start of a new era of this venerable licence made famous by countless EA games, this time with The Golf Club engine underpinning matters. It's as good a golf game as we've personally played and is even in danger of having us watch an actual tournament on TV sometime. Recommended.