Home » Reviews » PS4 » Through the Darkest of Times – PS4 Review

Through the Darkest of Times, to give it what should probably be its true title; “Durch die dunkelste Zeit” is a rare thing. That being a videogame depiction of the Nazi regime from the viewpoint of anti-Nazi agitators. The fact that it comes from Berlin-based indie dev Paintbucket Games makes it all the more notable.

Initially set amongst the events of 1933 as the NSDAP rose to power, Through the Darkest of Times is very much a work of fiction within a very real historical context. You are the leader of a small resistance cell of like-minded people rightly appalled by the actions of the Nazis. 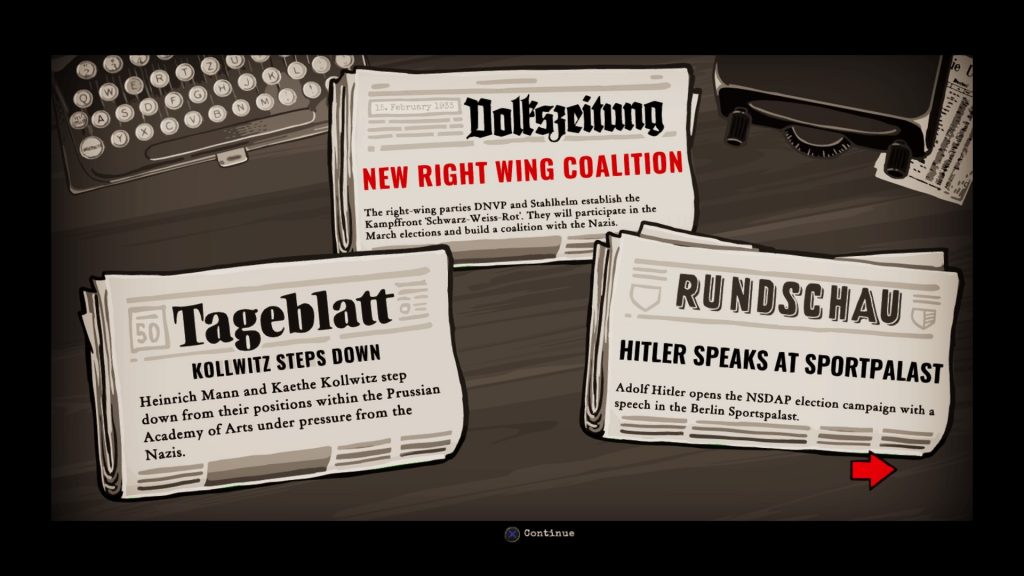 Penned as “a historical resistance strategy game”, you could focus on the story mode and get through to the end of World War 2 and hence, the fall of the regime. Or if you would prefer a far steeper challenge with every move, Resistance mode is for you. Story mode isn’t exactly a cakewalk though.

Bringing to mind the real-life actions of Otto and Elise Hampel; and subsequently the book loosely based on them by Hans Fallada, Alone In Berlin; your initial actions are limited to initially daubing slogans on walls decrying the regime or producing anti-regime leaflets. As the grip of the regime takes hold of the country, your actions become ever bolder and potentially dangerous. 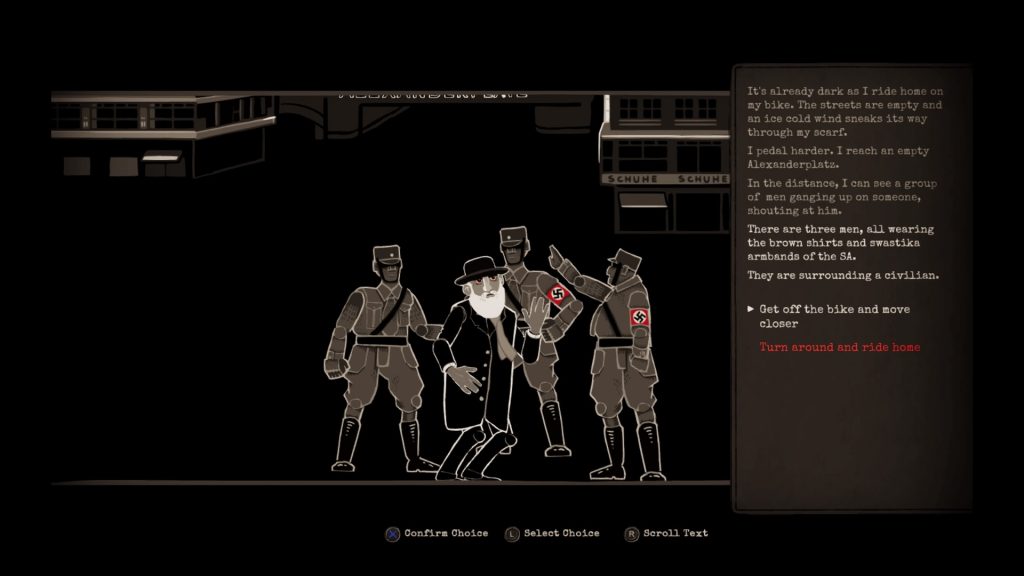 Each “turn” such as it is, can be broken down into four distinct phases. First the newspaper headlines of the day (beginning in 1933 with Hitler being appointed Reichskanzler) set the historical context. These get progressively bleaker the further you progress, with a brief respite in 1936 as the Olympics take place.

Next your resistance cell meets to discuss any pressing issues that affect their day to day lives. This can also involve any doubts your cell has about members who might be moles with prompts as to whether you confront them or come to a diplomatic solution. At this point you can then assign your co-conspirators to the tasks at hand.

These tasks are across various Berlin neighbourhoods, some of which you might be familiar with as an outsider, moreso if you’ve ever visited the city. They’re ranked in terms of risk by a simple traffic light system. The riskier the task, the higher chance you have of your cell members being spotted by the Gestapo or other malevolent eyes. Coupled with the fact that the more a sequence goes on, the more the suspicion builds. 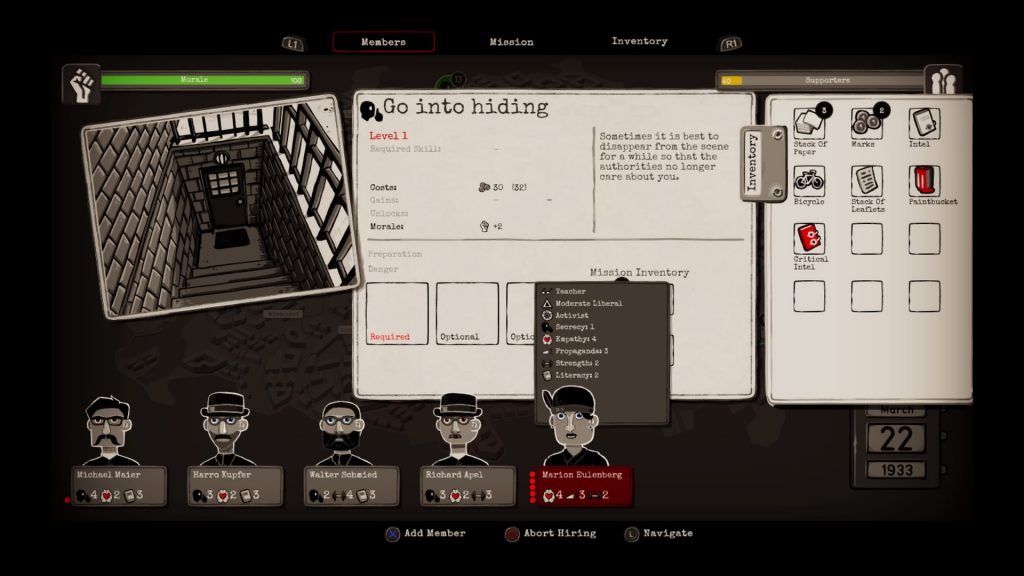 Eventually the heat on your members grows and grows to the extent that their very presence on a mission is enough to attract unwelcome attention, you’ll have to realistically consider whether sending them into hiding for a turn is preferable to them being arrested. As well as being arrested, there is every chance they could die in custody depending on what task they’ve been carrying out. If your own character gets arrested too frequently you could even end up being sent to a concentration camp.

If it all sounds very bleak and oppressive, it is. Through the Darkest of Times is not a game you sit down and necessarily relax playing. It’s to games what Aaronofsky’s film Requiem For A Dream is to cinema for example. Certainly not something you’ll want to play over and over again. 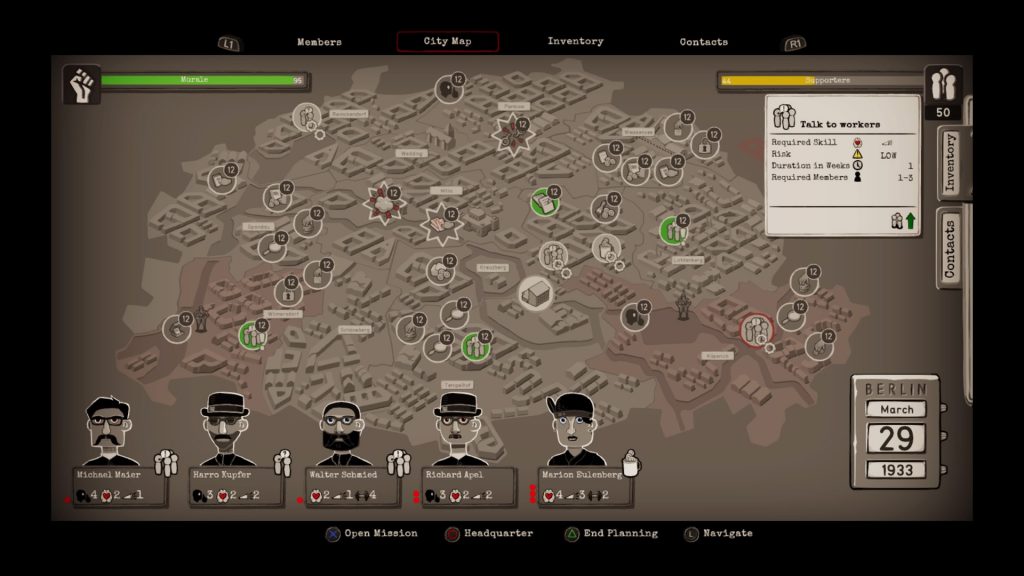 Yet despite the fact that this chronicles one of the darkest periods of human history, hope and compassion can still win out. This runs like a current throughout the game and this grim determination underlines everything you do.

Your primary task is to keep morale up in your group. The sheer fact you’re living in a totalitarian fascist regime means your morale takes a hit at the outset and it’s down to how successful your tasks are as to how much you offset it by. You can opt to engage in cultural activity which is enough to stave off infighting and mistrust among your cohort. None of your party will take part in any risky activities, but they will be glad of the break. 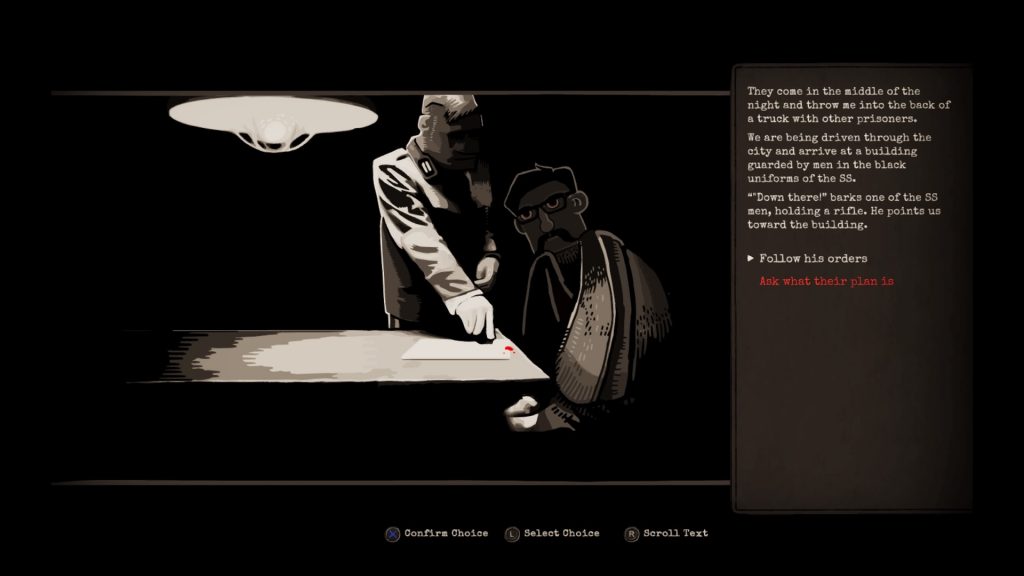 This phase of the game is occasionally broken up by historical events you’ll be party to, from the Reichstag fire in 1933, through the outbreak of war in 1939 to young children being forced into combat in the ruins of Berlin in 1945. Some are matter of fact, others are rather more hard hitting,  such as when you encounter an Auschwitz survivor or see how the Roma population were treated.

Paintbucket don’t shy away in the slightest from even the most hard-hitting and ugliest facets of the Nazi regime and how it affected all levels of German society. This unflinching approach can be startling at times, but never feels ill-placed or in poor taste. The deft writing does a fantastic job here. 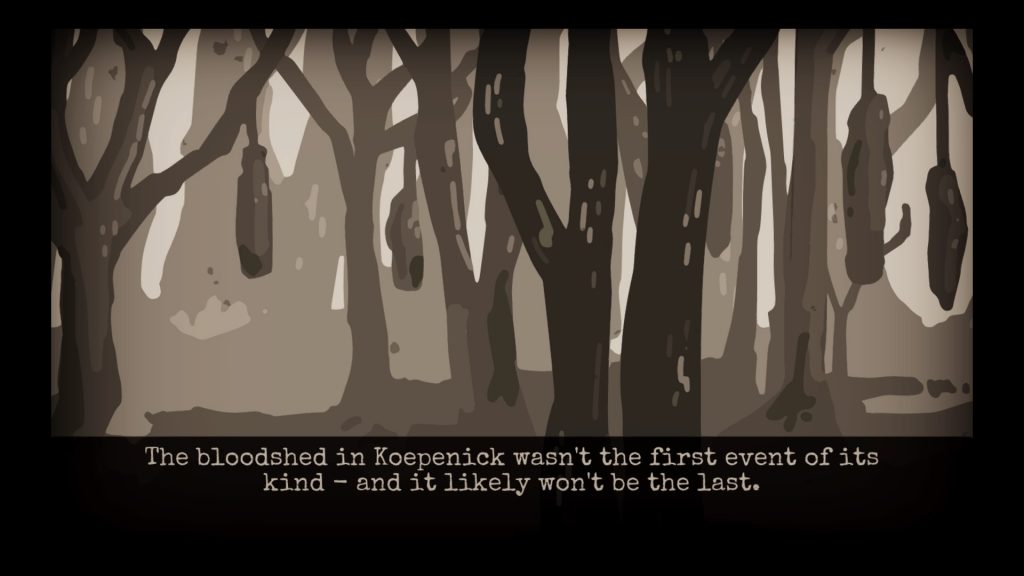 Mechanically, some of the mission types remained off-limits to us and weren’t clear how to progress to them. The path to being able to sabotage an AA gun for example, being unclear due to slightly oblique prerequisites. It seems a little churlish, but when you put it into perspective of what people actually went through, complaining about it seems less of a priority.

One other minor point, when you have the chance to recruit a new cell member, their attributes and what they could bring to the group are a little oblique. Perhaps they’re hidden in a help menu and it’s down to us to find them, but the UI didn’t help much in that regard. 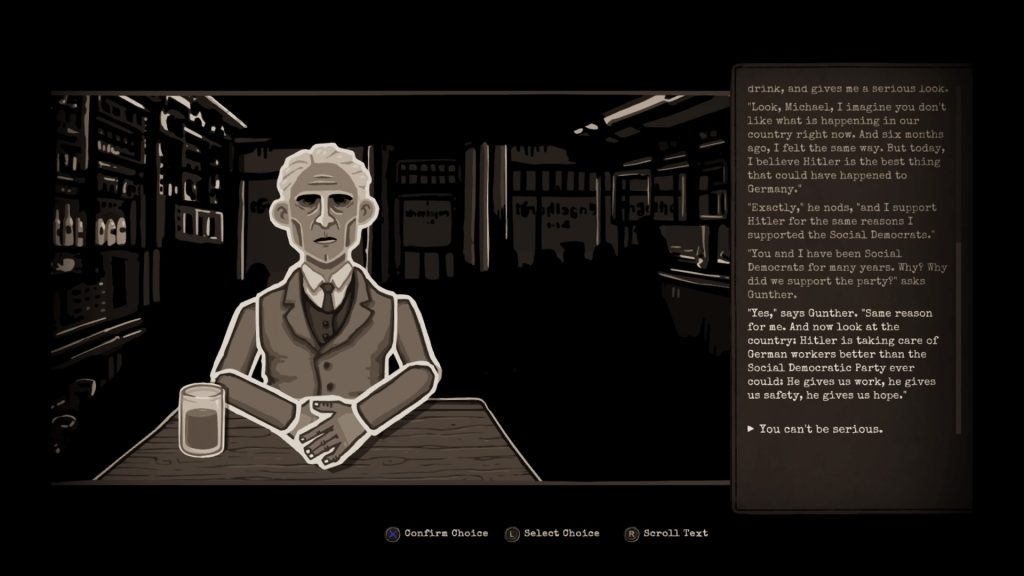 On several occasions, the parallels run uncomfortably close to current events happening in the UK, US and other supposedly civilised countries. Suppression of the press for example, persecution of minorities too. Those two are just out of the US in fact. Make no bones about it, Through the Darkest of Times is resolutely anti-Nazi in its tone and message. It’s just as important now to never forget what transpired in Germany and beyond, and that’s what makes this all the more powerful.

Through the Darkest of Times is uncomfortable to play, but if it weren’t, then its impact would be lessened. We can’t recommend it highly enough, slight mechanical foibles aside.

Cons
- Some mission types remain unavailable with prerequisites unclear, UI occasionally not helpful
- Maybe too bleak for some, though that's the point
- Translation of some text from original German is occasionally clunky
Summary
Through the Darkest of Times is a deftly handled depiction of life under the Nazis and how those few brave or bloody minded enough to defy the regime did so at great risk to their own and their loved ones wellbeing. The parallels to current events make this all the more essential. More a historical dramatisation with game elements than a game in the conventional sense, but you owe it to yourself to play this.