Mutazione is described by Danish developers Die Gute Fabrik as a “mutant soap opera” and that’s a pretty good description but before we get into all of that, there’s something you need to know.  This is one of those games, an indie game about feelings where not very much happens and that means two things.  Firstly, other review outlets are literally throwing themselves to the floor in uncontrollable displays of emotion to tell you just how special this game is to them and, secondly, you’re either going to absolutely love it or be bored beyond tablets by it.  I’m not here to necessarily talk about my feelings about the game but rather give you the cold, hard facts so that you can decide if it’s for you.  I will be choosing my words carefully.

Starting with the easy stuff, the game is an adventure game of sorts that kind of plays like a point and click game albeit with no pointing or clicking, save for a gardening element, and involves you playing as Kia, a teenage girl who goes to visit her ailing grandfather on the island of Mutazione.  This was once a normal, thriving resort but then a meteor hit, wiping out most of the life and infrastructure there and mutating the residents. 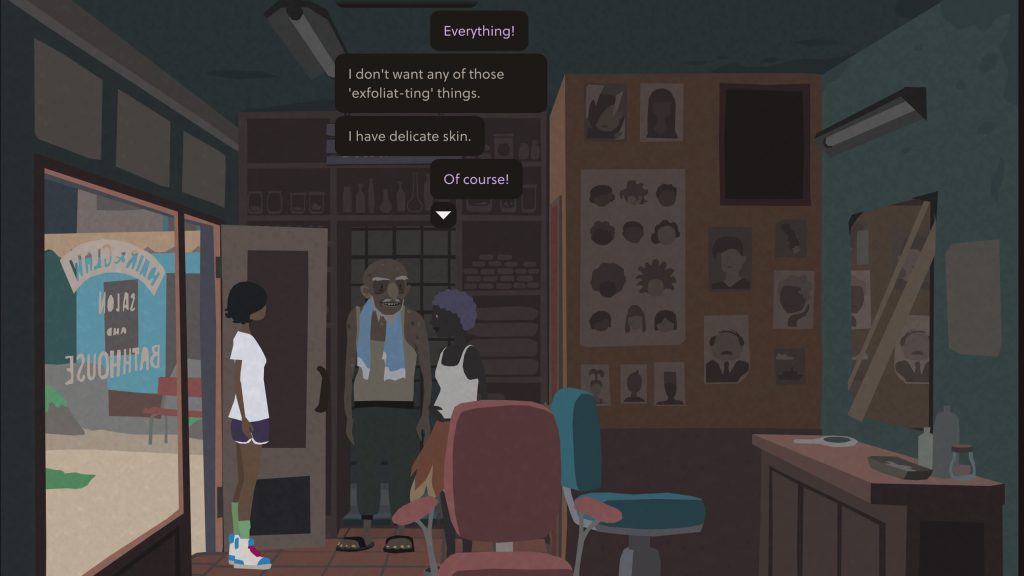 That may sound bleak but Mutazione is actually a lovely place to visit.  Yes, the people don’t always look like people but they’re all very nice and super happy to see you.  It perfectly captures the feel of going to visit a lovely village somewhere and you pretty much forget about the mutant thing immediately.  Especially when you get talking to people and realise that they all have a story to tell and that these stories involve the other inhabitants, which is where the soap opera thing comes in.  There’s always some gossip, banter or serious discussion to be had but there is also a main storyline involving your grandfather which takes place over seven days on the island.

The island is only a dozen or so screens wide with some interior locations on top of that, so it’s pretty easy to explore.  It’s all 2D as well and so you’ll soon learn your way around.  Once you’ve got your bearings the seven days, which take 5-6 hours to get through, involve you talking to people, helping them with their problems and learning how to grow plants.  There are only a ten or so main characters and so you’ll soon get to know them all quite well.  Luckily none of them are pricks either and, despite a few weird sequences, there’s not really any jeopardy in the game.  You wonder around, walking through toxic green wastelands without a care and picking seeds from the backdrop whenever your indicator shows you that they are there. 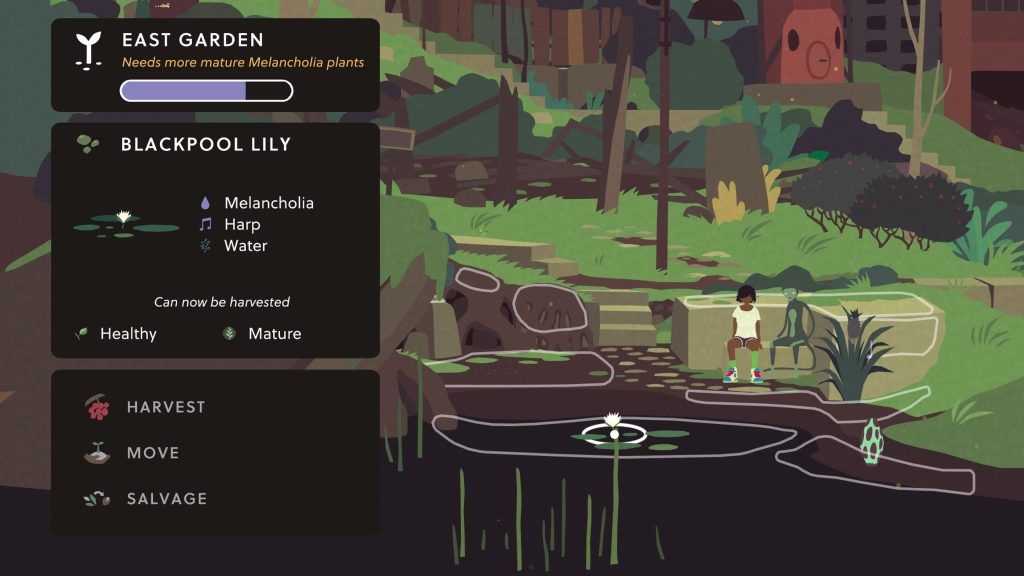 But here is where it all gets a bit divisive and while it’d be easy to just be enchanted by this sort of thing, there are concerns.  From here I’ll try to give the most balanced view I can, bearing in mind that you, yes you, might absolutely end up loving this game.

Okay, the story.  Many have praised the writing in the game and while I was surprised to find myself getting drawn into the story a bit, I’m not seeing where the quality is.  Yes, every character has a bit of a background but everything story-related is represented as text boxes that you press the X button to get through which isn’t the most engaging way to read a story.  Kia often has choices of responses but there are no signs that they change the flow of the conversation at all, they certainly don’t seem like they’ll have any impact on the game.  Indeed it seems like a large amount of the conversations I had didn’t really matter at all, like they were just there to fill up the game.  Some might call this depth, some might call it filler. 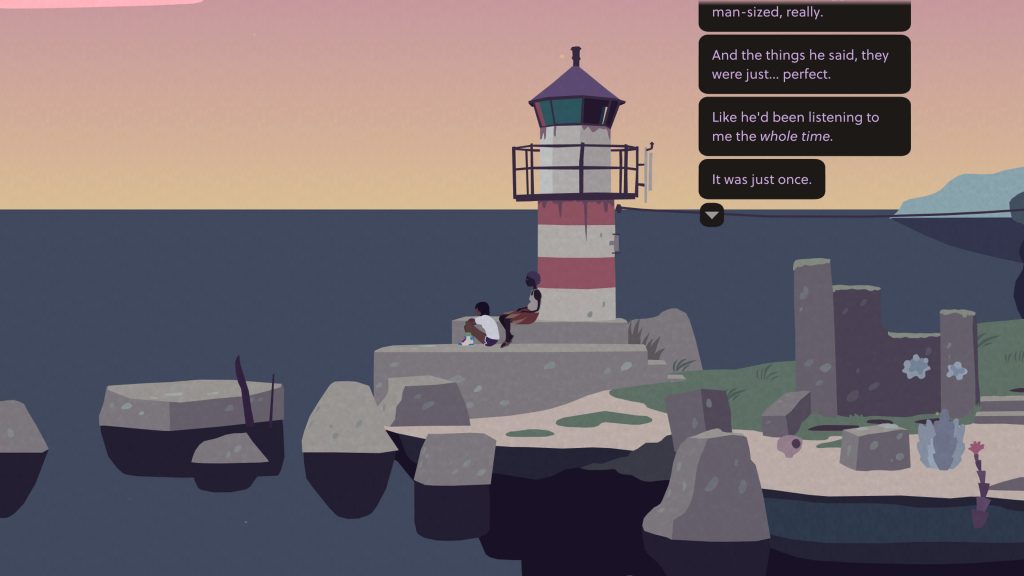 The story falls into some really obvious soap opera tropes that are pretty unusual to see in a game but aren’t exactly the highest form of storytelling and it all feels like its trying very, very hard to be nice and quaint while attempting to be a little bit subversive but rarely managing it.  That said, the characters do all have a personality of their own and that was good to see but they aren’t really that convincing, which might sound like an odd criticism of a game about mutants but is valid when the characters are otherwise fairly ordinary archetypes.  One particular, very Eastenders-style, story ends with one of the characters accepting it all in a way that was all bit unrealistic.  I get that this is a nice game but it didn’t feel like the storytelling was realistic (again, yes I know, mutants).

That said, you do almost immediately feel at home in this world and that’s probably a large part of why people love this game.  Not everything has to be dumb Gears of War style violence and indie games don’t all have to be pixel art misery fests and Mutazione does feel a like a breath of fresh air at times.  The story is all this game has though so I can’t go into too much depth.  By the end of it I felt like there was a fairly solid tale there but if this was a short story in a book or even the plot of a game that didn’t have this one’s art style, I don’t know if people would be so drawn to it.  Still, people loved Journey and that’s a game where literally only three things happen. 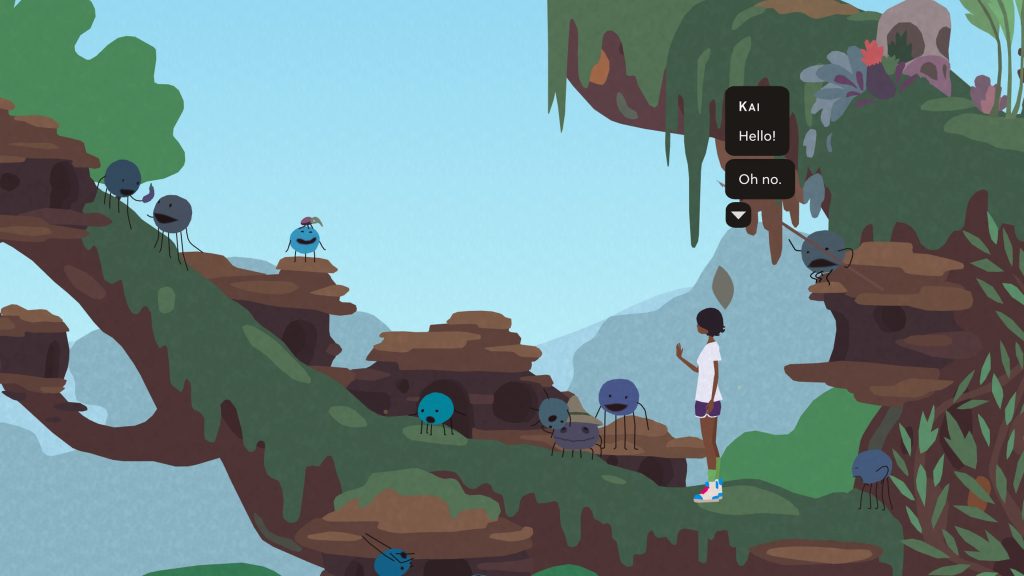 My main concern was with the gameplay, in so far as there really isn’t any.  This is evident from the controls which just have you running around or interacting with people with one button.  There’s a slower ‘walk’ command which has no practical use and so really this is a game you could play on an Atari joystick if you could figure out the wiring.  There are no real puzzles and certainly no arcade elements.  You just walk and talk for the most part.  The only element of difficulty comes from occasionally trying to find someone which can sometimes set you back ten minutes or so but even then you can still just talk to people and try to get a bit more plot out of them while trying to figure out that the girl who looks like a cat is hidden in a room above your grandfather’s shack.

Essentially the ‘game’ here is just to walk to your next conversation and that’s really it.  If you’re the type of person who loves a walking sim, then this might be for you.  But anyone wanting any meaningful gameplay will be disappointed.  There is a whole gardening thing where you plant seeds but short of advancing the story a few times, this is all pretty pointless.  You take a seed, plant it in a location in one of your gardens, play the melody that will help it grow and then harvest it.  I’ve seen people claim that this was something they lost hours too but I can’t see why.  It’s not like the plants even really do anything.  There’s no effects from them because there’s nothing to affect here.  You’re not going to be able to run faster, jump or do anything interesting.  You just plant what the story needs you to plant and that’s it.  Other games do the gardening thing way better. 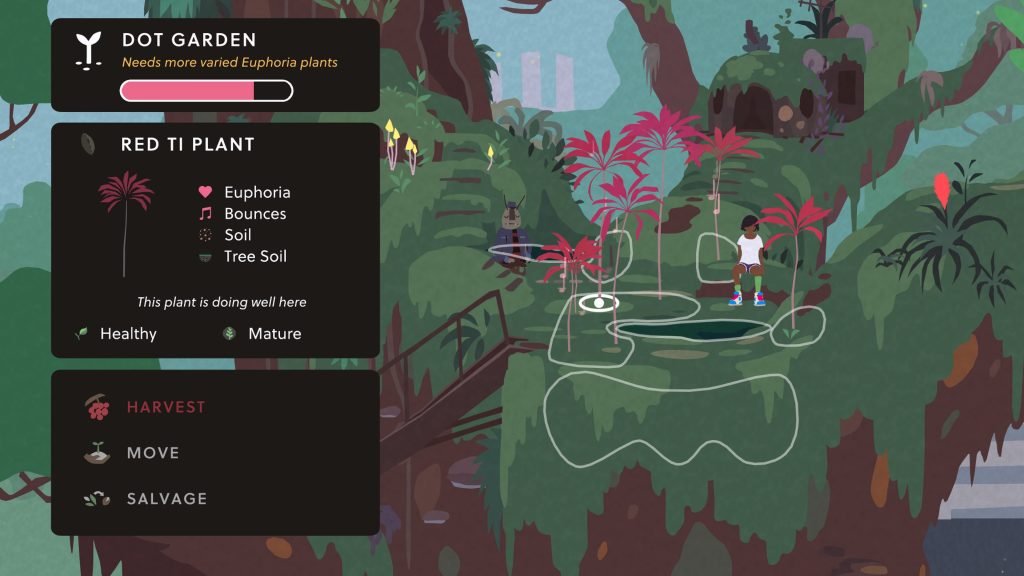 For me it was all a bit thin.  Too much tapping my way through seemingly endless conversations and not nearly enough gameplay.  At no point does the gameplay challenge you or even try to entertain you.  This is the kind of a game you could play on a touchscreen and not even end up irritated by.  As such you’d probably get just as much out of Mutazione if you watched a playthrough on YouTube.

The presentation is also getting a lot of praise elsewhere and I can see why to a degree.  The island is quite pretty.  Some will tell you it is stunning and that’s probably a little bit generous.  It’s nice and colourful but lacks detail given that it’s presented in flat coloured shapes a bit like how South Park pretends to be.   There are occasional moments where it all looks very nice, especially at the top of the map where the trees are but there’s nothing drop dead gorgeous here.  The music, which threatens to almost be a part of the gameplay but never is, sounds okay at times.  It’s all very off-kilter, almost formless kind of stuff like you’re hearing it a dream.   There are a couple of very odd but very excellent pieces of music in there though.  The highlight being a band performance in the game which is by far the best thing about the game. 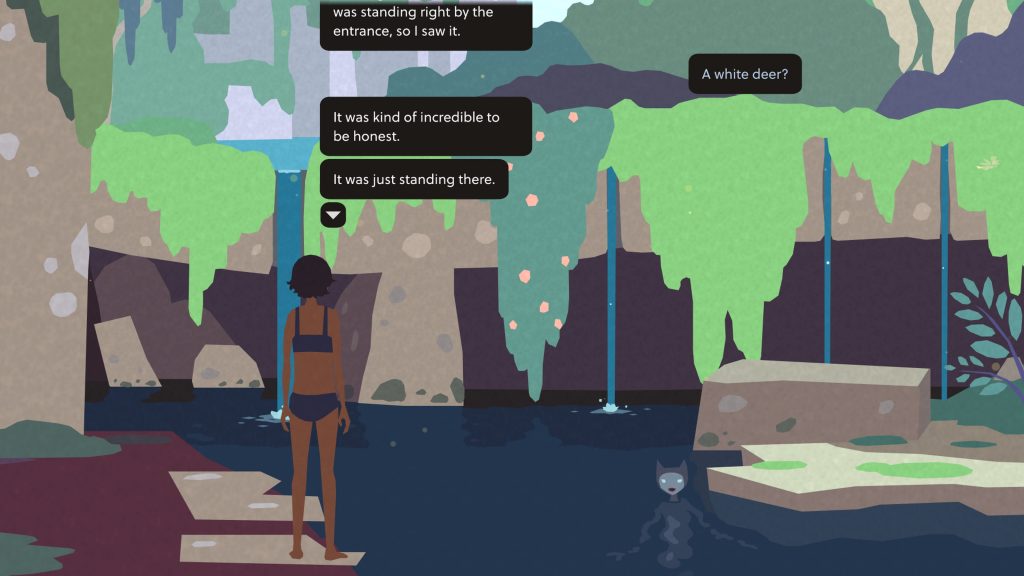 By the end of the game I never felt wowed by it but I was glad I had stuck with it, just to know how the story ends and overall it finishes strongly.  I’m not sure I ever cared too much about the other storylines in the game, and your grandfather’s explanations during the main story are a bit annoying to be fair (the game acknowledges this), but after five or so game days I did feel more engaged than I did at the start.  Oddly, last week’s Distraint probably had more of an impact on me emotionally (which was unexpected) and it is telling that that game only got one review listed on Metacritic (from us, naturally) and won’t get all these 9s and 10s that Mutazione is getting despite it being way more emotional and actually having some gameplay in there.  Not much but more than what you get here.

And so in the end Mutazione could be a ten to those of you who like this kind of thing or it could be a one if the idea of basically just pressing X a lot doesn’t count as gameplay to you.  I started out closer to the latter and had to force myself to accept the game and ultimately enjoy the whimsy but there are some of you out there that will see the reviews gushing about this game and if someone wasn’t around to tell you the downsides, then that would be money wasted.

Mutazione
7 Overall
Pros
+ Charming setting
+ Is just very, very nice
+ Interesting, likeable characters
+ Some good presentation
Cons
- Story presented as text boxes
- Little to no real gameplay
- Gardening feels tacked on and thin
- Graphics style takes away from the impressiveness of the locations
Summary
Mutazione is an intriguing adventure with a soap opera plot and may well end up being your game of the year but if you need your games to offer more than a bit of wandering around and a lot of pressing X to advance conversations then this might not be for you.

One thought on “Mutazione – PS4 Review”