As a public transport pleb, I’ve become accustomed to buses and rely upon them to get from A to B. Bus Simulator from Still Alive Studios gives me the opportunity to flex my logistic muscles and run a company from scratch. Originally a PC release last year, this niche title now finds a home on the current generation of consoles. 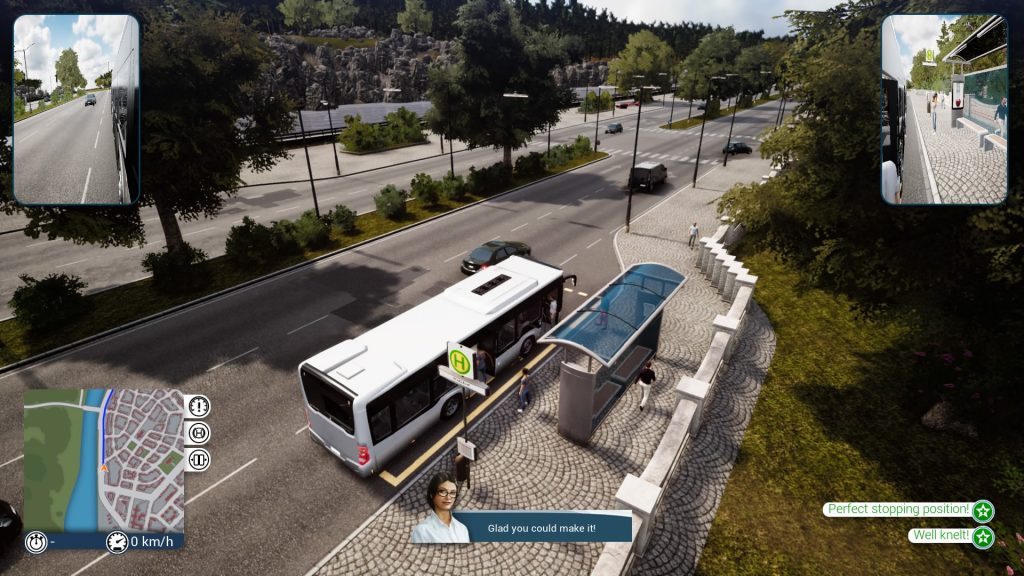 I’ve seen some complaints about the controls but, for me, they were simple to grasp. It throws you in at the deep end with you looking at the wheel for ignition switches, handbrakes and lights but the shortcuts on offer do the job just as well. There’s a radial menu on hand which also performs the more common tasks. You could always go deeper and a little more authentic but Bus Simulator knows when to hold back.

The career of building a transport monopoly is a little slow to start. You’re given a modest bus to begin with and, after devising and driving your routes, you have to begin building your customer numbers. Some objectives can lead to you to repeating routes to bolster your funding and, unfortunately, you cannot advance time without driving a journey yourself.

Once you’re settled, a routine becomes pretty clear. Missions often task you with building a route, driving it and then handing it off to a hired driver and vehicle. The money you generate from a route depends on how well you’ve handled it, compared with the skill of your chosen driver. It does become monotonous but the career itself feels relatively short. There’s ten missions with most of them taking an hour to complete. Bus Simulator does try to give you feedback by informing you which stops need to be part of a route or objective but it’s on you to pay the utmost attention. Spending half an hour running a route only to find you’re a stop short of the objective can be soul destroying. 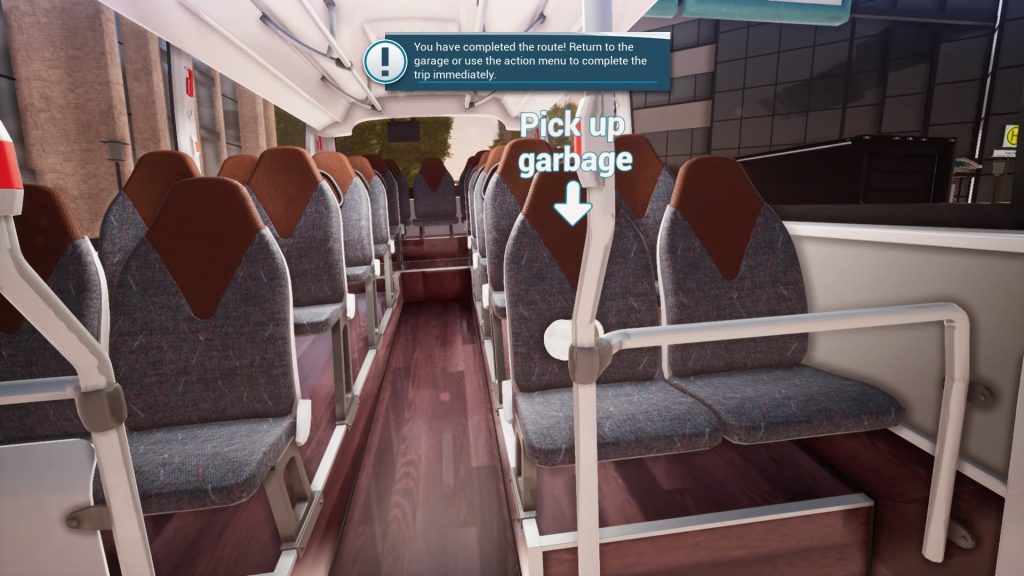 Each successful mission opens up another district for you to conquer and one of my favourite aspects is how your buses gain a presence on the roads. You have no competition and this little venture can quickly grow into something much larger. Bus Simulator does explain some of it’s eccentricities but it can lead to some head-scratching with mission objectives. You cannot generate income with a route until you drive it yourself. For objectives about generating money with a hired driver, this step is essential. On top of that, any routes you alter or extend need to be driven again before you can generate money off it.

On one hand, it’s a way to get you behind the wheel, rather than devoting yourself entirely to management but it does lead to a very deliberate, slower pace. Long sessions can feel like a grind, particularly with the missions following similar archetypes. I also don’t care much for the random events that trigger. Stopping a journey to tell a passenger to turn their music down or steer clear of the doors feels like a nuisance. At leas the multiplayer allows you to drag a friend on for the ride. I like how it’s handled with each person handling a route or dealing with the excess passengers from one bus.

The map itself is a little bland. It’s mostly flat in the urban areas with the suburbs starting to provide a little elevation. The town is at least small enough to allow for even the longest routes to last barely ten minutes at a time. Given how repetitive the routine can be, this is a godsend. The visuals don’t show much polish as objects pop into existence and the draw distance looks somewhat limited for a game about travelling. 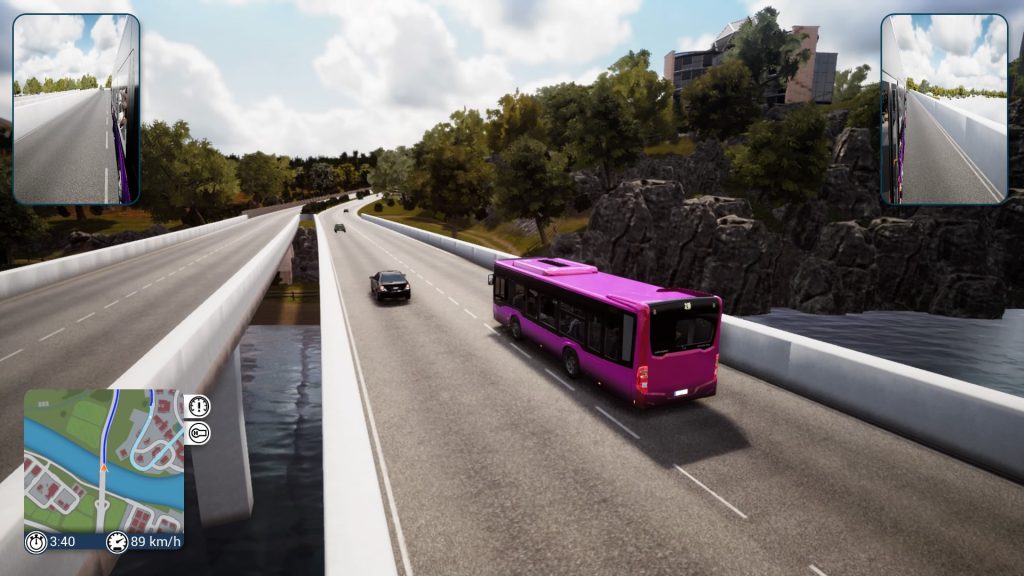 It’s functional and it does at least show some variation when you venture out into the sticks. The traffic and people make the map feel alive, although the illusion does break when some characters decide to freak out or wander off into genuinely strange places. Sometimes it can feel clockwork and a little soulless but your passengers do at least provide plenty of chatter. Some of the acting is a little exaggerated and, despite everyone having an American accent, their pinpoint pronunciations of German surnames and uses of German places do little to hide the game’s origins.

The extra attention gets paid to the bus models which are genuinely exquisite. There’s about a dozen models to choose from with different engine types, seat layouts and performance. They all sound fairly accurate and handle fairly well. Each district of the city has it’s own ambience and it does give a sense of a place in motion.

The standard Mercedes you start with is nimble and, to be honest, became the backbone of my business. The heavier, longer buses are harder to turn so I was trying to consider routes with this in mind. There’s something to be said about how this game makes you think about logistics. I did start to think about maximising money off a route. I was looking at one of the Iveco buses and scoffing at how few seats it had. Every time I’d drive past a stop I wasn’t covering, I’d wonder why. 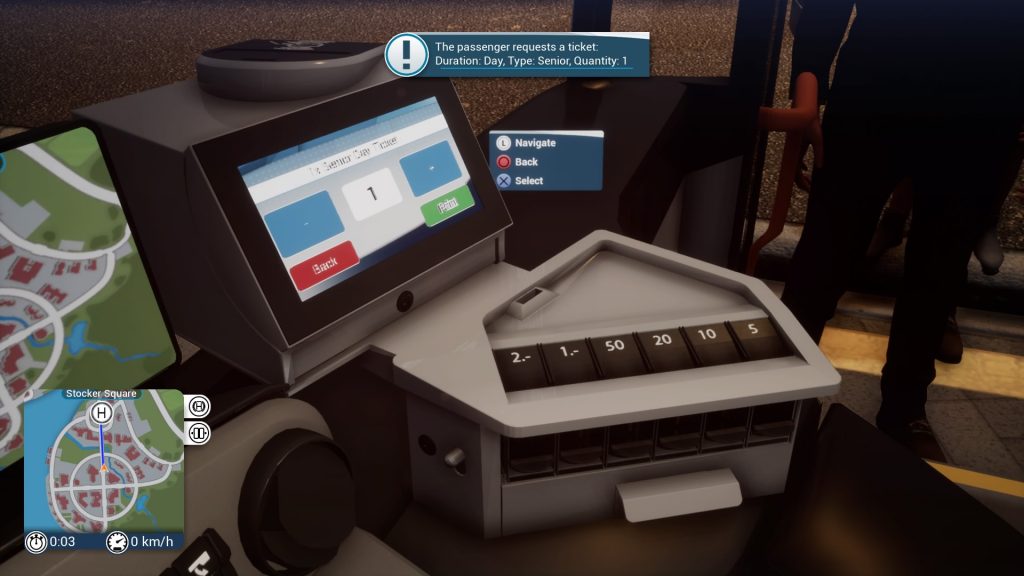 Technically, it struggles. It’s not game destroying but frame rate struggles to stay consistent. It’s more apparent in your mirrors but it keeps showing how on a budget this game feels. The game will occasionally stutter and hang in what are genuinely terrifying moments. You don’t want this game to crash on you given how frequently it saves in the background.

Feelings are mixed with Bus Simulator. It’s a chill time but some of the realities of bus driving do hit home. Traffic, hitting potholes and nuisance passengers can provide a little road rage. The mission structure does allow a slow transition from a fledgling company to a monstrous monopoly but it does degenerate into monotony.

Bus Simulator
6 Overall
Pros
+ A really enjoyable multiplayer mode.
+ Smart looking bus models
+ A mostly relaxing time.
+ Surprisingly accessible.
Cons
- Random events and traffic can cause road rage.
- Stuttering visuals and performance issues.
- The environment is rough around the edges.
- Missions can degenerate into a slow grind.
Summary
Bus Simulator takes the bus driving experience and presents it warts and all. At times, it's relaxing and satisfying to have a smooth journey, at others, it's a drudge to be caught in traffic. The career operates at a slow pace and, whilst short, your objectives all become very similar. Technically, the game struggles to stay smooth but there's a novel multiplayer on display that might provide longevity for fans.