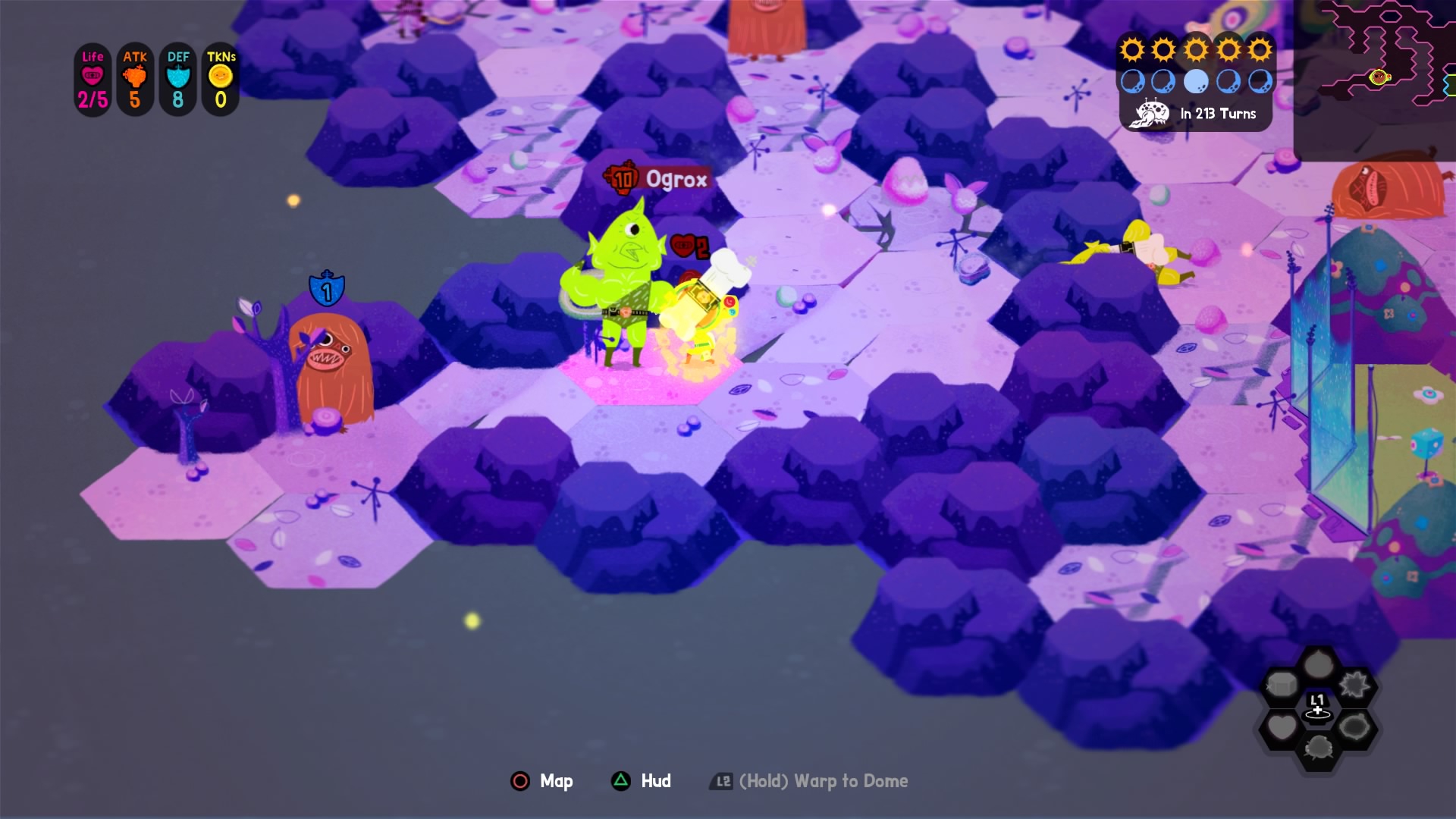 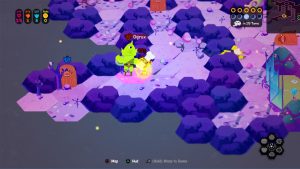 Loot Rascals is a game with bags of character.    The game has some strong indie DNA having been developed by some of the same team behind Hohokum and Super Exploding Zoo.  On the face of it you’re looking at another indie roguelike, but this game has an irreverent sense of humour to help it stand out from the crowd.

The game opens up with your character being woken from hypersleep to chat with your Scottish robotic pal Big Barry and his teapot shaped head.  A little bit of exposition later and you’re on your way to a space theme park to rescue Big Barry from an evil intergalactic tentacled beast and an army of bizarre bad guys,  talking about the story makes me realise how amazingly ridiculous this is.  The opening cutscene demonstrate an off the wall humour which made me grin all over.

Loot Rascals plays from an overhead view point, and the levels are created out of hexagonal tiles covered in a fog of ware style affair.  The fog gradually recedes as you move about, but what this means is that you don’t know either the layout of the level or where the bad guys are going to be.  This gives the game a nice little sense of exploration and discovery.  Movement around the map is handled in an odd quasi turn based system, I last saw this same style in Quest of Dungeons which was another rogue like indie game I rather liked.  What this quasi turn based system means is that every hexagon you step on takes one turn, and the enemies also then get a turn.  There is no pause between movement though, and effectively you just run around as normal. 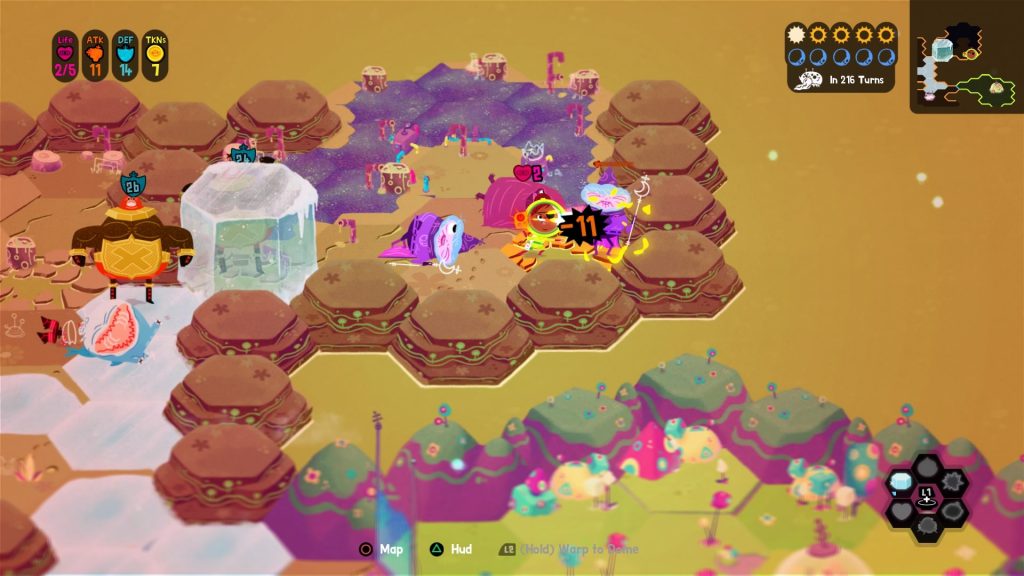 The turn based nature of the game plays out in two major ways though.  Firstly Loot Rascals has a day/night cycle which changes every few turns.  This serves a gameplay purpose as the various enemies encountered are more dangerous in either the day or the night, and if you bump into them during the wrong time they will get the first hit and be significantly more difficult to defeat.  The second element here is that each stage has a turn counter which reduces after each movement. Should this turn counter get to zero then enemy reinforcements  will appear.  These reinforcements are a whole new threat and can seriously scupper any run.

Combat in Loot Rascals is completed automatically when you bump into an enemy and based on your various stats. You can improve these stats by collecting cards dropped from defeated enemies, and you then get to lay these out on a grid of ten squares.  The management of these cards brings a nice element of strategy to the table as often a card will have unique properties, such as increasing the stat of the adjacent card or gaining a bonus if placed on a certain row.  These cards can be traded in for the chance to heal, but this needs to be done at your home base and whilst you have the ability at any time to warp home this comes at the cost of a 25 turn penalty so this decision will hasten the enemy reinforcements. 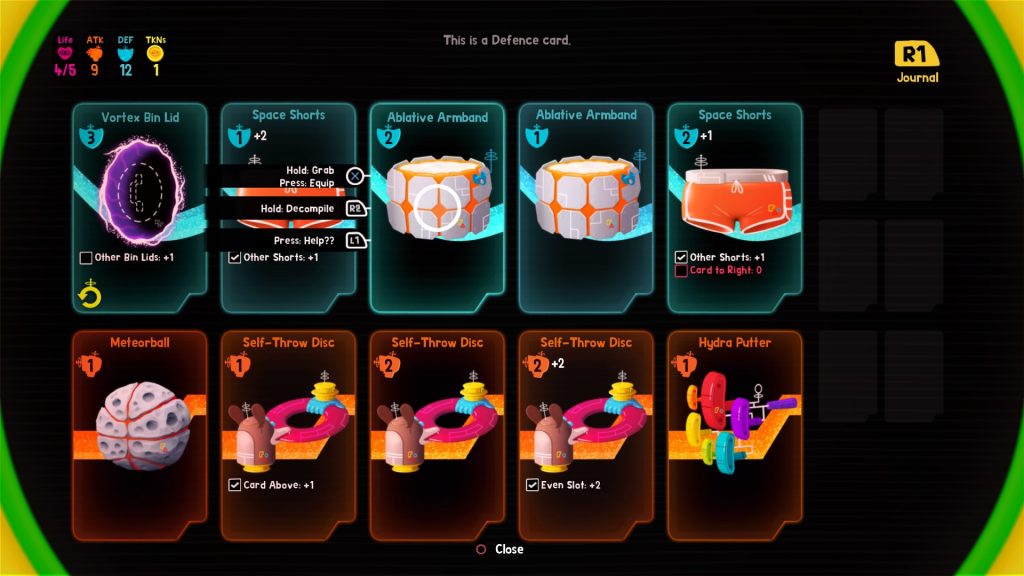 The cards you pick up can also grant projectile attacks and other ranged effects, this is a nice addition to your card management as these ranged effects need to be added to existing cards.  Managing the placement of your deck is a key strategic concern and is enjoyable enough to do.  It always feels good to get things lined up in an optimal arrangement. However being a roguelike these drops are randomised, both in terms of frequency and content.  You could get lucky and receive some great cards early on, but then again you could get seriously unlucky picking up trash.

Given this random aspect progress through the game is largely down to luck. If you’re lucky enough to get decent cards at the start then you’ll be well positioned to steam roll through the enemies, get a run of poor cards though and the game takes a decidedly more difficult turn.  As a true roguelike no progression is carried forward to your next run and as such the game can swing wildly from a decent run through to easy defeat.

Aside from the main story mode there is an online ranked daily challenge mode where you can compare scores across a leader board, which is decent if you’re into chasing scores.  More interesting to me though is the seeded mode where you can enter a string of numbers to replay any particular previous run.  What this means is that if you had a particularly enjoyable run, providing you write down the seed, you’ll be able to go back and play this variant as often as you want.  It’s a brilliant idea which removes the randomness from the game and allows specific runs to be learnt and mastered if you want to. 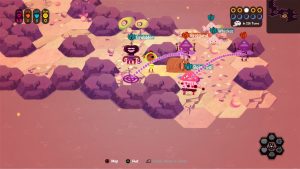 Loot Rascals then is a decent roguelike with a very unique sense of humour.  The sci-fi setting and the absurdist characters allow this to stand out from the general swords and sorcery crowd and give it a memorable style.  The very random nature of the levels and pickups means that far too much of the game is dictated by luck, but the ability to seed specific levels to replay is a brilliant addition.

Loot Rascals
8 Overall
Pros
+ There is a really fun sense of humour and a decent style + The card system of powerups is great + The ability to seed specific levels is a brilliant addition to the genre
Cons
- Over reliance on luck - It can be very difficult sometimes - Some people just won't get the humour
Summary
Loot Rascals then is a decent roguelike with a very unique sense of humour. The sci-fi setting and the absurdist characters allow this to stand out from the general swords and sorcery crowd and give it a memorable style. The very random nature of the levels and pickups means that far too much of the game is dictated by luck, but the ability to seed specific levels to replay is a brilliant addition.