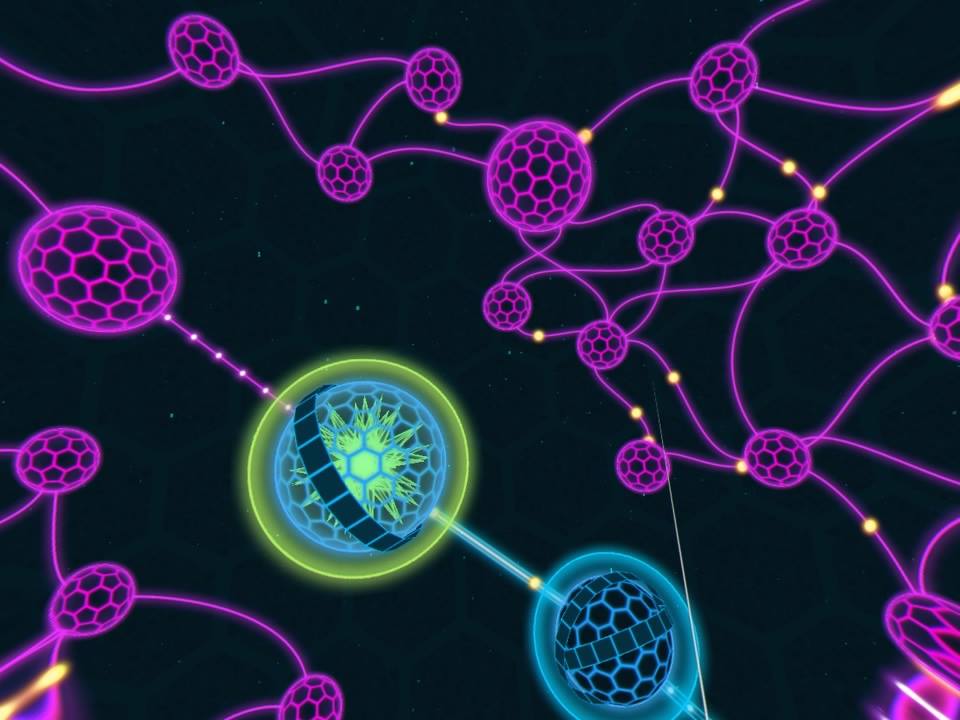 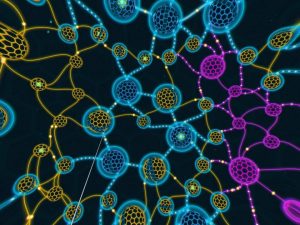 Hacking is one of those gameplay elements that has suffered from poor representation. Whether it is the one button mundanity of Watch_Dogs or the Pipe Dream aping moments in Bioshock, developers seem to be having a bit of trouble finding the right balance between simple to understand mechanics and the complexities of pilfering data from a high security network.

It is true that the odd concession can be made, particularly in the examples above as they form a small part of larger, more involved titles. However, games that focus solely on the technological espionage face the insurmountable task of making not only a fun game, but one that makes walls of 1’s and 0’s seem appealing. There has been some success in this field before with the likes of Rez, but even that was stylistically removed to the point that you can barely tell that this is the core reason for play.

Enter Darknet. A game that is expanded on a title created at an Indie VR game jam for Oculus called Ciess. The game takes its inspiration from the core tenets of Hollywood depictions of hacking and makes it playable with an easy to read interface. Primarily a puzzle title, your goal is to dive into networks which are represented by honeycomb structures on a grid. It is your job to plant a virus on various antiviral nodes which creep to the core programming so you can take this over. Getting in your way are the unselected antivirus nodes that when triggered will pulse along your captured strings and put a stop to your encroaching software. 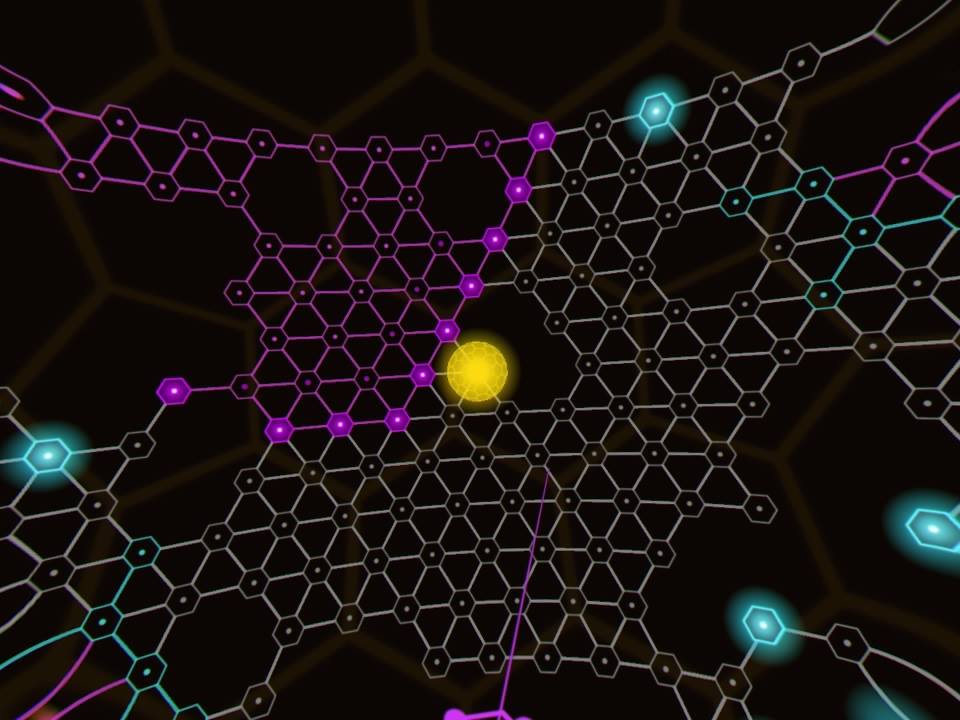 Each of the honeycomb puzzles are part of a larger, almost bacterial looking network which is shielded with firewalls and umbilical sentinel programs for you to overcome. These nodes can be attacked from any angle and this rewards the player with a lot of choice from the start. Each round is timed and to beat the limit you need to take out master node which holds the data that your clients are paying for. To help you on your way you have access to a store which grants you access to additional virus’s and other programs such as exploits and hydras that allow you to essentially cheat your way through a system. Exploits allow you to break down the shields surrounding a node so you can tackle harder Sentinel nodes faster and hydras automatically convert all the unshielded minor and sentinel nodes automatically, allowing you to focus your attention on more pressing obstacles.

What results is a neat and compact game filled with a lot of mini puzzles that range from the easy to the dastardly. Easier and smaller programs may just need the correct placing of a singular virus so that you can take a core. Shielded nodes and sentinels require more strategy as they may have green shields that halt the progress of your virus or may require you to sacrifice a few viruses to wipe out the security programmes before you fire off another to take a core. I found this part of the game exhilarating while taking the time limit into account, it forced me to think on my toes while concisely planning an overall attack move for the wider network puzzle. 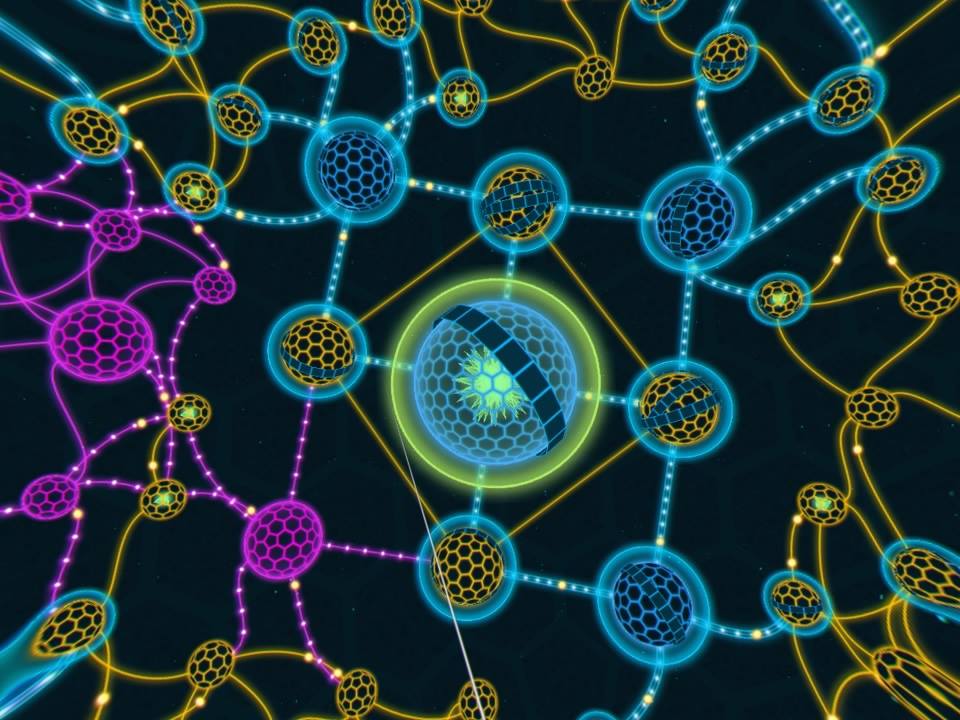 The best part of Darknet for me was the feeling that each of the mini puzzles felt like they had no particular wrong answer. When you gather strength and resources with extra viruses and exploits you can essentially carve your own path throughout the network. The game is as difficult as you make it with this in mind and the nature of the puzzles lead to the possibilities of being able to capture master nodes early in a cycle, should you be up to the challenge. It’s a nice change of pace from other more constricted puzzle games and the loose feel made me feel like i never was out of my element.

In regards to the VR in Darknet, this isn’t one of the experiences that you would showcase to your friends. The reason being is that it lacks the immediate wow factor that you would expect in the first year of VR in general. While the ability to look around the inside of a globe at the bacterial style network and look around to plan an attack it is often hard to escape the feeling that this could have been done on a two-dimensional screen as well. I feel that this could mostly be an issue with the PlayStation VR style however as your cursor is the lightbar on your Dualshock 4, this stops you from being able to stand up and turn a full 360 degrees as of course the camera is only able to pick up a light source. For this and seating mode you are forced to use the sticks on your pad to turn the network around to make your plan of attack, it’s a limitation that ruins the magic a bit. 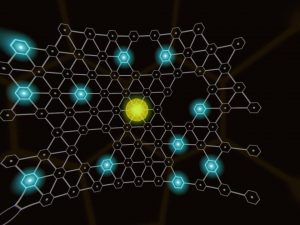 Tracking can also be a problem if your setup is prone to these sorts of hiccups. When selecting a puzzle, you may be looking at a certain direction. The game then locks to that direction which can cause some issues with the shifting viewpoint when you do get to the mini puzzle screen. It can be annoying, however thankfully it does not fully break the experience or get in the way with the core action. If these issues are to your chagrin then feel free to drop the score one point, however i do not feel that Darknet should be punished for something that isn’t its fault. What remains barring these odd hiccups is a fantastic puzzle title that is great fun to dip in an out of or marathon.

Darknet
8 Overall
Pros
+ Fun and simple gameplay that rewards strategy and speed + Brilliant soundtrack with satisfying pulsing sounds when you initiate virus’s + Very moreish
Cons
- Lack of 360-degree gameplay due to hardware limitations may be an issue for some - Not that much variety (but what it does it does well) - If your headset suffers tracking issues then you may find yourself adjusting your position a lot
Summary
Darknet is a simple and fun puzzler that comes closest out of many to providing a fun hacking game. It may not be the best showcase of the PSVR hardware, however it does make for a good diversion for whenever you are stuck between games and have the visor affixed to your face. One for puzzle fans who are looking for something a bit different on PSVR.