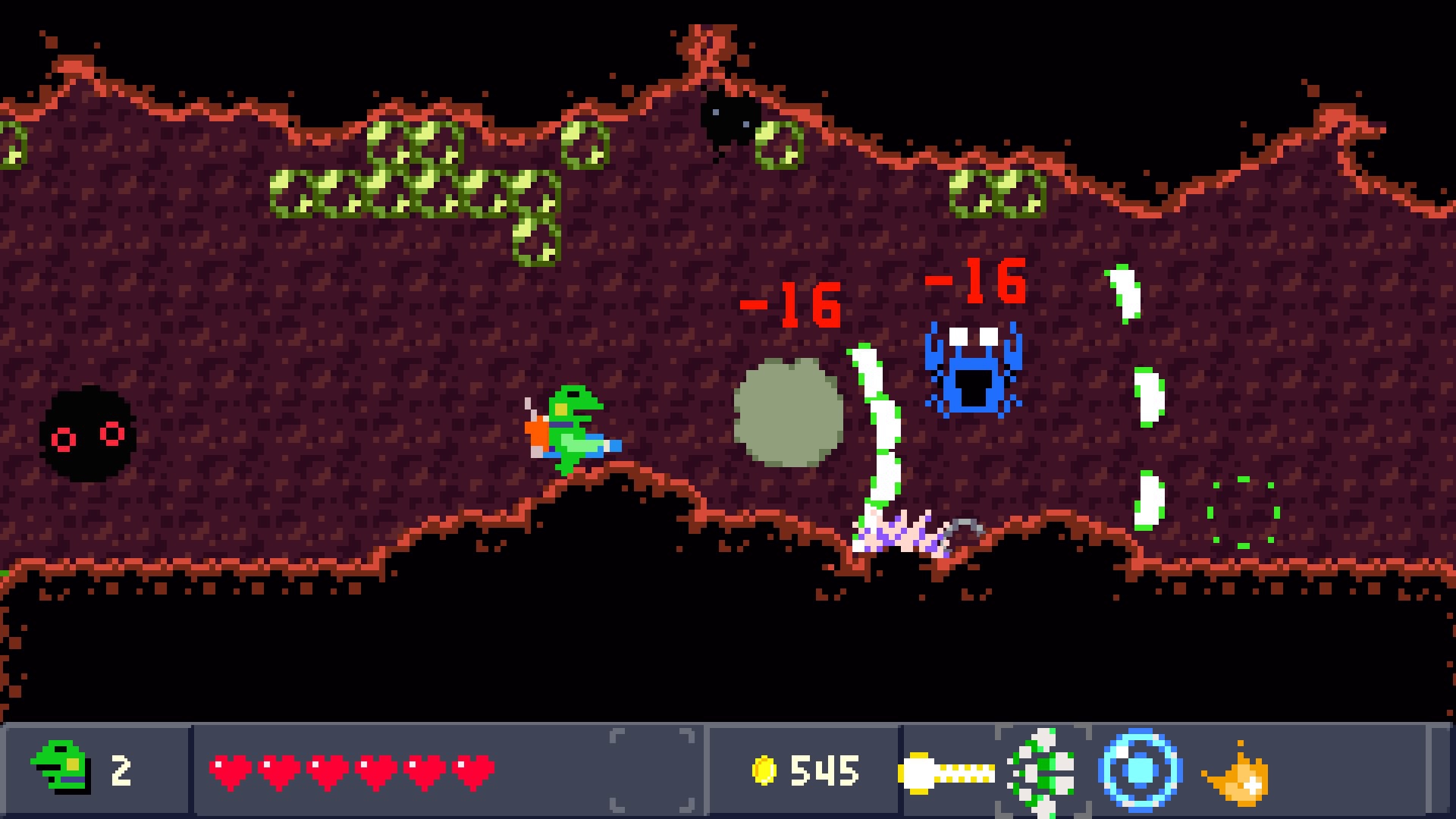 Kero Blaster is the next game from the indie developer Daisuke “Pixel” Amaya, the Japanese developer  known to many as the same guy who made Cave Story. Kero Blaster is his first big release since then and was originally released back in 2014, now making it over to the PlayStation 4 you’d be forgiven for thinking this looks a bit…well retro.

It would be easy to write Kero Blaster off as taking the retro indie thing too far when you see the screenshots.  It looks retro as hell and would sit happily alongside any number of NES games. However dismissing the game purely on visuals would be to miss a very interesting game. 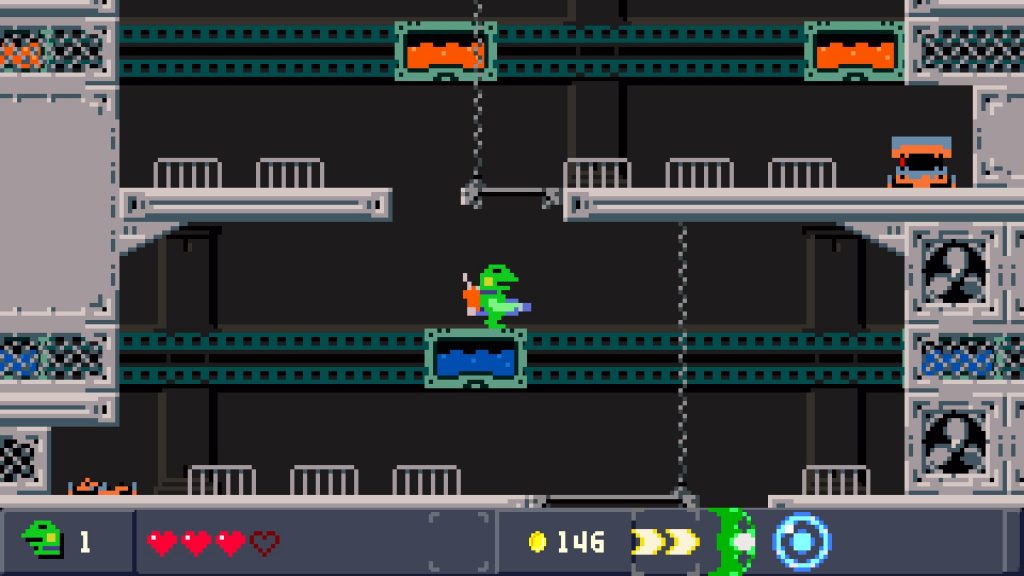 Playing as a platform game Kero Blaster see you controlling a happy frog as he goes about his day job of shooting things in the face. Controls are purposely kept simple with just a button to jump, a button to shoot and the ability to cycle through five unlockable weapon types. There are seven levels to blast through and loads of bosses and mid bosses along the way.

Given that the game frankly isn’t going to win any awards for its visuals, its down to the gameplay to do the taking. Luckily Kero Blaster plays a mighty fine game with crisp controls, a novel sense of humor and some decent challenge. It all comes down to the shooting here and as you work your way through the levels holding fire will lock you in position as you shoot, meaning you’re able to shoot and walk backwards or shoot up as you move left and right. These classic controls allow for a surprisingly lot of fun and Kero Blaster seems to have polished the shooting to near perfection. 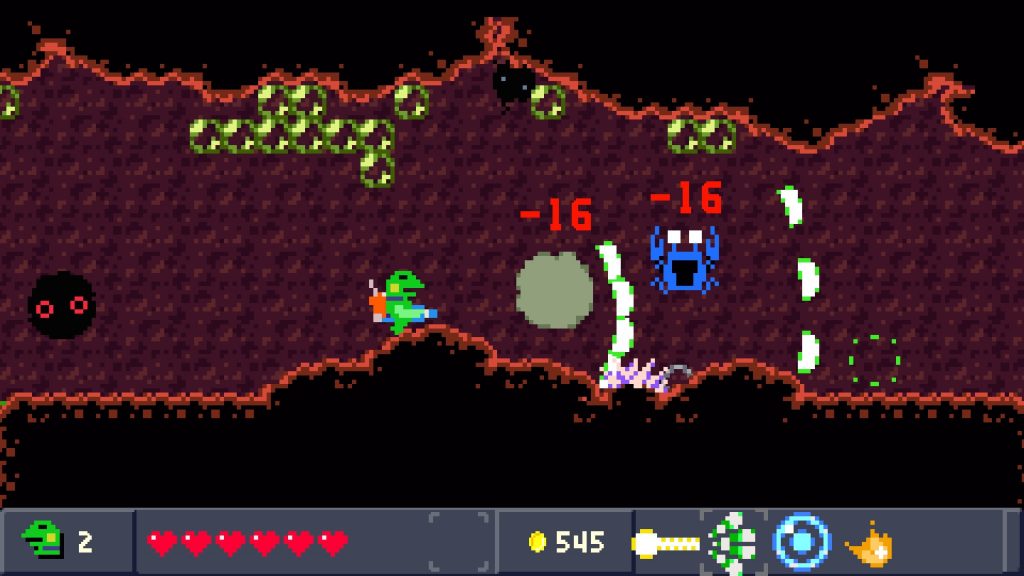 There is an odd sense of humor running throughout this game.  I mean you play a frog who works for a company called Cat and Frog who seem to have some sort of teleportation come extermination business.  The enemies you’re tasked with getting rid of are all kind of cute anthropomorphic creatures and you can run around on the title screen before the game even starts. All these little things add up to a charming oddball sense of humour which is present throughout and pretty endearing.

Particular attention needs to be drawn to the brilliant music. It feels like a classic score and each tune has that earworm quality. It is all chiptune and repetitive like the best scores from the NES era.  If the best form of flattery is imitation then Kero Blaster must love these old games. 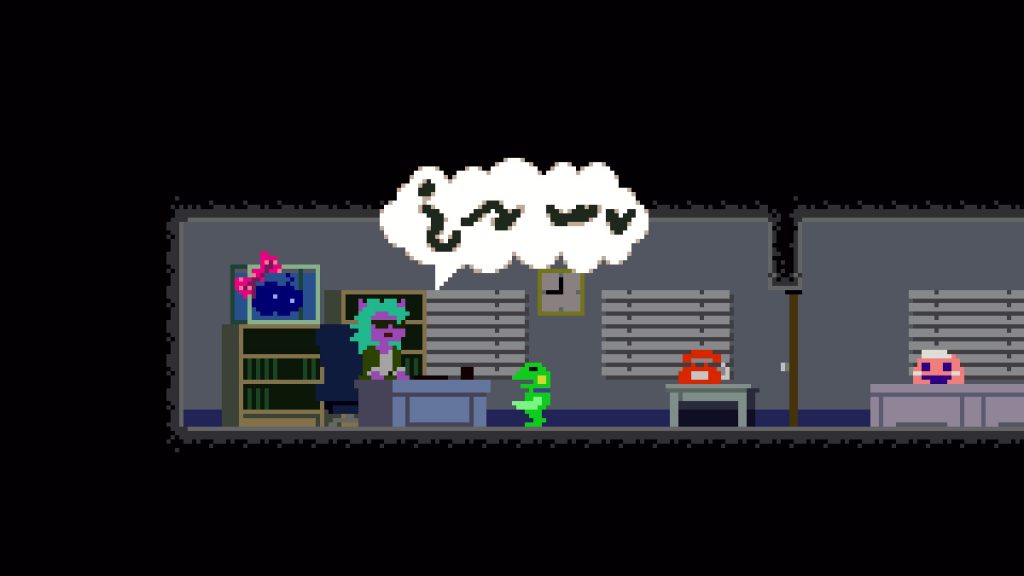 As far as difficulty goes Kero Blaster is definitely tricky, but makes concessions to modern gamers in the levelling up loop. At the start three hits will see you shuffle off this mortal coil, but you’ll be resurrected in a hospital with the ability to spend the coins you’ve collected on weapon upgrades and additional hearts. The weapon upgrades in particular are will implemented and make initially puny weapons feel brilliantly powerful once upgraded. The coins carry over through deaths as well which mean any tough sections will eventually be overcome with a little grinding. After the first playthrough a higher difficulty setting and a boss rush mode is unlocked, adding more challenge if you want. I personally found the standard difficulty to be about right and I never came across any unfair spikes during the three to four hour running time.

Kero Blaster then is a surprisingly enjoyable game to play. The graphics and retro music work together perfectly to give the game a style not much seen nowadays. While this graphical style may not be to everyone’s liking happily the core running and gunning is tight and it is this aspect which will keep you coming back for more.

Kero Blaster
8 Overall
Pros
+ Tight controls and shooting have been polished to near perfection
+ Interesting retro style certainly stands out from the crowd
+ Excellent music
+ Decent level of challenge
Cons
- It may be too retro for some
- It isn't a massive game
Summary
Kero Blaster is a surprisingly enjoyable game to play despite looking retro to a fault. The graphics and excellent music work together perfectly to give the game a style not much seen nowadays. While this graphical style may not be to everyone's liking, happily the core running and gunning is tight and it is this aspect which will keep you coming back for more.