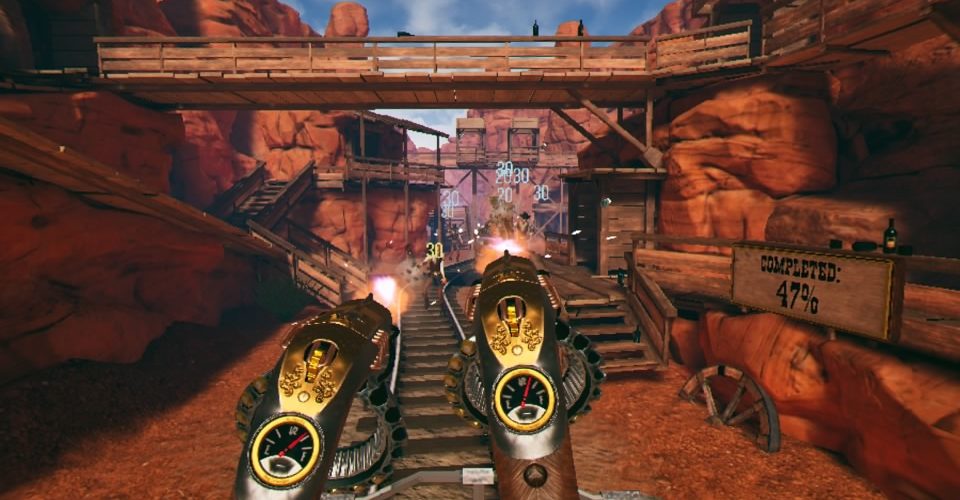 Another PSVR game, another wave shooter.  If that sounds a little uninspiring then this western-themed shooter from Ukraine’s MiroWin VR might surprise you thanks to the two main elements of the game, both of which are right there in the game’s title:  Guns ‘n’ Stories.

The second half of that is the ‘stories’ part and that’s one of the game’s best features.  You play as Bill, an old-timer who is bribing his grandson to bring him drinks of whiskey from the kitchen by telling him some tall tales of his exploits back in the Wild West.  These stories are introduced via cartoon cutscenes played out on a cinema screen (you even have some virtual popcorn to eat as you watch them) and then as the game properly plays out, the action is shaped by Bill’s fanciful story leaps based on his grandson’s suspicious questioning.  So when asked “wait, you took on a whole army with your revolvers?” Bill will suddenly invent a new weapon that you’ll finish the level with. 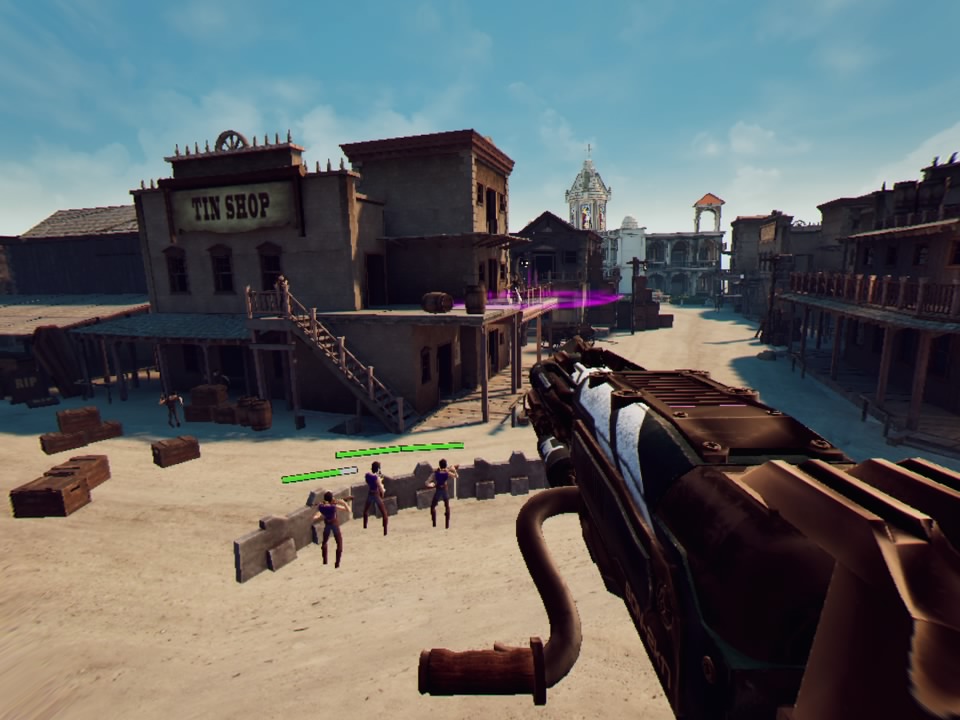 That leads us to the ‘guns’ part.  Yes, this starts off as a standard wave shooter with you wielding a couple of revolvers (controlled via mandatory Move controllers) but Bill’s whiskey-fuelled imagination soon conjures up a whole new armoury with tesla guns, grenade launchers, anti-gravity guns and a whole lot more.  There are nine main levels and eight of these introduce new weapons and they are always fun to play with.  Sometimes you’ll be dual-wielding and other times you’ll have two handed weapons that you’ll aim by holding your lead hand forward as a pivot and will then move the rear hand around to aim.  It takes a tiny bit of adjusting too but you’ll soon get the hang of it.

A neat touch to the gameplay, and that probably plays into the ‘Bulletproof’ subtitle the game has, is that Bill can dodge and block incoming gunfire.  It’s a little bit like the system employed in Superhot VR.  Bullets travel towards you at reduced speeds and you can physically move out of the way or use your gun as a shield to block them.  Enemies will take position all around you though and are relentless, so you can’t rely on this all the time but if you can get your head around multitasking between attack and defence, the game makes you feel like a badass.  It doesn’t do it as well as Superhot VR but we are always going to be happy to see games riff off of that game’s ideas. 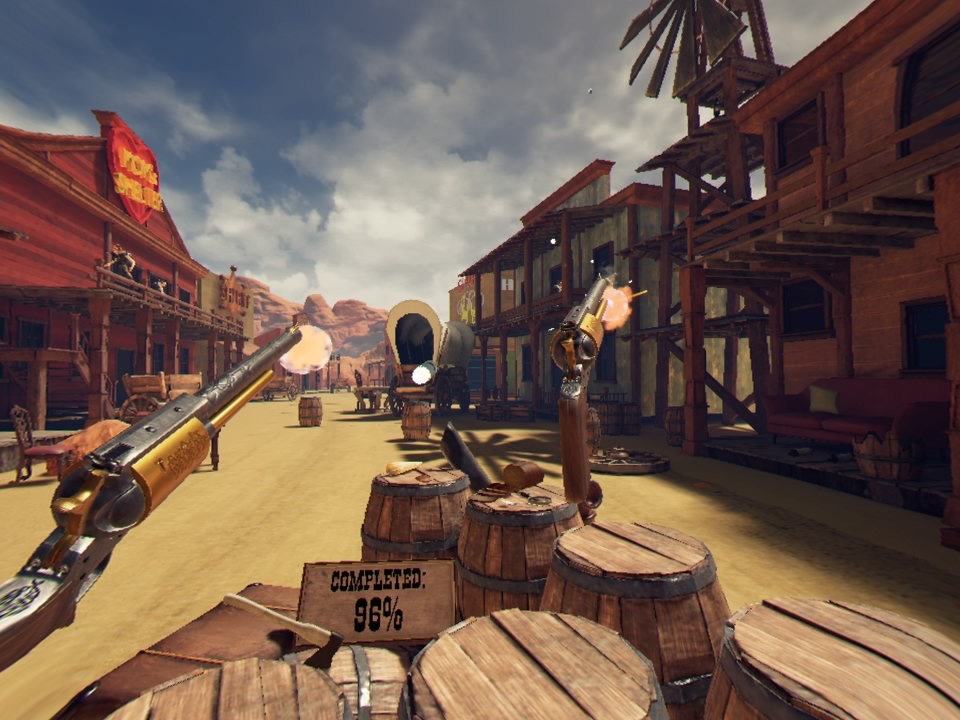 When it comes to dealing out damage, precise aiming can be tricky.  A lot of PSVR shooters use laser sights but Guns ‘n’ Stories: Bulletproof doesn’t and you’ll often be using your own missed shots as markers to make adjustments with.  If you can get into a flow and start picking off consecutive headshots, you will feel like the absolute legend Bill thinks he is but it takes some practise and this isn’t helped by the game’s messy graphics which were so indistinct initially that it had us looking into the configuration options of the PSVR headset itself.  PSVR graphics are never great but these are some of the ugliest.  Not in terms of design but just in terms of the lack of optimisation.  Trying to pick out details can feel like you’re looking through slightly frosted glass at times.

For the game’s two or so hour lifespan, we were definitely entertained.  The stories are engaging and it was always fun to see what weapon was coming next (and they never disappointed).  The game’s final boss is great too and so we were left very satisfied by the whole thing, even if the levels themselves did drag on a little longer than we would have liked.  We did struggle with some difficulty spikes though.  Having not died at all on Normal for the first few levels, we then hit a difficulty spike some 90% into a level which led us to drop the difficulty right down to Very Easy.  There are no checkpoints in the levels either so when you die it’s back to the start of that stage and this was definitely annoying at times, especially on the final level. 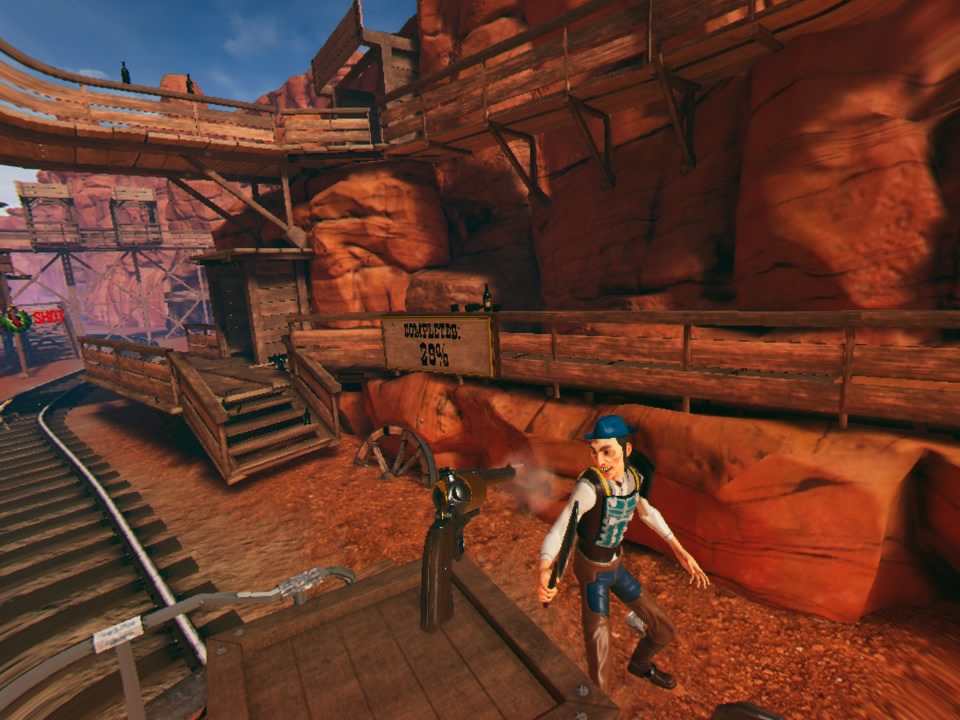 Where Guns ‘n’ Stories really pays off is in the atmosphere it creates.  It was a pleasure to review this one as it surprised us a few times, had a great sense of humour and plenty of fun weapons to try out.  The voice acting really brought the story to life too and we’re glad that MiroWin didn’t skimp on this aspect of the presentation and actually the sound throughout is excellent with some bombastic music on offer and decent 360 degree sound which was vital to us being able to pick off sneaky enemies coming at us from the sides.

The game offers some extra modes that beef up the package a little and there’s plenty of reasons to replay the game if you like going for trophies as this game has an exhaustive list of them.  For us though, this will be one of those games that we’ll dip back into now and again and will show off the next time someone points at the headset and asks ‘what’s that?’ because while Guns ‘n’ Stories does disappoint visually, the overall package makes it a good game to show VR off with.

Guns 'n' Stories: Bulletproof
7 Overall
Pros
+ A nice, inventive take on the wave shooter sub-genre
+ VR used well to give an awareness of where enemy bullets are at
+ Good sense of humour
+ Lots of fun weapons to try out
+ Doesn't overstay its welcome
Cons
- Graphically poor
- No checkpointing on levels and inconsistent difficulty levels
Summary
Guns 'n' Stories: Bulletproof is an enjoyable PSVR wave shooter that offers humour and chaos in equal measure and that sets it apart from the dozens of slightly similar games that are out there on PSN. Superhot VR remains the best the genre has to offer but this is in a respectable second place position.