Scintillatron 4096 is a twin-stick shooter from Dorset-based devs kFunction and it’s not exactly what you might expect. While the genre dates back to Robotron 2048 (which is clearly an inspiration for this game just judging by its title), it got popularised by Geometry Wars and aesthetically Scintillatron 4096 shares a few things in common with that game. However, this is a much more organised and considered shooter which has elements of Ikaruga in it as well as the more standard gameplay mechanics you’d expect.

You’ll be controlling the action in the usual way with movement mapped to the left stick and firing mapped to the right (or the DualShock’s face buttons but for sure don’t do that). There are no other controls to worry about and you’ve really only got eight directions of firing rather than the usual 360 degrees. 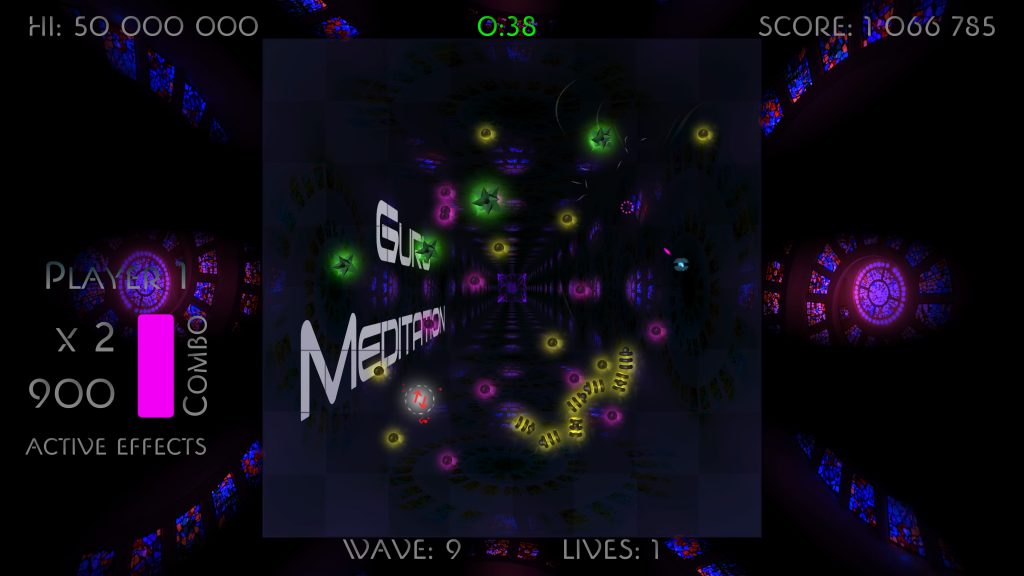 The aim of the game here isn’t just to destroy any threats to your three lives but rather there is an emphasis here on score chasing and to do that you need to ‘combo’ your way through levels. A combo is built by shooting enemies of the same colour. The game has trophies requiring you to combo 50 and then 100 enemies but each of the game’s levels has around 25 enemies in there so you’ll have to stretch it out over multiple levels.

You’ll lose your combo if you accidentally shoot the other colour and so you’ll need to be very picky with your shots if you want to trouble those leaderboards.  This is where the game feels like an entirely different proposition to usual twin-stick shooter.  Instead of spewing out as many bullets as possible, you now have to be more of a sniper (especially if you want the end of level bonuses for perfect play and finishing the level with ten seconds or more left on the clock.

A clock?  Yep, there’s a time limit on each level and if you haven’t cleared the screen, enemies will spawn in and start to hunt you down more aggressively so you can’t afford to take your time. Also, as the levels progress you’ll have additional enemies and threats to deal with during normal play which mean you can’t just stick to combo building.  Enemies in the game generally take a fair amount of damage and so you’ll really have to manage them as much as you do your combos. 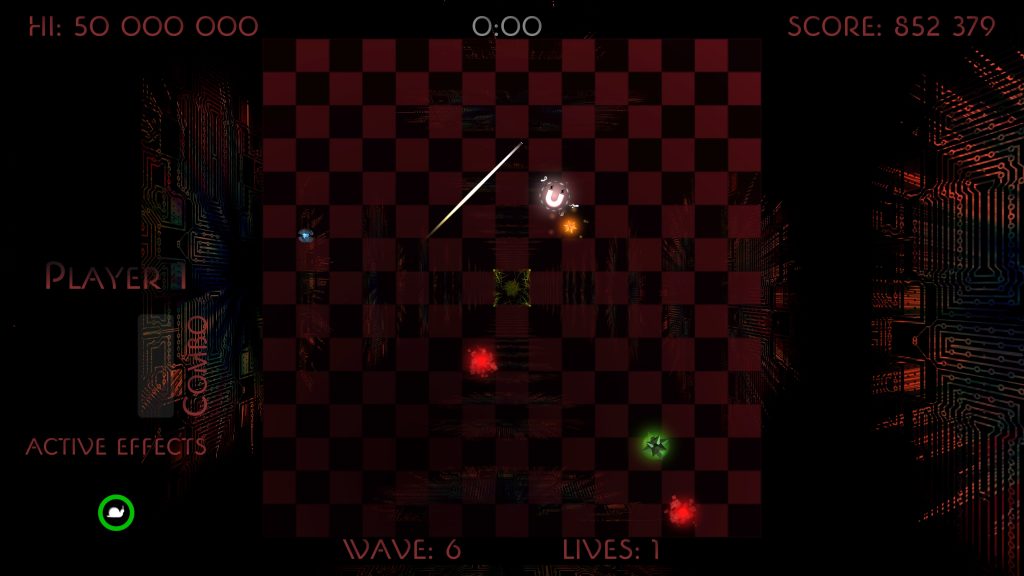 The game also throws plenty of power-ups (and downs) at you and these are very much a mixed bag.  Normally in a twin-stick shooter a three-way gun is a very welcome addition to your arsenal but here it’s only good for screen-clearing but won’t do your scoring any favours.  Likewise, the laser (which penetrates multiple targets) is also too risky to use if you want top points as there is a good chance you’ll accidentally catch an enemy of the wrong colour if you aren’t incredibly diligent with it.  Indeed that goes for the whole game really.

It’s a different approach to this genre and it takes quite a few goes to get used to but when you do, the risk vs. reward mechanics do make this more than the sum of its parts.  As a straightforward twin-stick shooter, this wouldn’t really cut it.  The action feels too staid, the firepower a bit too weedy but the scoring system does work really well and makes this a much more captivating title than we first thought.  We mentioned Ikaruga in the first paragraph and mainly that’s down to the colour-based combo system on offer but Scintillatron 4096 also shares another trait with Treasure’s famed shoot ’em up and that’s the fact that the game’s base difficulty is a little at odds with the scoring system because, pretty quickly in, the game’s difficulty will lead you to start focusing on survival way more than point-gathering. 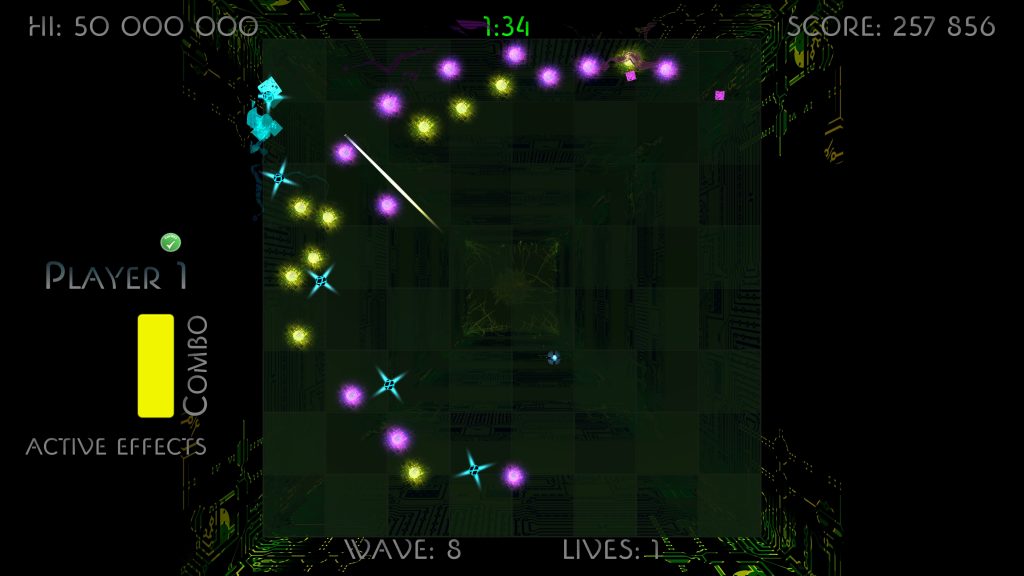 Better players than us will thrive though and we need to practise and Scintillatron 4096 is a game that is addictive enough to keep you coming back.  Not for the shooting action as such but because you know your comboing can improve and with the game’s weighty trophy list, there’s always another trophy just around the corner if you can get it.

When it comes to presentation, the game is quite a mixed bag.  On the one hand the enemy design is very basic and the backdrops aren’t particularly impressive but the game does have a stylish, clean look to it with the transitions between the levels looking particularly good.  The music is what you’d expect, the usual electronica, but it all comes together as a package and actually Scintillatron 4096 is reasonably swish on the PS4.  The Vita version also looks quite nice on that lovely OLED screen too but it’s not quite in the same league as Stardust Delta or Geometry Wars 3 on either format. 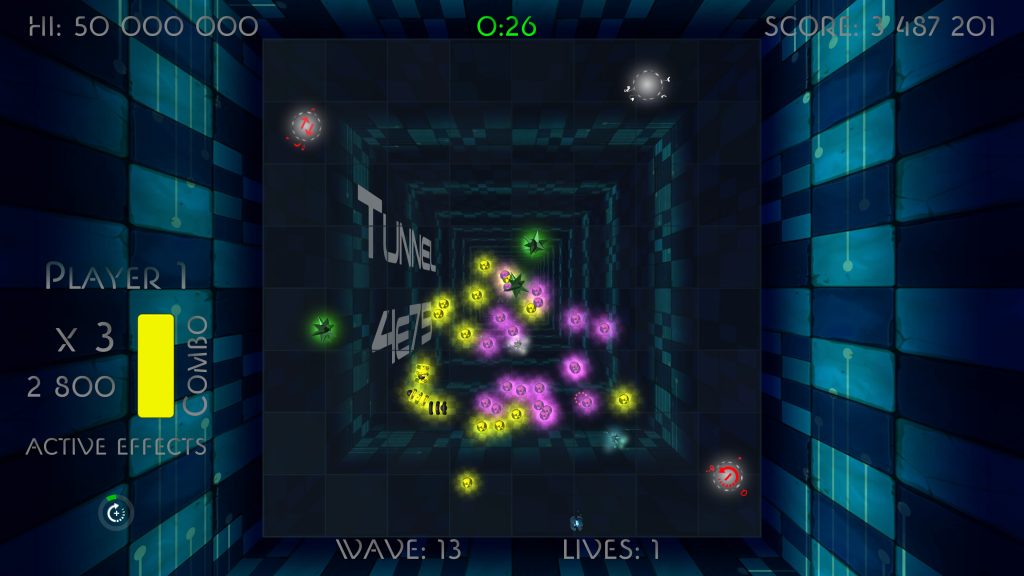 There are plenty of twin-stick shooters on PSN and we’ve review the majority of them and had thought we’d seen everything the genre has to offer so we’re pleasantly surprised by Scintillatron 4096‘s more refined style of play and will be sticking with it long after this review is published.  It’s a shame that the Vita and PS4 versions have different trophy lists and aren’t cross-play as we’d like to be able to take our progress out on the road with us (or at least to our day jobs) but we appreciate the fact that kFunction are helping to keep the Vita alive too.

So in conclusion, don’t pick up Scintillatron 4096  expecting to be able to spew out more firepower than the average American high-schooler and instead be ready for a taxing shoot ’em up that will offer  slower-paced action that will nonetheless challenge long-time fans of the genre.

Scintillatron 4096
7 Overall
Pros
+ Good scoring system
+ Offers a serious challenge
+ Cross-buy
+ Sharp visuals
Cons
- Not as action-packed as other games in the genre
- Maybe a tad too tough
- Fairly repetitive
Summary
Scintillatron 4096 wears its arcade influences on its sleeves but has more than enough of its own identity to carve out its own path. It may not be the most spectacular or exciting example of a twin-stick shoot 'em up but it is one of the smartest and offers its own type of fun if you're willing to give it a go.