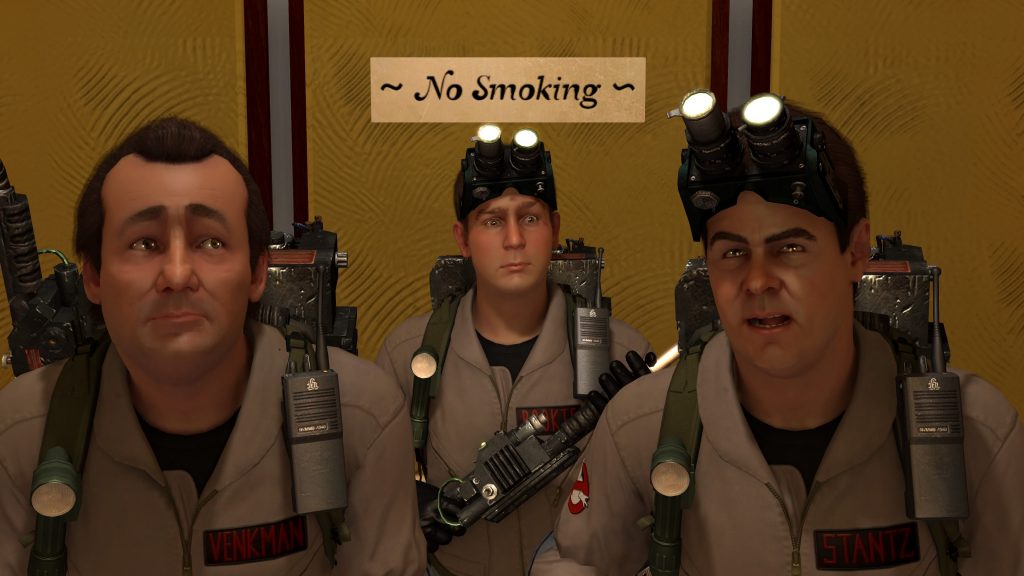 As movie licenses go, few have the sense of endearing legacy that Ghostbusters has. Despite having arguably only one excellent movie to work from (two if you are like me and loved the sequel), Ghostbusters has spawned a tidal wave of content. Ranging from comics, cartoons, extensive merch lines, video games and even a real-life movement of cosplayers that act as ‘franchisees’ to the original Venkman, Spengler, Zeddemore and Stantz lead team. All this took was a core concept that spoke directly to the eighties and nineties youth; mixing in cool gadgets, light horror themes and enough technobabble to make your head spin. From the very moment that the library ghost shushed us, we have been hooked on this entirely strange, yet incredibly lovable franchise.

Despite being thirty-five years old this year, the franchise seems to be alive and kicking. We had the recent all-female cast movie; We have the new original cast movie on the horizon (RIP Harold Ramis) and of course, we have a remaster of the previous generation game, which is also enjoying its tenth anniversary. All these things appear to have something in common, at least to me. Ghostbusters represents more than a comedic take at paranormal skirmishes. Owing to the age of the content it acts almost as a time capsule, representing a time in which you could smoke in-doors, PG films scattered with swear words and a celebration of the dirt and grime of city life in a time when people just accepted that. There is nothing that really comes close to that sense of nostalgia and the wholly unique concept of Ghostbusters. Despite how ugly some of those aspects may be to modern eyes. 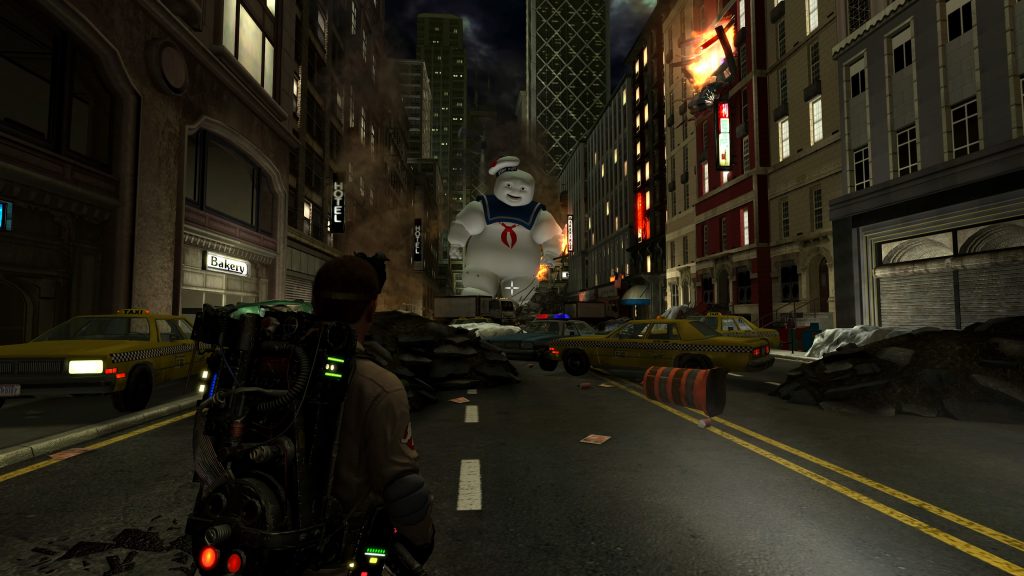 Quite aptly, Ghostbusters: The Video Game Remastered seems to take that above idea and rolls with it, for better or worse. Based on the 2009 title on PS3 and Xbox 360, it remains clearly a product of its time, despite being one of the better movie license titles out there. What it offered as opposed to other movie licensed games is a clear love and attention to detail that appeals to fans, while also some clever gameplay mechanics to back it up. At the time, it was the closest we ever felt to strapping on a proton pack and wrangling ghosts into traps ourselves. The standard of animation, voice work and the fact that Harold Ramis and Dan Akroyd were on writing duty certainly helped too, with a story comprising mostly of scattered concepts for the Ghostbusters 3 film that has still yet to come. Having the full team (minus Rick Moranis and Sigourney Weaver) on voice duty made the game feel special, it was the sequel that we never got on the silver screen and the authenticity of the action helped cement it as a minor gem amongst the previous generation.

You would be forgiven if you had missed this however, due to licensing politics in the UK, PS3 gamers had timed exclusivity for a good year before the Xbox 360 title officially made it to shelves, by that point the elements that once felt appealing were replaced by other titles of a similar ilk, so the game sort of fell into the bargain bins and out of sight before we knew it. So, for those who did miss it, the remaster makes a fair opportunity to step into a boiler suit and tackle the unique mechanics of ghost wrangling. The only issue being, is that despite that uniqueness we are presented with a clear decade old title that has aged as ungracefully as some of the haunts that you find within it. 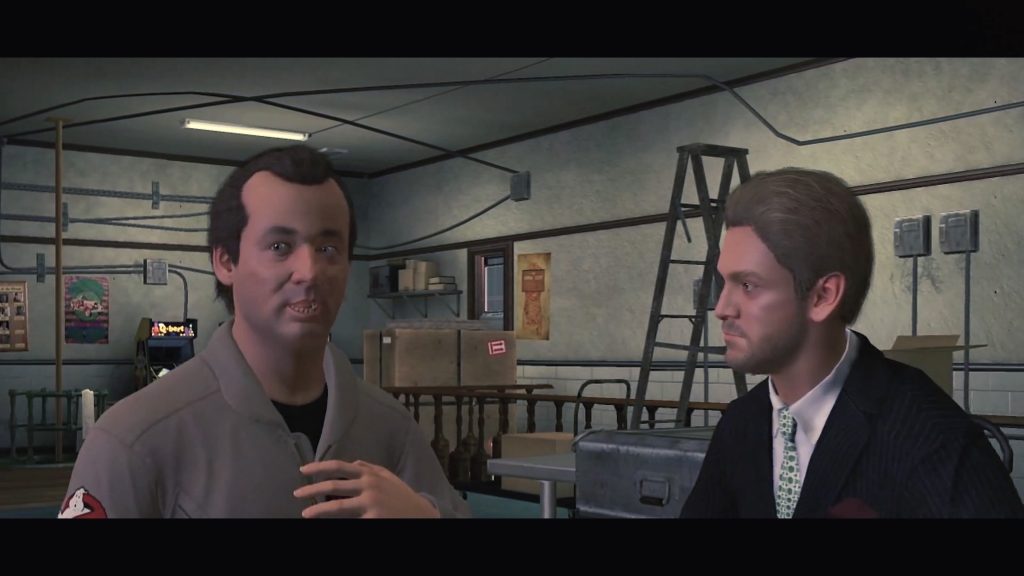 The first issue that exacerbates this feeling is within the cutscenes and dialogue. These were originally optimised for 720p displays, mixing in pre-renders with in-game models. The problem with this is that while the in-game models have been touched up to a relatively modern standard, the rendering looks incredibly dated, with a thick layer of grain, aliasing on characters and some incredibly stunted animation, untouched by the remastering process. The game now plays at a semi-solid 60fps but that mix of polished and otherwise elements feels incredibly jarring in 2019. It’s entirely possible that Terminal Reality just simply couldn’t have updated this, nonetheless it feels like a missed opportunity.

In fact, apart from the graphical quality and motion, not an awful lot appears to be remastered here. Additional quality of life doesn’t appear to have been considered, loading screens still take a while and the animation quality standards of 2009 are unlikely to wow an audience that has also experienced games like Heavy Rain or The Last of Us. It’s a good thing then, that the game was so damn fun to play in the first place. 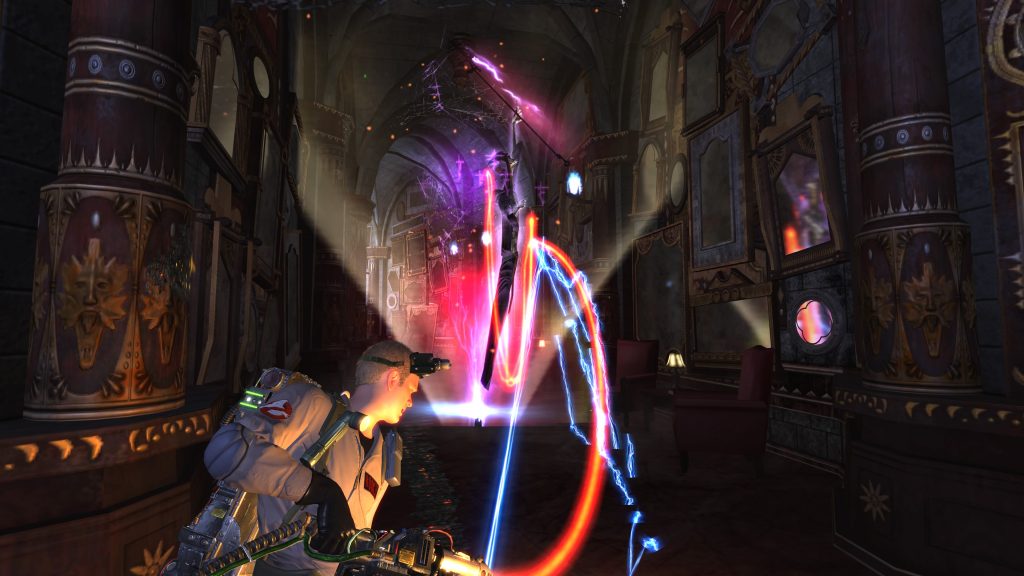 As a mix of Gears of War style heavy boot plodding shooters to what can only be described as fishing in thin air, Ghostbusters: The Video Game had a blend of familiarity and difference that was all too common, yet unique in the previous generation. Wading into skirmishes with apparitions and wearing them down with a steady proton stream while listening to quips from Venkman and friends is nothing short of a blast. The Ghostbuster toolkit of gadgetry is cleverly woven into the story also. As an unnamed recruit for the team, you take on the incredibly hazardous role of testing new equipment in the field as the amount of spook encounters has increased exponentially. As a result, you get all the new and old toys to work with, ranging from the proton pack to the positively charged slim cannon.  Each of the four weapon modes feature heavily throughout the campaign with little going to waste. Certain ghost types are weak to certain pack modes and in certain situations where rooms are being filled with ecto-plasmic beasties, there is a real sense of depth and strategy that needs to be applied when using the right one for the job.

This arsenal juggling amongst the fray also serves another purpose. It seeks to break up the inherently repetitious nature of a franchise that was previously confined to two-hour experiences on the passive silver screen. Trying to extend out a movie experience into a ten hour comes at that heavy cost. However, the developers have made a great effort of making the storyline fit this alongside the weapon changes. As much fun as ghost hunting with protons can be, it simply just wouldn’t have remained as such if that’s all you did for the entire duration. The unfortunate truth of this, is that it can sometimes feel like an evil born out of necessity, with some sections amounting to little more than typical shooting or chucking slime at walls for a bit. On the other hand, it does help make those proton wrestling sections that much sweeter. Even better is how destructive the weaponry is when you consider the environments. While these had a much higher impact in 2009 with environmental effects having those lower standards, it is still incredibly cathartic to survey the destruction suffered by the surroundings after a long battle and seeing the damaged property counter in the top left as you ‘mistakenly’ collide a proton stream with the background. 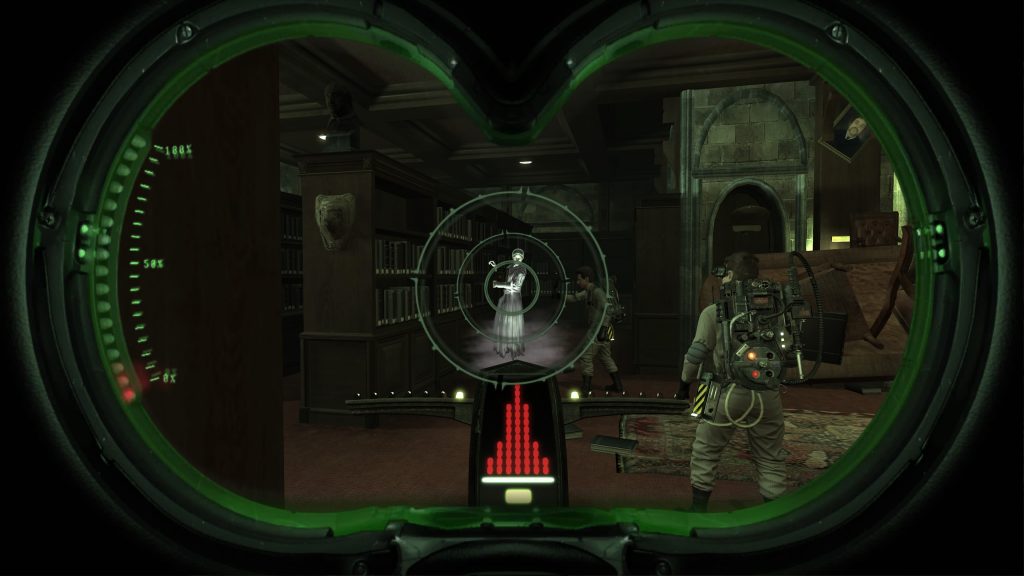 Of course, with that Gears of War comparison, there does come some caveats with a fair number of tropes seeping into to mar the fun somewhat. A lot of time is spent utilising the revive mechanic as an example. The rest of your team act almost as if they are lives and these diminish when they are knocked out of action. In some battles, this can mean you are spending more time picking up the team, rather than being a badass Ghostbuster. With the AI being as dated as this also, there are a fair few times where characters get stuck on scenery, either missing your vital revive or simply using the wrong proton mode for the job, uselessly proton streaming a possessor when they should be using slime.

Storyline wise, the repetition is seen here as well, which is a double-edged sword of being both fun and tiresome at the same time. While Ramis and Akroyd helped pen an intriguing story of a new menace taking on New York which fits greatly into the Ghostbusters mould, we do see the likes of Gozer return in his famous destructor form and Slimer which we have seen before in pretty much everything Ghostbusters related since the nineties. I will say however, that these retreads do fit with the overall narrative and to be honest, if they weren’t included then the game would have run the risk of not pleasing fans who would have clamoured at the chance to attack the famous spectres. The true star in all this, however, is the long-awaited interactions between the original cast members. Everyone gives a great performance, acting as if they never took the boiler suits off for decades of absence. Special mentions go to the voices of the supporting cast also, with William Atherton reprising Walter Peck,  bringing his slimy, jobsworth best to the proceedings. 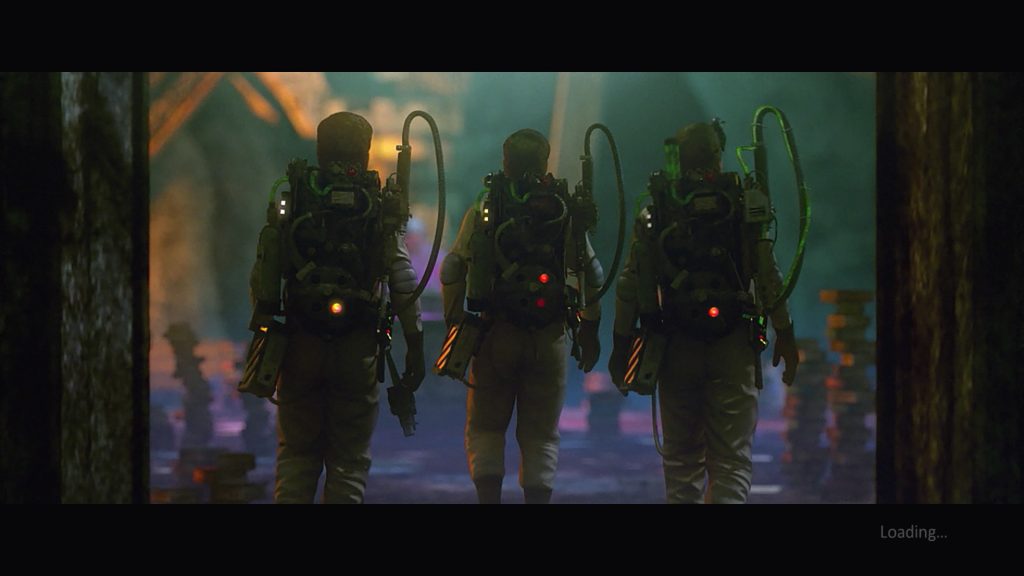 So, after all of this, is Ghostbusters: The Video Game Remastered any good? Well, it is, if you don’t mind the dated aspects and can look past the ugliness of some cutscenes. There are a fair number of things wrong with the title now, when looking at it from the eyes of a 2019 gamer that has played infinitely better experiences since. But that endearing Ghostbusters legacy is still alive and kicking in the DNA of this title and despite all its shortcomings, that legacy is a strong one that will appeal to a wide variety of fans of the franchise. Ghostbusters: The Video Game is still the best example of busting action in an interactive format, for better or worse.

Special Note: For this review, the multiplayer mode for Ghostbusters: The Video Game Remastered was not available. This is due to be added and the review may be updated to review the overall content of the game. This will not affect the scoring however, as the main draw for Ghostbusters is within the story line mode. From our experience of playing the PS3 original, the multiplayer mode was a simple distraction from the main course. It was fun, but not enough to be considered a gamechanger. Of course, this may change if the team at Terminal Reality are able to improve the connection woes that plagued the original. We’ll let you know.

Ghostbusters: The Video Game Remastered
7 Overall
Pros
+ Great storyline and voice acting from the original Ghostbusters cast
+ The unique ghost wrangling mechanic is as fun as it ever was
+ Great attention to detail for Ghostbusters fans

Summary
For better or worse, Ghostbusters: The Video Game Remastered is still the best example of proton slinging in the gaming medium. Terminal Velocity and co have preserved the unique mechanics of spectre combat and improved the in-game visuals to a suitable degree. However, the same can not be said for cutscenes, certain audio moments and the incredibly dated tropes. If you accept that this is a decade old title and fancy some time with Peter, Ray, Egon and Winston then there is still a lovable and endearing game to find underneath it all. Bustin’ still feels good, but your mileage will vary.