Dauntless is a free-to-play action game from Vancouver-based coders Phoenix Labs and is best described as a F2P Monster Hunter clone that uses Fortnite’s visual stylings.

When a F2P game comes in for review you guarantee that none of the team here at PlayStation Country will want any part of it and for me to review it as someone who didn’t play Monster Hunter, doesn’t like Fortnite and gets confused and angry like an old man at F2P currency systems means that something has gone wrong but, weirdly, Dauntless has killed off my recent gaming funk and is something that I’m looking forward to getting back onto this evening. 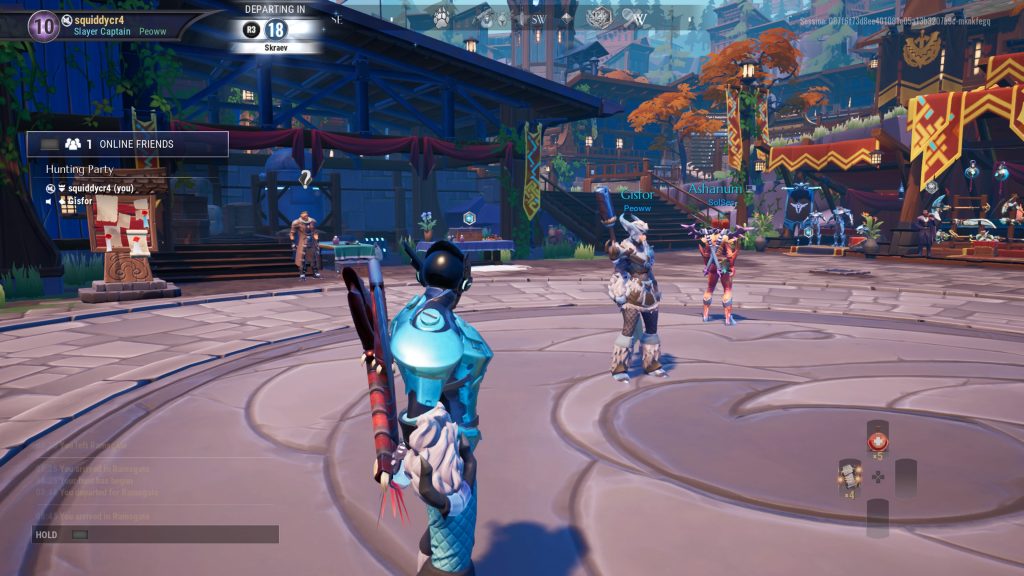 It wasn’t all sunshine and rainbows though. My introduction to the game wasn’t great. After a thin bit of plot and an unimpressive cutscene, you are dropped into a short tutorial which teaches you the basics about movement and combat. This tutorial barely scratches the surface of the game mechanics though and when you get into the game’s Destiny-style hub area, you are woefully underprepared for anything.

When you do get out into the action, Dauntless plays, as I said, like a Monster Hunter type of game or, to reference something I did play a lot, Toukiden. Like that game, you and your squad head out into a smallish area and seek out whatever monster lives there. You then spend up to twenty minutes smacking it upside its body until parts of it fall off and then it eventually dies. 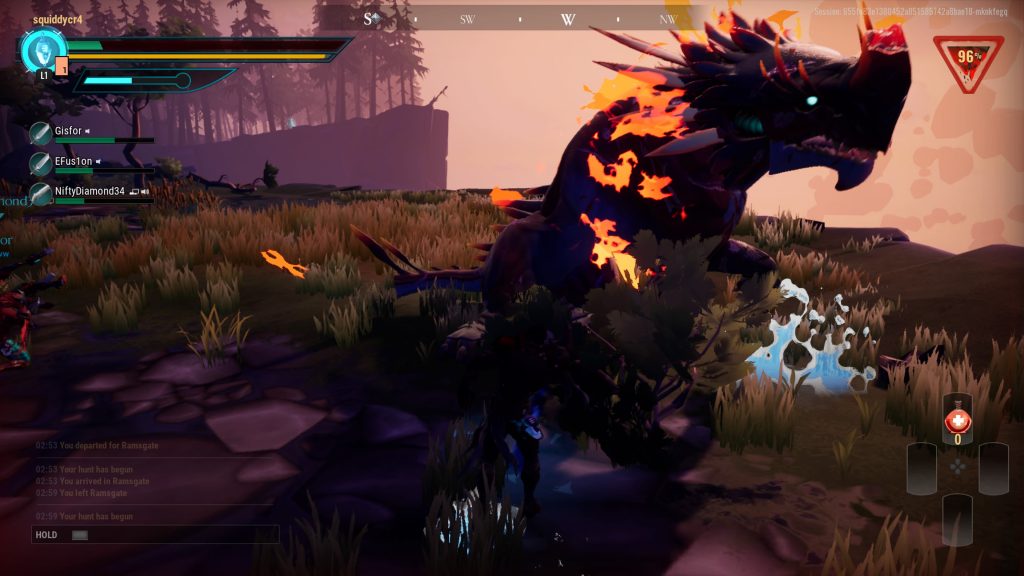 During combat you can use light and heavy attacks, and these can be comboed, as well as special items such as grenades and potions. You also have a helpful dodge move which you’ll need to master and special attacks that are based on the type of weapon you use.

Initially, you and your internet helpers will take these beasts down pretty easily but eventually the difference between success and failure comes down to learning how each monster moves and attacks, as well as upgrading your loadout to best prepare you for the battles. 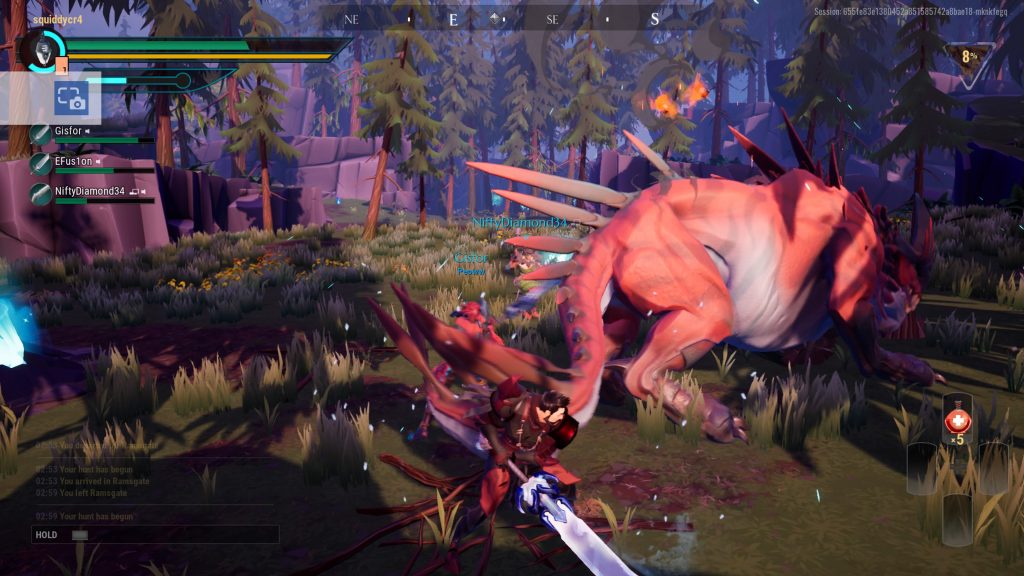 There are four element types that enemies have (fire, frost, earth, storm) and so you’ll want the armour that best protects against their attacks and a weapon that is crafted to do maximum damage. So if you’re fighting a frost monster you’ll want to be wearing frost armour and wielding a fire weapon.

When the level of challenge goes up but you’re equipped and knowledgeable enough to deal with it, Dauntless‘ combat is really enjoyable. The matchmaking is excellent, faultessly matching Gareth and I with randoms playing on PS4s, Xbox Ones and PCs in squads of four and when you’ve got a decent squad of well equipped players, taking down a tough monster is incredibly satisfying. Even if they are damage sponges like all Monster Hunter clones. 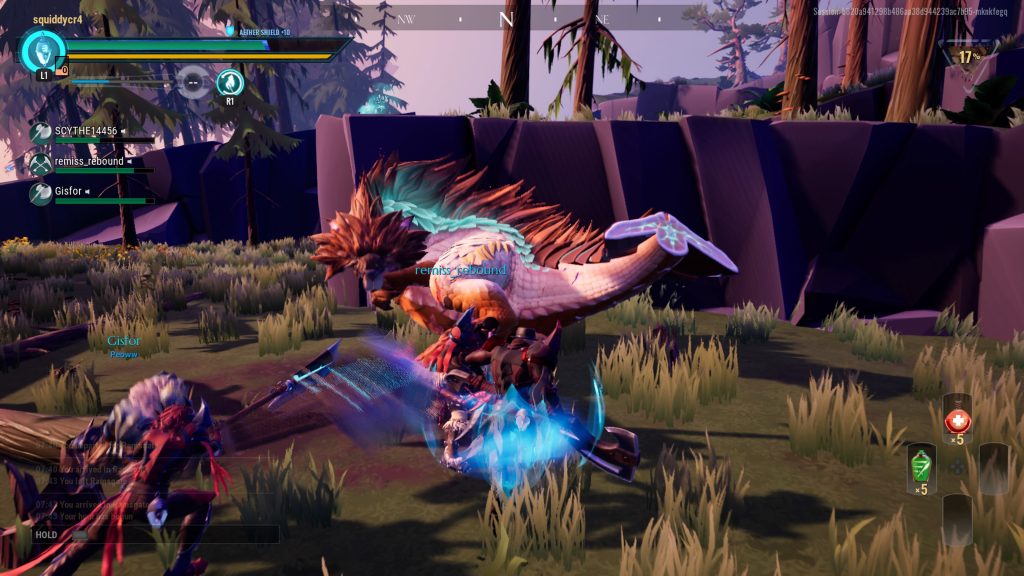 The problem with the game is getting to that point. For the first hour of the game, Dauntless is confusing. Eschewing any kind of beginners’ guide, we dived right in and were faced with multiple in-game currencies, confusing quests and a gang of NPC store holders all offering us options and things to do that didn’t initially make sense.

The way to make sense of it was to realise that for a few hours, it’s all still a tutorial. The store holders are your quest givers, not only asking you to kill monsters but also to craft and equip items and weapons. After playing for a few hours, I took an hour out to just walk up to everyone, to check every menu and eventually it all made sense. 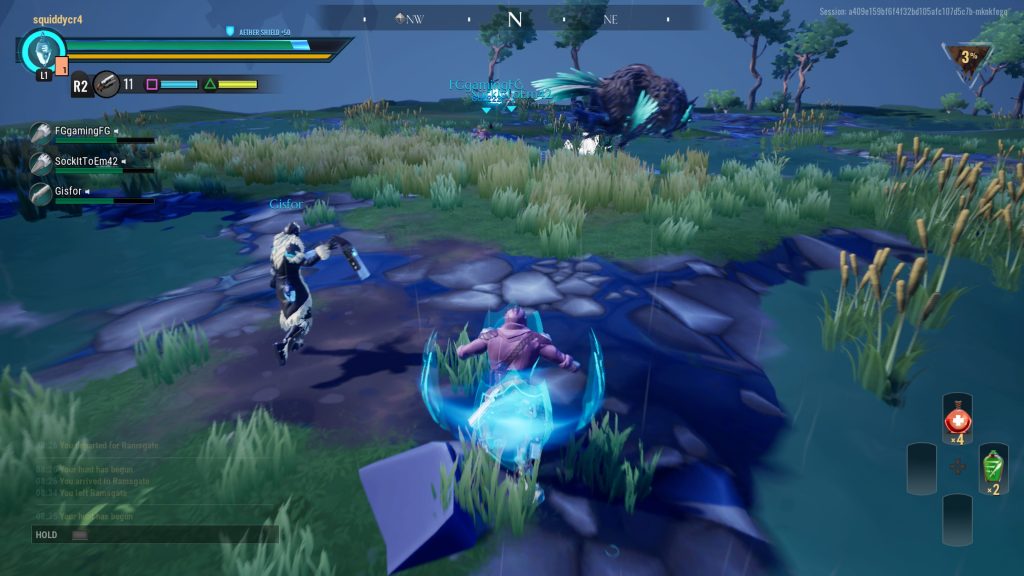 Being a F2P game, the are all sorts of items and currencies to consider and I easily get overwhelmed by that sort of thing. I was a huge fan of iOS gaming a decade ago but when it all went F2P my problem wasn’t just with the nickel and diming but also with the complexity of it all and initially Dauntless is actual pretty daunting.

You’ve got platinum which is your main currency but then you also have aces, steel marks, rams, gilded marks, aetherdust and transmog stones. To craft weapons and armour you’ll also need orbs and monster parts. It’s all a lot to take in.

And then when you buy equipment using platinum, figuring out where it is and how to use it is a whole other thing. 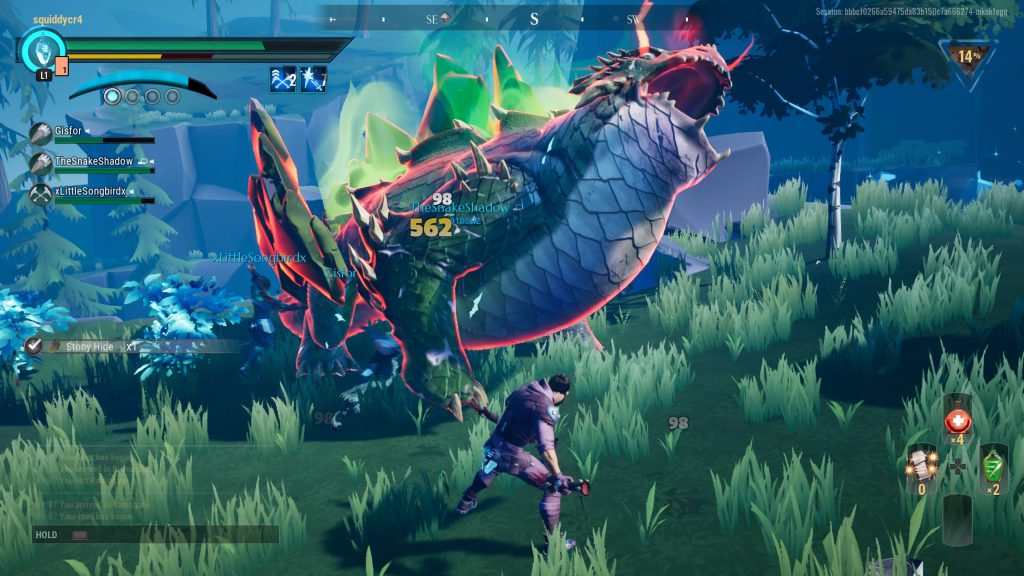 Eventually though it does all make sense. There is always a suspicion with F2P games that they’ll arbitrarily stop your progress in order to milk your wallets but that doesn’t seem to be the case here. Sure, you’ll unlock new tiers of monsters who will absolutely destroy you and to deal with them you’ll need to grind a few easier monsters in order to level up your gear, but there’s no way to buy the stuff you need to upgrade.

Instead, the stuff you can buy in the online store is mostly cosmetic (although grenades and potions are also available, not that they’ll turn the tide of battle). A few quality of life things are hidden in the store too, like being able to unlock extra crafting slots but they affect a very small part of the game so we’re not too worried about that. 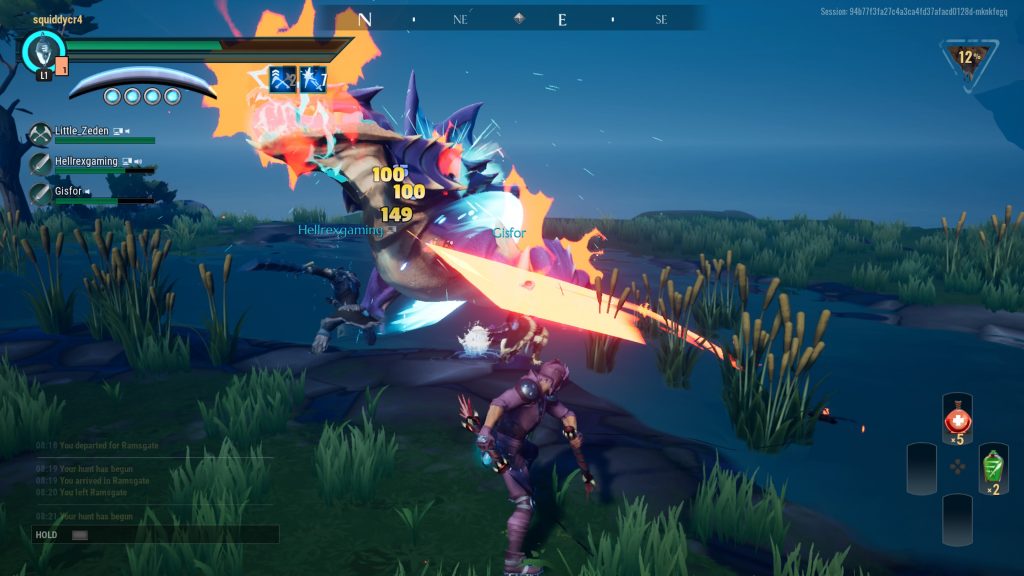 The main problem with the store is that it doesn’t really offer anything that enticing. As a free game, the review codes that we received didn’t unlock the game but rather just some skins and 2000 platinum. Platinum, it turns out, doesn’t buy you all that much. The usual skins, emotes, banners and titles are on offer but 2000 doesn’t go all that far (it also tends to leave you with low odd amounts that you can’t buy anything with).

I’d be happy to throw a few quid at the developer to support that game but there’s nothing to buy that’s really worthwhile yet. It all depends on if you’re the kind of person that is impressed by costumes and dancing moves. There are people running around the hub area who have clearly spent some money but the visual style is such that it all just blends in to everyone looking garish and simple. You don’t really notice the customisation. 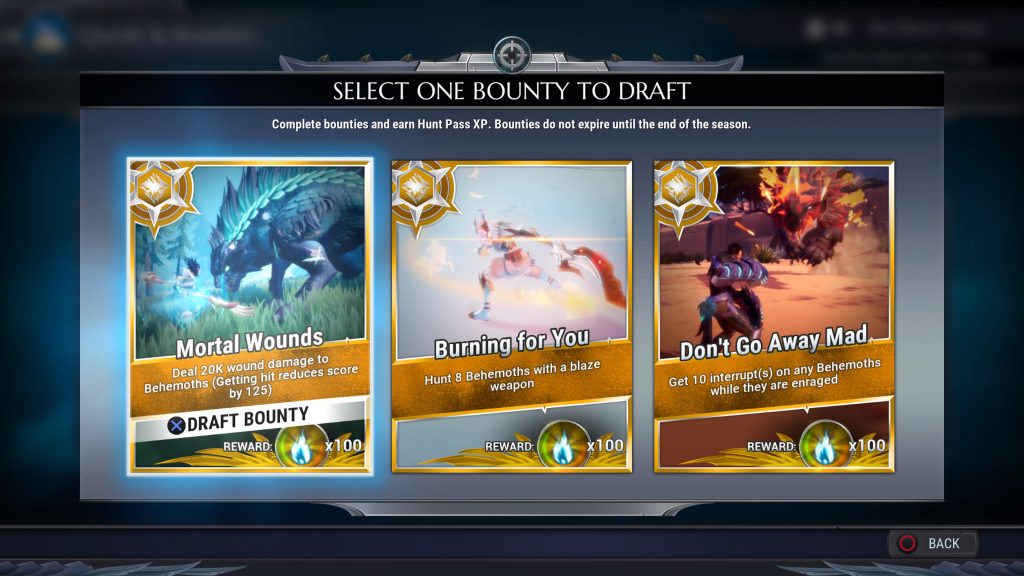 The Fortnite style graphics do their job. The action is clean and colourful and you get enough information in battle to inform your decisions. Some of the animations take a little too long, disadvantaging you in fights and the camera isn’t entirely useful at times but it’s not too bad. The only real knock is that it just doesn’t look all that impressive and that goes for the monsters too. Compared to Monster Hunter (on the wife’s gaming PC) and Toukiden, it’s all a little bit simple and low-res but free’s free and you get what you pay for.

All in all, I should have hated Dauntless but I didn’t and that speaks to the game’s enjoyable, deep combat and excellent matchmaking and I hope that they keep developing the game as I think it’ll be one that stays on my PS4’s hard drive until its time to get a PS5. The learning curve is a little steep at first but when you get past that, this is a really fun online experience albeit one that will get slightly repetitive over time as you go around and around the gameplay loop of upgrading, fighting, grinding and upgrading again but gamers looking for a decent freebie will find plenty to like about Dauntless.

Dauntless
8 Overall
Pros
+ Good, deep combat
+ Thriving online
+ Cross-platform play
+ Loadout customisation is engaging
+ Free
Cons
- Steep learning curve
- Too many currencies
- Paper-thin story
- Not much worth buying in the store
- Can be repetitive
- Visually simplistic
Summary
We didn't think we'd end up enjoying a F2P Monster Hunter clone ever so the fact we do is a credit to Dauntless' enjoyable combat and thriving online player base.