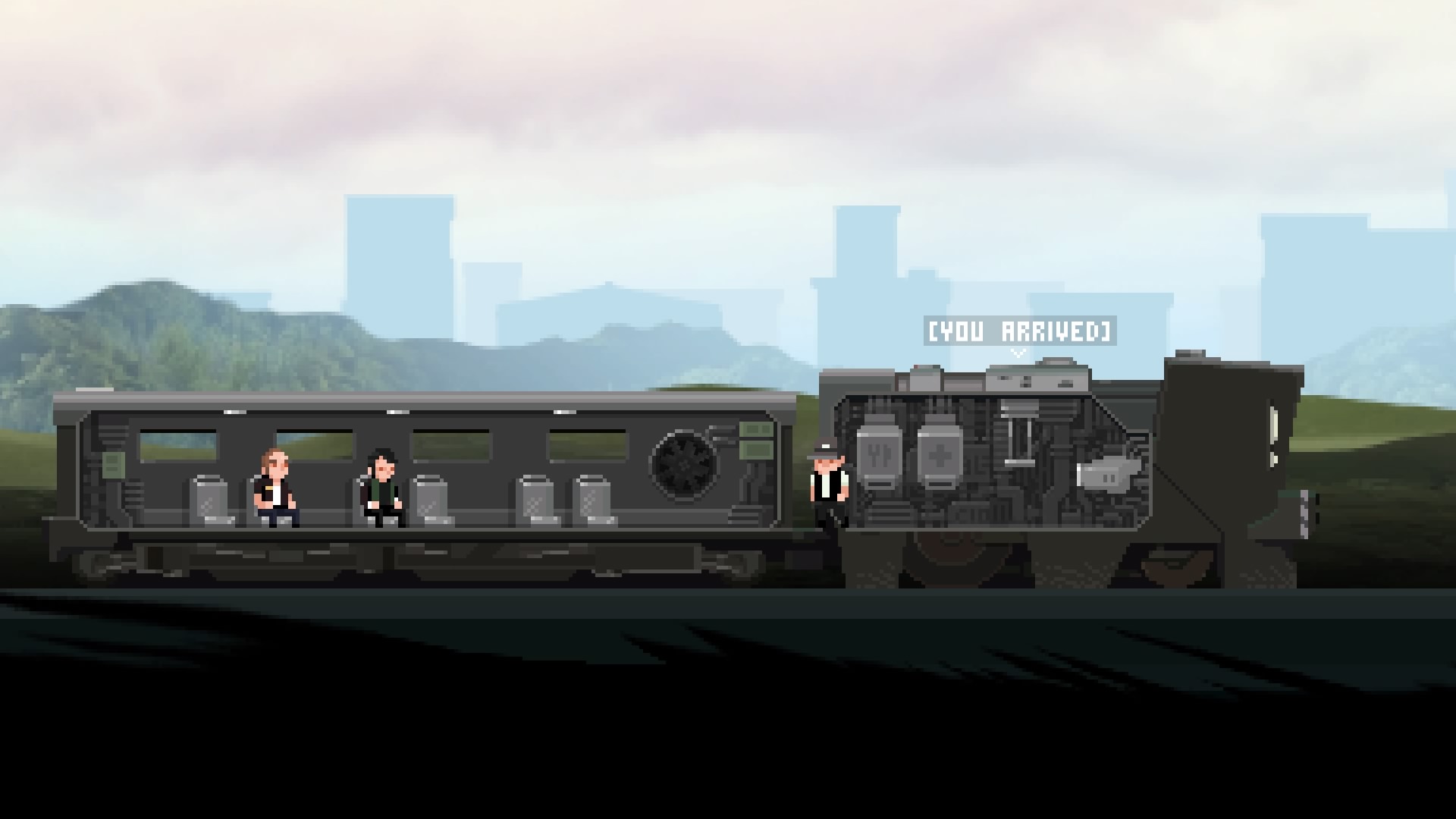 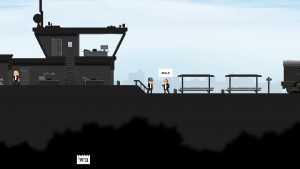 In an indie scene that is somewhat bereft of fresh ideas, sometimes all you can do is throw in an extra gameplay element and hope that it adds a little extra something to make it all worthwhile. This is definitely what Do My Best, the two man team behind The Final Station, have done here.

The game combines a 16-bit aesthetic with some 2D exploration, zombie-shooting action. These are things we’ve seen before, either together or separately. To liven up this tired mix, they’ve also added er… train driver simulation. Well, kind of.

So, the story here is that 106 years ago a cataclysmic event happened called ‘the visitation’ and ever since then humanity has been a little jumpy but things are back to normal and now you’re just a simple train driver going from town to town.  Mentions are made regarding mandatory training for a potential second visitation but, aside from that, everything seems normal.

The game doesn’t explain itself at all at first. The train drives itself but there is some interaction possible between you and the passengers and some maintenance items on the train. Eventually, the train will come to a stop at the next town. To leave any town, you need the code to the ‘blocker’ and ordinarily this can be found in the train station. So, you leave the train and wander around the town, in 2D, talking to people and finding items.

However, then you start getting snippets of news from the other train operators that certain routes have been closed without any explanation. Regardless, you keep pressing on until you realise that there’s a new ‘visitation’ and that’s going to basically mean zombies.  Well kind of.  These black, shadowy figures slowly wander towards you with the express (arf!) aim of killing you.  We get it, we’re getting pissed off with the rail unions striking too. 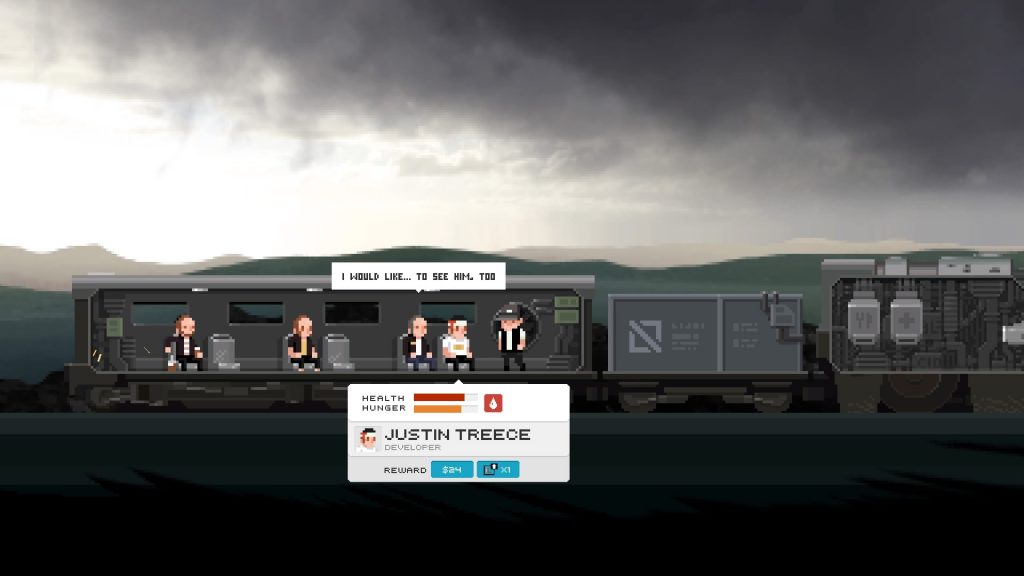 At this point the game mixes in some 2D combat. You can punch with varying power depending on how much you charge the attack, and that comes with a few seconds of cool down time) or shoot your way through them but ammo is tight.  The enemies don’t put up a lot of resistance but there are plenty of them to worry about and so each new town becomes an exercise in figuring out the most effective way to clear the danger and get the next blocker code.

At this point, the game steps up a bit. I found myself restarting each town over and over, trying to get take as little damage as possible or trying to kill a zombie with a chair instead of wasting ammo. However, each new room is blacked out until you open the door and when five zombies (including a couple of fast ones) come charging out, it really can panic you right in the pants.

This is definitely a good game. The train stuff feels a bit tacked on and while there is some decision-making required in terms of passengers (do you give them food and deliver them to their destination for money or let them die?  Hint:  don’t let them die), you’ve really got no information to inform your decision. I’ve fed a passenger who was about to die but then arrived at the next station a couple of seconds later, meaning I could have saved that food. And was it even worth it? I mean, I’ve made all this money but there’s hardly anywhere to spend it. You know, because the world is ending.  That said, my second playthrough (for the trophies) was a bit better informed, no thanks to the game, and I managed to keep everyone alive. 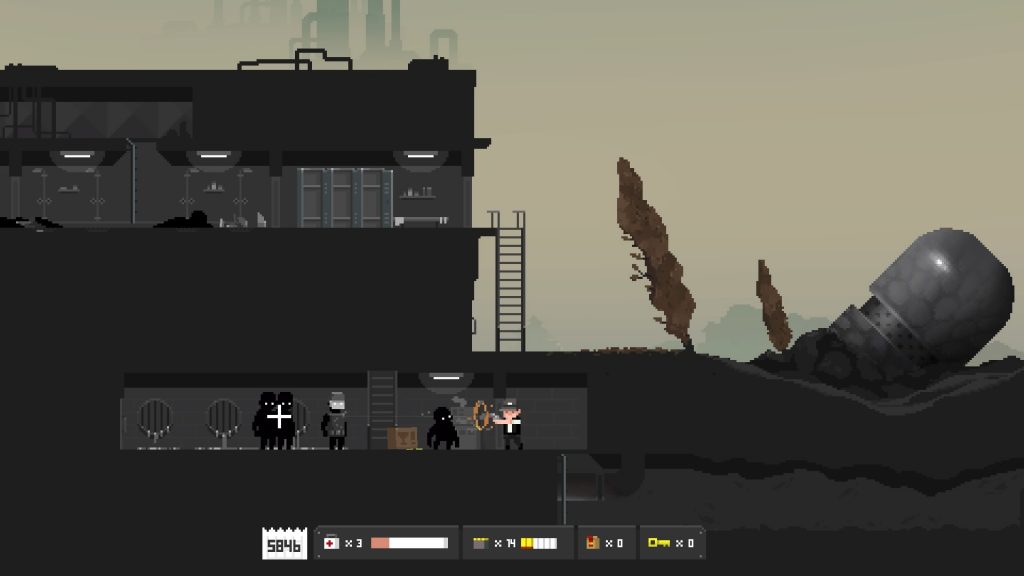 The maintenance actions on the train amount to small mini-games (nothing that interesting) which are a minor inconvenience. You do have to juggle those with checking on your passengers or occasionally getting a message from another train operator but it’s nothing too taxing.  That said, they need to be addressed or the passengers may end up in danger or the train will slow to a crawl.  It’s nothing to worry your pretty little heads over though.

I like The Final Station but if it had a more polished, less cutesy-retro look, it could have even been a little scary and that would have added to the whole thing. It’s still tense and tricky but it could use a little atmosphere, especially as the game has next to no music. I get what they are going for, but sometimes this 16-bit look is a little too obvious these days. Also, the interface can get a bit fiddly. Straight from the off, the choice of colours for menus is flat out terrible. On the main screen you’ll be wondering why the menu is highlighting the options you don’t want. You’ll figure it out but it does make you realise what happens when you have tiny teams making games, sometimes they miss the obvious stuff. 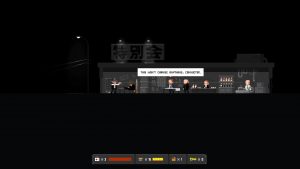 But don’t let that deter you from playing what is a great little action-survival game. The Final Station isn’t the best survival game and it’s not a particularly great run and gun shooter (not that it really tries to be) but when you put both elements together, it delivers a compelling experience that kept me going to the end but it really is one of those games that you play and think is a load of bollocks.   Which doesn’t help you at all, does it?

The Final Station
7 Overall
Pros
+ The combat sequences are enjoyable. + Good game and level design leads to some proper tension.
Cons
- Cutesy 16-bit visuals detract from the atmosphere. - Train stuff feels a little tacked on. - Some bad interface design choices.
Summary
The Final Station is a cross mixes exploration with some run and gun gameplay. It doesn't do either thing extremely well but when you have to clear out a room full of zombies with a pocketful of shells and not much else, the game delivers a good mental challenge and a dollop of tension. As the story, and challenge, develops the game hits its stride. Confident and artsy, maybe it has tricked us into thinking it's good. Or maybe it just is. You might want to wait for the inevitable PSN sale with this one.