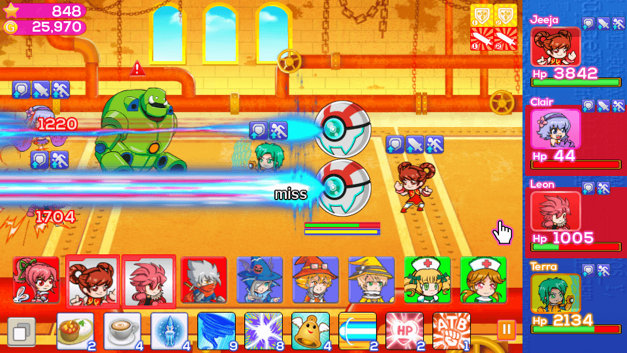 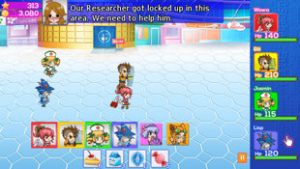 The PSN store page describes WanderjahR as a ‘compact RPG with real-time strategy combat and an intriguing story’. This I feel is a little misleading which is unnecessary as there is definitely an audience out there for this game.

Why do I say that description is misleading? Well I would not describe WanderjahR as an RPG. Why? Well, it has an RPG style combat system and you can level up your characters but that’s all it has. There’s no exploration, no conversations, no gear to equip. This is fine, I just wanted to make it clear before you continued reading this thinking it was something it wasn’t.

WanderjahR tells the story of humanity finding the source code to the universe, as in, the universe is a program and in finding it they can alter it how they see fit. Just as they’re putting the finishing touches on the code to eradicate all evil from the world monsters start appearing. Coincidence? You control a squad who must drive back the monsters.

Now weirdly most of the story is hidden within menus. As you progress through the game more story unlocks but it’s not thrust in your face, you have to go looking for it. This could be seen as a good thing if you’re just here for the gameplay and to be honest, although quite thorough with journal entries about your different squad members as well the main story you won’t be missing much if you do skip it. Reading through pages of white text on a black background isn’t that fun either.

Other than that outside the main gameplay you merely have a menu to interact with. Here you can level up your characters by spending points you’ve gained through completing levels, buy items to use in battle, buy ‘artifacts’ to equip to give certain boosts, rearrange your team, select a level and start a level. 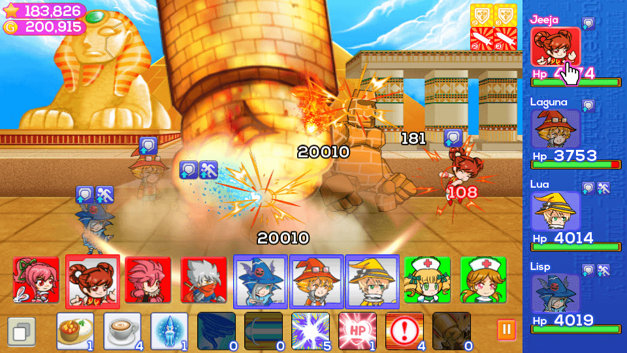 The meat of the gameplay (in a meal comprised totally of meat) comes as you enter a level. Here you’ll have four characters on screen and they’ll automatically do whatever attacks they can, you have no say whatsoever. A Vanguard will constantly attack with melee attacks, a Buster will attack with magic spells, a Sentinel will guard the entire team by provoking enemies and Medics will heal characters and remove harmful status effects.

There are less obvious classes as well like Entertainers who buff your party members with beneficial effects, Aggravators who debuff enemies with negative status effects, a Thief who can steal money and special items from enemies and a Researcher who can learn enemy abilities by witnessing them enough.

Although you start out with one character you gain more very quickly and since you can only have four on screen you soon have too many to use at once. Here’s where what sounds like an idle clicker game suddenly becomes quite strategic. As every character is a certain class they have a very specific role to play, so you’ll want a Sentinel to take the heat off all your other characters, a Buster to do magic damage to the enemy’s Guard Gauge, a Vanguard to stop the gauge refilling and maybe a Medic to keep the Sentinel alive.

Very quickly you encounter enemies who are very strong and the best way to damage them is deplete their Guard Gauge. Doing so will render the enemy’s defences weaker for a time allowing you to put on some major damage. The concept of a Guard Gauge may sound familiar to you if you’ve played Final Fantasy XIII as it’s basically taken straight from that.

If you have played FFXIII then you’ll know that the combat was one of the better aspects of that game, although it took a while to fully reveal itself. Similarly, there you were constantly changing classes mid battle to tank damage, or cast debuffs and WanderjahR is exactly the same. Using the touch screen you can replace current members of the party with others to inflict status effects on enemies or boost your own attack or defence. As the game progresses there won’t be many times where you’re not constantly adapting to the situation and switching characters in and out as needed.

Unfortunately this is a port from the PC where you used the mouse to move new members in and out, so at no point did your fingers get in the way of the screen and a mouse pointer is far more accurate than a finger, especially when you’re in a rush. You can move either analogue stick to act as a mouse pointer but it moves too slow to be useful and would probably be too inaccurate if it moved any faster. You can also use the dpad to snap between selectable items but this requires too many button presses to be efficient so you’re stuck with using your fingers. Not terrible but I do miss inputs regularly and there is quite a lot of information to keep track of on the Vita’s screen, which I’d never considered too small until now. 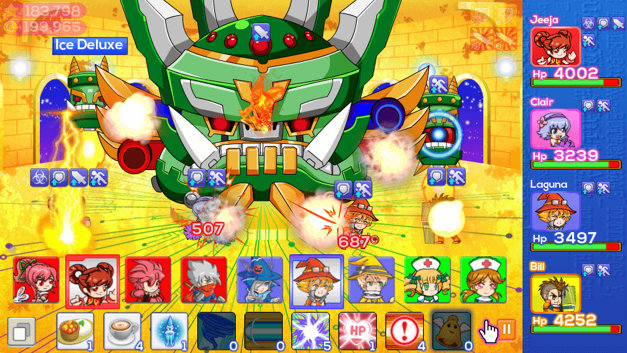 There are multiple worlds each separated into levels. You can go back to levels as and when you choose but the experience you get for doing so drops off dramatically, although levelling is handled slightly differently in WanderjahR so grinding doesn’t become such an issue. Each world caps your level, so you can’t go above level 6 before you finish the first world, you can’t go above 12 before finishing the second and so on. It’s an interesting idea that forces you to win battles through tactics rather than brute force.

To add to that each level has a target time which will determine how many stars you get at the end of a level. Beat the target time and you’ll get five stars, do it whilst underlevelled and you’ll get a crown. There is a trophy for doing so on all levels but it’s a nice thing if you want to challenge yourself. Unfortunately I’d already overlevelled myself early on before I realised this was a thing and there is no mechanic in place that I could see that allowed me to force my level lower if only temporarily so it seems I’d have to delete my game and start again if I wanted to do that. This is less nice.

In certain levels there are some secrets to decipher, like in world one you can get your thief to steal a key from a certain enemy that opens up another level which unlocks a new character. However these become quite cryptic very quickly. In the second world there is a cute little animal that comes in with an enemy group, the first time the AI just destroyed it and moved on but I went back a second time and this time switched out all my attackers so they couldn’t damage it. It said something like “Need HP” so I had my Medics out but they were only interested in healing my party, so I tried giving it one of my healing items but it didn’t work, so I have no idea what I’m supposed to do and the game has no interest in helping me out with the only clue being that I should ‘try and help that cute little thing on the boat’.

This adds a little variety as otherwise you are just going into battle, fighting through waves of enemies and then moving onto the next level. Each world ends with a boss who requires more strategy and usually ups the difficulty as they require a certain tactic to defeat whereas the waves of enemies tend to just require you to survive whilst outputting damage. Once you defeat them it can feel quite rewarding but in my experience they require multiple attempts and as a level can take over ten minutes that’s a lot of wasted time since you don’t even get experience if you lose against a boss like you do in a normal level.

Normal levels can take a long time too with my record being twenty five minutes (the target time was fifteen…) which doesn’t work in the game’s favour. More shorter levels would have been appreciated as you can quickly burn out doing the same thing over and over again for long periods of time.

There is a decent amount of game here too, the developer claims over twelve hours but that will obviously depend on how much trouble the game gives you. Each world has a different look and although the screen shots may make it look like a cheap mobile game in action I actually found the visuals to be simple but quite charming. The music is nice and catchy too although with the levels as long as they are the tunes don’t loop they just stop and move onto another song which is a little distracting. 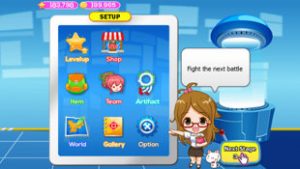 Ultimately, if you’re a fan of JRPG battles, specifically Final Fantasy XIII’s battles, then WanderjahR could well be the game for you. What starts out as a fun pick up and play battle system quickly gets complicated and the levels overly long but if that doesn’t put you off then there is a rewarding, if steep, difficulty curve that will challenge you. It’s not perfect and the lack of variety may wear you down but, for a relatively cheap price, this is an interesting experience.

WanderjahR
6 Overall
Pros
+ Battle system is a fun one + Secrets to discover + Decent amount of game
Cons
- Very difficult - Levels are too long - Nothing but battles - Secrets are a bit too cryptic
Summary
Wanderjahr is an interesting and charming battle-focused sort-of-JRPG that undoes itself a little by dragging out the levels which is never good considering the Vita's battery life. It's no pushover either so if you fancy a challenge, this is a worthy, if flawed, addition to the Vita's growing list of RPGs.
We use cookies on our website to give you the most relevant experience by remembering your preferences and repeat visits. By clicking “Accept”, you consent to the use of ALL the cookies.
Cookie settingsACCEPTREJECT
Manage consent