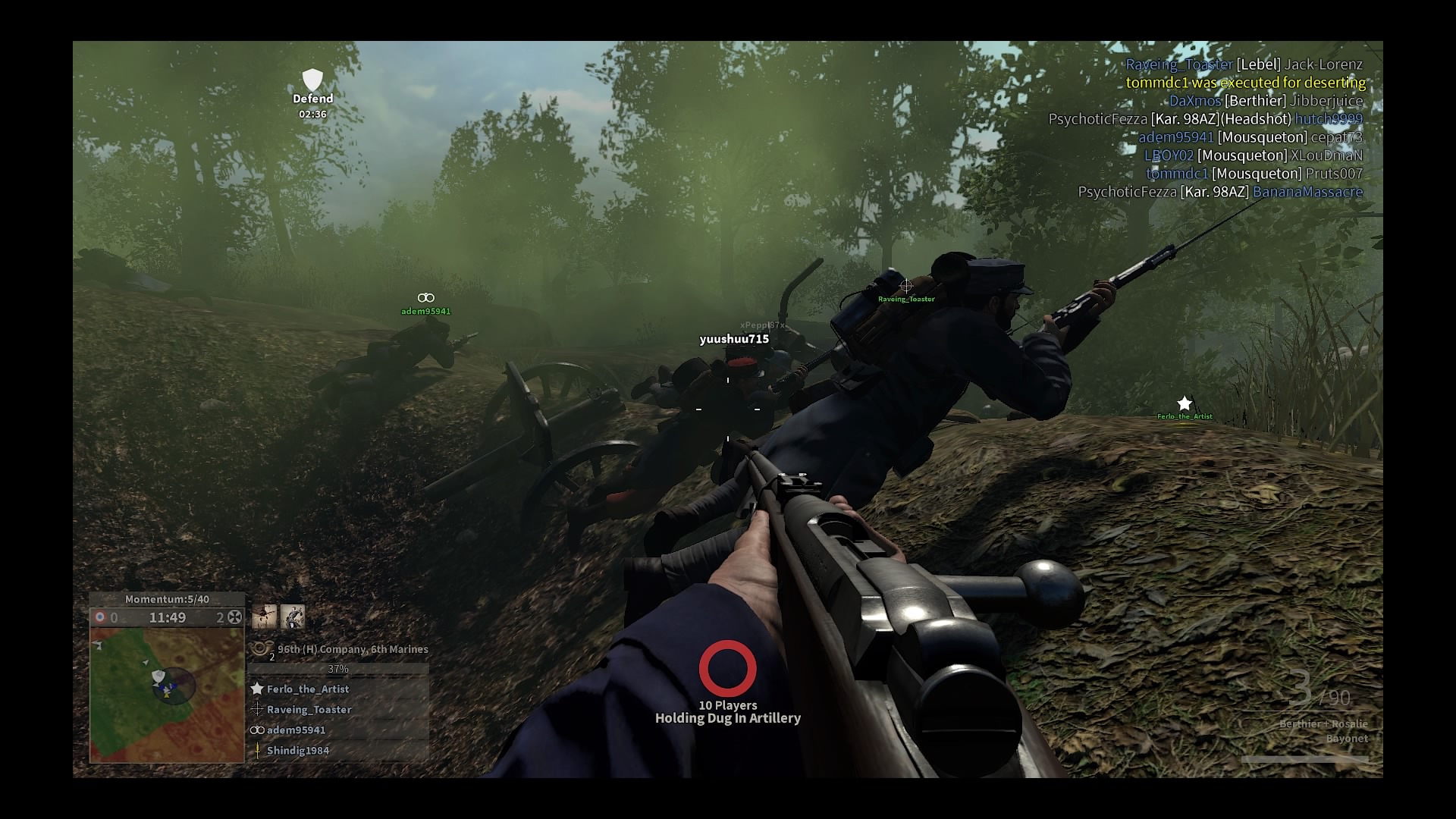 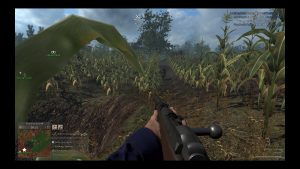 A century after the battle of the Somme, The Great War seems to be in the gaming consciousness with two big releases focusing on the conflict. Verdun arrives after an original baptism on PC earlier in the year and, with it’s focus on a more realistic portrayal of trench warfare, will it sit well with a console crowd?

Focusing on some of the more pivotal battles of the war, Verdun does well to incorporate what made the first world war so different. At its core, this game is a multiplayer shooter but the setting of trenches and wide, exposed plains give the game such an interesting, mechanical outlook. It begins with a brief text tutorial of the game’s showcase mode: Frontlines. In this, your squad of four combines with others to battle an opposition over territory. During of this tussle you’ll charge and defend trenches in an effort to push them back. The push and pull always gives you something to work for and gives the match a crescendo, even if they do sometimes end in stalemates.

Combat feels meaningful as you peer over the precipice to pick someone off. It definitely gets that feeling of exposure right and the squad-based nature of it encourages you to not veer too far from your group. Back-up is nice to have and the game punishes those who stray too far with suicide for desertion. It’s a period appropriate mechanic which, unfortunately seems to rear its head too quickly when you’re switching from attack to defence. You can’t really scramble back before the countdown wipes you back to the last trench. It’s quicker just to let that happen rather than trek back. As you’d expect, guns take forever to reload so, try to find a window and cover to do so. 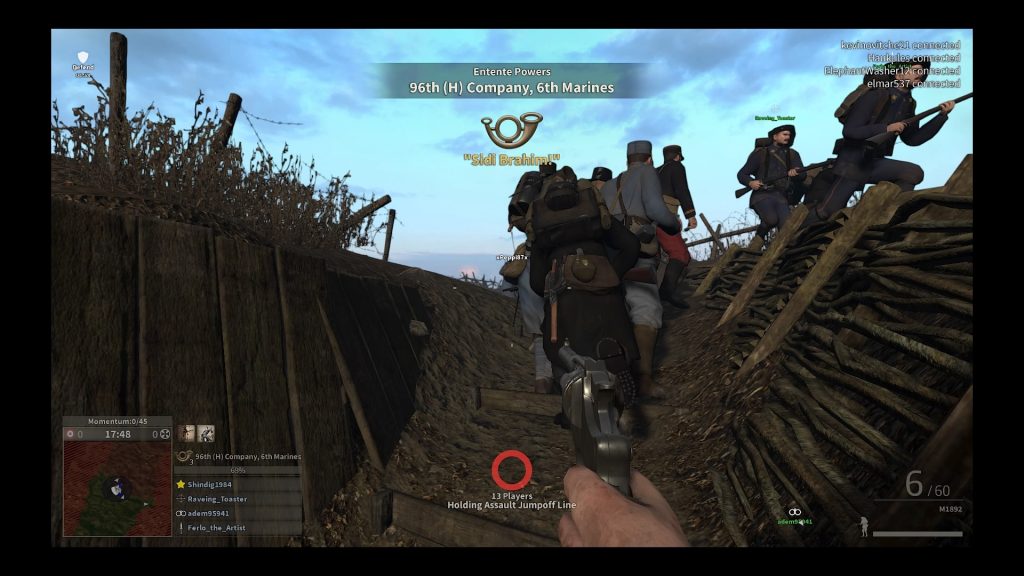 Enemies don’t stand out well against the mud and barbed wire so there’s a genuine unease associated with going over the top. Artillery strikes can make life troublesome, as well as gas attacks which will temporarily blind you if you’re not wearing your gas mask. The risks make progress satisfying, even if the camped nature of attack versus defence might turn some people off. I can’t hold that against it, though. It seems to fit the tale it’s trying to tell with each match. At times, it feels like a meat grinder of futility where staying alive is the next best thing you can do when the kills aren’t coming your way. Victory, kills and completed matches bring with them persistent rewards. Some of which can be used across the other modes. It’s a really nice touch that uniforms from the latter parts of the war can be awarded. Gaining those with a squad you’ve been together with can really give you a sense you’re surviving a grander battle.

Sometimes technical issues can get in the way. You’ll sometimes spawn you away from the action, resulting in a quick suicide. I’ve certainly had lives last milliseconds because the game decided to spawn me in the sighs of my previous captor. There’s also a peculiar issue where the game wants to respawn you in a prone position. If you happen to be on top of a fallen comrade, the game doesn’t know what to do with you until someone puts you out of your misery. Generally, the game carries on reasonably well. I’ve not noticed any connection issues or hitches and it seems like a competent recreation of the game that hit the PC. So far, the players are out in force. Its skewed heavily towards Frontlines but I’ve seen plenty partake in the more traditional game modes.

It falls apart somewhat with the more traditional modes. Deathmatch and Team Deathmatch suffer. Without that group mentality, it loses some of its appeal. The Hoard equivalent fairs a lot better as you hunker down against waves of adversaries. When it’s a free for all, that sense of exposure just multiplies to unreasonable levels. You lose that sense of a greater goal and I just don’t find them as enjoyable as the main mode. 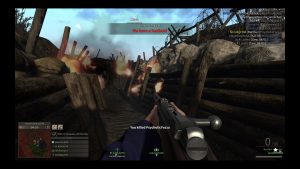 Overall, Verdun is an admirable effort that manages to encapsulate the feel of being bogged down on the front. It’s propped upped by an interesting premise that is largely executed well. The traditional modes dent the package somewhat and the technical issues can offer mild frustration. If you’re after something different, this may be worth considering. I’m not fully won over but enjoying it more as time goes on. There seems to be a console audience for this, which is encouraging.

Verdun
6 Overall
Pros
+ Well-executed premise with an enticing main mode. + A great sense of dread and exposure. + Games are quick to get into with no connection issues. + Rewards passive play, as well as kills.
Cons
- The more traditional modes don't fit at all. - Spawn points seem a little random. - Desertion rarely seems fair.
Summary
Verdun captures all the action and misery of being stuck at the front in a war where the power shifts constantly and young lives are lost in a hopeless struggle. Except now you're sat on a sofa. While its more traditional modes show off its weaknesses, the main Frontlines mode reveals its depth and atmosphere and seems to have captured an audience on PSN.
We use cookies on our website to give you the most relevant experience by remembering your preferences and repeat visits. By clicking “Accept”, you consent to the use of ALL the cookies.
Cookie settingsACCEPTREJECT
Manage consent