Depth of Extinction comes from HOF Studios and is an odd beast. Influenced by the likes of XCOM and FTL it’s an indie game with more depth than its pixel art graphics might imply.

The game takes place after the majority of the world has been submerged, as such your method of transport is a submarine. You have no direct control over it however, as after you’ve selected your mission you move around by selecting nodes on a map. Each move uses one fuel so keeping an eye on that and the health of your sub whilst visiting as many nodes as is necessary to get to the goal is the key to getting stronger. If that sounds like FTL it is very similar, but beyond the map screen the similarities are less so.

Although there are run based elements like a rogue-like this is, at least on the default difficulty, far more generous and so you shouldn’t be wiping out. As such this isn’t a test to survive until an hour long experience is done, Depth of Extinction is far, far longer than that. Each mission can take longer than a successful run in other rogue-likes, depending on how thorough you are so in that respect it’s more like XCOM.

The game will give you a basic idea of what a node is before you land on it, but once you do a more detailed, choose your own adventure-style scenario will play out. If you’re visiting a shop generally you’ll just get to browse the goods and buy or sell whatever you need/can afford. If it’s a civilian outpost they may help you out or steal some of your fuel whilst you’re distracted. Bases occupied by pirates, androids and slavers can reward/damage you without action at times but generally speaking you’ll be dragged into a battle which is where the XCOM comparisons really start.

Although 2D in this case the battles are turn-based and are reliant on using cover and flanking enemies with your troops. Each character has a movement range represented on a grid and two action points to use. Moving too far will use up two action points but if you only use one then you can shoot or use an ability. Players of XCOM will recognise a lot of these, including the always popular Overwatch ability which lets your characters react to enemy movement and take a shot when they move into view. It’s got its own ideas too, with the excellent Follow mode making your team auto-follow you when there are no enemies and going out of their way to grab loot too. 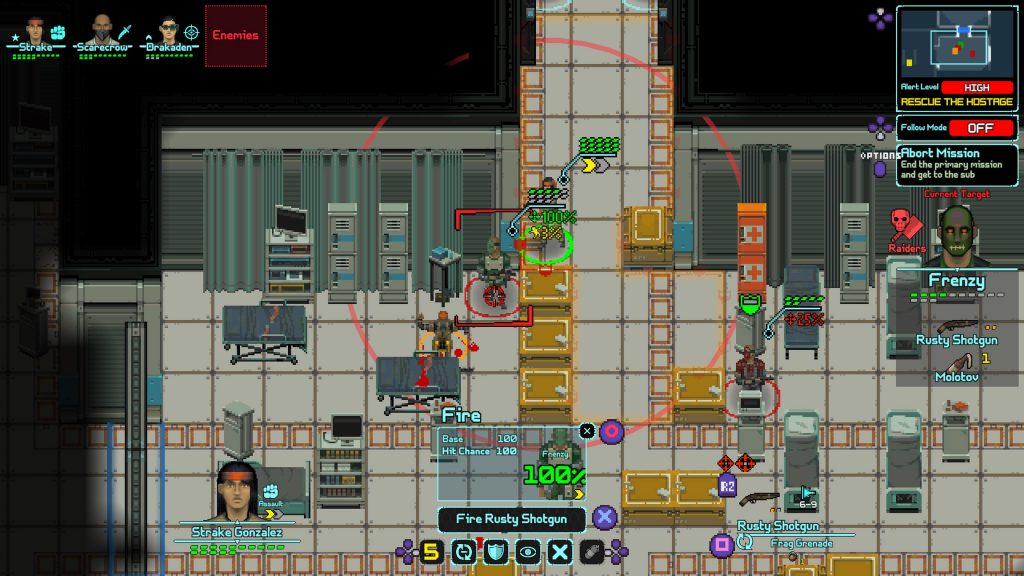 If the graphics were 3D you’d be hard pressed to differentiate the gameplay from XCOM which I don’t mean as a slight. XCOM‘s gameplay is top of the class so the fact that this indie game can use a 2D engine and be comparable is to be applauded. Completing missions and defeating enemies will grant experience and loot which can be used to upgrade your characters. You get to choose the class they become on their first level up and there are quite a few to choose from. You get two points to put into their skills each level up and everyone has the same basic stats except for their class which provides specific bonuses and skills. Different classes also work best with certain weapons and incur a penalty if they’re using an incompatible one.

After the mission is where Depth of Extinction shows its kind side. All characters regain all their health for the next battle and there is no resting required. This does mean you generally continue using the same characters throughout since they’re already levelled but they can be lost in battle. However you can revive a character for free if they’ve fallen in battle and if more than one falls you can actually retry the battle from the start, disregarding your failed attempt. This option is removed at the higher difficulty but is very generous for this type of game. Even if you run out of fuel the game lets you send out a beacon to beg/trade for more and I think if your sub is destroyed then, assuming you have the funds, you can start the entire mission over. I started a new campaign and tried to destroy my sub on purpose but I wasn’t able to so I’m not sure. 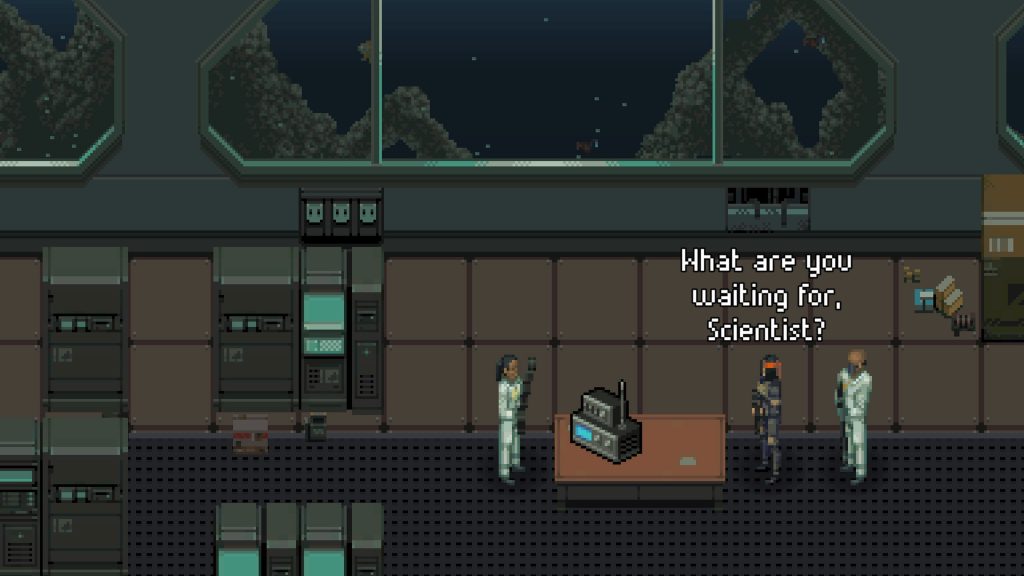 So you pick a mission based on the reward/plot progression and play through a few maps of nodes to complete it; battling, gaining experience and loot as you go, before completing the mission and choosing another one, generally with the same crew. Although the battles are actually very good the down time between them is very short. You can level up and assign new gear if you got any but the majority of nodes result in a battle which means you’ll be spending plenty of time seeing the same environments and enemies as you play through a mission. It does result in repetition setting in which doesn’t kill the game because the individual parts are very good, but it does make it difficult to play for too long at a time.

The presentation is pretty good too. The 2D graphics are as detailed as the style allows with some decent, if simple, animations. The viewing angle takes some getting used to as far as taking in all the information but you will. The music however is superb. It brings hints of FTL and classic XCOM to make some tunes which have been stuck in my head during this review process, with gentle exploratory music and battle music kicking in when necessary. 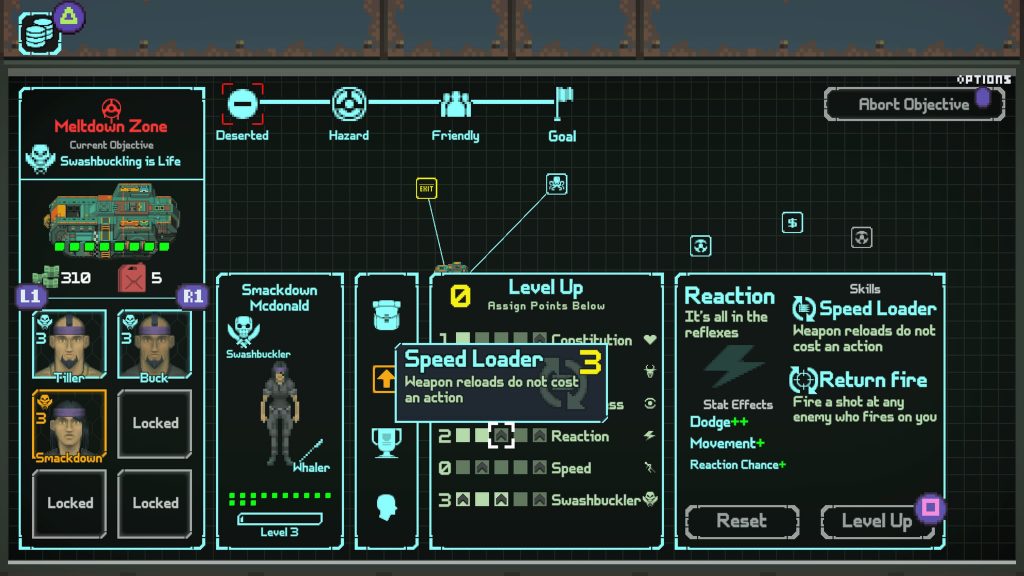 Depth of Extinction has proven a little buggy for me though. I’ve only had one full crash but there are times midturn when the game will just stop for an uncomfortable amount of time. It will eventually give you back control in my experience but it’s always a little worrying when it happens. I’ve had the music fail to play when entering a battle and the trophies for story progression don’t seem to work [EDIT: Good news! This appears to have been fixed in the latest patch]. The cumulative ones do and maxing out certain stats but completing a mission seemingly should grant you the appropriate trophy and yet at the moment no one has them. For a game as long as this that’s a bit of a kicker.

Still Depth of Extinction surprised me. You take a punt on games which you like the look of, whether they remind you of other games or just have an interesting gimmick and the majority of time you’re grateful for the experience but they don’t meet your expectations. In this case though, although not perfect, Depth of Extinction exceeded my expectations. You wouldn’t expect a 2D, indie title to match the behemoth that is XCOM, and it doesn’t, but it comes far closer than it has any right to. Certainly closer than other clones I’ve played with bigger budgets. 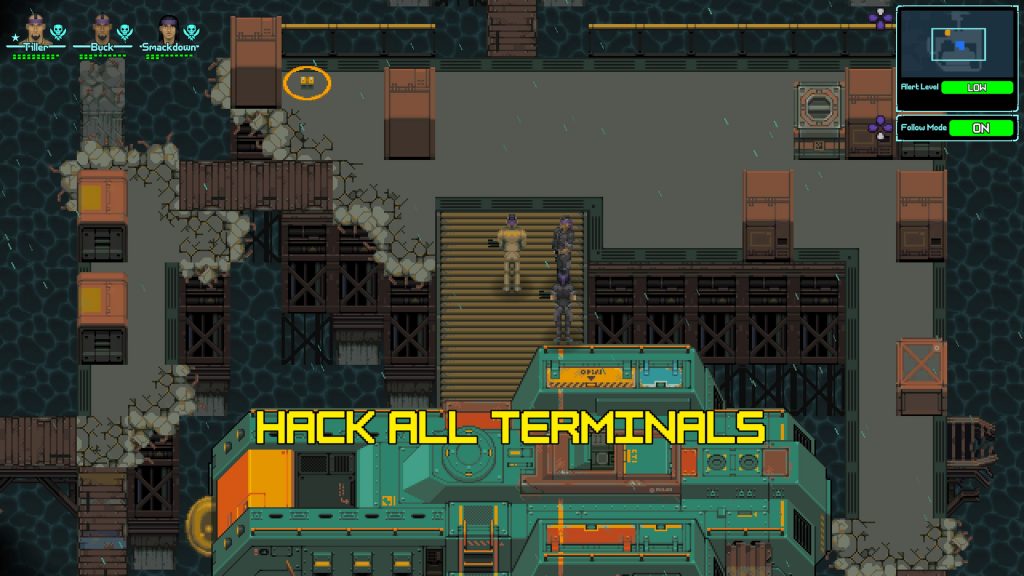 So if you enjoy the elements of other games which I’ve discussed in this review then you’d do far worse than giving Depth of Extinction a try. I’m not sure it needs to be as long as it is and the battles could be broken up a little more but it succeeds where it counts, with great combat and interesting and useful skills to implement. Don’t let this one evade your sonar.

Depth of Extinction
8 Overall
Pros
+ Great combat
+ Fantastic soundtrack
+ Plenty of useful skills to utilise
+ Follow mode is an excellent feature
Cons
- Some glitches
- Can get repetitive
Summary
Don't let the pixel graphics fool you, Depth of Extinction is a very good addition to the turn-based strategy genre. There are strong FTL and XCOM vibes but it has a few ideas of its own and excels where it counts.