RogueCube is the latest Ratalaika release, this time from Spanish indie Bipolar Dawn. This is their first console release and it’s a fair debut. Incidental loading text informs us that this was originally intended to be a puzzle game, but eh. You’d be forgiven for expecting a typical Rata rinse but we’re happy to report that’s not the case.

To cut short what would otherwise be overlong and wordy, RogueCube is a twin stick shooter of sorts with procedurally generated levels. You move with the left stick and aim with the right. But you have to push

to fire. It’s a little counter-intuitive at the outset, but you’ll soon get a feel for it.

As well as the levels being procedurally generated, the weapons you collect throughout are randomly spawned. Some are more useful than others, though this is partly dependent on the characters you choose at the outset. 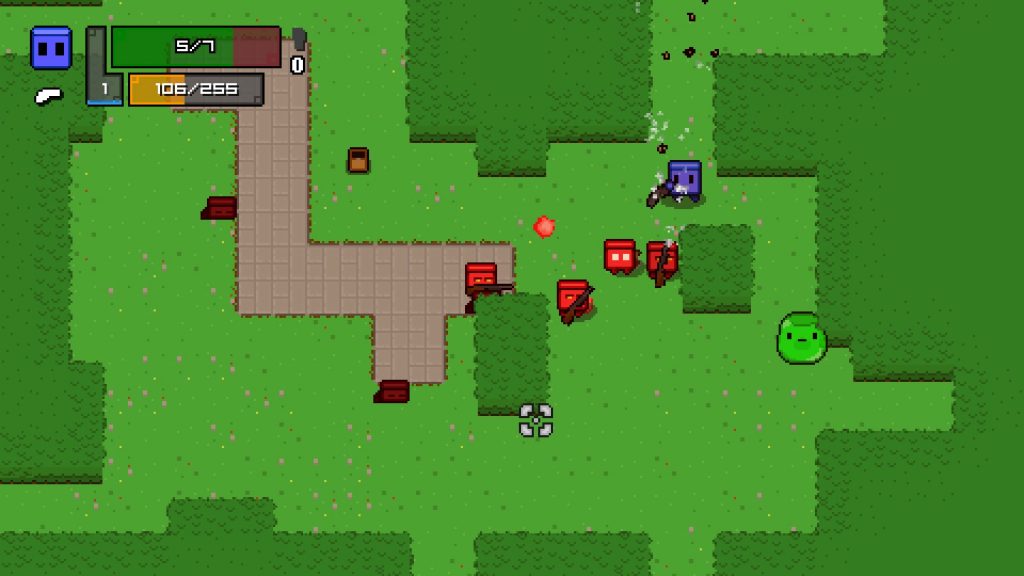 Each of them has distinct traits that you’ll get a feel for, except for Blue who is just  a basic guy with no extra skills. Orange has high accuracy but lower ammo and Purple does higher damage but at a cost to HP. As you progress you’ll unlock extra characters who are probably more useful.

For example the ninja is incredibly adept with melee attacks and can deflect bullets with a well timed katana swipe. Though you can’t pick up any additional weapons, your survival being reliant on speed and killing enemies quickly. More useful is Sam who can’t melee for shit, but does additional damage with guns. The duck is a bit baffling in terms of not being fundamentally different to the base characters but has a useful alt fire, a deployable shield. Handy when things get hairy. 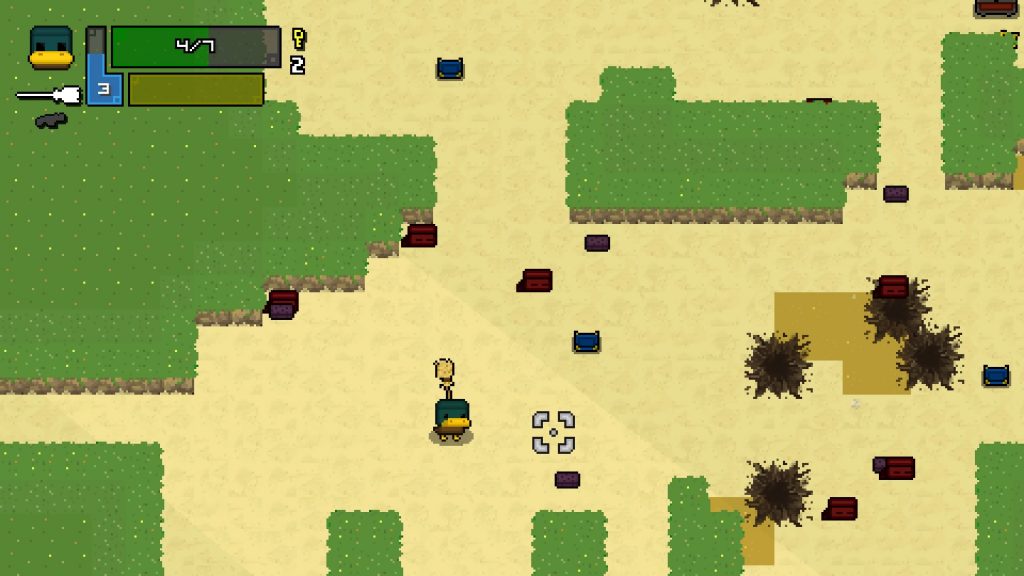 As we mentioned, you can alt fire with

, though the base characters just jump. We can’t see any particular use for that, but maybe that’s just us.  The ninja is able to teleport and Sam can perform a bullet wave. There are a few weapon classes. Those we remember are standard bullets (pistol, shotgun et al) plasma (rifles & pistols to name a few) and explosive (including bazooka and grenade launchers). You can carry two individual weapons, though generally you’ll be better off if you make sure they don’t use the same ammunition type or you could find yourself literally bringing a stick to a gun fight. Things will go about as well for you as they did on those humanitarian aid ships against Israeli special forces a few years back.

Here’s the thing though, you’ll soon realise whether  your run will be successful depending on which weapons you get in the early stages. The default pistols are OK but the weirder plasma weapons are nigh on useless due to the straightline nature they shoot in and the delay between shots. Two plasma weapons are incredibly handy if you get lucky. 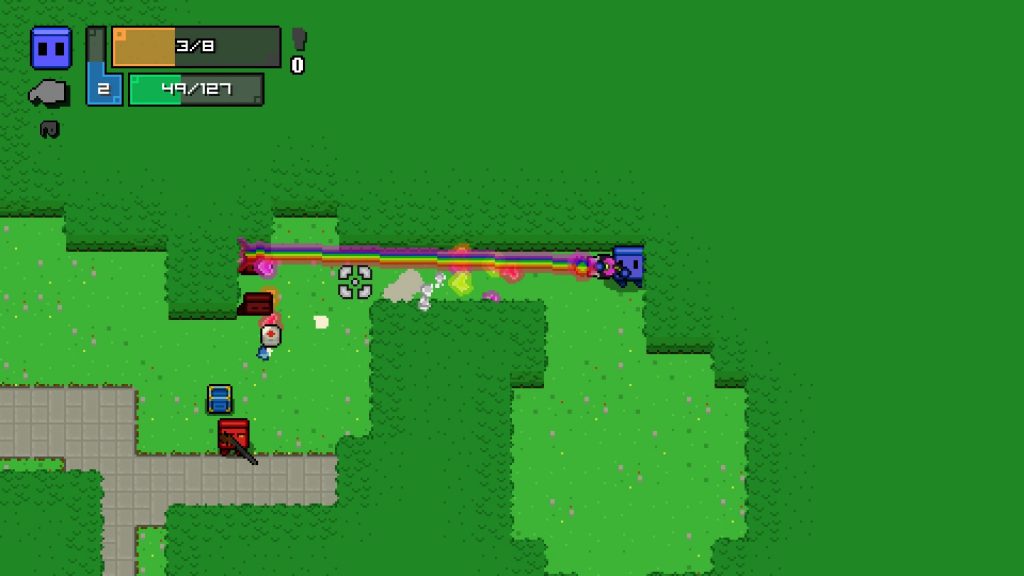 One effectively allows you to shoot around corners and the other, while useful is a huge resource hog, wiping out your ammo in just a couple of shots. Think of it as an analogue to Doom‘s BFG9000 in that it’s useful but you won’t be using it too much. But the corner gun is remarkably frugal in terms of ammo usage and you’ll be able to progress much further if you’re lucky enough to get it.

Some of the other special weapons are cute novelties but you can end up dying by your own hand, so you’ll laugh at the daft names but learn to steer clear. The same applies with some melee weapons, you’ll see them in later levels but they’ll generally appear at a point where you have no need for them.

You see, when you die, however cheaply the death comes, you’ll be done and have to restart from the beginning. This has led to our not getting the platinum straight away, a rare thing for a Rata game, but that’s more due to the random nature of the spawns and our not having reached the level with a boss we need to defeat to unlock the final trophy. 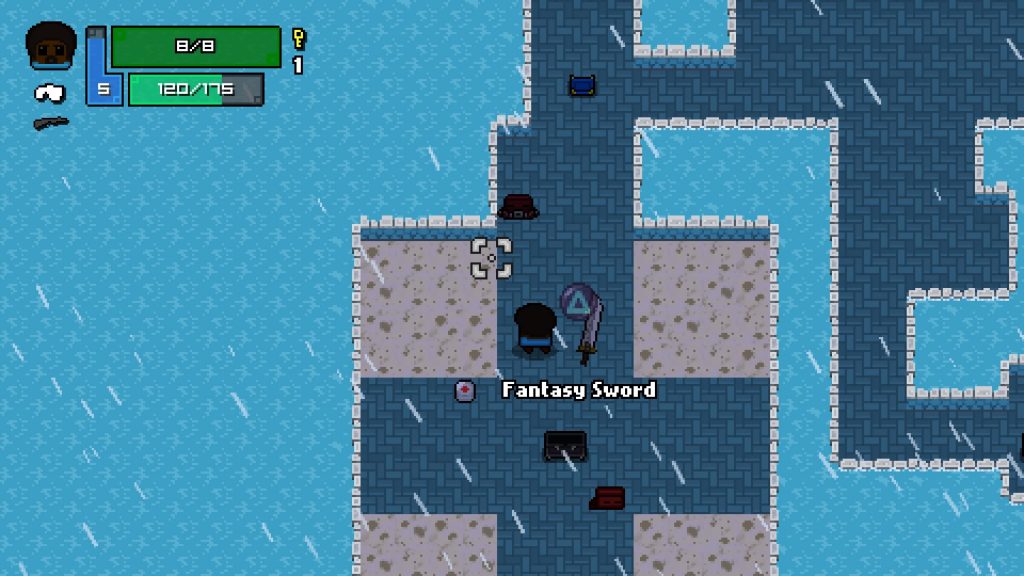 There’s a few bosses you have to see off, the first being a dog thing. At least we think it’s a dog anyway. It’s called Rufus anyway. A subsequent boss is called The Plant, though we haven’t reached them yet. Perhaps the final boss is Chaka Khan, but there’s no trophy text to tip us off. If your weapon is underpowered, there’s a possibility you could still beat a boss and find yourself on the next level without any ammo and succumb very quickly. Run over. It can feel a bit harsh.

In fairly typical Ratalaika fashion, the trophies will come thick and fast to start with, but in a few cases we found ourselves a little confused as to how we met the criteria. This is no bad thing, but it increased our general feeling of bewilderment. You have to admire Bipolar Dawn’s  chutzpah in including a Daily mission to play. Their confidence is endearing, though in reality most people will only stick around long enough to unlock the platinum. Though longer than usual as it helps that this isn’t a bad game by any stretch. The challenge of reaching The Plant and hence the last trophy being a factor. 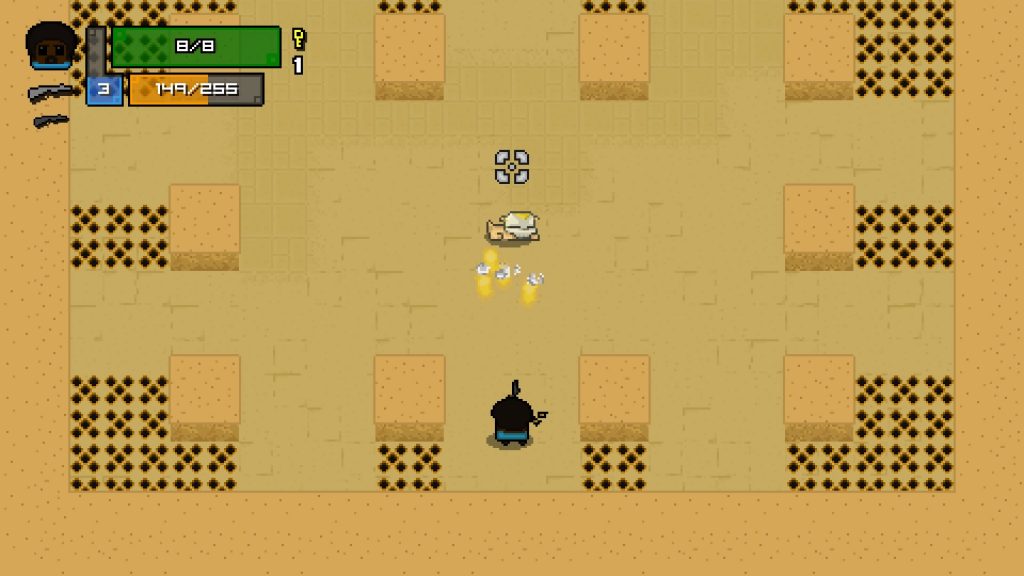 There’s also four player co-op & competitive modes available here if you can gather three other players around your place. We’re glad to notice this trend among indie games lately, as not every multiplayer game has to be online via PSN. Yes, actually owning sufficient controllers is unlikely for many PS4 owners, but it’s definitely a plus.

You’ll find it easier to survive scrolling horizontally or up the screen, though you will often come up short going down the screen. We’re not entirely sure why, but it’s a bit of an annoyance. In addition, the level exit that spawns upon your killing the last enemy can be badly placed and curtail your attempt to mop up all the loot remaining on a stage.

In conclusion, RogueCube is a fine addition to the ranks of cheap Ratalaika games and unlike most of its cohorts, not a simple one and done. Well, certainly not for us anyway. It can be a little harsh and your progress can be wholly dependent on the weapon spawns you get, but it’s fun all the same. Considering the price, it’s mad value.

RogueCube
8 Overall
Pros
+ Bucks the trend of being an easy Ratalaika one and done
+ Mostly fun gunplay
+ Four player local co-op and competitive modes
+ Cheaper than a four pack of beer
Cons
- Success is a little too dependent on RNG
- Alt-fire for the base characters doesn't amount to anything
- Some deaths can feel very cheap
- Not all weapons are that useful
Summary
RogueCube is a better than average Ratalaika release with fun gameplay and four player local multiplayer. There's a few flaws, but when an indie dev can turn out something with this longevity with a small team, it's a good thing. Recommended.