It’s one thing putting out a game at the same time that Red Dead Redemption 2 arrives sucking all of the air out of the industry for a few weeks but it’s especially bold to go up against Rockstar’s redneck ’em up with another game that features cowboys but that’s what Swedish dev crew Three Gates have done with this bull riding title.

I stopped short of using the word simulator there because this wouldn’t really qualify. Instead 8 to Glory is a really a small compendium of rhythm action games that try to convey the thrill of riding half of ton of psychotic cow in front of hollering goring enthusiasts. 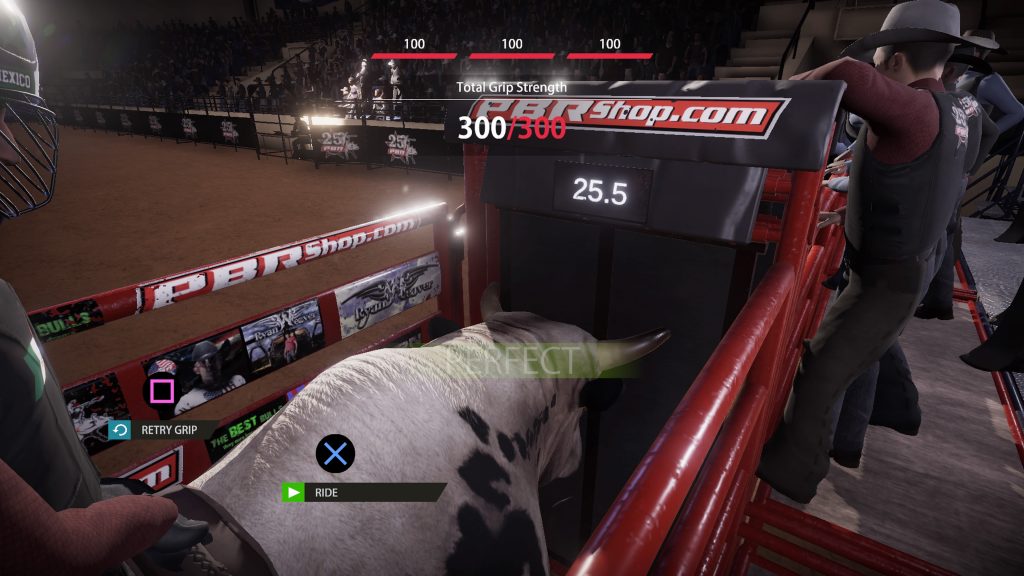 You start off by selecting your rider. There is a large selection of more than thirty officially licensed riders from the PBR (Professional Bull Riders), mainly American and Brazilian with the occasional Mexican thrown in. You can play in one of three modes, the first of which is the campaign mode.

The campaign has 27 events to play through. The first of these introduces you to the basic mechanics of the game by way of text tutorials. These explain the three main phases of each bull ride as you get to them.

The first part of the ride is while the bull is still penned. This is where your rider needs to establish his grip and you this by stopping an indicator as it travels along a line. Pressing

stops the indicator and if you do it within a certain zone, you’ll have a perfect grip. Anything less than that is progressively worse. You do this three times within thirty seconds. It’s not particularly difficult though and you can try as many times as you like within that thirty second window. Think of this section as a bit like an old style golf game.

With the grip sorted, you then get into the riding and specifically keeping your balance. Here you have to tap

to stop another indicator but this time it’s a shrinking, circular one. You have to try to stop the circle several times over the next few seconds. Occasionally you’ll need to adjust your balance with the left stick. The game tells you where to push it, you just have to do it quickly enough before you fall off. Again, this isn’t particularly difficult. 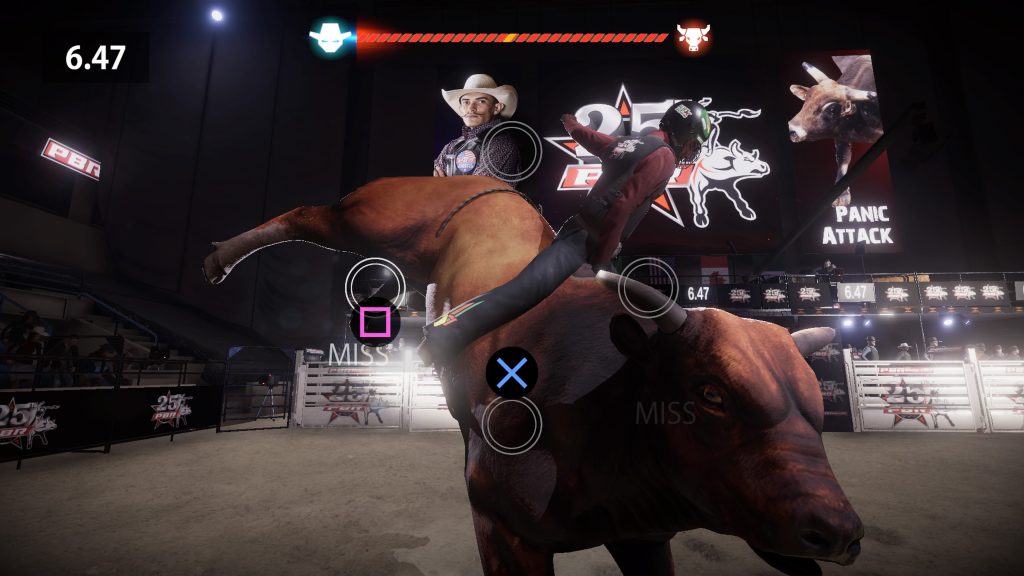 The final QTE section comes in around six seconds into the ride. The bull will start trying to buck you off which will require a little extra effort to counter. For this section, button indicators fall from the top of the screen and you have to hit the corresponding button at the correct time. It’s a bit like Dance Dance Revolution and this is the one section where the game can put up a challenge. Most of the time it’s pretty easy but sometimes the bull will go full ham on you and these sections can easily lead to you failing your run.

The game then settles back to the second mini-game for a while before you hit the eight second target and that is that.  You just need to survive for eight seconds.  That second section’s timing is extended out a bit in real time, turning the eight second run into one that is closer to twenty but that’s all it takes to get through a ride.

So you move onto the next ride. There are four per event, with 27 events as we metioned earlier. Playing on ‘Normal’ difficulty, we never found ourselves outside of the top two of any event. You do get prize money and this can be spent on FIFA-style card packs with each pack offers some clothing and rider upgrades. 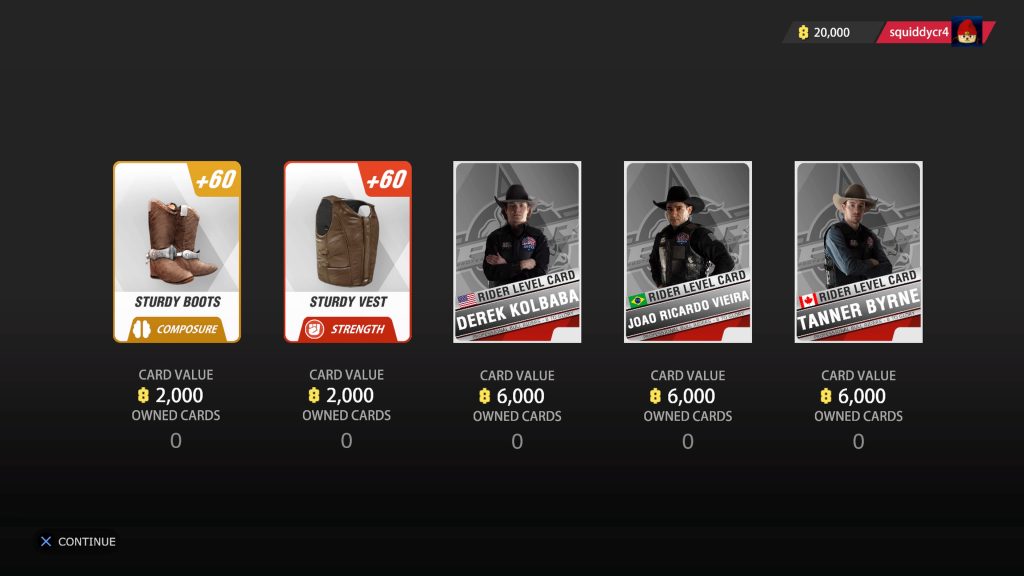 Clothing is odd in that it affects your stats. So a jacket might offer you a +20 boost to your balance for some reason. The more expensive the card pack, the better the stats. You’ll quickly be able to add +60 stat boosts across all three stat categories (grip, balance and strength) but oddly these didn’t make the game feel any easier to play. It seems they just affect your score totals at the end of each run but with events being easy enough to win, this didn’t really have any material difference to the gameplay at all for us. On the plus side, these card packs aren’t subject to any kind of micro-transaction nonsense, so that’s good.

Beyond that, there’s not much else to say about the gameplay. This really just offers under twenty seconds of gameplay and then cuts and pastes it to where you’ll need to put in a dozen or so hours if you want to max out the game’s trophy list. There’s no other incentives for continued play.

The presentation is odd too. There’s a very limited selection of cowboy rock tunes and reasonably basic sound effects which means the audio here is nothing to shout about but the really disappointing thing is the visuals. Everything looks fairly dated with basic character models for the riders and the selection of arenas on offer all look functionally identical. None of them stand out at all and there’s no regional flavour to any of them. The bulls themselves seem reasonably well realised but the animation is pretty sketchy on them with them not feeling particularly weighty or subject to physics. Not that you’ll notice generally as you’ll just be staring at the QTE-style icons that you need to follow. 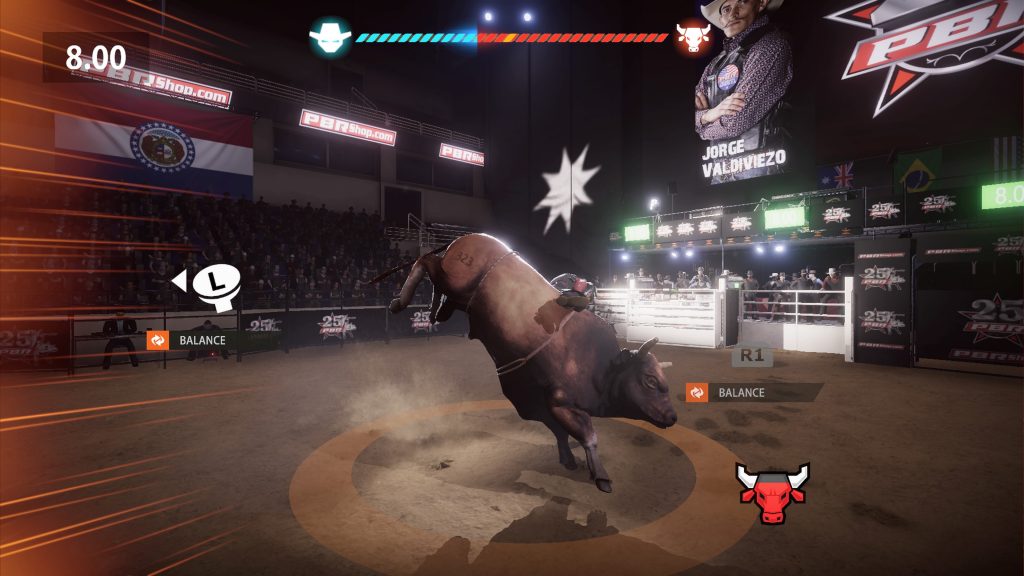 To be honest, the few seconds of actual gameplay that 8 to Glory offers seem like they could be part of some sort of mini-game in a better open world title. If these exact same mechanics were in Red Dead Redemption 2 or even in a mechanical bull in a bar in GTA or Yakuza, you wouldn’t bat an eye at them. They’d work functionally but you wouldn’t describe them as highlights of the game. So to charge almost £25 for it seems ridiculous and while it may seem a bit harsh to criticise a game that does the one thing it needs to do reasonably well, you just can’t release games in 2018 that have all the depth of a Nintendo Game and Watch game from the ’80s.

As such this is impossible to recommend, even if you’re a fan of the sport as 8 to Glory really has very little to do with that in terms of the type of gameplay it offers and if you’ve never had an interest in bull riding before then this won’t stoke your interest. It’s not really the fault of the developers though as there’s not much else you could do with the actual riding part of the game but depth could have been added by adding some sort of breeding or Farm Simulator mode to flesh the game out and maybe they could have had you playing as a rodeo clown or some other support role now and again. But they didn’t and in the end, this game is almost comedically thin and definitely one to avoid.

Summary
8 to Glory is a unique bull riding title but one that offers little more than eight seconds of gameplay. Real life fans won't appreciate the basic rhythm action game mechanics and everyone else will be wondering where the rest of the game is.