theHunter: Call of the Wild – 2019 Edition is last year’s game with two DLC areas (Medved-Taiga National Park and Vurhonga Savannah Reserve) plus a couple of weapon packs. We didn’t review the original game so we’ve come into this cold.

We expected a similar beast to the Gamerscore rinses that are the Cabela series, but what we got in theHunter was an entirely different animal altogether. For a start, this game is beautiful as opposed to functional like the aforementioned competitor. 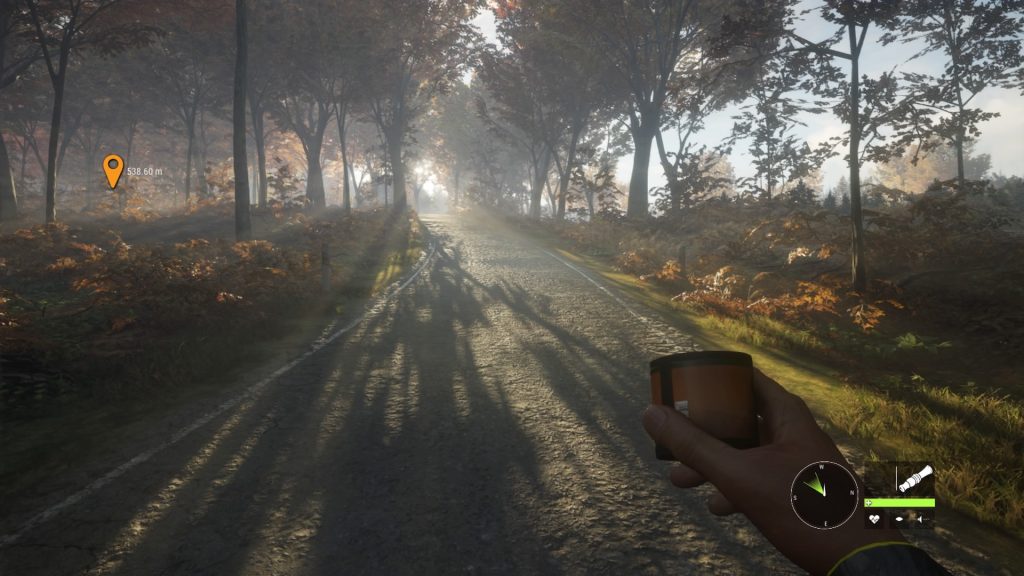 That said, you’ll spend more time marvelling at landscapes as you track animals across the various areas since your quarry often proves elusive. A well implemented tracking mechanism makes crawling through thick undergrowth far more engaging than it truly has a right to be. We spent a good couple of hours following the trail of a fox, it barely mattered he slipped away before we could shoot him. We became very familiar with his excrement and the varying levels of freshness though.

Due to the elusive nature of animals, especially in thickly wooded areas, you always feel like you’re genuinely hunting them rather than being guaranteed to find your prey in a particular area. In fact the scarcity of animals made it pretty hard to get decent images of them for this review, so you’ll have to excuse our blurry screenshots as if we got any closer, they bloody well ran off. 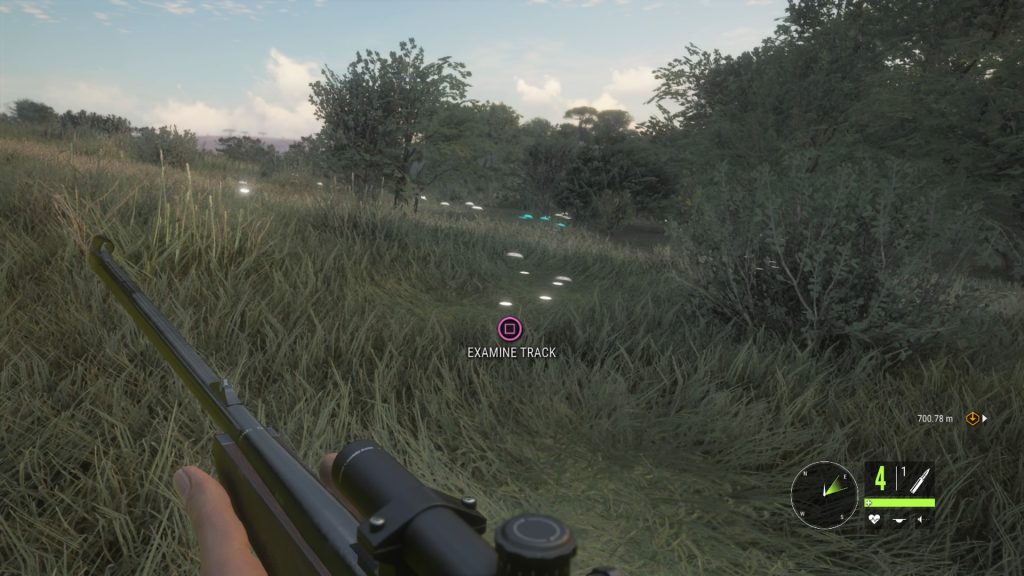 Ethically, playing theHunter is far more palatable and makes you less of a human trainwreck than people doing it in reality. Your post-kill summary shows your precision and rates your hunting prowess, illustrating in detail where your bullet or arrow entered your victim. It stops short of a voyeuristic Sniper Elite style killcam thankfully.

We still felt a bit crappy standing over a moose despite that. The fact we’d followed it for ages after a lucky shot made it bleed out in a bush a few hundred yards away made us feel like there was a strange bond of sorts. Albeit one ending in death for them. 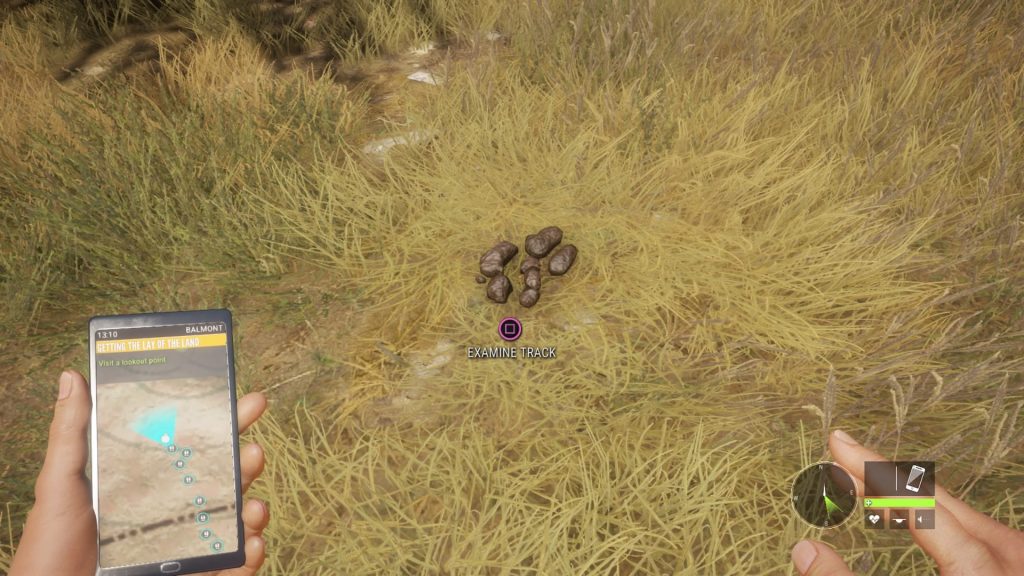 Your game starts in the fictional German reserve Hirschfelden (literally Deerfields). We found ourselves spending the bulk of our time here, mainly as we didn’t realise until hours and hours played that we could change to a different area at will.

As we mentioned at the outset, this game is beautiful. It’s not quite up there with Red Dead Redemption II in terms of graphical fidelity and the animal models aren’t quite as detailed as the game of the moment. Though for a game from a less well resourced dev, it would be churlish of us to expect otherwise. 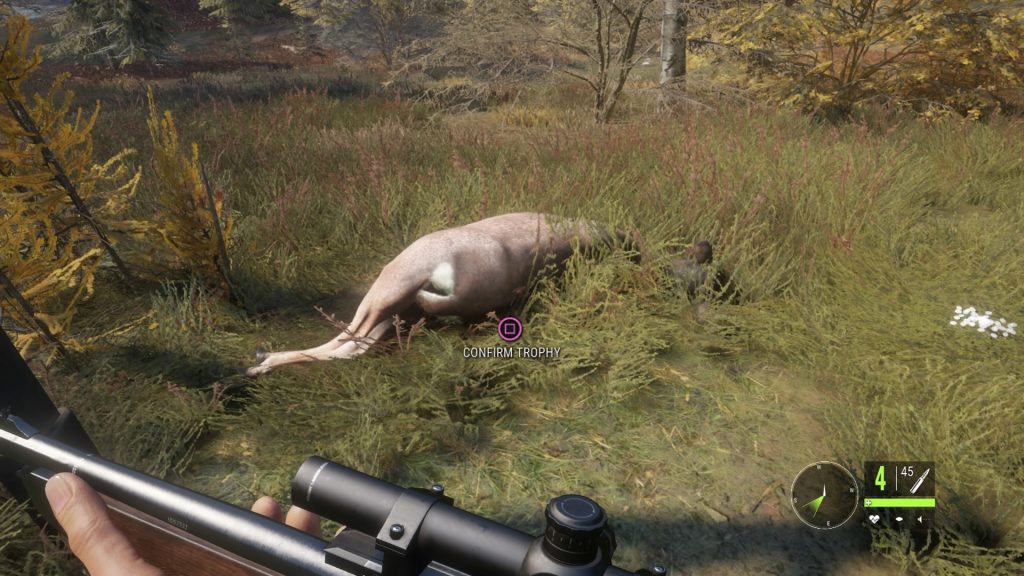 There’s a tutorial of sorts, but we wish the game didn’t feel the need to repeat it when you moved to another area. Cash and items carry over, but not all items seem to. We bought a deer caller and switched to another area but it wasn’t available in our inventory. Annoyingly the cash was still gone so we had to earn it all again to carry on.

If you’ve already played this game previously, this doesn’t amount to much more than the two areas from the original game and the DLC available and so it’s probably worth holding out for a sale instead in that respect. 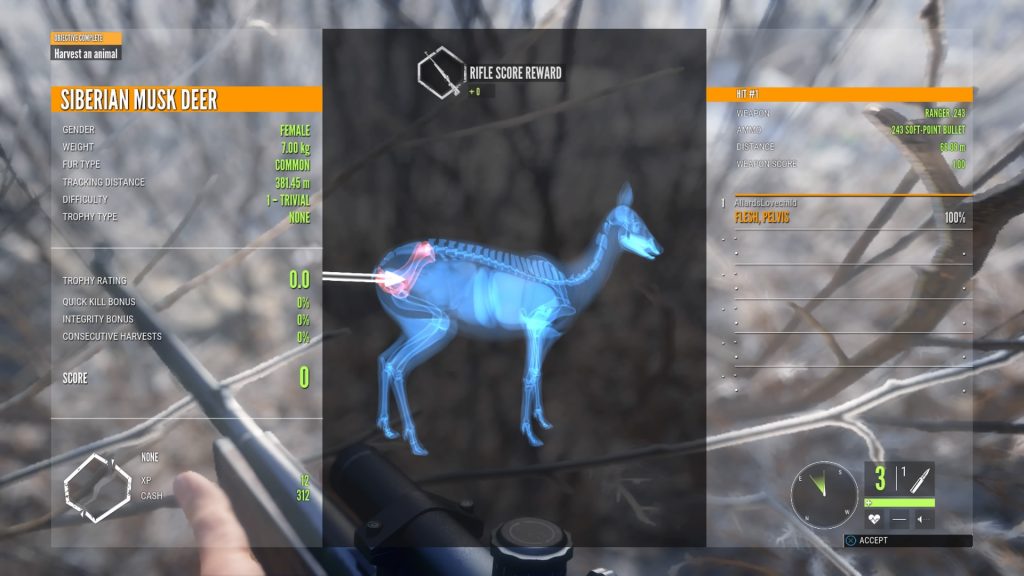 Despite these little gripes, we feel compelled to play. Writing this review is getting in the way of our playing so we’d best wrap it up.

theHunter: Call Of The Wild is a great hunting game steeped in realism, down to the extent that we feel slightly uncomfortable having killed an animal.  Addictive gameplay coupled with the tracking mechanic make for  a game we’re eager to return to.

theHunter: Call of the Wild 2019 Edition
7 Overall
Pros
+ Well implemented tracking mechanic
+ Impressive visuals
+ Lets you hunt without the grimy aspects
+ Lots to do
Cons
- Occasional glitches
- Tutorials are mandatory in each zone
- Animal models aren't as detailed as you might expect
- Nothing really new for existing players
Summary
theHunter: Call of the Wild 2019 Edition is an accomplished addition to the hunting genre, steeped in such realism that you'll have your work cut out for you if you want to find your quarry.