I feel like I’ve heard about plenty of Rollcage successors but GRIP‘s certainly the first one to come to my attention. Having not played much of the inspiration (beyond a PC Zone demo disc), I don’t really come to GRIP with a significant point of reference. Despite this, the premise of a disorienting, non-stop racer appeals to me. Caged Element take up the task aptly. 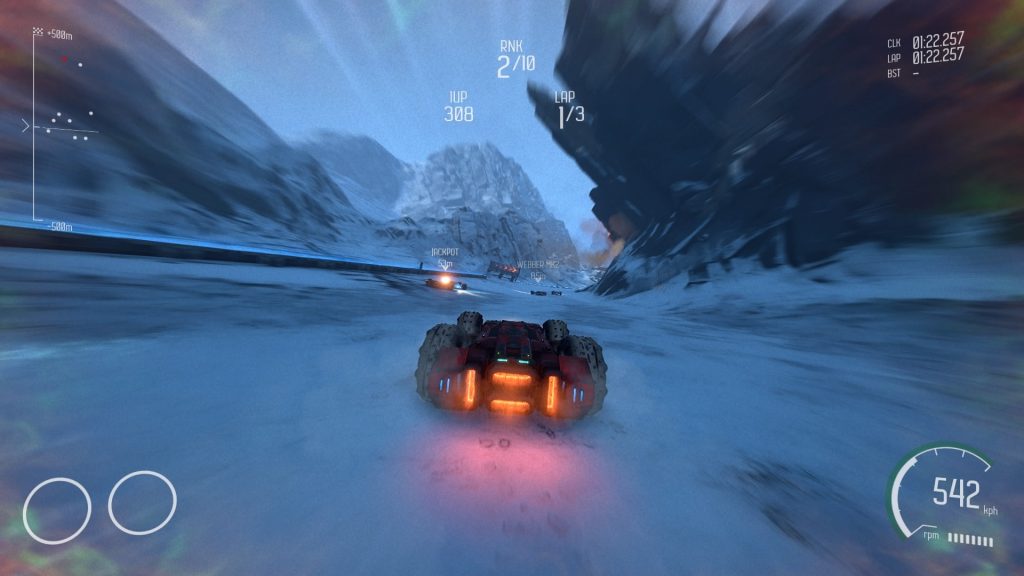 With an abundance of content, GRIP aims to deliver plenty of reasons to race and compete against AI or with others. There’s plenty of variations on the racing theme with eliminators, speed demon, ultimate races and so on. Each have their own tweak on the rules and available power-ups. Deathmatches deliver me the most joy with all contenders placed in a wide arena and a selection of weapons to deal damage with. Variety is the spice of life and Grip appears to have plenty of it. Even in tournaments that focus on single event types, the way races can play out is unpredictable and tense.

The campaign of GRIP is lengthy and pretty challenging. The initial events task you with finishing and it can feel relatively relaxed as you try out some circuits, get introduced to new event types and unlock new vehicles. Four tiers in, the ante gets well and truly upped with progression now being tied to placing well in events. Choosing your vehicle takes on more importance, depending on the event. You might want a robust car to absorb damage, focus entirely on speed or look for something more balanced. The collection on offer has a nice variety and, whilst you can’t upgrade them, you can customise their paintjobs, add liveries and change tires. Whilst it’s purely cosmetic, I’ve found some areas make visibility a little troubling. Red cars do not contrast well with magma caverns. 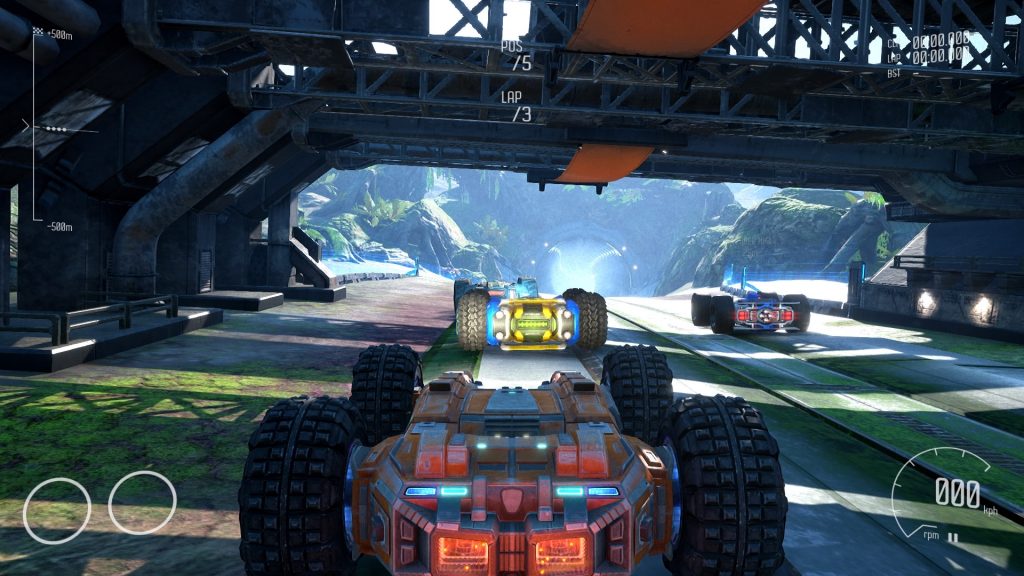 Whilst the challenge does ramp up, I find the racing compelling. Most events are races which involve a number of plentiful power-ups. A lot of them offer offensive options to turn the tide against whoever is in front of you. Most of them operate as intended. Machine guns look to attack the tires of opponents and help clear a path whilst missiles are great for taking a single racer out. Your only defensive option is a handy shield which I tend to use sparingly. If you’re in the lead, it’s a valuable tool as you listen out for the telltale sound of impending danger and you can deploy it at the last second to nullify a hit. There’s others that look to deal damage or slow people in your vicinity and most of them have a use. Classic races combine the combat with charging to the finish. 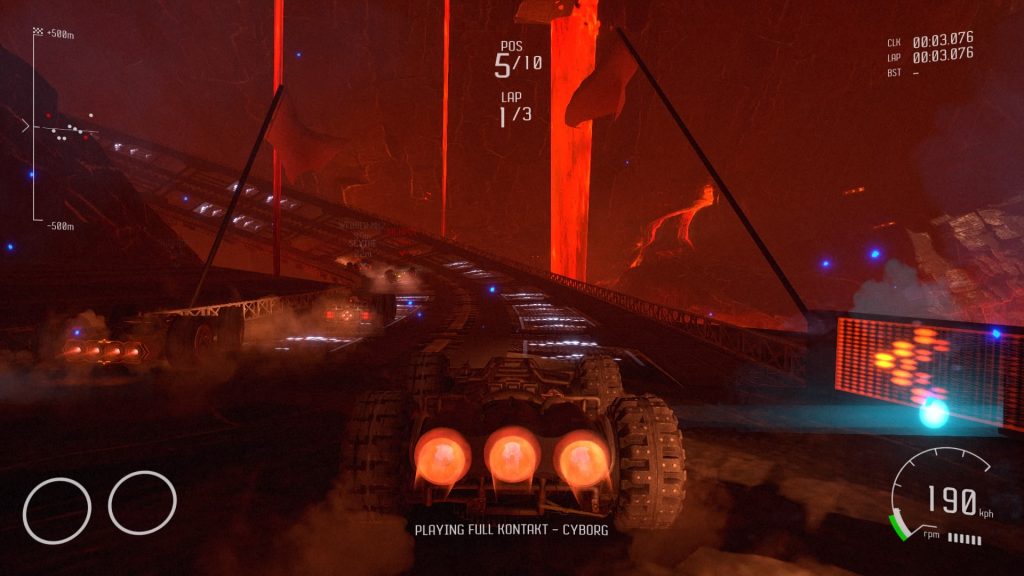 The tide can quickly turn for and against you. I’m not sure if some of it is down to rubber banding but you can safely assume that you’re not entirely safe in any position. Power-ups are scattered throughout the circuits so everyone’s likely to have something in the chamber. AI’s at least willing to take a spill ahead of you and this level of chaos keeps you focused. What I’ve found is that learning the tracks is vital. Starts have a timing element to them which gives you a boost if you hit the accelerator as soon as the flag drops. If you’re in the middle of the pack, your advantage is nullified as you hit whatever is in front. It’s a shame you can’t carve through the field with it.

Tracks twist, turn and disorient constantly with layouts reminiscent of a rollercoaster. There’s branching paths, shortcuts and remembering your favoured path, at speed, is crucial to success. In particular, duels are over if you find yourself falling behind. They zip by with a great sensation of speed but you have just enough awareness to stay in control. They take place in some various, apocalyptic locales which are realised surprisingly well. I do find the physics can get in the way on certain tracks. Some rock-faces jut out and can snag your racer. Stakes are high and swings are often enough that time lost can feel devastating. Resets can punish you further with you being reset further back than I’d like. 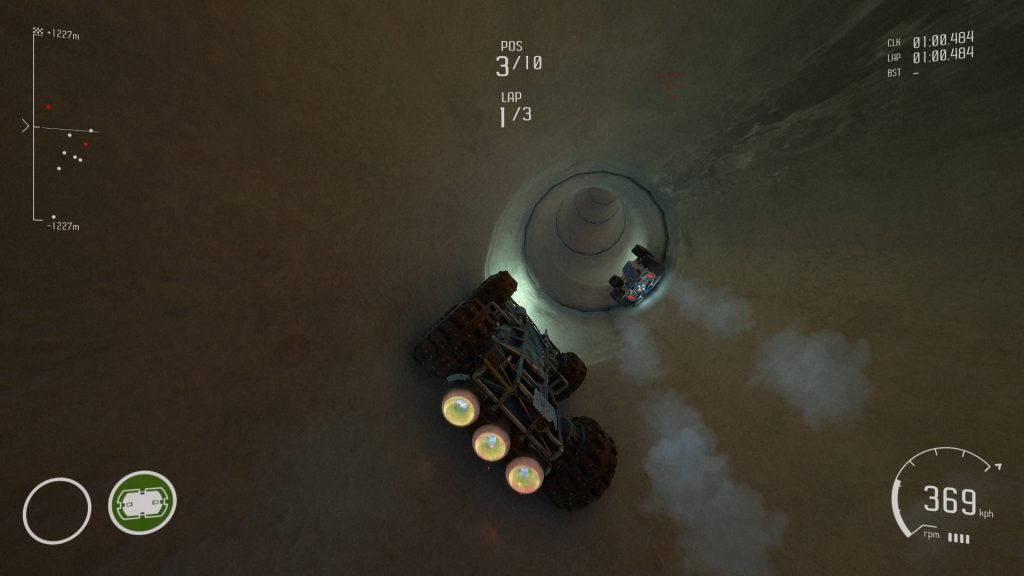 To complement the futuristic aesthetic, there’s an appropriately curated soundtrack straight out of the 90’s industrial and techno genres. It fits perfectly with the quick tempo of the action. I’ve mentioned the ominous beeping of incoming missiles provide plenty of apprehension and the power-ups all sound different and punchy. Your display does well to convey position in the race without encroaching on the viewing experience. Overall, there’s a nice, clean presentation that’s cohesive and clear enough to follow.

I keep coming back to GRIP, despite some of the more curious decisions. There’s a raw, enjoyable excitement to the racing that makes me want more. It’s a pity the challenge becomes a little too much for me, especially concerning duels. It looks and sounds great with plenty of content to work with and, rather than feel like an homage, GRIP seems to surpass the inspiration quite well.

GRIP
7 Overall
Pros
+ Great soundtrack.
+ Racing is competitive and compelling.
+ Plenty of content and modes to dive into.
+ Good, twisty track design.
Cons
- The campaign takes a sharp difficulty spike and never lets up.
- Too many opportunities to be frustrated by relentless AI competitors.
- Plenty of trial and error involved in learning new tracks.
Summary
GRIP comes together nicely. There's a bounty of content on hand which, providing you can deal with the frustrations of competition, prove fruitful and rewarding. The core racing keeps me going through a campaign that can border on exhausting. There's a lot of trial and error involved but it's compelling enough with a solid presentation to keep my foot in the door.