Yars: Recharged is the latest in a series of classic Atari title remasters that has already seen Gravitar, Asteroids and Breakout getting the ‘Recharged’ treatment.  This one is, of course, an update to Atari’s quirky shoot ’em Yar’s Revenge, the famously odd Atari 2600 classic.

Here’s the thing, we’re not American and therefore we never much liked the 2600.  However, we did put a lot of hours into these games thanks to the Xbox 360 Game Room thing that was mostly awful arcade games and 2600 ports and of all the games we don’t much like on the 2600, Yar’s Revenge was one of the worst. 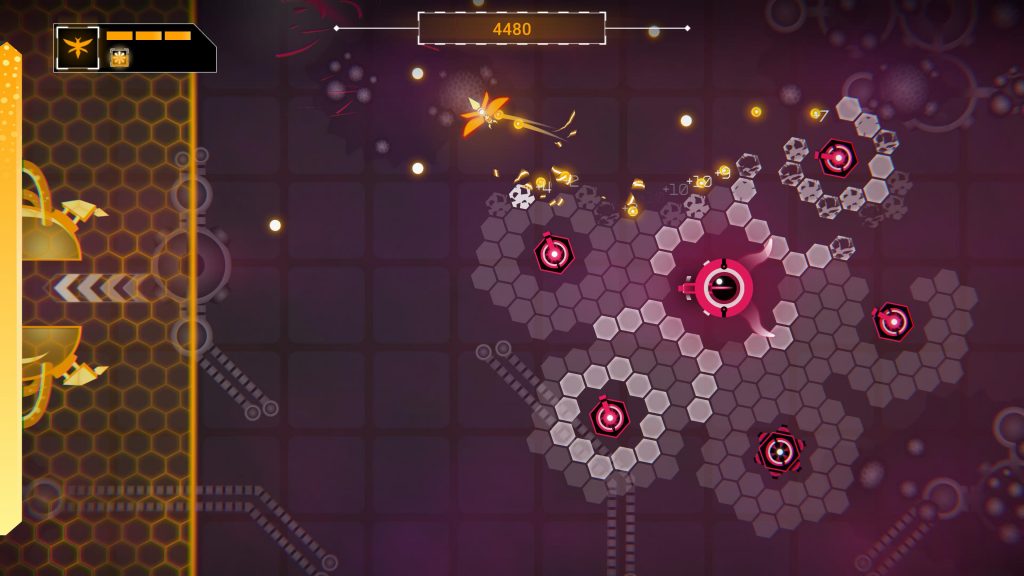 Now that might not sound like solid ground to review this update from but thankfully Lithuanian coders SneakyBox have updated the game to where it just about barely resembles the original and that’s no bad thing.  Instead of a clunky shooter with that weird wall of pixels and those shitty homing bullets, what we’ve got here is a cleanly-presented twin-stick shooter.

Anyone who has ever read a review of a twin-stick shooter on here knows that one thing we really appreciate is when the right stick shoots as well as aims and, thankfully, that is the case here.  There are no other controls (aside from the left stick for movement, of course) and so what you have here is a nicely distilled down core to build on.  After that it all comes down to the levels which are all based on one basic theme. 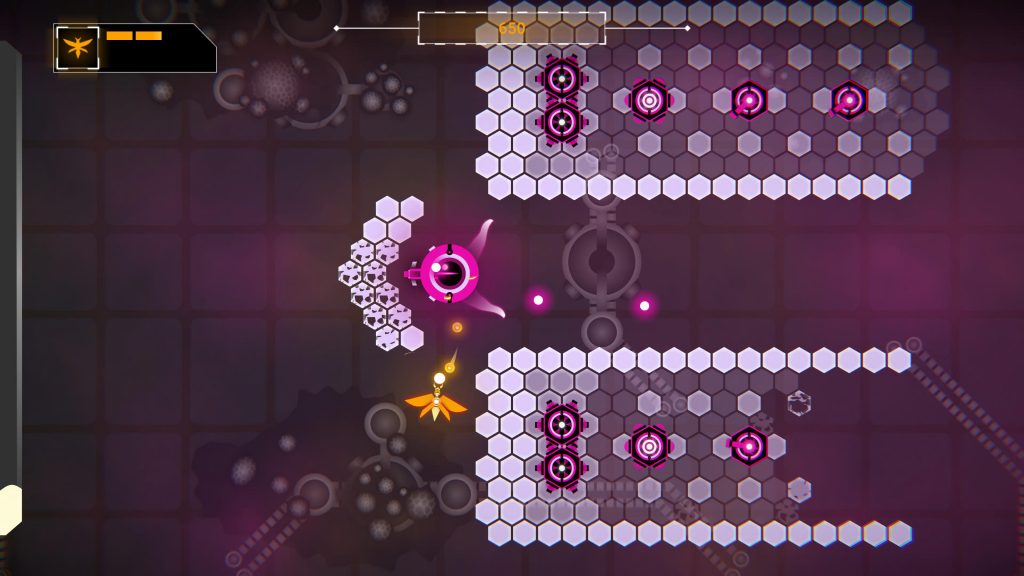 As with the original game you control the weird bug-like creature/ship (Yar) who can freely roam each one-screen level and your aim is to destroy the ‘Qotile’ which is essentially a giant cannon which has two ways of messing with you.  Initially it powers up various smaller guns which  fire bullets or lasers at you and these will rob you of one of your three lives but the Qotile’s other function is that periodically it’ll fire a giant bolt at you that’ll outright end your game no matter how many lives you have left.

To clear a level, you just need to destroy the Qotile but this isn’t as easy as it sounds.  It is impervious to the normal damage that your Yar deals out.  Instead you need to power up an energy bar by destroying the small hexagons and extra guns/cannons that are around the level.  Doing this drops yellow blobs that you can collect.  Get enough of them and the ‘Zorlon Cannon’ appears on the left side of the screen.  When that appears you can fly into it and it’ll let you fire off two massive shots and these are the only way to damage the Qotiles.   On later levels though you may get either multiple Qotiles or they’ll be a bit stronger than earlier in the game and might require more than two shots to take down. 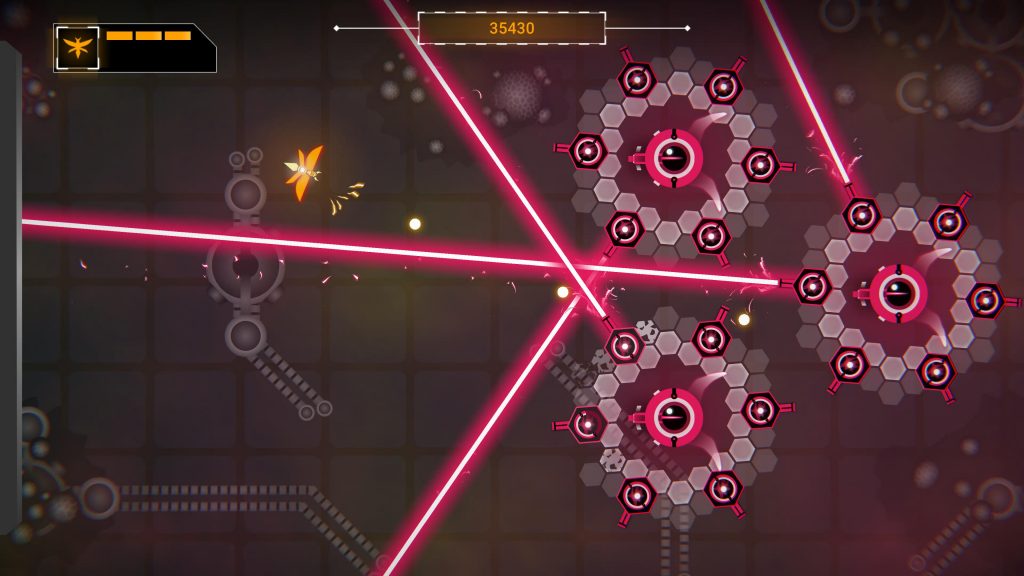 Part of the game is just clearing a path through those hexagons right through to the Qotile.  This can be done by shooting them or attacking them up close (which is called ‘nibbling’) but the levels can spiral around so this isn’t all that quick a process.  Also, later on you’ll get hardened hexagons which have to be nibbled through but this can take a longer time which is where the game gets difficult.  There are some levels where you need to spend a lot of time in one place while automated guns shoot at you.

Generally though, Yars: Recharged is playable enough.  The only real downside is that it’s all a little repetitive with thirty or so stages to get through, each one getting longer and longer as you go along.  Initially, it’s all quite enjoyable, if a little easy, and then later on it gets a lot tougher but then requires more strategy to get through and that actually makes it more engaging to play.    Overall though, the balance of difficulty is pretty good but the only issue is when a level drags on a bit.  Especially if you get killed towards the end and have to start it from scratch. 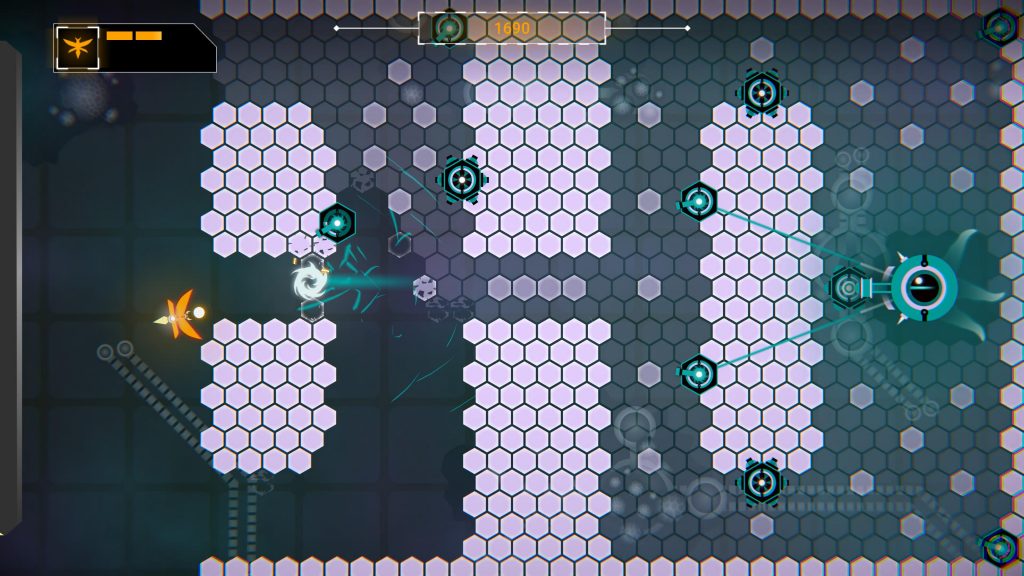 In terms of presentation, the game does okay with the visuals and audio all helping on a gameplay level rather than going for a flashy style.  The graphics are clean and minimalistic with limited colours and not too much in the way of eye candy.  It can get a bit samey but the action is always clear.  The gameplay is enhanced by audio cues which help you to prepare for various hazards and we’re always happy to see (well… hear) things like that in our games.

This is definitely the best of the Atari Recharged series as this game stays true to the original but improves and modernises every aspect of it.  That said, it does rely on a pretty limited concept and you may soon get bored but the level of challenge could be the thing that keeps you playing for much longer than other some of the easy platinum rinse jobs we usually review.

Yars: Recharged
7 Overall
Pros
+ Good fundamental game mechanics
+ Clean, minimalistic visuals work well
Cons
- Does get repetitive
- Harder stages can take too long to beat
Summary
Yars: Recharged certainly improves on the original Yar's Revenge in every single category and we certainly enjoyed it but it does drag on a bit and suffers from a lack of variation after a while.