Cursed to Golf is a pretty good back of a napkin description really. You’re trapped in golf purgatory after having been sent to limbo having been struck down in your prime. From dev Chuhai Labs and publisher Thunderful we have an arcade golf game with a cute exterior that belies its stiff challenge.

You’re introduced to the mechanics of the game by apparently friendly NPC The Scotsman. It stands you in pretty good stead for the initial few holes. Even this point, the challenge becomes very apparent. You see, Cursed to Golf sticks it to you every chance it gets, like you were Lil Wayne in prison. 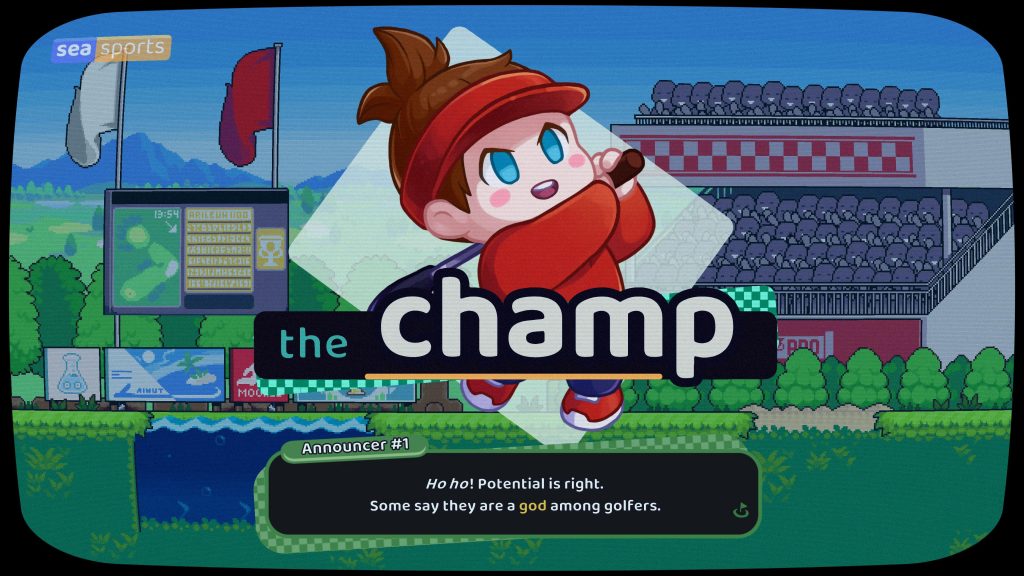 Rather than a conventional golf game with arcade trappings like Mario Golf (our favourite installment being on N64), Cursed to Golf is almost a roguelike with golf trappings. It eschews the usual multiple clubs available in more typical golf games, instead going with a driver, an iron and a wedge.

The driver can be used while teeing off or on any fairways, though the angle at which you can take a shot is quite narrow. Not really much use when the aperture you’re trying to drive through is narrow. The iron is your main club for most shots as it can get you out of the rough too. If you end up in a bunker or trying to destroy an obstacle you’re likely to resort to the wedge. It’s much better for short manoeuvering shots and hitting specific targets. 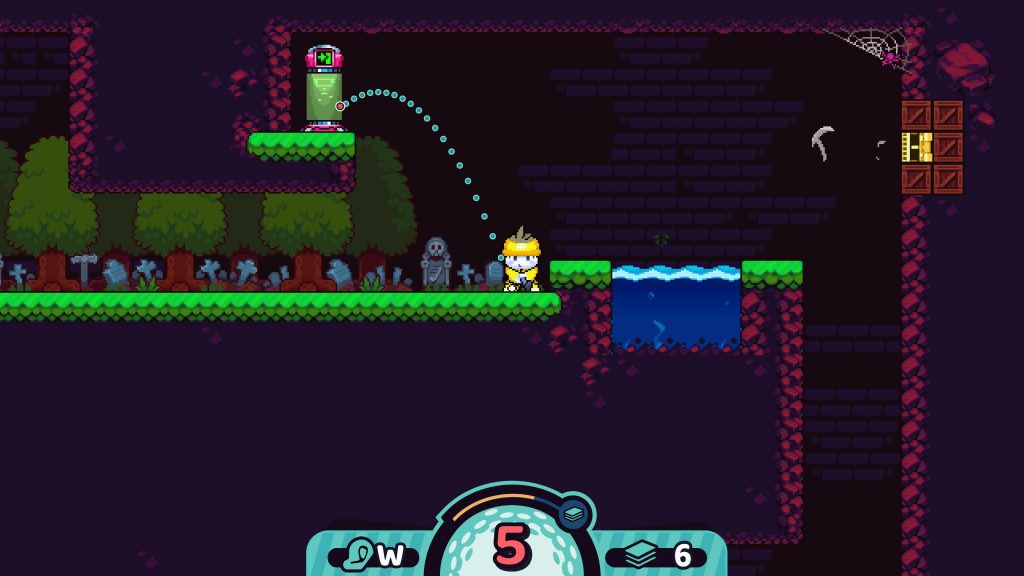 However, rather than the usual par targets you’d expect from real-world golf, you can increase the number of shots by either hitting silver or gold idols. The latter are the money shot as you get four extra shots. You’d think hitting one of those would make life a bit easier, but you’ll soon learn that hope leads to failure in Cursed to Golf.

A fluffed shot or hitting the wrong obstacle will often lead to your undoing and your run will end. After while you’ll twig that you’re on a hiding to nothing and deliberately mess up so the agony ends. Then you’ll try again. And again. So as well as being hard, Cursed to Golf is damned addictive to boot. 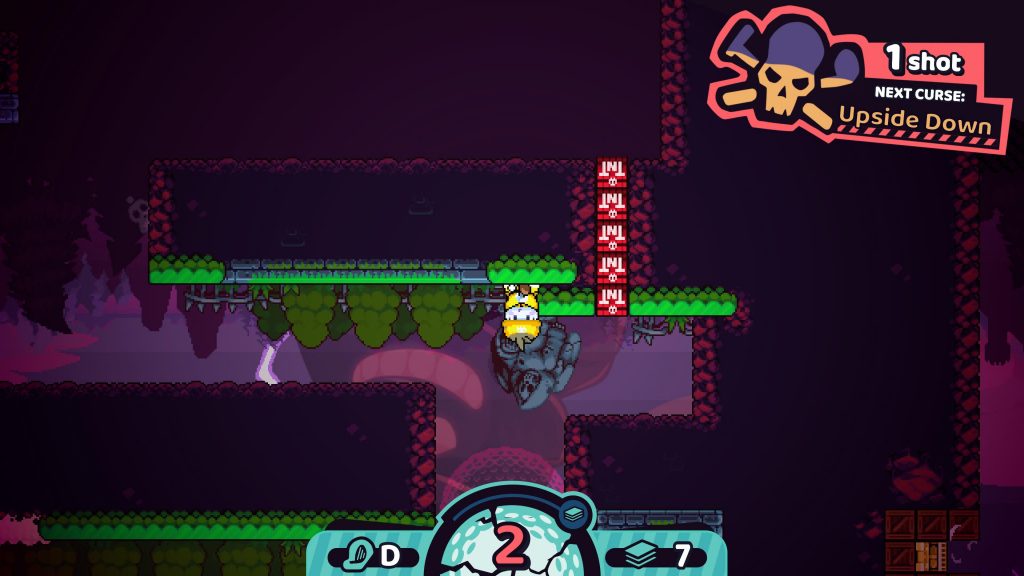 As well as the aforementioned idols, you can pick up Ace Cards. They are bought from the in-game shop that functions a little like the store in FIFA or Madden Ultimate Team, just without having to spend real world money. You can get specific cards at a slight premium or take blind packs with a chance you don’t know what you’re going to get. They’re dead helpful for the most part in terms of giving you an additional fighting chance to get through the levels.

They range from practice shots to gaining extra shots to various doohickeys that affect your ball’s trajectory. Handily, they also carry over from round to round if unused in the rogue-like style. 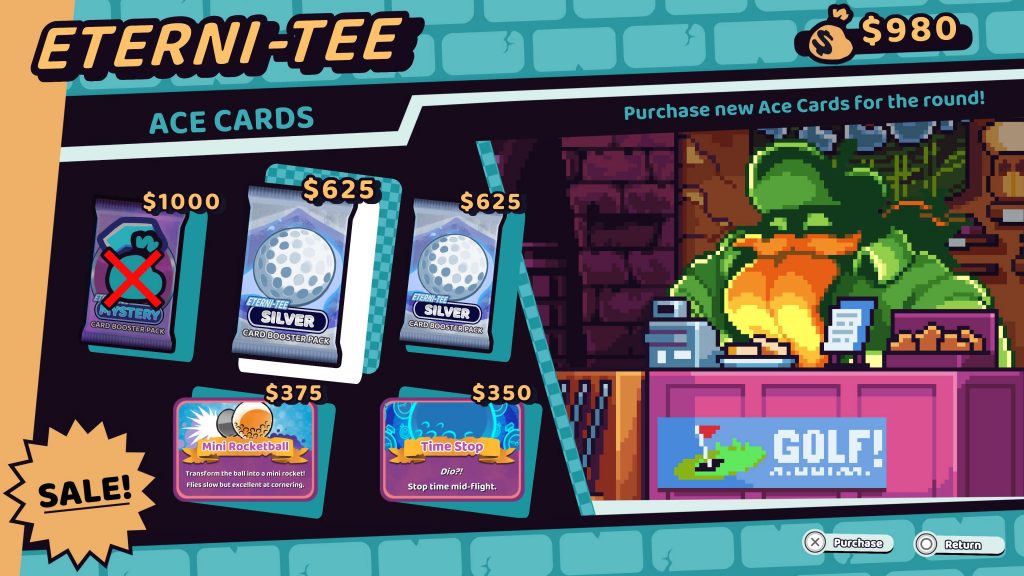 The obstacles include standard enough bunkers and water hazards to patches of rough to impede your progress. Additionally, there’s paths blocked by TNT that you can explode, either by hitting them with a ball or using a detonator ace card. The real bastard of the bunch is the haunted grave patches where you get bogged down and lose a shot. In effect a dry water hazard where you end up back where you last took a shot. Prick!

On top of the hazards, you’ll have cursed holes that show up where a random attribute will screw things up for you. Like reversing gravity or stopping you using ace cards altogether. At the time of writing, we’d not managed to beat a cursed hole anyway. Nor for that matter, had we managed to beat the boss of the first phase, the Scotsman. 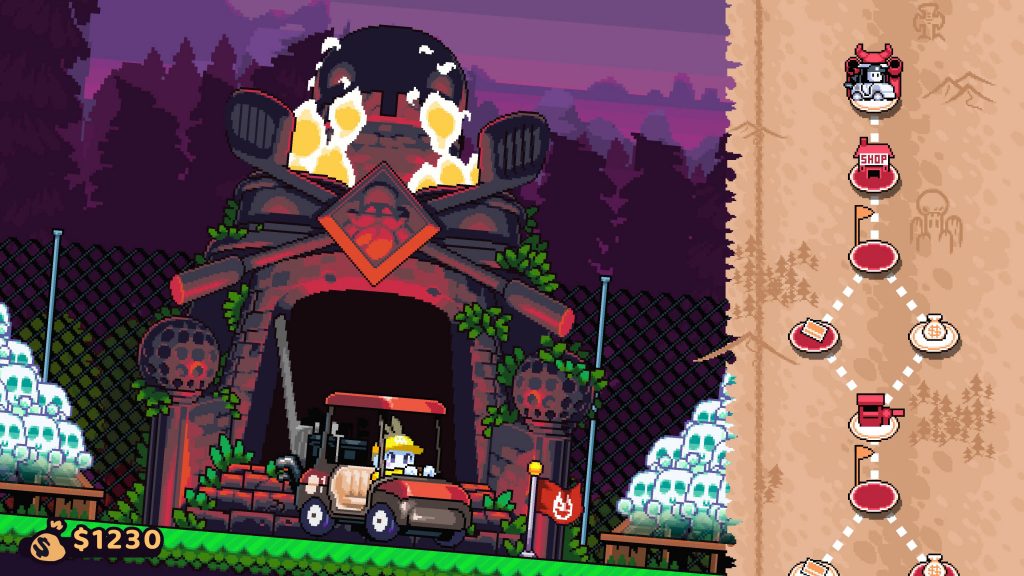 He has the handy skill of being able to drive massive distances, the only leveller being idols that freeze him for a shot so you can try to make up the gap. We came close to beating him a few times but either ran out of shots or messed up a shot. Annoyingly you don’t get the chance to retry a boss, so it feels a bit punitive when you end up starting yet another round.

Checking the leaderboards a couple of days post release, only a handful of people had posted scores where they’d beaten all eighteen holes, so a hat tip to them as well as it confirming what a harsh mistress Cursed to Golf  is. We’ll be back though as it’s such a chilled experience, we see it supplanting our standard Slay The Spire as our kickback and relax game. 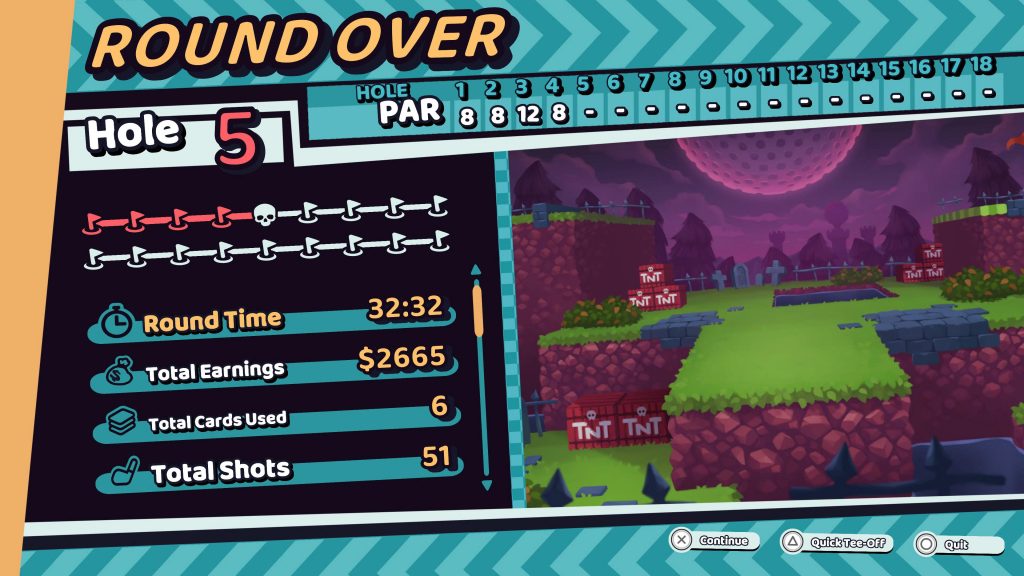 Weirdly, when we finished a round, our PS5 complained it had lost its internet connection. This has only happened while we have played this game, so we can only surmise it’s trying to stop cloud save-game fuckery by momentarily disconnecting you.

In conclusion, Cursed to Golf  is not so much a golf game as a damned tough roguelike with a golfing theme. You’ll do well to beat bosses, let alone complete a full round of eighteen holes without resorting to every trick that is at your disposal. It’s bloody ace though and we look forward to many more hours of play.

Cons
- Unflinchingly unforgiving
- Inability to retry boss encounters feels punitive
- Weird disconnection issues at round end
Summary
Cursed to Golf is a wolf in sheep's clothing.Very much a rogue-like with a golfing twist. You might bounce off like many do the Soulsborne games, but you might get hooked like we are too. Unflinchingly tough at times but also gives you hope you might prevail. It's the hope that makes you have another go. Recommended despite being harder than Henry Rollins and Jimmy Nail combined.