I’m a big fan of Shin Megami Tensei games and their spin offs. I started with Shin Megami Tensei: Lucifer’s Call (aka Nocturne) as it was described as an adult Pokemon at the time. This really sold it short and the Persona series has since gone from strength to strength. The first Soul Hackers game released on Sega Saturn and PlayStation in Japan only, but did receive a 3DS port more recently. I haven’t had much experience with that one, but although there may be references I haven’t noticed you, smartly, don’t need experience with a game from over twenty years ago to follow this one. 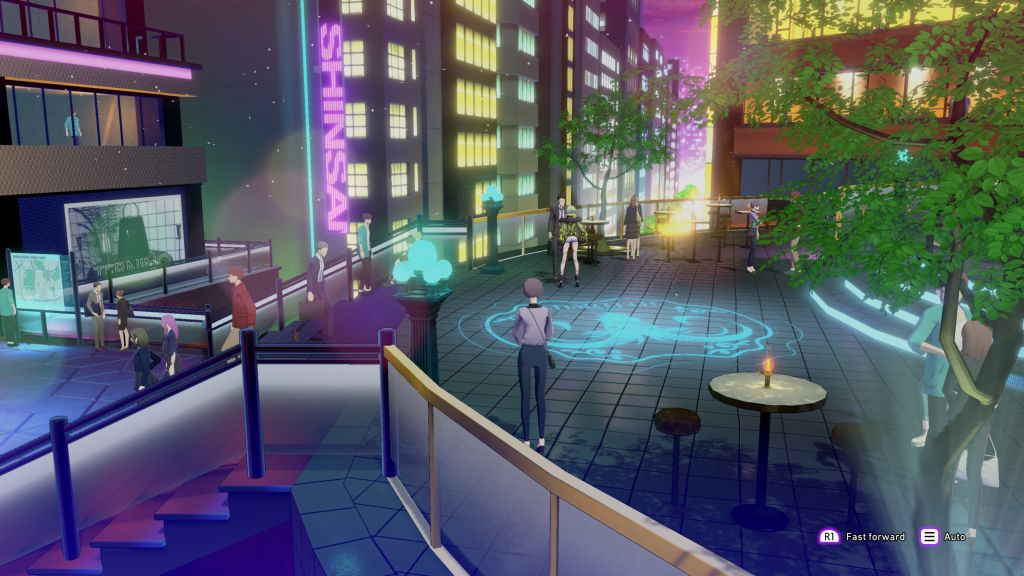 As with all SMT games this is a JRPG and it has a lot of similarities with other titles in the series. At the same time it’s not really directly comparable to any of them, which is a good thing. You take control of Ringo who, along with Figue, is created by Aion. Aion is an AI, a super intelligent being who wouldn’t generally get involved with the plight of man. Five covenants have surfaced however, held by five different people, and if they all come together then it will cause a cataclysmic event.

Figue doesn’t actually fight, providing support from afar, so Ringo goes into the field alone and builds up her own team. Here’s where the game is different from other SMTs as you have a squad of four human characters. Not unusual but each character can equip any demon you recruit. Usually it’s only the main character that can change demons or you have a squad of demons but not here. It does push the demons back a little as they only pop up in certain animations but their influence is still paramount as they provide the special moves and elemental strengths and weaknesses that make the combat interesting. 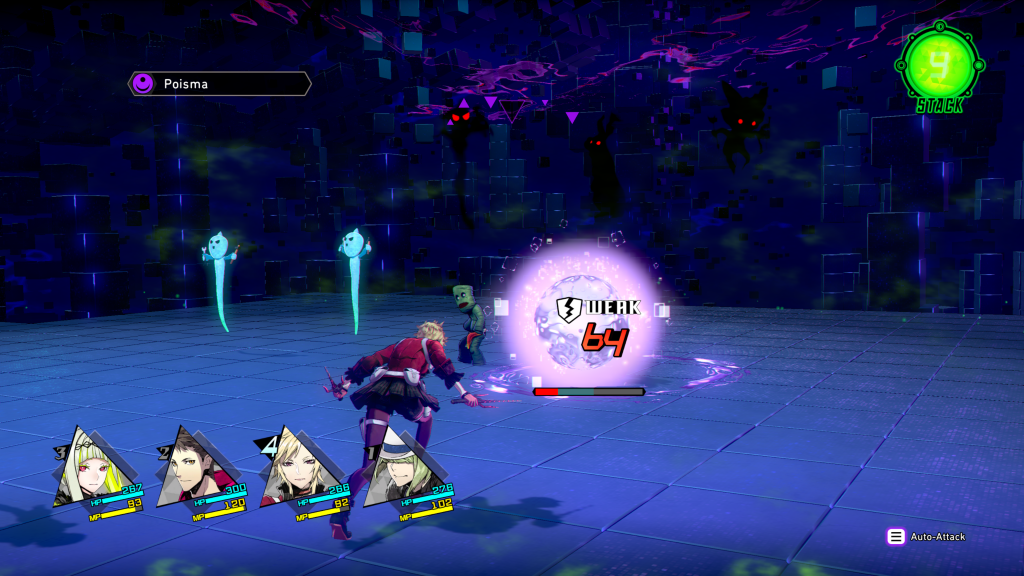 You’ll encounter enemies roaming in the dungeons and you can strike them to knock them down. Run into them whilst knocked down and you may get a bonus hit to start, if they’re stood up there’s a chance that they’ll get the first go. After that SMT veterans will be familiar with the turn based battles focused on elemental strengths and weakness, but the mechanics are slightly different. Rather than increasing your turn count by attacking weaknesses you’ll instead add to a stack. At the end of your turn the stack will then damage the enemy through a Sabbath which basically equates to bonus damage. It’s a fun system that rewards focusing on enemy weaknesses but on the opposite side it does lessen the need to worry about your own elemental affinity as apart from taking more damage the enemy doesn’t gain any advantage from hitting a weakness so it becomes less important.

The dungeons themselves are quite straightforward. You’ll run around exploring what equates to corridors, fighting enemies and encountering your own demons who head out to scout. They may give you items, refresh your HP or introduce you to demons. This is how you get new demons in Soul Hackers 2, they’ll ask for one thing, usually money, items or HP and then they’ll join you. It’s more straightforward than usual and because you’re being introduced to them by your demon you have less control over which demons you talk to but as with a lot of mechanics it’s different, not necessarily worse. 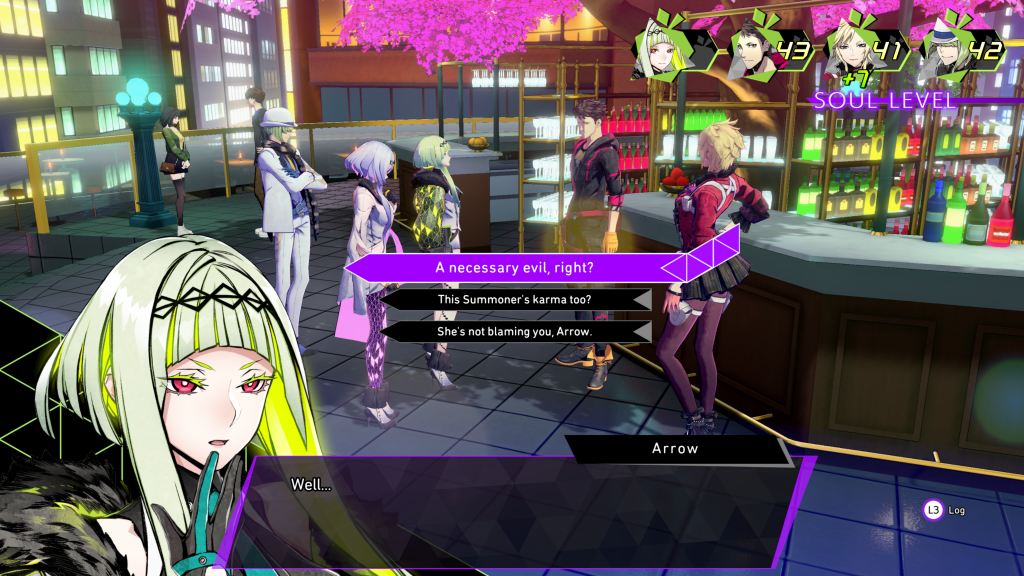 The dungeons are a little too basic for their own good though, with only the fights keeping things entertaining. Two of the first few dungeons are based underground in similar looking areas which is a baffling decision and adds to the copy and paste feel. It’s not helped by the side stuff which comes in many forms but, although the rewards are often great, feels like padding. There is the Axis which is its own location and the biggest in the game but doesn’t change visually at all. It’s just floating platforms in cyberspace which reminded me of Akiba’s Beat which wasn’t a good thing. The side quests are easy to follow, which is welcome, but you get similar tasks over and over.

Luckily the story and characters are enjoyable when you do engage with them. The side stuff does distract you from it for a long while but otherwise the plot moves along at a good pace and the characters aren’t one dimensional, with motives and growth present. In order to advance in the Axis you need to improve your Soul Level with your party through multiple choice options so you get to know them better but this is also streamlined. The cast remains quite small which keeps things focused and thanks to that and good visual design it’s very easy to follow, even with jargon and twists and turns. 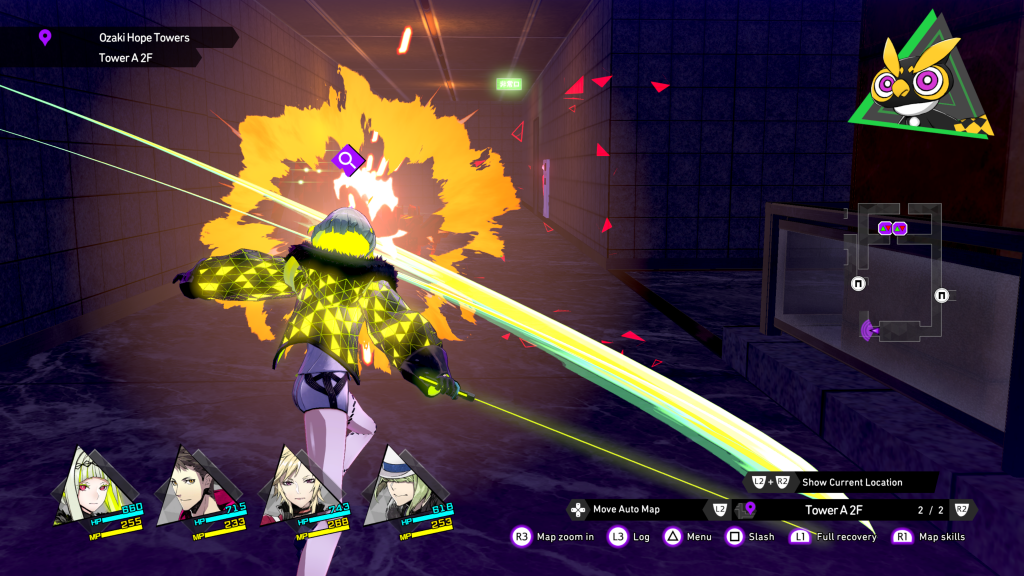 There isn’t too much else to talk about, it’s one of the more straightforward JRPGs which will be a positive to some and not to others. It’s easy to play, though the difficulty itself is more challenging, but the ability to save anywhere negates some of the repetition that could come from losing a battle in previous titles. It’s visually striking with strong colours, at least outside of dungeons and the music whilst not as iconic as Persona is still decent. The demons are nothing you haven’t seen before but collecting them all and fusing new ones is still an enjoyable and addictive experience.

Quick PSA actually – turn off the Loading Tips in the Settings. Loading screens will take about ten seconds with them active and load screens can be quite frequent depending on what you are doing but disabling them basically removes the loading screens altogether which is great and I wish I knew about it sooner. Oh, and set the graphics to High Framerate rather than Quality, it’s so much smoother and difficult to tell what difference there is in the visuals. 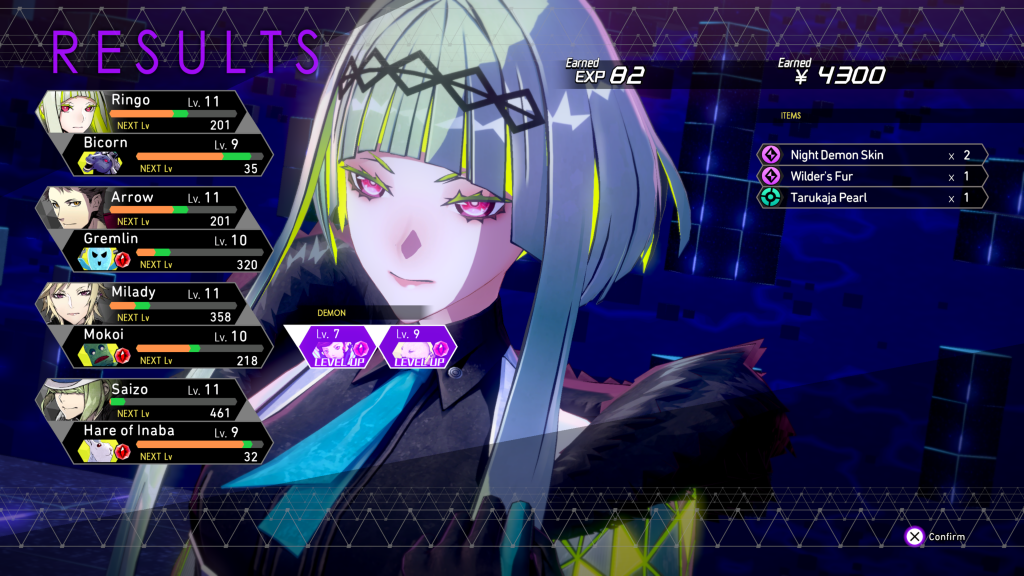 Soul Hackers 2 doesn’t have the wow factor of a Persona game or the epic quest through an apocalypse of a mainline Shin Megami Tensei title. It’s a more staid experience which doesn’t make it a bad one but fans of Atlus should temper their expectations and enjoy it for what it is. Newcomers may find it more forgiving and straightforward, being able to collect all the demons without rock hard difficulty or worrying about in game schedules, but they won’t experience the highs that those games bring either. It’s an enjoyable game and worth a play but it lacks that magic that is often associated with the Shin Megami Tensei series and its spin-offs.

Soul Hackers 2
7 Overall
Pros
+ Enjoyable fighting mechanics
+ Vibrant visuals
+ Story and characters are enjoyable
Cons
- Dungeons are basic and repetitive
- Side activities, especially Axis, feel like filler
Summary
Soul Hackers 2 is an enjoyable JRPG which will feel familiar to fans of the Shin Megami Tensei series. It does do its own thing in many areas which is fine, but the dungeons are very simple and repetitive and the side content feels like padding although the rewards are worth it. It's not the next Atlus classic but it's a fun game nonetheless that may be a more forgiving entry point to the series.