I haven’t play a WWE wrestling game since Smackdown 2 on the Playstation but I’d always heard in passing about Visual Concepts tribulations with the license. I’ve been aware of the animation glitches, the bugs and the general sentiment that the games became too complicated over time. This all culminated with them skipping last year in favour of more development time. Arriving at this with a newcomer perspective, it looks like WWE 2K22 is taking steps in the right direction. 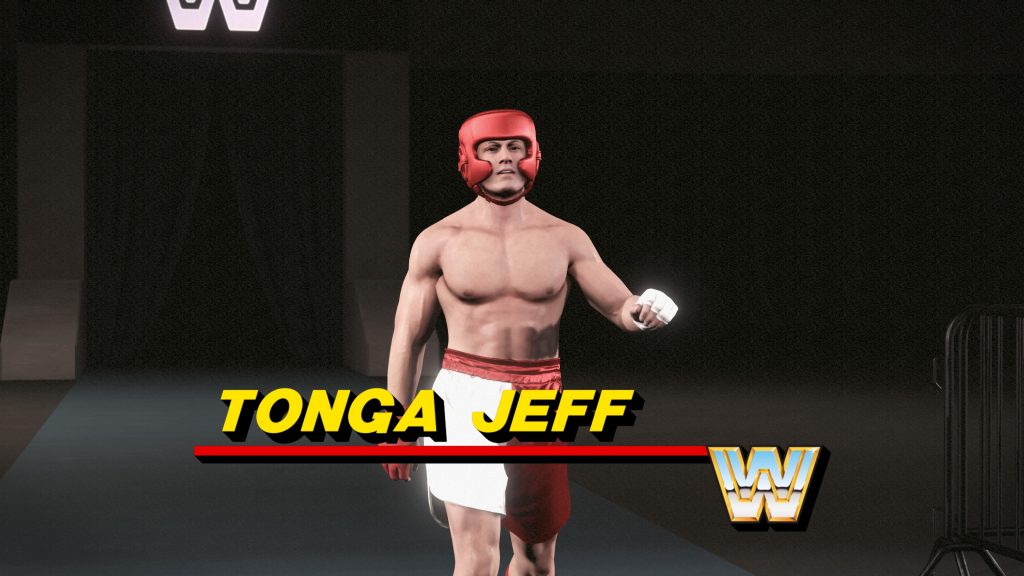 In the ring, things are certainly a little easier to grasp. There is a brief tutorial to play with which seems to focus more on basic strikes. It doesn’t lay everything out there but it does help illustrate the flow of matches. On the face buttons you deal with light and heavy strikes and grapples. These can be chained into combos which allow you to get several hits in and really build up some momentum.

You also have reversals which are triggered by pressing triangle when the prompt above your wrestler’s head demands. Some of the timing on this seems to vary depending on what move is coming. It can be frustrating when you’re trying to stop an inevitable onslaught and you can only counter the first move of a combo. It means missing that prompt can see you spending several seconds waiting for a combo to finish. There is a way to break these combos but it requires you to match what strike is coming up. For example, pressing light attack to stop a light strike in mid-flight. It does, at the very least, give players something to do when caught in a scrap. Unfortunately, I still find it a struggle to time and predict breakers correctly.

What it does lead to is matches that do have a back and forth to them. From the bouts I’ve fought, none of them have felt like squashes and they do tend to start out fairly even. One thing I will say is that animation priority seems quite high. At times, I feel like control is taken away from me so the animations can land as intended. It does mean you’re lowering the risk of the whole fight degenerating into a farce but it doesn’t feel great to start with.  I also find focusing on targets in multi-person matches a little troublesome.  You can switch between opponents and some will effectively draw your attention, but it feels clumsy trying to cycle through to the person you want to engage with. 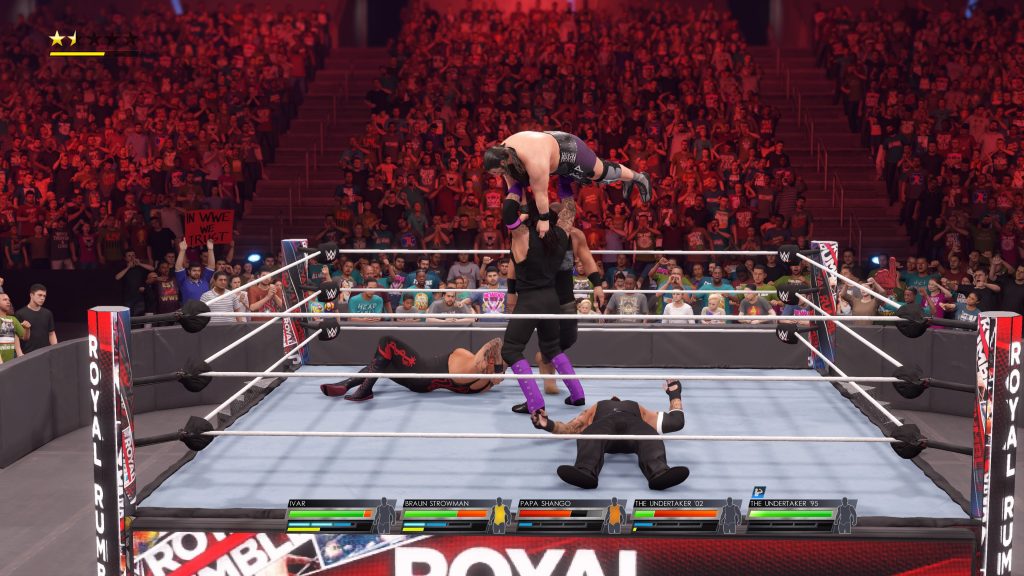 After giving it some time, it feels decent. The fighting game influence is starting to show for the better and, whilst it is still trying to replicate a very specific spectacle, I’m enjoying how it’s coming together. Submissions are much more simpler with simple button mashing required to escape. There’s still a wealth of controls and contexts to get your head around but things are just a little less cluttered and a touch more streamlined.  It’s not as fluid as these games used to be but it leans away from the simulation Visual Concepts tried and failed to create for almost a decade.

Content has, for the most part, something the series hasn’t lacked. WWE 2K22 features a showcase mode for cover star Rey Mysterio Jr. The evergreen Luchador has been part of the furniture for decades and this mode walks us through some of his career high points. There’s 13 fights beginning with his cruiserweight title match against Eddie Guerrero in WCW. It’s an emotional start but the mode tends to fizzle out. Maybe it’s just me but focusing on a person’s career, rather than a specific storyline results in the matches feeling a little disconnected from one another.

The matches in this mode are also heavy on objectives. It can be tricky to get an opponent in the right conditions to tick these off, although it does lead to some great transitions from the game to video footage from the archive. There’s more neat touches like Eddie unmasking Rey if you lose and Rey’s mask is ripped from an earlier assault. That attention to detail is really welcome and it shows the care that went into this mode. Completing objectives gets you unlockable rewards and it’s a good way to spend time.

More time is likely to be spent on MyRise, the career mode for this year. As usual, you can create your character from an extensive selection of parts and suit up for a humble start as developmental talent. Along the way you’ll fight the vast talent of the WWE roster as you look to work your way to the major shows.

Progression seems fairly smooth and you do get chances for extra assignments to boost your popularity and stats. These numbers do tend to come in a trickle but I didn’t find it too problematic. The voice work on this mode is a little spotty. You can tell the pandemic had an influence as audio quality seems to vary from person to person. Edge sounds like he was definitely dealing with whatever mic he could grab at short notice. Performances on the whole seem a little flat, although commentary seems to at least follow the match well.

The mode that’s truly new this year is MyGM. A chance to play fantasy booker is always welcome but this mode feels more like a spreadsheet with it’s cut-down representation of a weekly show. Each week you can schedule two matches and two promos in an effort to beat a rival brand in the ratings war. It’s perhaps a little too simple for its own good with some light finance management in for good measure. It’s not really the draw for me and the same could be said of MyFaction. 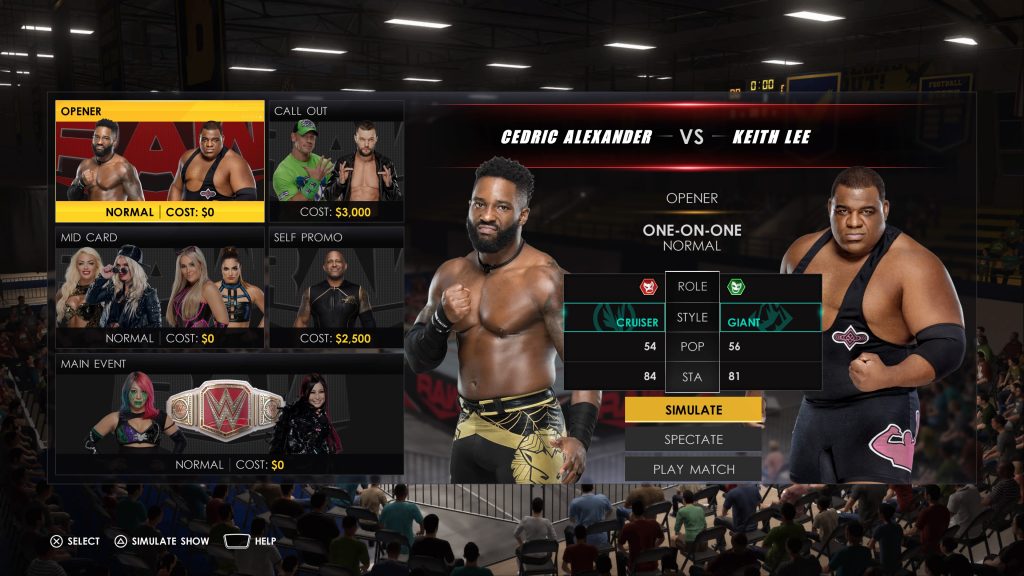 This is WWE 2K22‘s Ultimate Team equivalent that tasks you with building a team of four wrestlers from card packs. Cards come in different rarities and ratings and there’s regular events scheduled to compete against AI factions. You can play this without delving into the paid currency but I always find these modes to be fairly restrictive and hamstrung.

Honestly, I’ve been surprised by WWE 2K22‘s competency. It feels genuinely good to put matches together and work through a career. More importantly, it looks a lot more stable and the extra year’s work has clearly gone on making something more reliable to play. The flourish that the WWE license gives you has been used well, although some talent has had more attention than others and the recent purges make the roster immediately feel dated.

WWE 2K22
7 Overall
Pros
+ Fighting is simplified and much easier to grasp this year.
+ Solid presentation with some nice flourishes in Showcase mode.
+ Plenty of content with a lengthy career mode and an abundance of match types.
+ Has a versatile creation suite.
Cons
- Counter windows feel inconsistent and tricky to master.
- Some of the voice lines in career mode sound literally phoned in.
- Whilst it's simpler, the tutorial doesn't cover all aspects of the controls.
- MyGM looks a little slim and basic.
Summary
The extra year has done WWE 2K22 a world of good as the game appears more stable and enjoyable. The time in the ring has been simplified although might still appear more complex than some would like. Countering windows seem tricky to get a hold of and there are times when you feel the game is playing for you. Despite this, the wealth of content and gameplay should keep people interested. Not quite a return to form but definitely a step in the right direction.