Monster Energy Supercross: The Official Videogame 5 is the latest installment of Italian motorsports sim specialists, Milestone srl’s surprisingly new motorbiking series.  We say surprisingly because despite their being five of these now, this series only started in 2018 and has had a new installment each year.

It seems somewhat redundant even explaining what these games are about but let’s check that box anyway.  This is to motocross what FIFA is to football.  Which is to say that you get the calendar, riders and locations from the official Monster Energy Cross schedule.  And although this series is only five years old, it does come on the back of Milestone’s other biking games such as the SBX, Ride, MotoGP and MXGP games, so they know all about the genre. 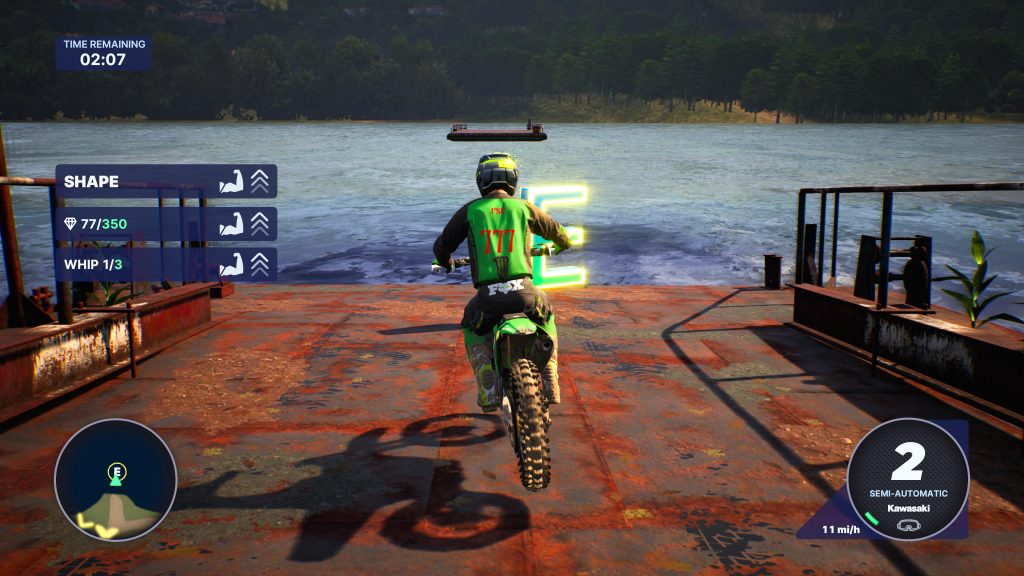 Supercross 5 (let’s keep the title snappy), is a dirt-biking game which means lots of low-traction tracks, dirt ramps, banked corners and rhythm sections.  The key to success isn’t holding down the throttle and just gunning it.  Instead you need to know when to let up on the gas so that you don’t overshoot a jump and land the wrong side of a ramp or hill for example or slide out into a barrier on a turn.

Instead, you need a bit of subtlety and technique.  Take turning for example.   Even if you use the brakes liberally on a turn, you’re still in danger of messing it up.  You also need to lean your bodyweight into the turn too which is done by pushing the right analog stick.  Body weight is also used in mid-air maneuvers, namely whips and scrubs, to help you manipulate your bike into a trick and then pull out of it safely in order to stick your landing. 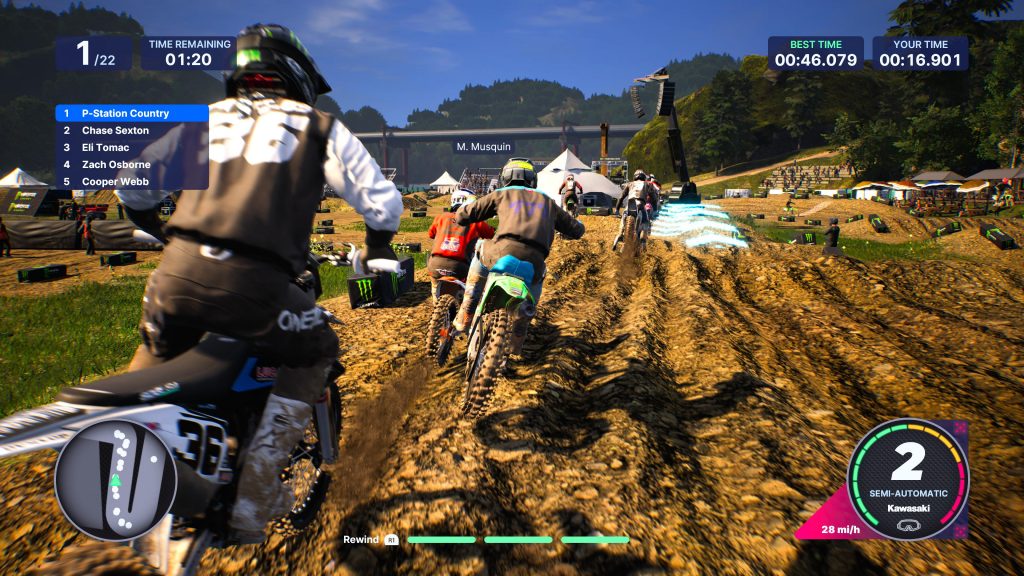 This is a game where the danger of crashing is ever-present.  It’s easy to hit a ramp at the wrong angle and crash out of the track or to get nudged by one of the other 21 riders.  However, Supercross 5 is reasonably lenient about things too.  For example, the foam track markers on the side of the track won’t cause you to fall off your bike unless you land on them, while a handy rewind features gives you limited opportunities to go back in time and fix a mistake.  You also have three difficulty settings too, so you can make the game as easy or hard as you need.

Of course, it all feels very good to play.  The main thing that Milestone get right is the feeling of connection between your bike and the track.  You always feel like the tracks, with their varied surfaces and undulations, affect your riding directly.  This is, of course, aided by the PS5’s DualSense controller which uses its high-definition rumble to great, but clicky, effect while the resistance applied to the triggers gives you a really tangible sense of struggle as you control your bike.  There’s even a sort of revs indicator as your controller’s light goes green, yellow and red depending on how hard you are pushing the engine. 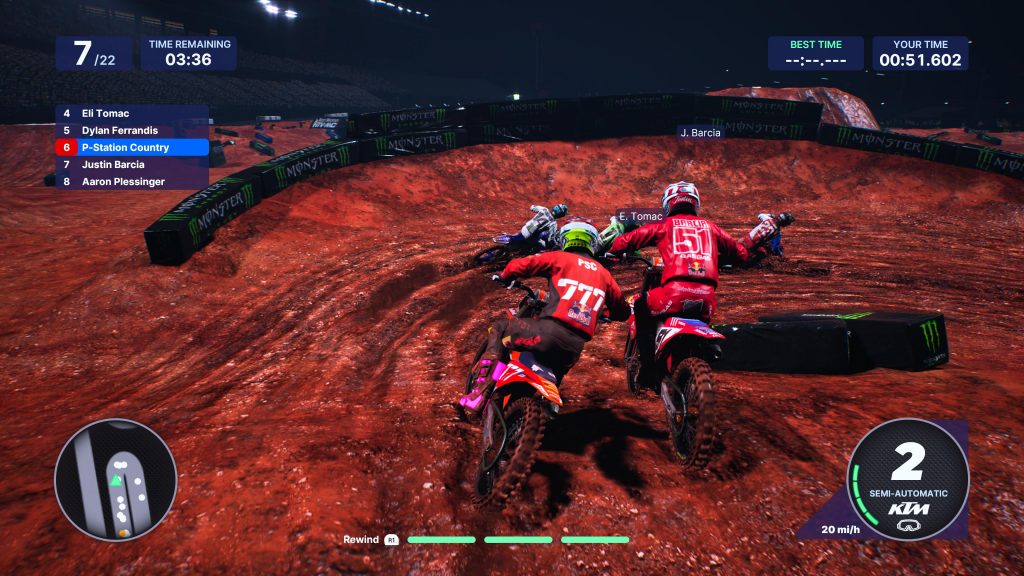 The other benefits of the PS5 are felt in the silky smooth frame rate and improved loading times (although we expect instant loading these days and this game doesn’t deliver on that at all, but they are a big step up from the risible loading times the series was known for last generation).  However, the big issue with the game is that these annual updates mean that there really isn’t enough time to put in any innovation.

Sure, you get the career mode which takes you through a 250cc and 450cc season as well as offering you training which lets you level up your rider but the series already had that, and to be fair all that does is make the early races feel unnecessarily stiff and awkward.  We’re not really sure that racing games need RPG-style stat leveling.  You can improve your rider’s shape by riding around an open world looking for letters (that spell out SHAPE) to collect but this is really just an unwanted distraction between races but is necessary thanks to the new injury system where specific injuries affect certain stats.  And then you get the usual online and track editor modes too.  It makes for a fairly complete package but it’s stuff we’ve seen before from the series. 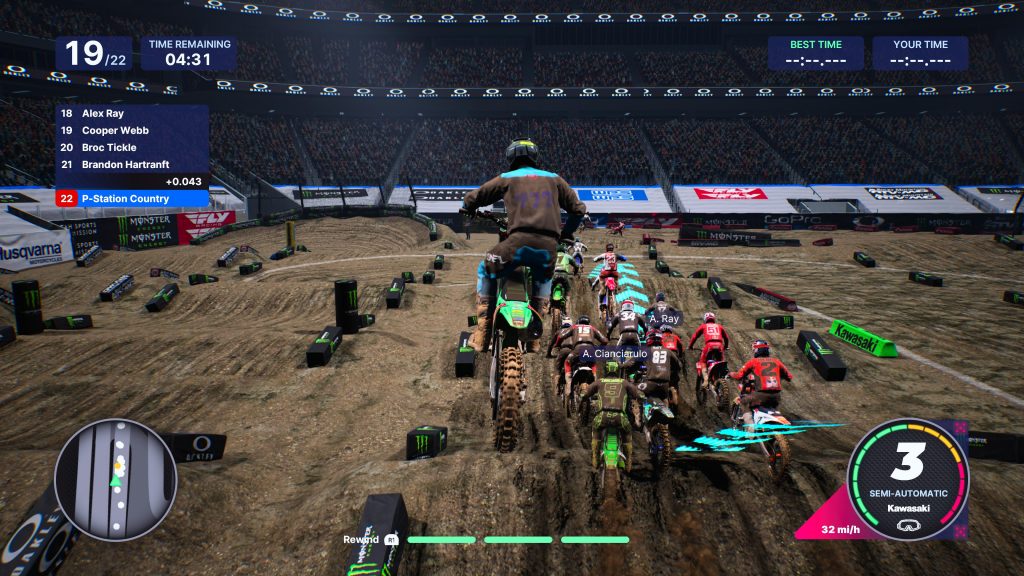 To be honest, it might be time for the series to take a year out and really work on innovating the series and pushing forward the presentation.  Sure, the graphics are quite good with some nice detail (such as your clothes flapping around as the air hits them) but it still looks like a PS4 game.  And while the engine noises are suitably growly (especially though a decent sound bar) we could live without the soundtrack which is full to bursting with mediocre American rock bands.

But with that all said, as with FIFA and Madden, this series has its fans who want the annually-updated teams and rosters and they’ll no doubt be happy to fork out the extra £59.99 but for anyone just looking for fun and dynamic motorbiking action, you’ll be better off picking up last year’s entry.  However, for what its worth, this is probably the best version of this sub-genre’s best series but putting in injuries and a slightly-improved track editor probably isn’t enough to justify the spend.

Monster Energy Supercross 5
7 Overall
Pros
+ A real feeling of being connected to the tracks
+ Plenty of races, gear and leveling up to get through
+ Very good use of haptics
Cons
- More of the same that we've seen year after year
- Presentation is okay but not amazing
Summary
If you want to get your supercross/motocross hit, then this game is the way to do it with its officially-licensed riders and tracks but it barely improves on last year's effort which itself was more of an evolution than a revolution.