At the outset you’ll be asked to pick a difficulty level: easy, normal or permadeath. We went with the middle option, though we’re not entirely sure why. Normal difficulty is no pushover at all you see. In hindsight we should probably have gone with easy for the purposes of this review. But eh, it’s fun to have a Ratalaika game that presents a solid challenge. Forget permadeath though, we died enough as it was on normal. 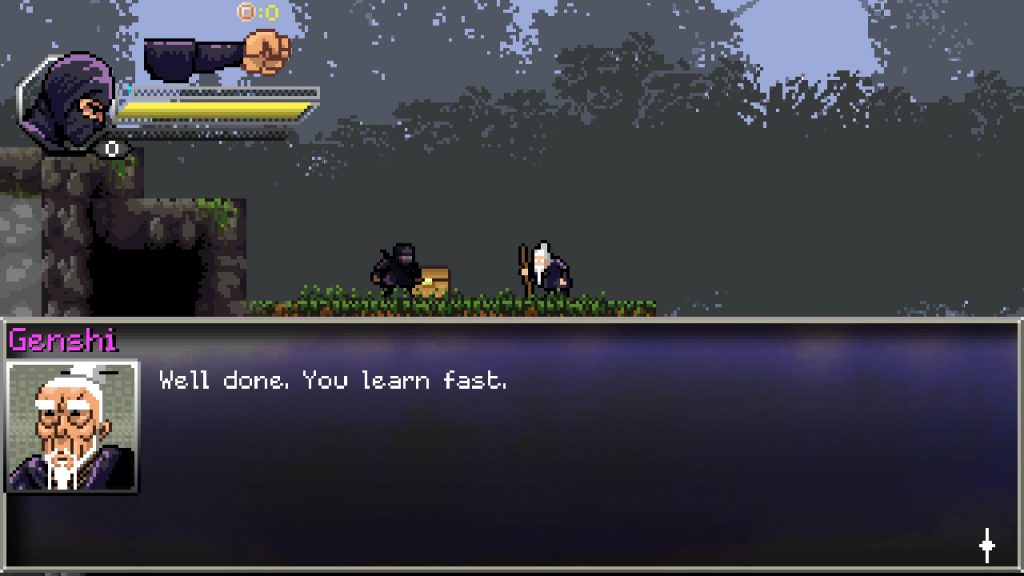 You see, Within the Blade is pretty unforgiving. That’s no bad thing, but we’d recommend you play through the tutorial first. Not to mention the fact that you’ll unlock multiple trophies as you do so, it’s a handy way to get a handle on the occasionally idiosyncratic traversal on display as well as various combat mechanics.

Pixel Shinobi, it turns out, is a fair descriptor of what’s on offer here. Across twenty five levels, you’ll uncover the mystery behind the rival Steel Claw clan. The plot, such as it is, doesn’t really amount to a great deal. It won’t win any awards for originality, nor will you particularly be able to recall it once you’re done. 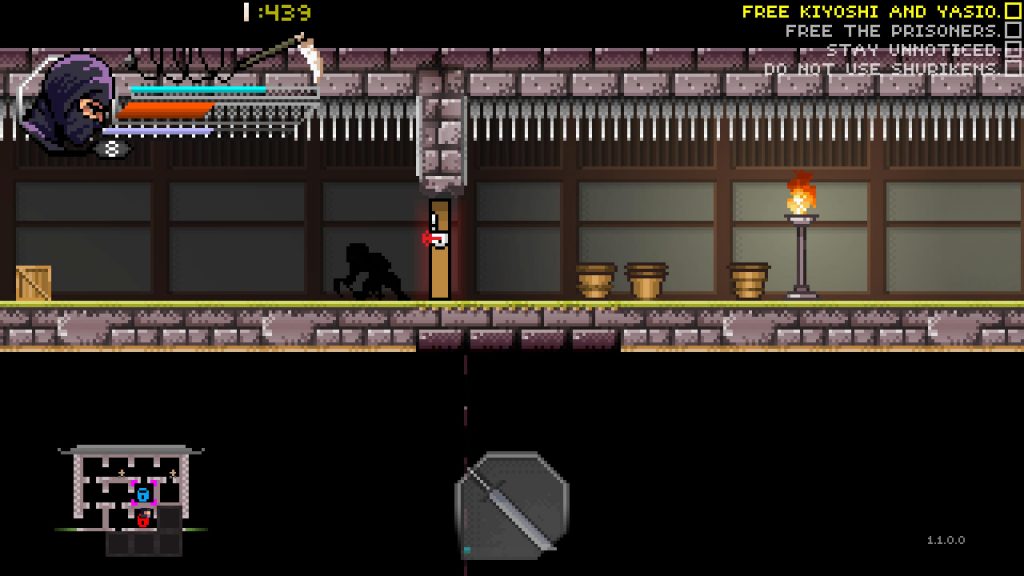 What soon follows is a series of levels where you face off against the Steel Claw clan, initially just against low level thugs. You’ll end up battling bosses periodically, the first being a dickhole that likes throwing bombs at you. We eventually managed to beat him in the best Dark Souls style fashion by somehow managing to coerce him to blow himself up. We’re not sure the devs particularly had this in mind, but it was pleasing enough given how many times we’d already succumbed to him.

Every so often you’ll return to your home village to meet with your sensei whp’s also the source of upgrades to your abilities. Though only if you’ve finished missions with sufficient aplomb, such as remaining unseen or meeting sub-objectives as you play. The biggest barrier to entry to be honest, is the fact that the UI is a bit of a mess all told. You can switch between items such as bombs, mines and shuriken for example, but nowhere are you told what the items are outside vendor screens. 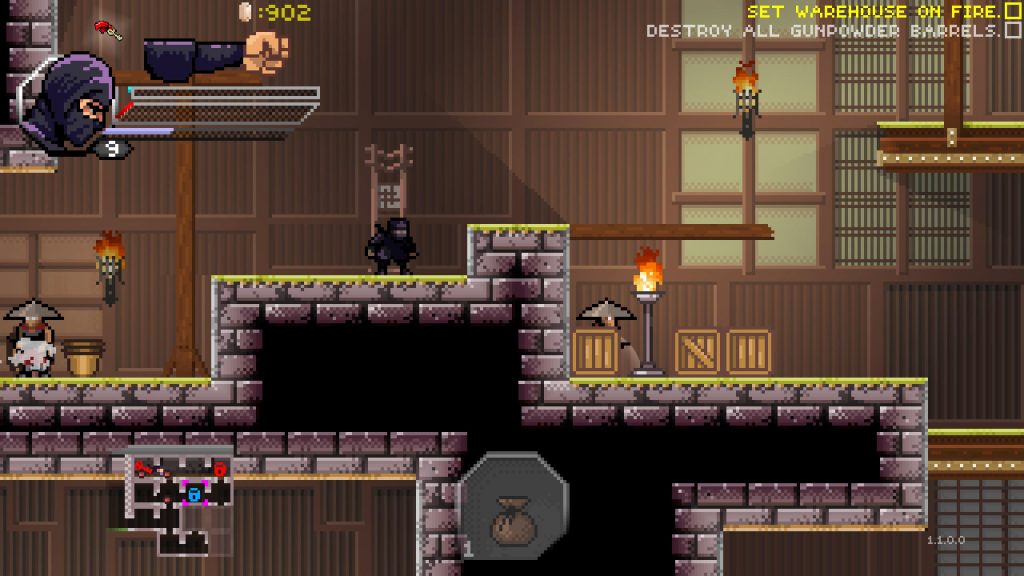 You can de-equip items in your hub, just as you can craft replacement items by using items you’ll pick up during missions. This ties in to your ability to hoover up money from levels as you play, as you won’t be able to afford crafting recipes otherwise. Annoyingly, we failed altogether to get a recipe for a very handy health potion we encountered once via a pickup. This led to another problem.

Sometimes we’d find ourselves hitting a mid level checkpoint with a sliver of health remaining, making what followed a gauntlet of sorts when we attempted the same group of enemies over and over. One particularly egregious example was mission critical enemy we had to defeat, one attack from him being enough for us to die and need to try again. And again. And again. Eventually we cheesed it by dropping poison landmines in his path. 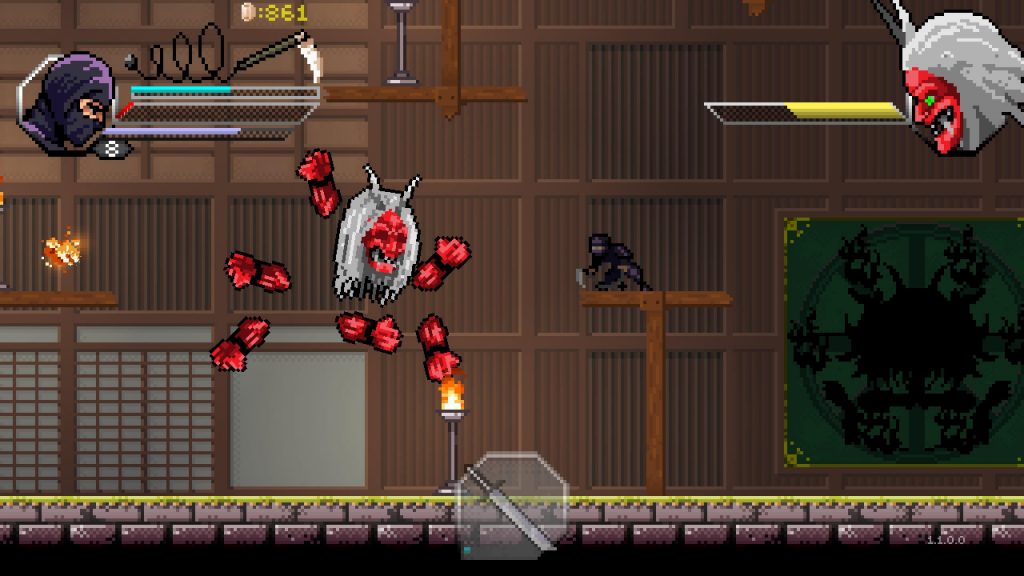 Ah landmines. Landmines are annoying inasmuch as they can kill you too, even if you’ve just laid one yourself. The best was on a pain in the arse boss that we battled and battled. Resorting to a mine as a desperate measure, we somehow managed to beat him despite it. Then we walked over it, having literally just beat him. The checkpoint had him alive. We may have sworn.

Weapons all have durability that wears down after a while. You can pick up replacements that drop from enemies, but annoyingly you don’t get any stats or a tooltip to show the weapon attributes. For example we had one sword with a glorious blood red icon, but we had no idea as to whether it had any particular special effect. You can also craft new weapons, or if you’re really in a bind, pay for them. 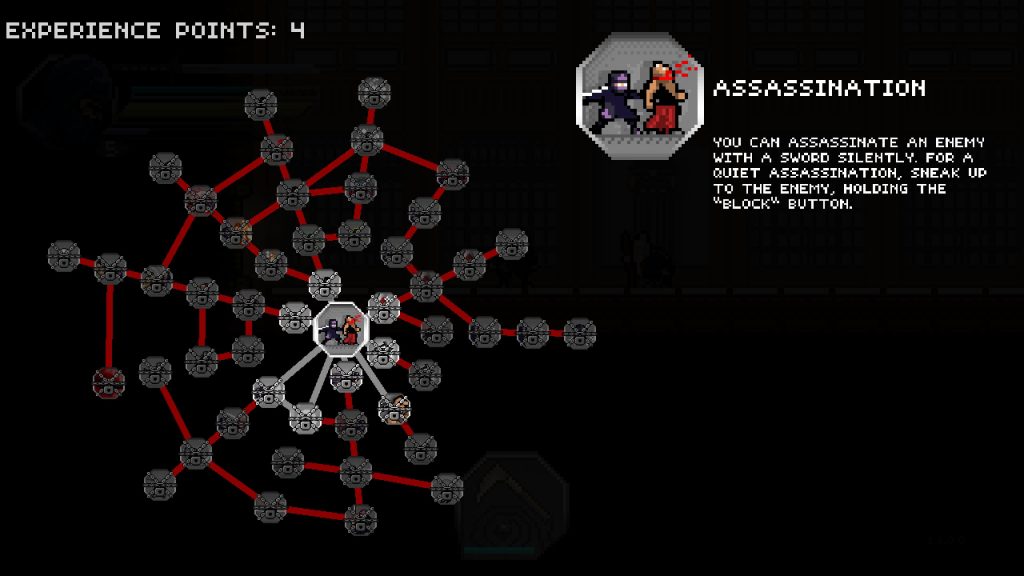 Combat is generally very satisfying, with a definite focus on stealth and one hit kills. We’re big fans of assassinations, decapitations are also a favourite. There’s scope for nuance and blocking here, but generally we found slashing away just as effective. When it came to bosses, evading their attacks and jump attacking seemed to do the trick. Though one late boss that we’ve as yet not beaten, seems to be immune to all but a slashing uppercut thing. Annoyingly you only get one hit before you have to run away ’cause his attack will take off half your health bar in one go, even if you’ve put skill points into extra HP.

In conclusion, Within The Blade is that rare Ratalaika game with an actual challenge and trophies that don’t yield so quickly as our most recent platinum from them (Super Destronaut DX-2 in 32 minutes total). It’s a bit of a rough diamond with a few frustrating rough edges that stop us rating it any higher.

Within the Blade
7 Overall
Pros
+ Combat is great and very visceral
+ An actual challenge, especially if you choose Normal difficulty
+ You have to actually play through all the missions to get yourself a platinum
+ Tutorial is genuinely useful

Cons
- Crafting is fiddly and blueprints are hard to come by
- No tool tips outside vendor sales screens. Want to know stats on weapons? Not here.
- Some bosses are cheaper than a clearance sale at Poundland
- Getting killed by your own ordnance is shit
Summary
Within the Blade is a great indie ninja game with a few rough edges. Just a few minor tweaks could elevate it, as it is in its current state it's a scrappy but likeable game.