7 months on I’ve finally had a chance to get a Playstation 5. Naturally, this opens me up for some reviews and I’ve had my eye on Chivalry 2 for the past month. Torn Banner Studio’s medieval multiplayer combat has been confined to PC, until recently. With console versions out, it’s a chance to see how the deep, satisfying madness translates to a controller and new hardware. 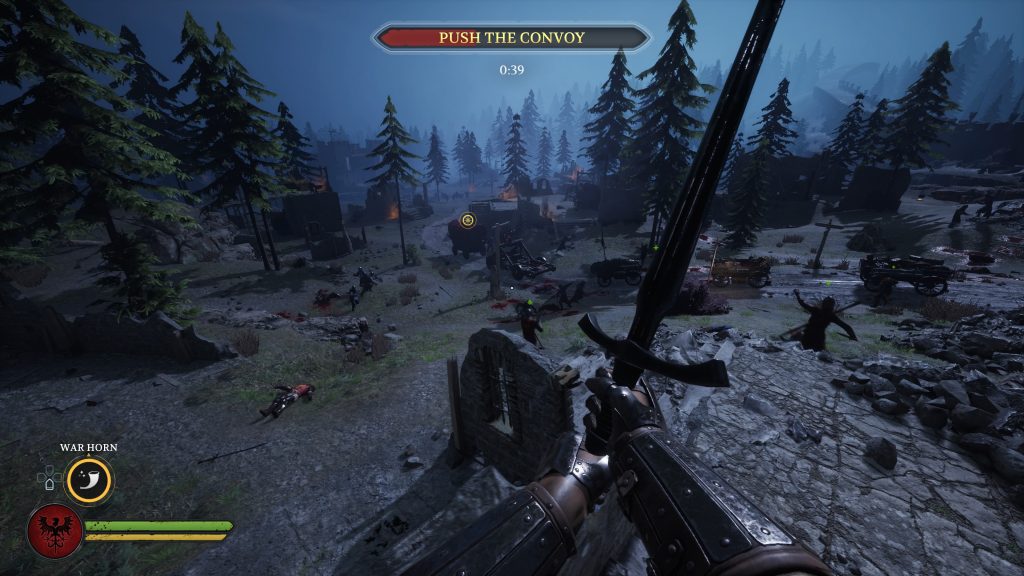 Combat in Chivalry 2 is very deliberate. You have horizontal and vertical strikes that all feel weighty and satisfying to connect with. They all have wind-ups and risky to charge up. Heavy strikes take longer to deliver and you can block incoming fire relatively easy. Positioning matters and as you look to break an opponent’s guard.

Defensive options are primarily your block which can be held as long as you have the stamina to do so. You have a dodge to get around an enemy’s guard and also have a jump to get over battlefield obstacles. Regaining stamina is a simple as standing still or hanging back but it does expose you. These all combine to make a tactical and chaotic experience. I’ve spent most of my time playing as melee classes. They can charge and tackle enemies and have specials that are either more powerful attacks or can come equipped with fire pots. Archers do handle themselves better at range but can be a little flimsy up close. They’re best suited to the ramparts and reigning fire from on high. 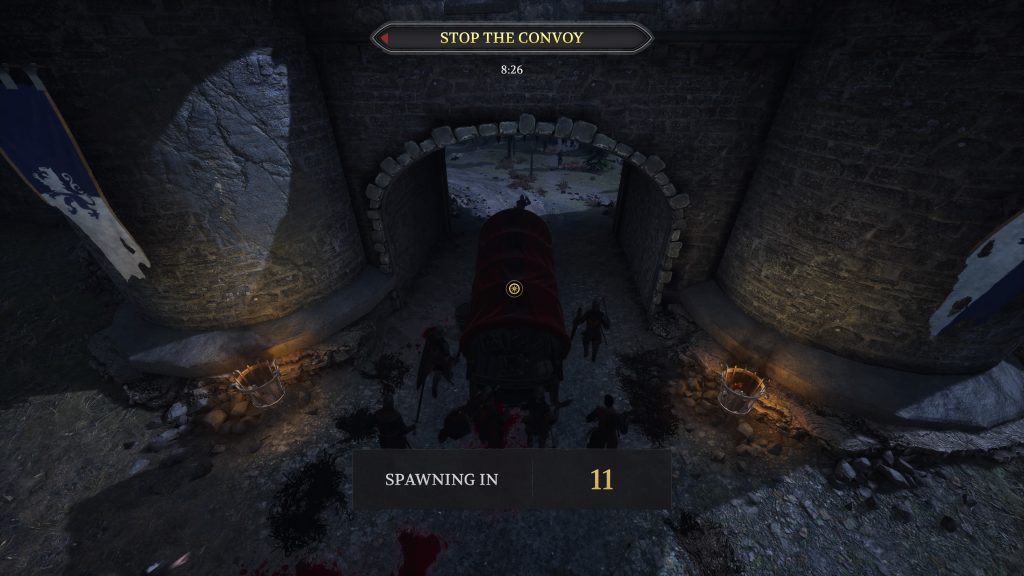 There’s plenty to engage with. The bread and butter combat takes up most of your attention but there’s points to control, battering rams to defend and plenty of moving parts to fiddle with. Catapults and trebuchets offer a chance for melee classes to launch trouble from a distance.

The battles mostly take part over some large maps. The landscapes are beautiful and varied as you move from Coliseums and castles to vast forests. Matches take usually 15-20 minutes and are objective based between two teams. Dozens of players are involved so the scale of the battlefield works well in Chivarly 2‘s favour. Despite the numbers, the objectives keep the crowd from being too strung out. Keeping everyone together really helps ensure the action feels constant and frenzied. It’s fun, violent and action-packed.

Unfortunately. It does make one-on-one fights harder to come by. I’m almost always engaging with crowds and fighting comes with a lot of collateral damage. Friendly fire is always a danger or being swarmed by enemy combatants. It can be exhilarating to hold your ground but moments like that feel rare. When you do find yourself in a duel, feints and movement feel a lot more crucial. In groups, I find a forward poke is my best hope to hit an enemy with minimal collateral damage. Not that you’re waiting long for the next life. 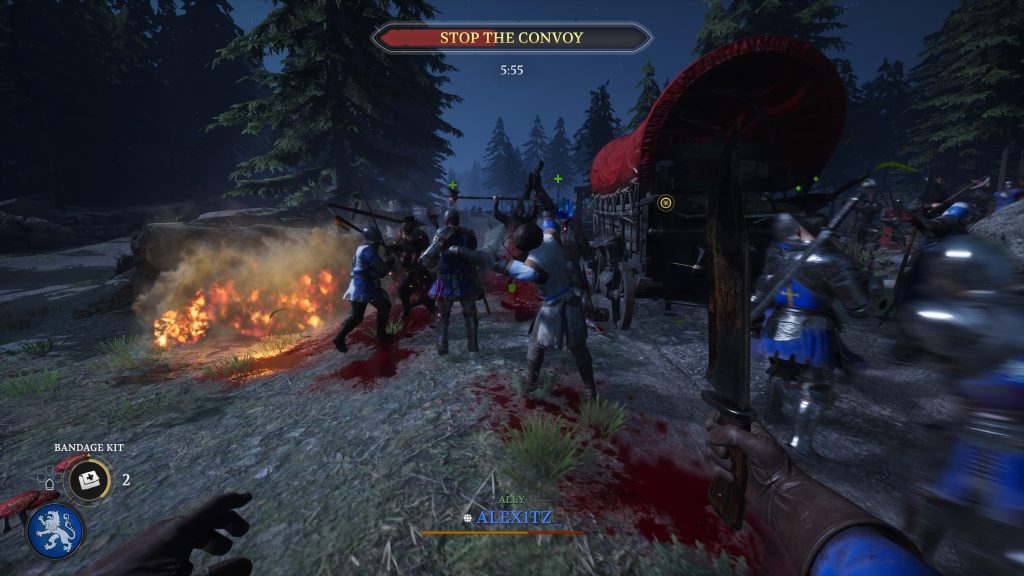 It feels a little like trench warfare with both sides trying to gain ground. The sides tend to be evenly split but I’ve had a a fair share of stalemates and blowouts. It’s unpredictable but entertaining all the way. Servers all feel stable and moving from one match to another is smooth. Player numbers are quite high which is bolstered by cross play. I’ve never waited longer than 30 seconds for a match to start. Once you’re on a server, the fights just keep coming until you decide to disconnect. It’s nice and fluid and, much like the action, there’s a great sense of momentum to it.

You gain experience and gold for every match you complete and this can be cashed in for cosmetic rewards. It’s nice to have something to fight for and it does mean veterans are there on skill and time spent. It definitely feels more inviting than the first impression gives off and these rewards do look nice. Seeing an opponent in some golden armour makes you really want to take them down.

Presentation is really well done. The start of each match is preluded with a rousing speech to really get you in the mood. You spawn in a full sprint and someone is always screaming. It’s incredibly charming and gives itself just the right amount of seriousness. There is some lore to set the conflict up but I’ve been fine to dismiss it. It does help contextualise these skirmishes, for those that want it. 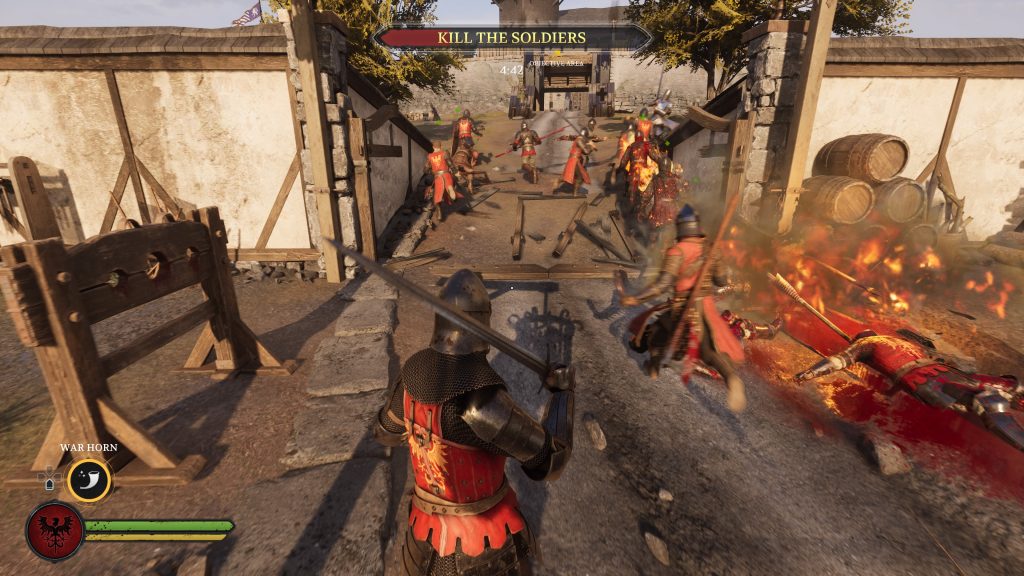 It’s a polished experience with visuals that look detailed and performs smoothly. I’ve not seen any tell-tale server hitches or unusual movement from other players. If there’s lag, it’s not significant enough for me to notice. Even seeing other players spawn in from thin air is oddly swift. Haptic feedback is used occasionally when you’re on the move or pulling back your bow.  Adaptive triggers show some resistance when your stamina is drained. I don’t think sound does much special but it’s nice to hear arrows swish by you and your comrades exertions in full voice.

It all comes together well. The combat has a depth that takes a little time to master but is fascinating to engage with. It’s fun, visceral and you’re never more than seconds away from your next clash of swords. The objectives give you something else to focus on and, whilst there’s too many people on a server to truly coordinate, it keeps up the pace and still feels charming to me.

Chivalry
8 Overall
Pros
+ Deliberate, satisfying melee combat.
+ Presented really well with strong visuals.
+ Servers perform very smoothly.
+ Addictive and surprisingly accessible.
Cons
- It can be hard to actively coordinate with other players
- Cosmetic rewards quickly feel like a grind to unlock.
- I've seen the occasional match lopsided in terms of player count.
- Those wanting class customisation will be disappointed.
Summary
Chivalry 2 takes some cues to make the sword and shield combat feel a touch more accessible. I feel it's for the better with a fairly decent tutorial leading you right into the fighting. Whilst it can feel daunting, I've seen myself contributing to battles very quickly. The combat is deep with an importance on positioning and timing. It is slightly undermined by trying to keep the players together but, even if duels are harder to come by, the chaos of a full battlefield is hard to ignore.  It's fascinating, fun and fluid.