Urban Trial Tricky is a 2.5D motorcycle-based Trials-esque game from Polish dev crew Tate Multimedia.  That is to say that while the action all takes place on a 2D plane, the visuals are polygonal and as for the Trials comparison, this game is more focused on stunts than shaving off seconds from speed runs on the level.  There is a little bit of that too though, with time trial levels dotted in.

After a quick tutorial, the game throws you into the main action.  There’s no plot to speak of, so all you need to know is that you’re a motorbike rider and each level of the game is essentially a large bucket shape with a large ramp on each side and then a number of smaller ramps, jumps, loops and obstacles to navigate and use for scoring opportunities. 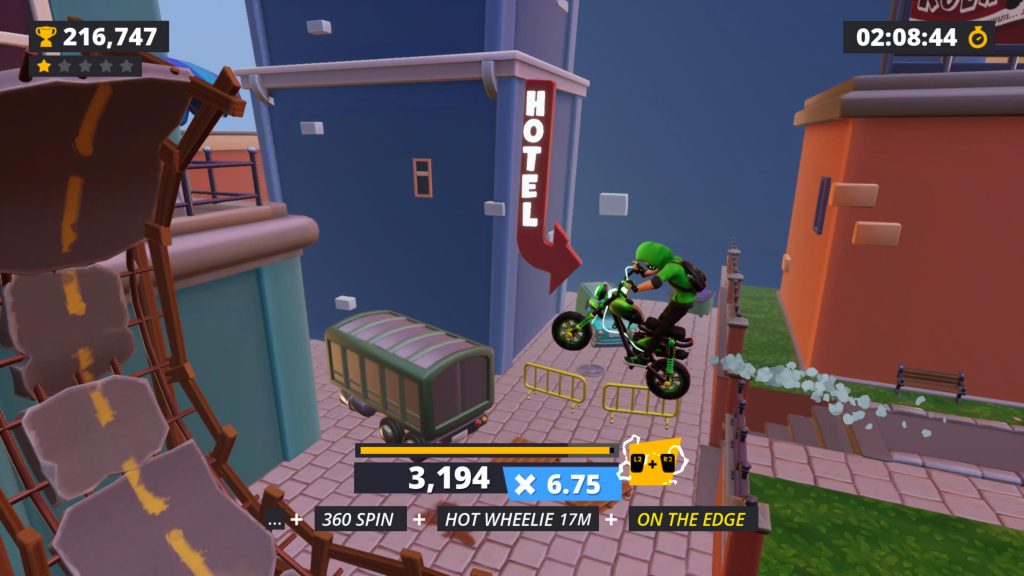 Most of the game’s levels task you with reaching high score targets.  You do this by chaining together wheelies (and stoppies) with air tricks such as spins, flips and specialised tricks such as the Superman as well as outlandish ones that you’d never see in real life.  Each trick scores points but the main thing you’ll want to do is keep the combo going as that’s your multiplier.  If you crash, you’ll keep the trick points you earned but you’ll lose the multiplier.

The controls are relatively straightforward with

controlling braking and acceleration, the left stick handling balance (for wheelies and flips),

for your tricks.  Your fingers will be doing their best octopus impression at times but we never felt like our many crashes came from the controls.  Instead they were more due to some of the tricky level layouts.  Much like Tony Hawk or SKATE, a big simple ramp is your friend and fiddly ramps with obstacles will be harder to flow through. 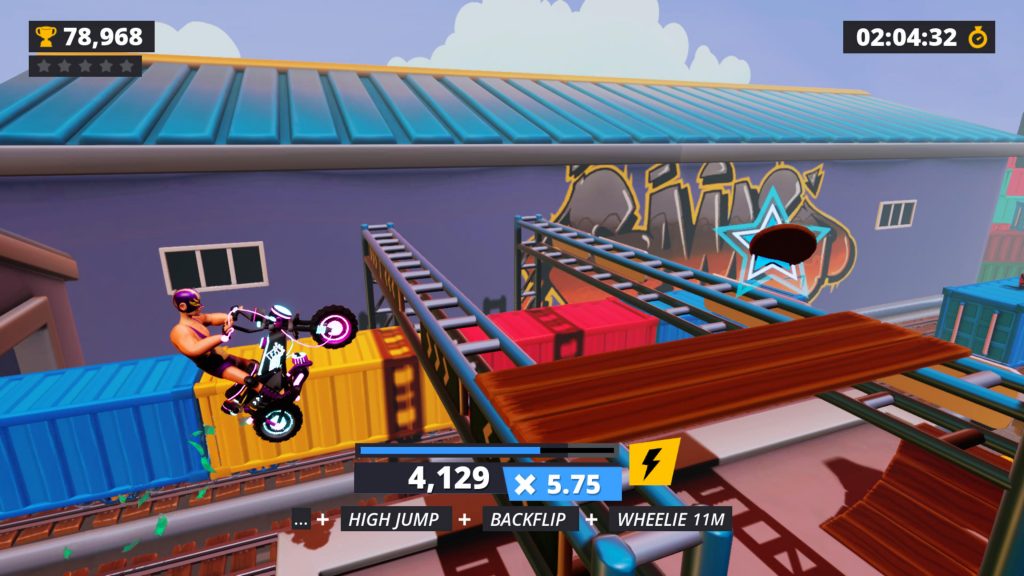 Scoring will unlock stars, up to five, on each level and these stars have two functions.  They’ll unlock further levels (so you may need to replay earlier ones a few times if you’re a bit short) and also new bikes and customisations.  You’ll find that bikes are pretty important because you’ll find that some levels are nearly impossible to get five stars on (especially the time trial levels).  Later bikes offer you more speed which also translates to more air time and therefore more time to score big with tricks.

On the plus side, this gives you a lot of reason to replay levels, but it can feel a little grindy.  Replaying to beat your own scores is cool, but replaying to grind stars to get the bike that will let you get more stars feels like gated progress.  That said, it’s not too bad.  If anything though, the main barrier to progress is the game’s level of difficulty.  While I’m definitely no Trials expert, I’ve always done well with stunt based games.  Frantically cramming stunts into airtime is my thing but the score targets this game sets can be pretty tough and while I was able to make good progress, there is an issue.  The game’s child-friendly presentation is completely at odds with the difficulty.

Take, for example, the customisations.  These are all very silly.  You can dress your rider up as a wrestler, banana, unicorn etc but you can just put them in a set of leathers of your colour choice.  Or even just jeans and a t-shirt.  Everything feels like fancy dress.  Great for kids but they’ll soon turn the game off when they realise they need to chain together 15 stunts to reach the 1.5 million score target on a level.  The difficulty caters to a completely different audience when compared to who the presentation is aimed at. 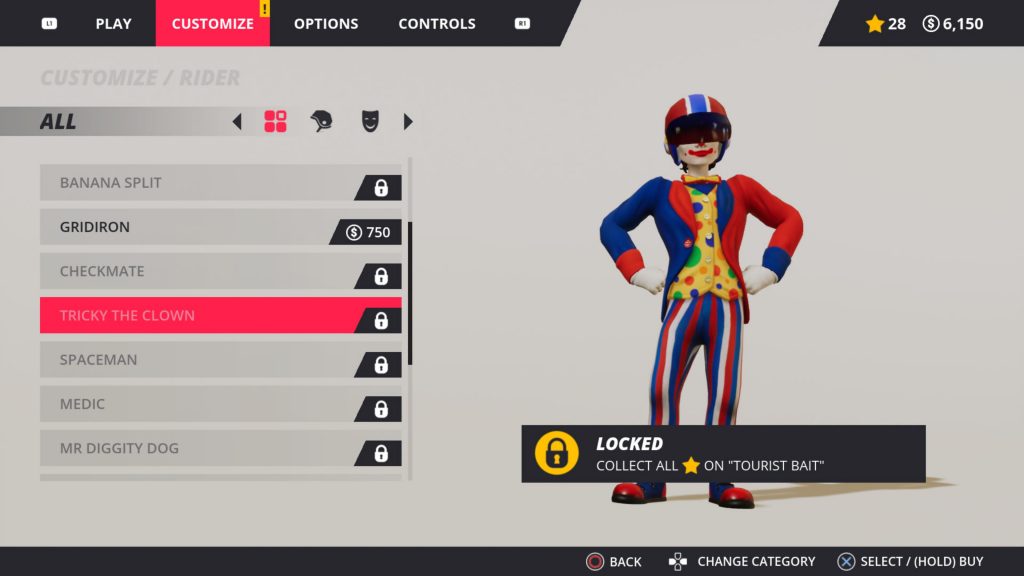 However, fans of the genre will find plenty to like here.  The short, skill-based levels and tough challenges can add a real addictive quality to the game and we found ourselves repeatedly going back to earlier levels to take out some of the highest score targets.  Also, this is one of those games where failure can feel devastating (when you cock up a massive combo) but where the mistake mostly feels like your fault.  That’s always a recipe for angry addictiveness!

After a while though, it does start to get a bit repetitive.  The game doesn’t offer up any new experiences as you go along apart from introducing you to harder tricks and fiddlier level layouts that are less and less friendly for high scoring and before long you’ll feel like you’ve seen everything the game has to offer.  That said, when you’re reviewing a game like this, you’re cramming in the hours trying to see enough so that you can give an opinion whereas normal people will just dip in and out of the game over weeks and months, which is much more sensible. 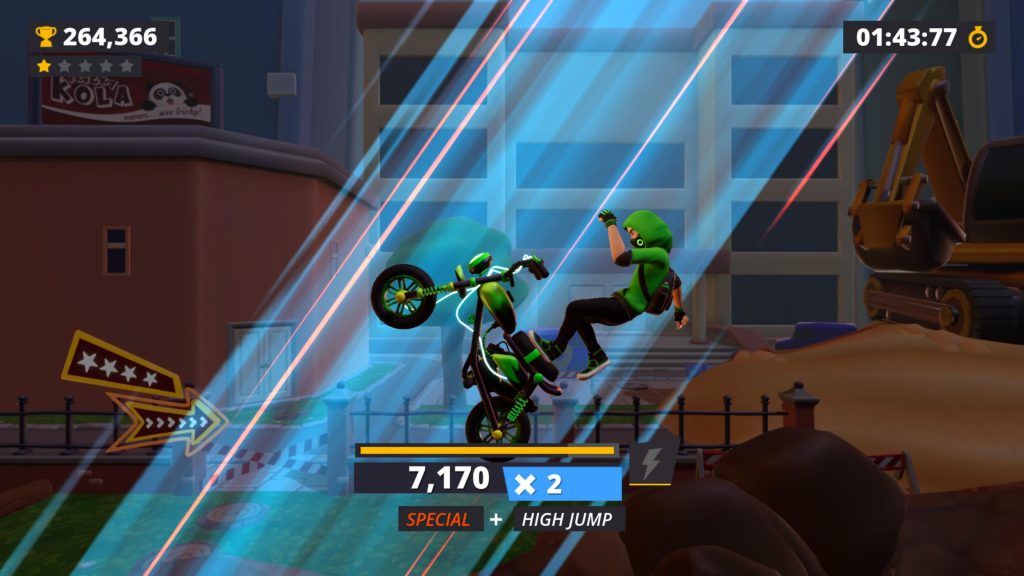 In terms of the presentation, the child-friendly visuals do add a bright and colourful charm to the game.  The ‘Urban’ in Urban Trial Tricky, means that everything is covered in bold, gaudy graffiti but the brightness of the game means there are no issues with visibility (although we’d have liked the option to zoom out the camera a little).  The animation is good though and everything ran smoothly during review (although we’re playing it on the PS5).  The 2.5D viewpoint is good too, giving the game a more professional feel than if it was strict 2D.  In terms of audio you get, as you’d expect, loud and raspy engine noises but you also get your rider shouting out inane comments which may or may not get on your nerves after a while.

So, overall this is a pretty decent game.  It’s fast, fun and (mostly) the right type of frustrating.  The price, £15.99, feels a tad high but we can see Urban Trial Tricky showing up in PSN sales in the future and if you can get it for under a tenner, we can’t imagine too many people being dissatisfied with it.  That said, it’s a shame that there’s no multiplayer fun to be had here (either on or offline).  But if you’re a stunt junky looking for some fun, challenging gameplay and you’ve got a few quid in your PSN account, you can do a lot worse than this.

Urban Trial Tricky
7 Overall
Pros
+ Solid, stunt-based gameplay
+ Smooth action
+ Quite addictive
+ Good level of challenge
Cons
- Presentation is at odds with the gameplay
- No multiplayer
- Is a bit repetitive
- Customisation options aren't great
Summary
Urban Trial Tricky is a decent motorcycle based, stunt heavy Trials clone and it can be a lot of fun. The child-friendly presentation is definitely at odds with the level of skill you'll need to make good progress though.