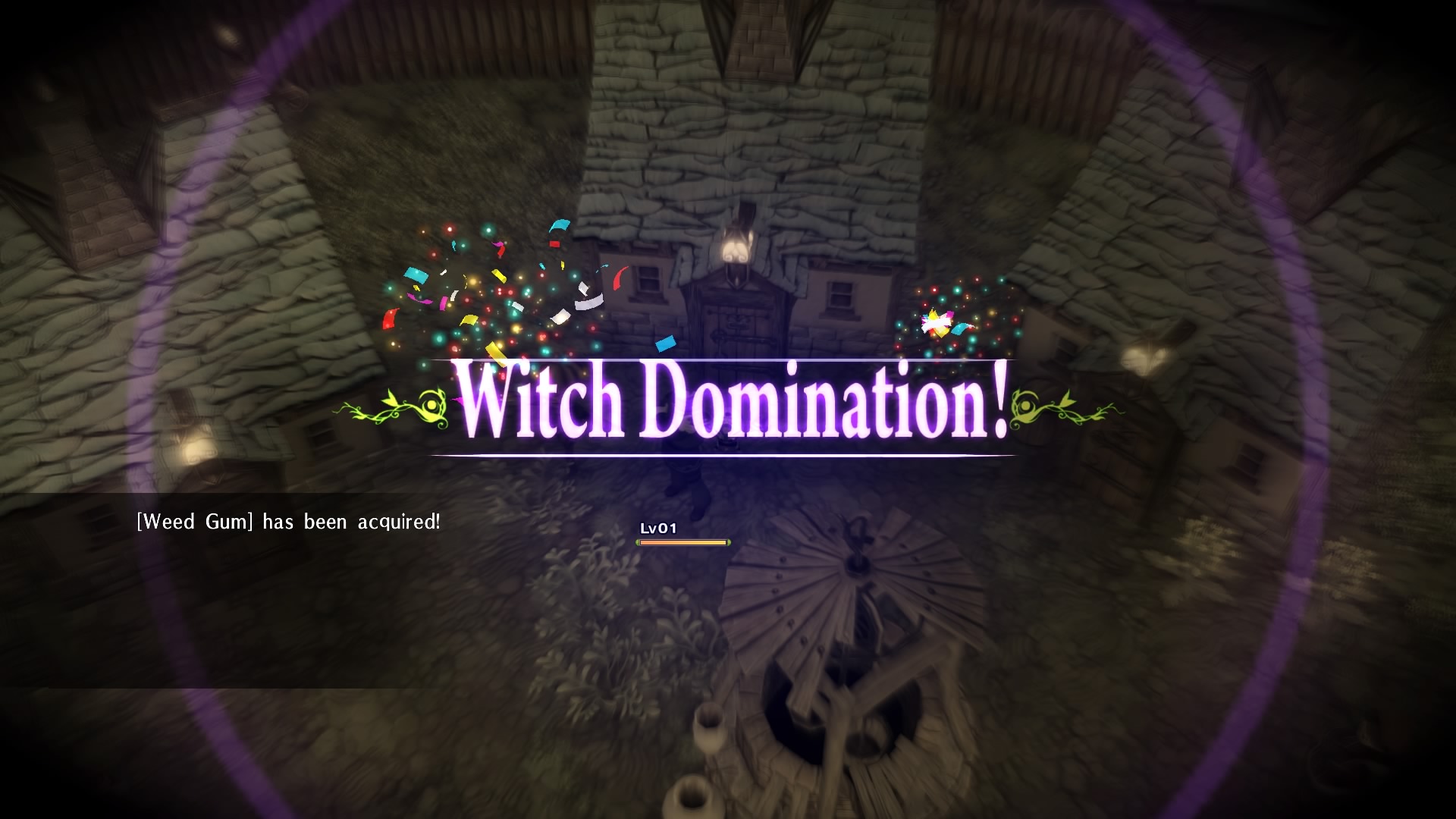 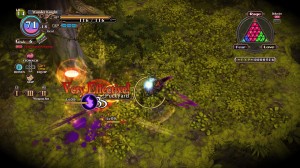 The Witch and the Hundred Knight: Revival Edition is an enhanced port of the PS3 game of similar name. I never played the original release so can’t directly compare the two but, being a fan of Disgaea, an action RPG from Nippon Ichi Software seems like a treat, or was I tricked?

The basic story follows you, the Hundred Knight, after being summoned by Metallia the self proclaimed ‘Great Swamp Witch’. She orders you to spread the swamp further, giving her more power and notoriety and most importantly, help her defeat her rival the Forest Witch Malia. As with most Nippon Ichi games the main story is rather basic but does go off on tangents now and then and it’s the quirky characters you’ll enjoy rather than the journey they go on.

Although there is an obvious similarity to Nippon Ichi fans, Metallia is actually rather different than most of their usual characters and of JRPGs and all other games in general in that she is actually a terrible person. Not someone who’s supposed to be bad but actually does good but complains about it, not an anti hero but a nasty piece of work. At the basic level that means she swears like a sailor (mostly bleeped, but not all words for some reason) but beyond that she’ll happily kick an already beaten foe when they’re down, kidnap someone in need or use her magic to give someone a fate worse than death (there is a scene with rats that I don’t want to spoil but it’s pretty messed up). It makes a nice change, though you’re not necessarily going to like her.

Most other characters will be familiar though, you will probably even recognise the voice actors during story sequences from Disgaea. It’s to the usual high standard if you don’t mind anime style voice work and there is a Japanese option if you’d prefer it. As JRPG players are probably used to these days conversations are portrayed with still portraits of the characters with minor pose changes and sound effects representing actions. The 2D artwork is very nice as you’d expect from Nippon Ichi with a variety of varied character designs.

The 3D in game graphics on the other hand don’t do the 2D artwork justice. You can obviously tell who is who but the models and stiff animations lose a lot of the charm from the original designs. Similarly the environments lack detail and so come across as a little bland though there are a variety of locales in the game which is a plus. Any areas with objects above the character though, such as trees, are a pain as they don’t become transparent and just block your view of the action requiring you to adjust the camera constantly.

Gameplay-wise the easiest point of comparison for The Witch and the Hundred Knight is actually Diablo. No where near as good mind, but the position of the camera and the walking around an area to fill out a map, killing enemies and finding loot is a very similar gameplay loop. Each level is it’s own separate instance which you travel to through a world map. On these maps you encounter enemies which you take down with simple square, square, square combos though you can lock on, block and dodge (a well timed dodge slowing time) to add a little nuance. Each attack of a combo needs a different weapon so you can equip a maximum of five to have a five hit combo string.

Weapons vary from swords to hammers, staves to axes and they do three different damage types. Slash, Blunt and Magic damage will have different impacts on different enemies so using the right weapon at the right time will make things go far smoother. You can have three different weapon sets at a time which you can cycle between with L2/R2 on the fly allowing you to always be using the best weapon for the job. Weapons have stats so you’ll be changing out old weapons quite frequently in order to maximise your damage, but another crinkle in the gameplay is that each weapon has a die next to it from one to five, and if you equip the weapons in order then you’ll gain bonus damage through the combo. 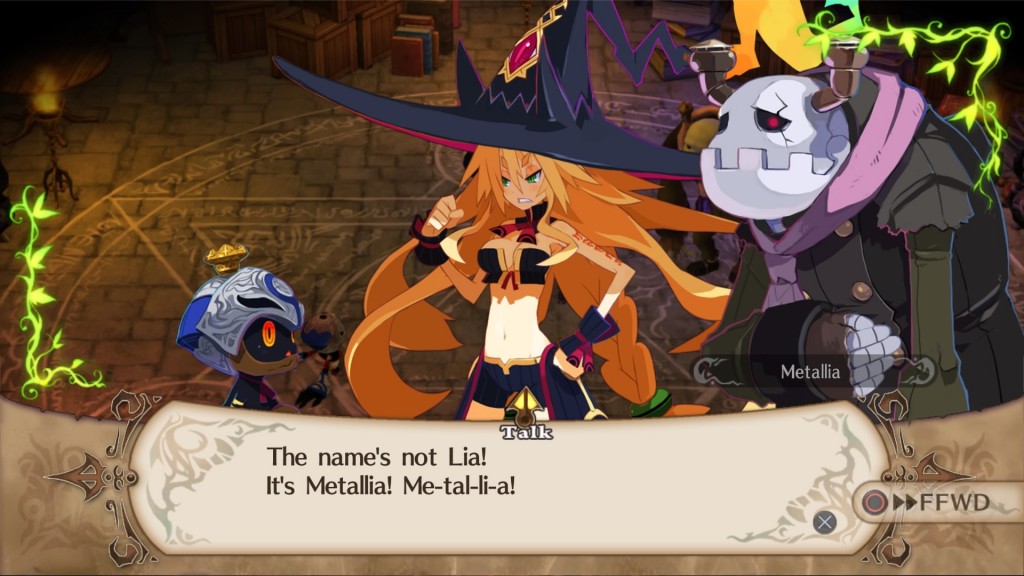 So as you can see despite being quite simple there are always little extras that make things a little more interesting and far more complicated. As with earlier Disgaea games things are poorly explained as well with quite a lengthy tutorial early on teaching you to use the left stick to move your character and other super basic stuff and then little to actually satisfactorily explain the more complex mechanics. You can power through it and thanks to the original game being out for a couple of years can find guidance online but some in game help would have been nice.

The biggest crinkle to the formula is the G-Cal system. Short for Giga Calories, G-Cal symbolises Hundred Knight’s energy in the field, not your life, nor stamina, but just a number that ticks down as you explore dungeons. If you take a hit your life will regenerate but that costs G-Cal, there is a stamina mechanic which limits your actions to stop you sprinting around and attacking like a mad man, that costs G-Cal to replenish. Just standing still? Your G-Cal will still decrease. It starts at one hundred and if it hits zero you’ll be weaker and your life will decrease until you get more G-Cal or die, which will warp you back to the hub world.

You can use items to replenish G-Cal, spend temporary (up)Grade Points and also eat weakened monsters, although this fills your stomach which is where any items you pick up in the field go temporarily so will limit you in that respect. It’s an odd system that I’m not sure adds anything to the gameplay. More often than not if I was running low I’d leave a dungeon, check my equipment, save the game whilst I was there, then re-enter and I’d be at one hundred again and continue exploring. The negative to this is, as with Disgaea, the more combos you perform the better bonus you get when you leave the dungeon so cutting that short will mean less rewards. You can also spend the Grade Points I mentioned earlier to upgrade Hundred Knight’s stats but only as long as you stay in the dungeon, leaving will reset the upgrades so this may be another reason for you not to leave prematurely and using items to keep your G-Cal topped up.

Most dungeons are relatively straight forward, usually your destination is marked with an exclamation point. Completely exploring a map 100% can be a little more tricky or even impossible until you’ve acquired more skills (‘Tochkas’), whether they’re using teleports or placing bombs to blow up obstacles. Bosses are, again, not completely straight forward as they have incredibly high defence apart from when they are attacking, which is represented by a fluctuating bar under their health at which point you can put decent damage on them but risk getting hit.

Beyond the regular dungeons is the Tower of Illusion which I believe is new for the PS4 version. If you’ve seen Disgaea‘s Item World then you’ll understand this as you sacrifice a weapon to the tower, the strength of which determines the strength of the enemies inside. The tower provides you with upgrade materials which you can use to strengthen weapons up to a certain point allowing even more development for those interested. 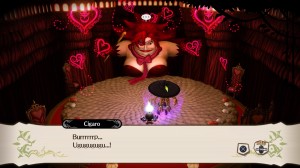 That took quite some explaining and that’s The Witch and the Hundred Knight in a nutshell really. It’s kind of basic and to counter this rather than develop those fundamentals simply more has been added on top. You can’t polish a turd and this isn’t a turd by any means, but the core game is overly simplistic, thus repetitive and adding multiple complex features on top of it doesn’t change that. It’s not terrible by any means and getting a good string of weapons together can feel rewarding and the loot aspect, although a little stingy, does keep you moving on to new areas. If you’re a fan of Nippon Ichi games and are in the market for a Diablo-esque game, knowing that it’s not up to that standard then you’ll probably get some enjoyment over the generous running time of this game. If the idea of something so simple it gets repetitive, yet complicated that it’s difficult to fully grasp is a turn off then you should probably steer clear.

The Witch and the Hundred Knight: Revival Edition
6 Overall
Pros
+ A lot of different mechanics add some depth + 2D art is up to Nippon Ichi's usual standard
Cons
- Repetitive exploration - Overly complicated elements not explained well - 3D visuals aren't anything special
Summary
There are moments of fun in The Witch and the Hundred Knight: Revival Edition but unfortunately the amount of repetition over the generous running time turns to tedium. There are lots of different mechanics to learn but the basics aren't overly fun and the loot system will keep you moving forward but there are better games of this type out there.