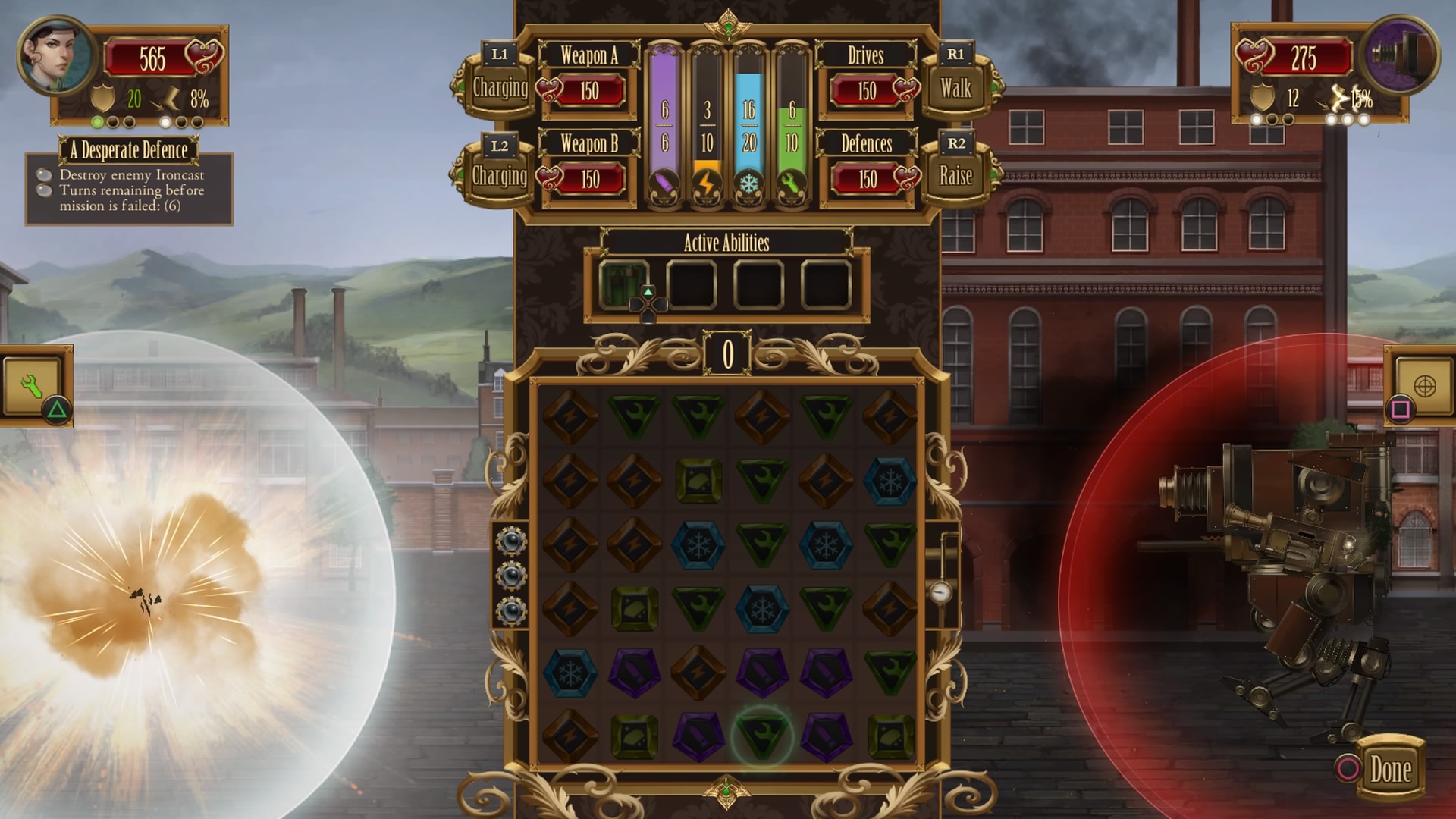 Originally hitting the PC in March 2015, Ironcast arrives on the PS4 to take Dreadbit’s interesting blend of genres to home consoles. Can a roguelike match-three really gel or will this patriotic Mech game run out of momentum?

At its core, Ironcast is a turn-based strategy game with permadeath and puzzle elements. There’s very little window dressing besides a text-based story about a Victorian Britain being under the siege of French invasion. Stakes are high and it wastes little time getting you into the trench and inside the cockpit of a Mech. A well-executed tutorial explains the majority of the game’s mechanics in a concise manner. 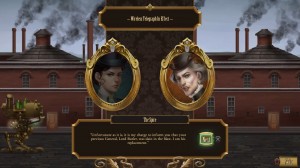 Effectively, you face off against an opposing tank and take turns to eliminate one another. Each turn grants you three shots at the board which is where you match nodes to gather resources. You then spend these to operate weapon and defense systems. There’s a lot to keep track of and your early battles will teach you that this game is all about compromise. With three opportunities to match you can’t gather everything so prioritising the essentials is the key to success. Victory rewards you with experience, money and war assets which you can then spend back at base to repair or enhance your hardware. Again, there’s a lot to manage and only so much to spend so you’re taught to compromise and focus.

Its complexity is initially surprising and heartening. There is depth but, as with any roguelike and match-three, you are sometimes undone by lady luck. Death is permanent so defeat means a return to square one. It will come often so they key to any game of this type is to ensure the player learns and at least feels like each failure pushes them closer to success. Unfortunately, it doesn’t quite manage that. Maybe I’m not good enough but there’s too many random elements at stake for me to feel like victories are earned. Your first fight is always a simple icebreaker but, beyond that you’re in for tough scraps that can go south suddenly. The board might not give up the nodes you want which leave your systems exposed or crucial attacks will miss. For a game with such obvious substance, it frustrates me more than it educates. 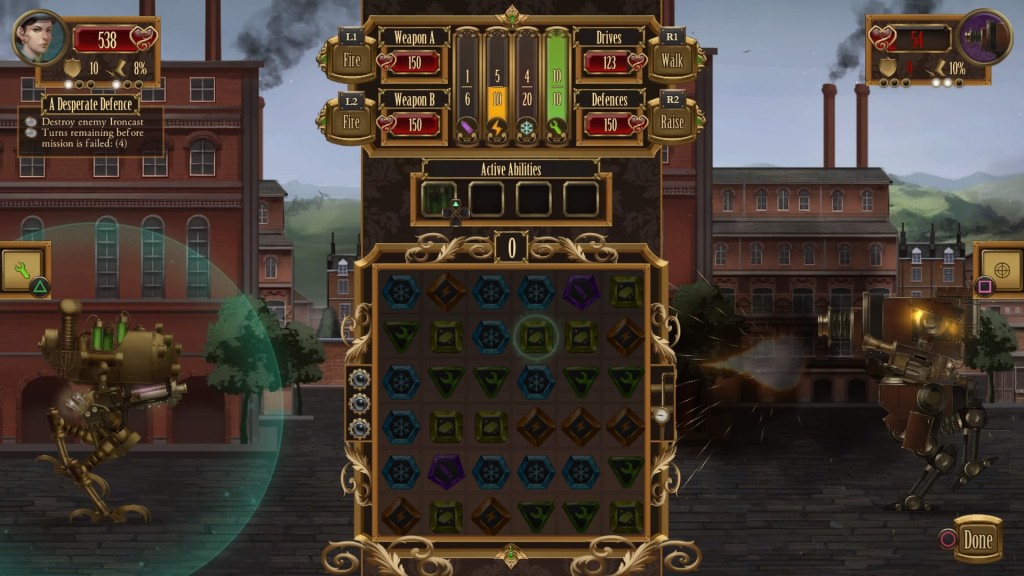 To date, my best run of this game lasted forty five minutes. That felt like the foothold I’d need to improve at this game but, since then, I’ve barely hit twenty. I know bad runs are meant to be common but I get a clear sense of regression from this game, despite not really doing anything different to my best run and I’m getting less enthused to dive back in for one last shot. I’ve had a run die on the first enemy because the board wouldn’t offer me the ammo needed to hit one last shot on the enemy, for example. Its a game of hard swings. Be wary. If critical reception of the PC release is any barometer, it appears it resonates with some more than others so consider this a tough one to gather a clear consensus on. 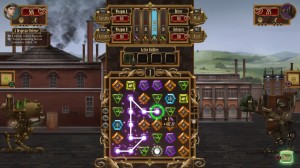 On a more positive note, the Victorian aesthetic is nicely re-enforced with some top steampunk mech designs and character portraits. The game has very little fat and moves you on from encounter to encounter with some urgency. There are attempts at varying the gameplay up with different mission types. Some task you with surviving an onslaught, targeting specific systems to prevent your enemy’s escape or avoiding a system altogether so you can salvage it. On top of that, the game offers persistent awards so those struggling could perhaps grind towards that, if they have the patience. Its a game which tries to do an awful lot with a small budget and, whilst I don’t feel it succeeds, I can applaud it.

In truth, it feels like Ironcast barely gets going with its sharp difficulty curve and punishing dice rolls. Its barebones approach to presentation and light options portray the game’s kickstarter origins. Beneath that hood is a mixture that would compel me more if death felt like a learning experience. Its strategic and unique but I feel like this will appeal to a specific crowd. Just be warned that its favoured genre tropes can undermine it and frustrate. If you’re that sort of person, it holds some value for you. For everyone else, there are other more enjoyable options.

Ironcast
5 Overall
Pros
+ An interesting mix of genres. + Nice steampunk aesthetic. + Immense challenge for those that want it.
Cons
- Barebones presentation and options. - Difficult to gain that all important foothold. - Requires far too much patience, luck and grind.
Summary
Despite the need for strategy and potential challenge, I can't get into this. There's a lot of luck, patience and persistence that goes into a successful run and, for every good one, there's plenty of abject failures. The setting and premise is a nice combination but the game's chosen genres don't seem to melt into something cohesive. You sputter through this game and I don't feel it does enough out of the gate to keep you wanting one more run.
We use cookies on our website to give you the most relevant experience by remembering your preferences and repeat visits. By clicking “Accept”, you consent to the use of ALL the cookies.
Cookie settingsACCEPTREJECT
Manage consent