Wings of Bluestar is a horizontally-scrolling shoot ’em up from prolific publishers EastAsiaSoft who’ve put together quite the stable of games from this genre.  Now, most of these have been quite unusual with games like Red Death and Project Starship but, on the face of it at least, Wings of Bluestar is a bit more traditional.

You get to pick from two pilots, each having a different ship with different capabilities, as they battle through eight stages in an effort to liberate their planet from a rogue AI.  It’s pretty standard stuff but Bluestar has plenty of fresh ideas too. 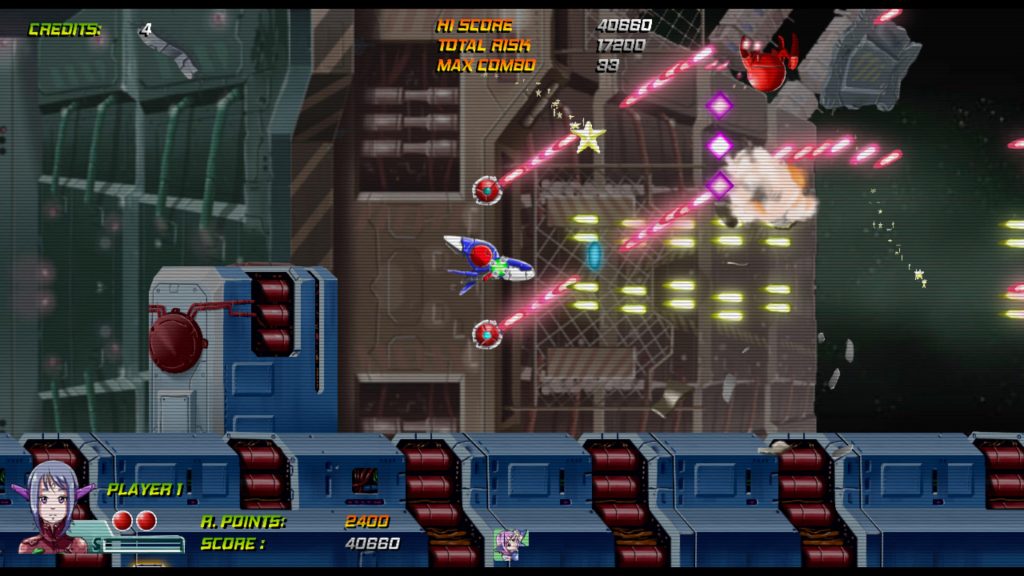 The game plays out like any game from this sub-genre.  If you’re familiar with the likes of R-Type or Gradius, you’ll likely be comfortable with this one.  However, every shoot ’em up has its own weapon upgrade system and that’s definitely the case here.

You can pick up three types of power up.  One of them levels up your primary gun’s firepower, another gives you a shield (if playing as the female pilot) but the interest thing is the ‘add-on’ power-up.  This gives your ship a drone that fires along with you.  You can also pick up a second one (the first going above your ship and the second going below).

These add-ons can then be rotated.  Zarak’s ones are rotated using the trigger buttons and fan out, mirroring each other.  Aya’s are a bit more interesting as they stay parallel when rotating them and can be rotated with the right analog stick.  We love twin-stick controls on traditional shooters, so this is great for us. 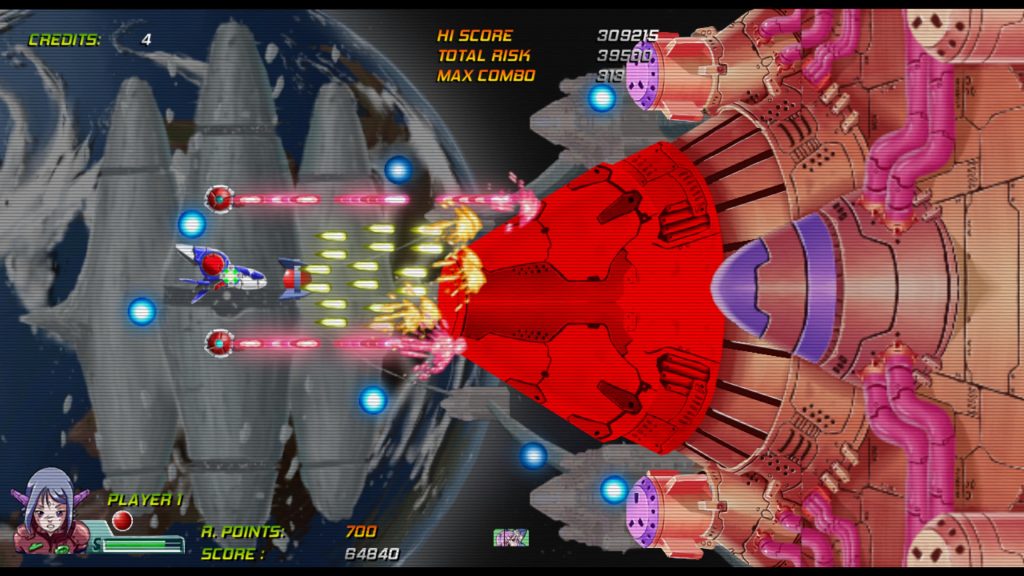 Beyond that there’s not much else to know about Bluestar‘s core mechanics apart from that you can pick up little picture pieces for bonus points and ‘risk stars’ which are used to unlock items in a sub-menu out of the game.  That’s a cool concept but the things you unlock aren’t that interesting (picture galleries, sound tests and the like) apart from the ability to buy an extra credit (that you use to continue the game if you lose all your lives).

Unfortunately, while we like the core mechanics (at least of Aya’s ship), the game does have some odd issues and poor design elements.  Story mode is where we started with the game.  This gives you the same stages as the game’s ‘Arcade’ mode but with some visual novel style plot exposition in between the levels.  Now aside from these going on longer than they need to, and for not being all that interesting, a lot of the art was re-used.  You’ll see a picture of Zarak waking up or Aya in a control room a lot.  Fans of standard anime art might enjoy for a bit but we didn’t and things got worse when the game wouldn’t let us pick our dialogue choices.  The options were there but we couldn’t move our selection with anything on the DualSense. 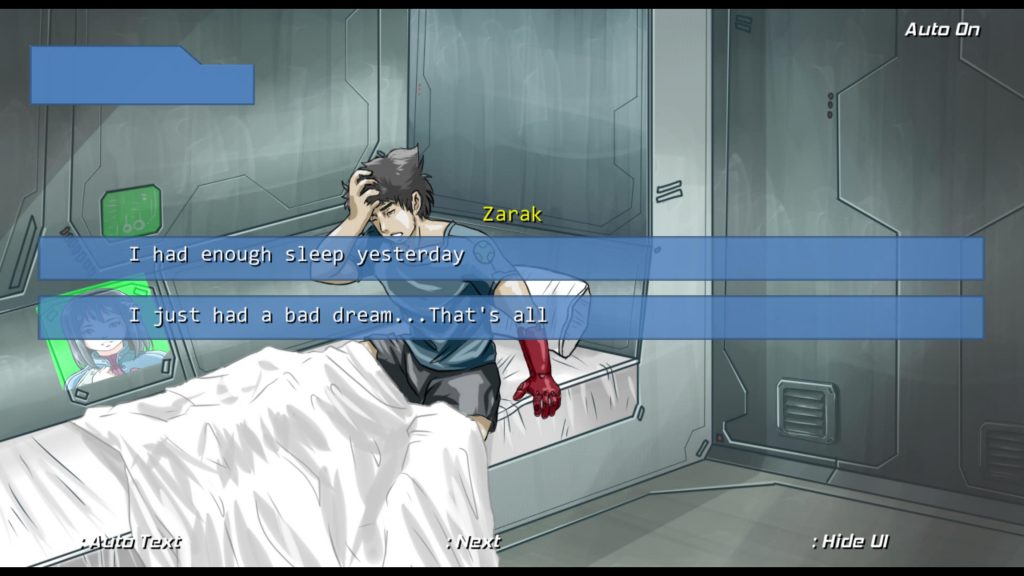 Also, at one point the dialogue froze up and we had to restart the game.  And that wasn’t the only bug we encountered in this mode.  The second time we fired up this mode, it slowed to an absolute crawl.  It felt like the game was at least three times slower.  And it stayed that way until we had to quit again a few stages later.

Then there was a boss battle where the boss stopped taking damage.  It was a standard R-Type style robot snake where you had to damage each section.  We burned three credits and multiple restarts trying to kill it but it wouldn’t die.  So at that point we tried Arcade Mode and it died easily there.  Although we did get another permanent slowdown issue here too but it wasn’t as slow as before. 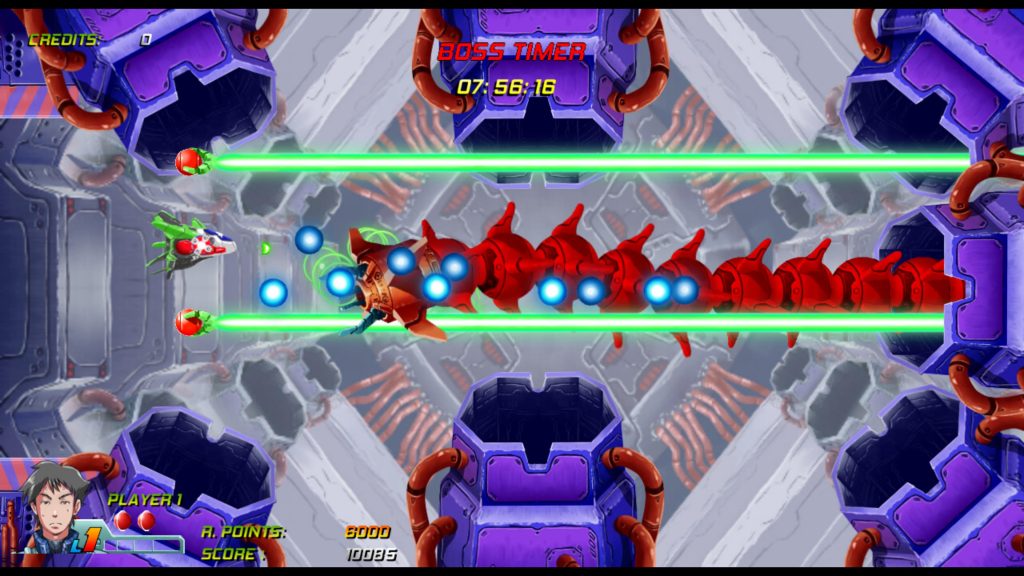 Clearly there are a few technical issues that are probably part of the porting process and therefore a result of poor playtesting.  So it’s hard to feel too positive about Wings of Bluestar even though we were able to complete the game eventually when all of the bugs stayed away long enough for us to do so.  We never completed Story Mode though.  And while we’re moaning we definitely had a couple of unexplainable instant deaths that were definitely not player errors.

The difficulty curve is a bit odd here also with bosses sometimes feeling as vulnerable as regular enemies on lower difficulties.  If you want to have any fun with the game, you’ll need to up the difficult setting to one of the higher ones.  If you do this, there’s plenty going on and the game actually becomes quite enjoyable but you may then find that the bosses put up a lot more resistance than before and act as quite big difficulty spikes.  The balance between fun and challenge still needs to be ironed out we think. 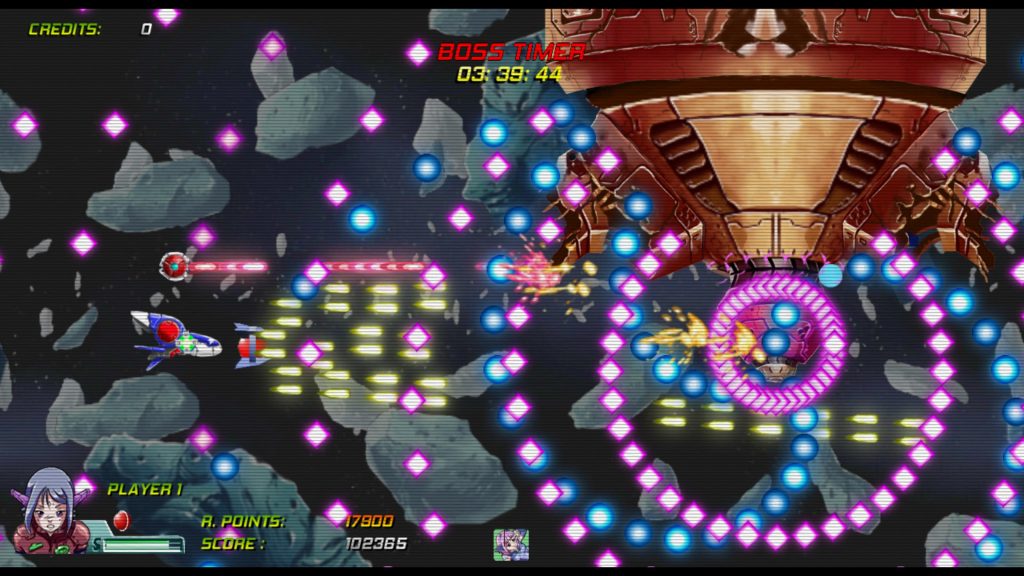 In terms of presentation, things aren’t great there either.  Aside from the repetitive visual novel aspects the in-game visuals are quite weak too.  The player and enemy sprites sometimes feel like they’ve been roughly cut and pasted on with poor anti-aliasing and a real flatness to them while the backdrops are dull and uninspired.  Foreground objects that you can crash into are also not very well-defined compared to the backgrounds, so you’ll definitely have a couple of early accidents until you configure your awareness to deal with them.

We know this has been a bit of a laundry list of criticisms but if you catch a bug-free playthrough, completely ignore Story Mode, pick Aya and play on one of the harder difficulties, then Wings of Bluestar isn’t too bad.  When the action is flowing and you’re weaving through bullets, everything is reasonably enjoyable but there’s so much wrong with the game as it stands that it is hard to recommend to anyone unless you’re looking for a reasonably easy Platinum trophy (or two).  Or if you’ve got a thing about 19 year olds piloting space ships while wearing robotic elf ears for some reason.  Anime is weird.

Wings of Bluestar
5 Overall
Pros
+ Core mechanics are fun when they work
+ The focus on unlockable content is admirable
+ Arcade mode is good for people not fussed about story
Cons
- Technically buggy
- Story mode doesn't seem to work very well
- Controls aren't consistent
- Visually a bit weak
Summary
Wings of Bluestar is a horizontally-scrolling shoot 'em up with some good ideas but the execution is a little lacking.

One thought on “Wings of Bluestar – PS5 Review”