Breakers Collection is a compilation of two Neo Geo fighting games, namely Breakers from 1996 and its follow-up Breakers Revenge in 1998.  Excitingly, these games were never released outside of Japan so this is probably your first chance to get a hold of them (well, assuming you’ve not been dabbling with emulation for the last 20 years).

Assuming though that you wish to go legit and not down the naughty route, what do you get?  Well, really it’s just the two games but what you do get is decent emulation, some visual filters and, most importantly, some very solid online play (with the all-important rollback netcode functionality for smoother and fairer fights) and a few bonus features. 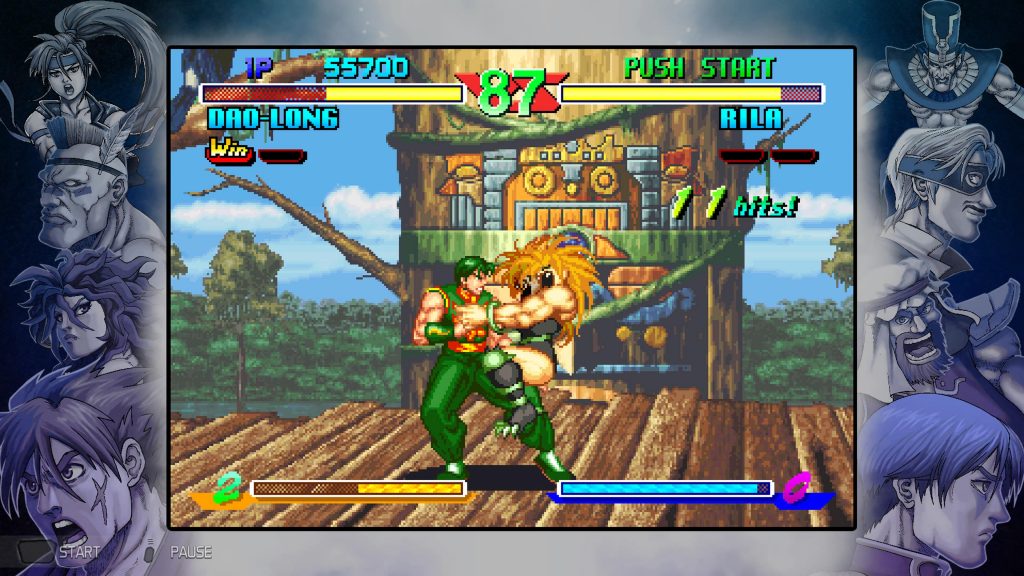 Like we said before, Breakers came out in 1996 but that’s not important.  What’s important is that it came out in a post-Street Fighter II world.  Once Capcom’s once-in-a-lifetime fighting sensation came out, the entire genre scrambled to catch up.  Sure, Mortal Kombat did its own thing, but everyone else wanted to tap into the winning formula and developer/publisher Visco Corporation took their shot at the champ.

And actually, Breakers was pretty good.  It offered a varied cast of fighters (albeit none as iconic as SF2 or MK) and global locations with each character having their own move sets complete with combos and special moves.  From traditional martial artist archetypes to SF2 character rip-offs (you’ll spot definite ‘tributes’ to Dhalsim, Vega, Chun Li and Blanka for example), it was clear that Breakers wasn’t looking to reinvent the wheel but rather attempt to refine it.

There’s a sense of weight to Breakers (albeit not quite up there with the excellent Garou: Mark of the Wolves) and the AI is very solid.  Enemies do seem to work out how to counter you pretty quickly and are good at negating repetitive attacks as well as button-mashed spazzing out.  That said, you will likely struggle later in the game when the AI fighters seem to develop Anderson Silva style reactions.  Also, the game does that thing of making the first fight in each best of three quite easy, with the AI fighter then taking you to school in the two following rounds. 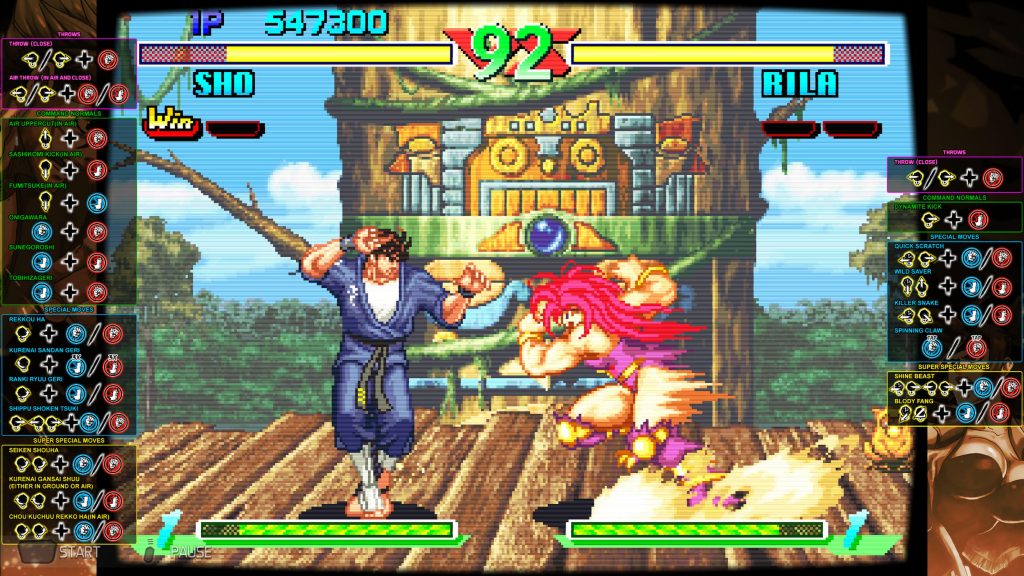 While the action feels very much a part of the post-Street Fighter II way of doing things, there’s a sort of acrobatic speed to it that gives it a little bit of a Mortal Kombat feel too.  Matches here can be careful and technical for sure but often favour more spectacular balls-out fighting styles.

In terms of how it plays, any reasonably seasoned fighting game player will feel at home with this game’s control set up.  It uses a four button system for attacks with light and heavy punches and kicks.  This works better on a DualSense than a SF2 six-button set up.  And you won’t be too surprised to see the famous quarter turn move being used as well as seeing the old ‘on fire’ sprite idea being directly taken from Capcom’s more famous game. 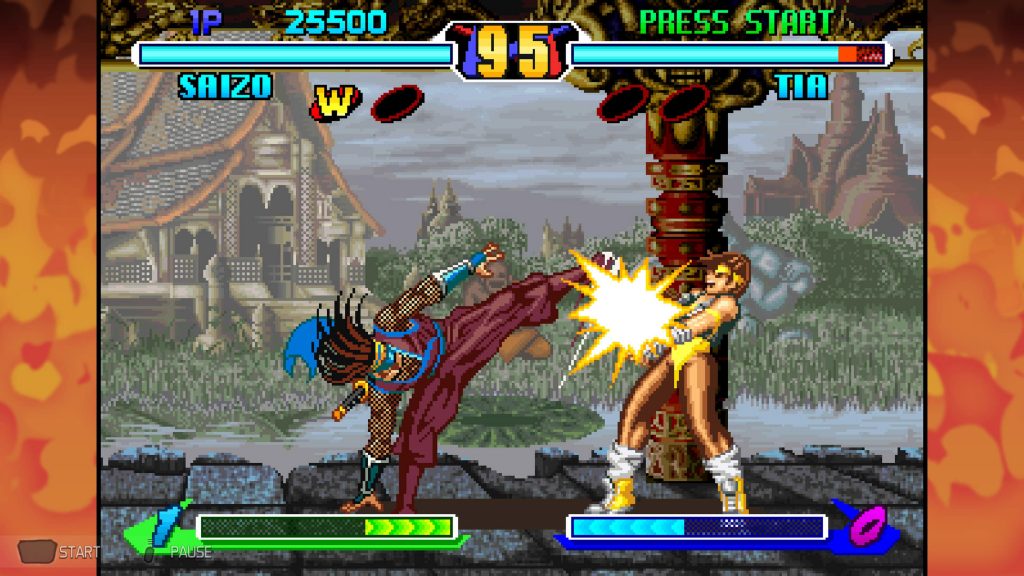 Breakers Revenge is more of a Championship Edition kind of update.  It keeps the original game’s eight characters and adds a new one and allows you to play as the boss.  It’s not massively different in terms of execution with the same visual style being kept and just a few noticeable tweaks to the AI.  However, it’s good that they included it just to round out the package.

While the emulation and netcode are on point, this package doesn’t bring a whole lot more to the table in terms of gameplay and presentation configuration.  You get a few visual options for screen scaling and filters (these just give you normal, smooth and scanlines) but there is no rewinding or quick-saving (which you’ll find quite frustrating when getting to the end of these games as the difficulty curve is pretty brutal even on the easiest setting). 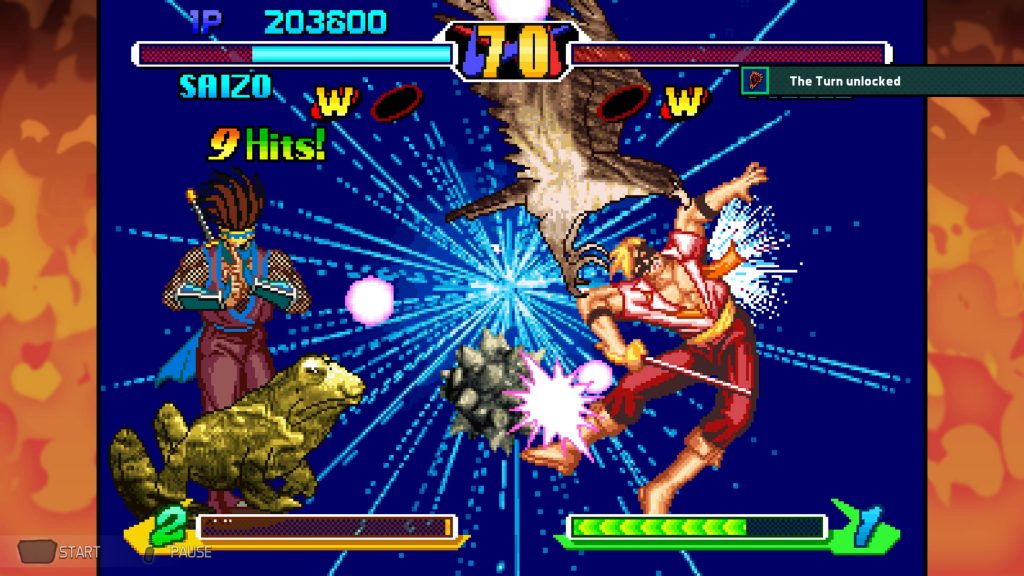 What we did like was that you can change the border/bezel and one of the options gives you the move list.  Displaying it on the edge of the playable area is a very cool option.  A day one patch now makes that work on the second game too (it didn’t before).  Also, a few controller issues seem to have gone now as well.

We live in a cool time in gaming where old, mostly-forgotten games like these can get their moment in the sun.  And along with the two included games, you get some bonus art, sound tests and a dev interview though so that’s fair enough.  In terms of longevity, we don’t expect the online servers to ever really get busy (although we’re very pleased to see online play included and done so well) but mastering the characters on offer should take you some time.   So while it might not be for everyone, fans of these games, and the genre in general, are lucky that they get to experience hidden gems like these.

Breakers Collection
7 Overall
Pros
+ Two great fighting games
+ Excellent netplay
+ Easy to get into but hard to master
Cons
- Late game difficulty can be a bit much
- Occasionally buggy controls
- Is a fairly bare-boned collection lacking in bonus materials
Summary
Breakers Collection offers up two excellent late '90s fighting games that never had a release outside of Japan and while both games offer up some great fighting action, they may be for hardcore fans only.