Wildcat Gun Machine is a twin-stick shooter and is the debut title from Australian coders Chunkybox Games.  The game uses an isometric viewpoint and cartoony art style (similar to Hades or Bastion) but has a direct, action-packed gameplay focus that honestly isn’t a million miles away from something like Doom.  Well, with a little imagination.

With no real plot to discuss, all you need to know is that you’re a sort of cat lady (a lady who is a cat, as opposed to a lady that has lots of cat) and you need to get through what appears to be a massive space station by collecting keys and killing enemies.  The game is split into ‘acts’ which consist of a series of linked rooms and end in a boss battle. 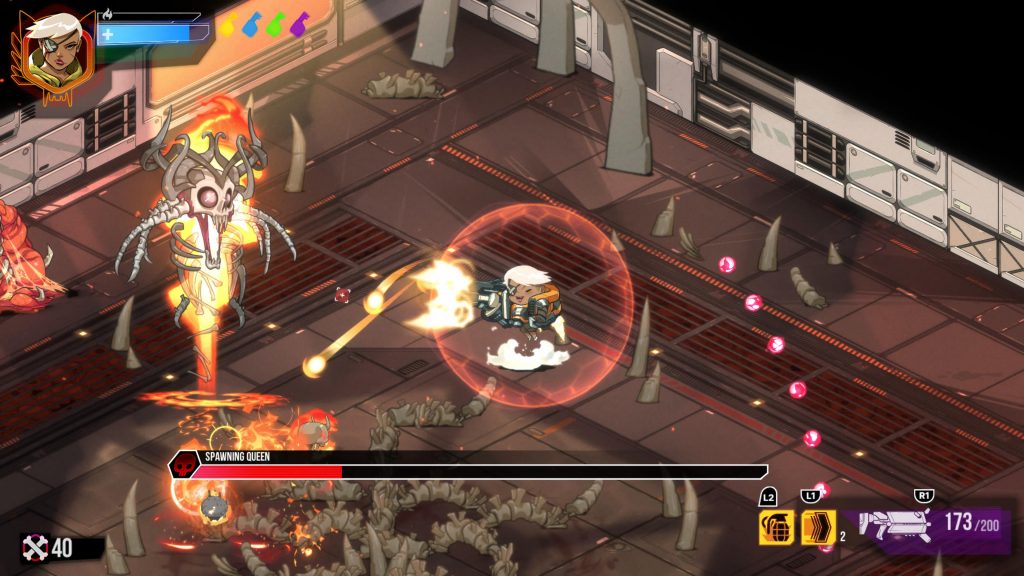 As a twin-stick shooter, you move with the left stick and aim with the right.  Unfortunately, there’s a shoot button (R2) which is something of a pet peeve as all you’ll do is hold that down so we’d rather that was automatic.  You start with a basic pistol with infinite ammo and this is your basic primary weapon but along the way you’ll find more powerful secondary weapons that do a lot more damage but have limited ammo.   You can switch between primary/secondary weapons with R1.  You’ll soon gain uses for the other trigger/shoulder buttons too when you unlock a handy dash move (L1) and grenades (L2).

The strange thing about Wildcat Gun Machine is that we’re so conditioned to these things being roguelikes, that it took us an embarrassingly long amount of time to realise that this game isn’t one.  Sure, you’ll find new (secondary) guns along the way and can buy new pistols at checkpoints, along with upgrades, but all that death costs you in this game is a little bit of in game currency and time. 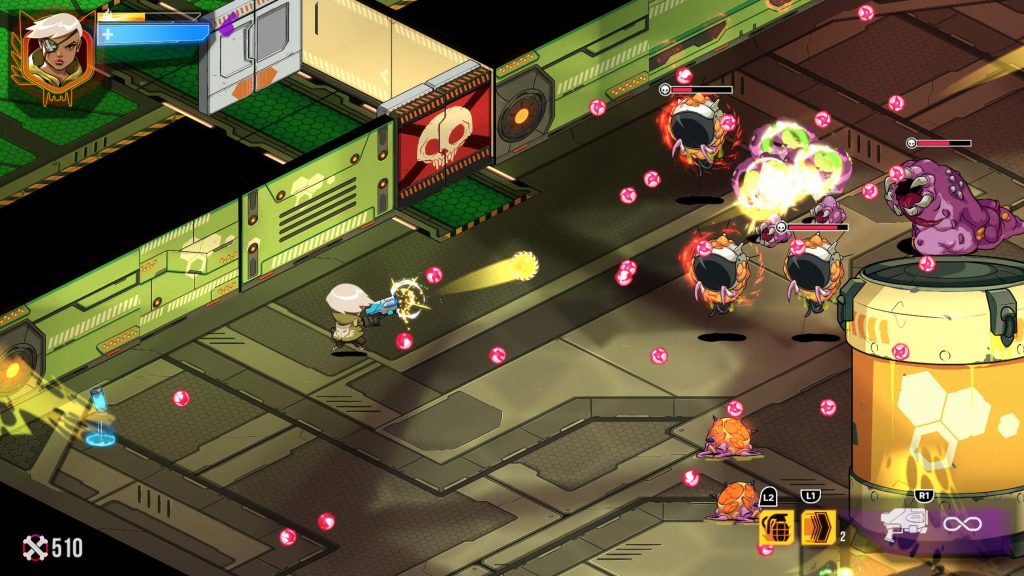 You start off with one ‘cat’ and these allow you to respawn where you die.  You can purchase more cats as the game progresses but when you respawn you don’t get any ammo back and whatever room you died in will have reset, in terms of enemy damage.  If you run out of cats, you’ll just go back to that act’s checkpoint which is a small structure in the middle of the level where you can spend money.   You can actually walk back to the checkpoint whenever you want and all your cats will be replenished.  And before long you’ll have lots of these, so you’ll have to do pretty poorly to run out of them.

In line with this not being a roguelike, the levels here aren’t randomly-generated.  This should give the game a bit more of a defined, structured feel but it doesn’t really and that’s because of how each room is structured.  When you enter a new room, enemies will just teleport into it until you’ve killed enough to clear it.  This feels a little messy to us as it means you can’t just clear part of it and focus your attention on the next part.  They will teleport in behind you, taking any kind of strategy out of the equation.  This is what we meant when we gave the Doom comparison.  But it does make for some intense battles later on in the game and the difficulty does pick up quite a bit however we did start dreading going into each room by the end as you knew you were going to have five minutes of frantic action to get through it and with the number of enemies, bullets and traps in each room, you’ll likely use up a few of those cat lives as you restart the room over and over. 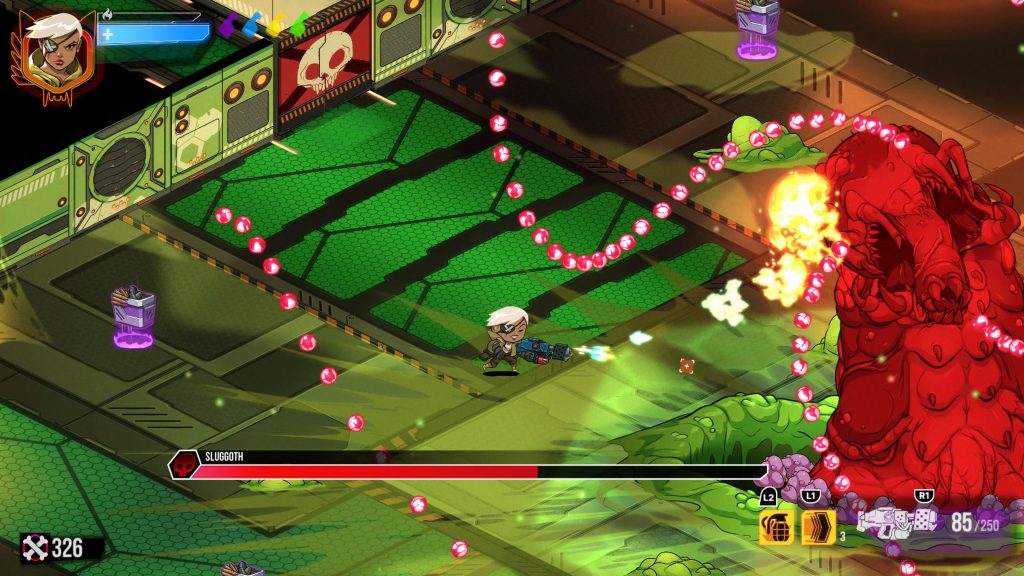 Wildcat Gun Machine is a commendable effort, especially as a debut offering from a new studio, but for everything it gets right, it feels like it gets something wrong.  For example, it has an upgrading system so you’d think that you’d just prioritise damage and armour, right?  Wrong?  The upgrades are mainly for speed and your dash move.  You know, the two things you upgrade last in other games.  Likewise, the slightly messy level layouts and reliance on keys take away from the fact that these levels are designed.   There are a lot of weapons to choose from but none of these really seem to improve your damage output all that significantly, nor do they require an adaptation to your playstyle.

The issue, especially later on, is that enemies take a lot of damage which can always take away from the fun a little in shooters.   No-one wants bullet sponges, especially a whole room of them.  None of the guns are set up for high damage output as such (and enemies level up anyway so you’re always killing them in about the same amount of time) and that’s disappointing given the wide selection of weapons.  There’s definitely some fun to be had from experimenting with them all but the amount of tactical variation they offer you is quite limited. 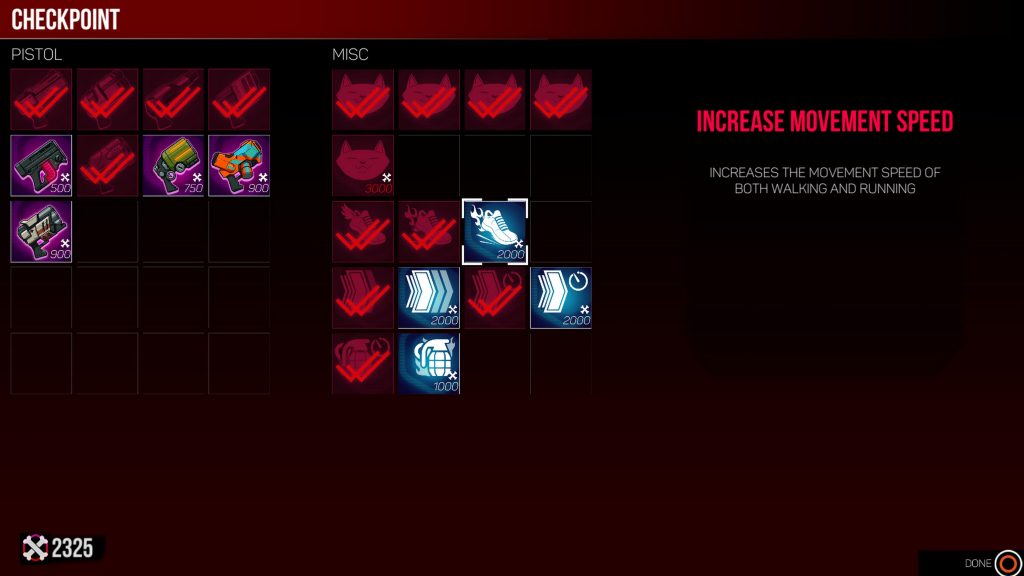 We recently played The Ascent which had an great array of weapons to experiment with and they genuinely had tactical value.  There’s none of that here.  Instead it’s all just a bit mindless and that’d be fine if this was some sort of Smash TV style title but there’s one element that takes away from the action a little and that’s the visuals.

Don’t get us wrong, Wildcat Gun Machine looks nice.  The isometric visual style and cartoony animation make for a cute looking game but it just doesn’t help the action.  Aside from actual gameplay issues like trying to judge where a bullet actually is in this viewpoint, something we struggled with, there’s also the fact that the smoothness of everything and the slightly slippy, out-of-step animation makes everything feel a bit slow.  The viewpoint is also a bit too zoomed in, meaning that you’ll often be hunting around for that last enemy (something that’s quite annoying if the room you’re in has a lot of traps). 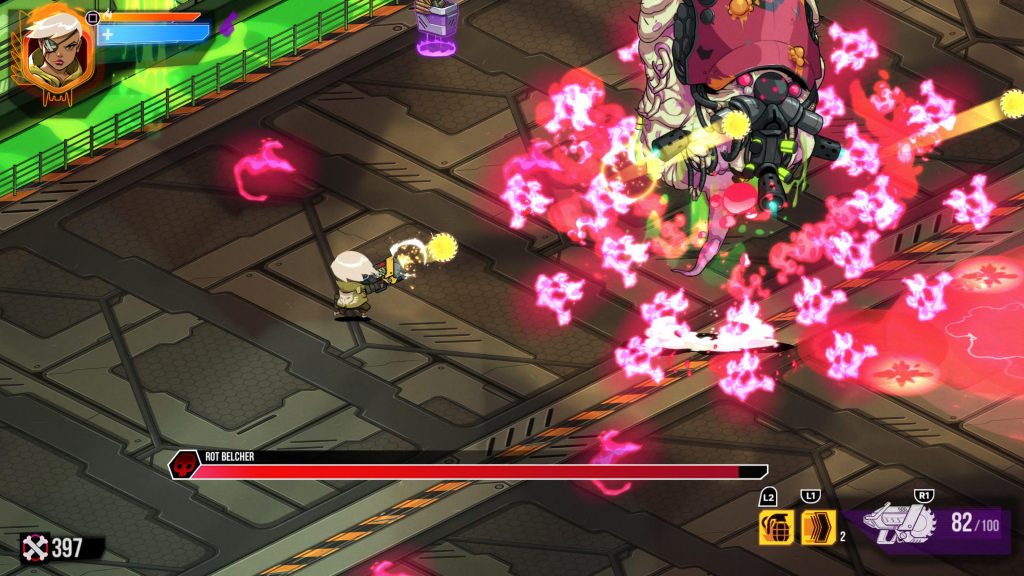 This theme continues with the music which is high quality and well produced but often quite annoying.  The music in Act 1 for example has an irritating siren noise all the way through it, while in Act 3 there was some other sample that dug away at our brain until we had to turn down the volume.

With all that said, there’s a lot here to like.  The action can be reasonably compelling at times, especially when you warm into it a bit and once you get past the first act, the action ramps up a bit.  The game is certainly solid enough (although we did notice a little bit of performance drop at its busiest moments (and that’s us playing on the PS5) but nothing major) and as we said, it’s a good debut effort from a studio that is worth keeping an eye on.

Wildcat Gun Machine
6 Overall
Pros
+ Nice visual style
+ Some decent action
+ Not a roguelike
Cons
- Visuals don't always help the action
- Is never particularly exciting
- Quite repetitive
- Upgrades a little underwhelming
Summary
Although stylish and competently made, Wildcat Gun Machine is a twin-stick shooter that's just a little lacking in excitement and tactical variation. There's some fun to be had but the genre has seen better.