This War of Mine has been around for a while but This War of Mine: Final Cut now arrives on PS5. Obviously it is mostly the same game as before but there’s been new content added and with current world events the scenarios hit different. 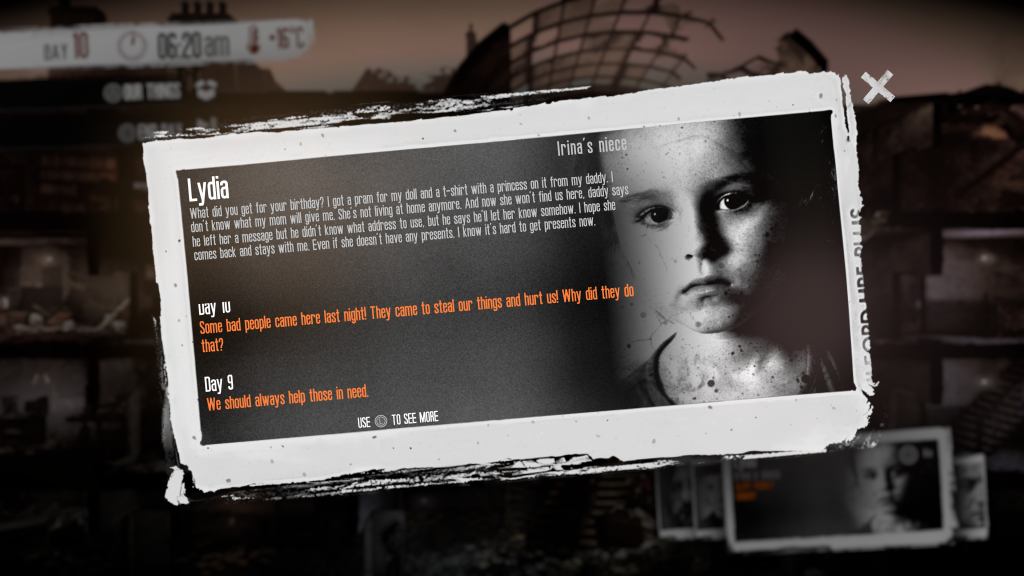 For those who don’t know This War of Mine has you surviving in a war torn city called Pogoren in the fictional country of Graznavia. You don’t play as either side in the war but as civilians left behind who need to scrounge, craft, defend and survive until the ceasefire comes. It’s a Rogue-like in a way in that you have one attempt and if all your civilians die then it’s game over and you start again from Day 1.

When you first start a run you’re given a random collection of civilians and start in a random base. Each civilian has a unique personality and skill set which will make them useful for different jobs that are required to survive from day to day. There are two phases to the gameplay. During the day your characters are at their base and can craft items, eat and rest for the second phase at night, where one person can go out under cover of darkness to collect materials, food, medicine or weapons whilst others can sleep or stand guard in case people come to your base looking for some easy loot. 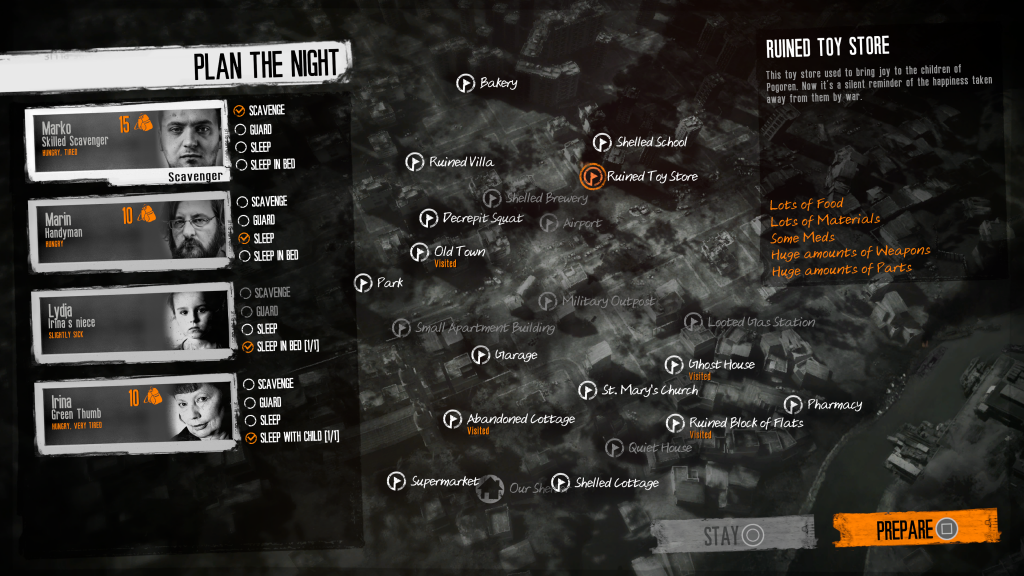 During the day you can switch between each character and you manually control them, making them run around the base and interact with the different elements. You start with a crafting table where you use materials to make things like beds, metal working benches and a stove at a basic level and can later create heaters for cold weather, animal traps and moonshine stills. Everyone can do anything, but some are more efficient. So you could have someone who was a craftsman before the war who can build using less materials whilst others are better at cooking or can barter better with people who come to the door offering to trade. There’s also a benefit to who you send out scavenging as different people move at varying speeds and can carry more or less items or defend themselves better if it comes to combat.

There are a range of locations you can pick from a map which expands as the days pass. There is a description as you hover over each location which gives you hints as to what you will encounter and what items you can hope to claim there so it’s up to you whether you want to go for a safer scavenge or risk getting injured or worse for a bigger bounty. You’ve also got the choice of whether you want to become a looter yourself or be respectful to your fellow man. Stealing from the old couple is easy but it’s not just your conscious you’ve got to think about but that of your characters. As well as tiredness, hunger and illness you must take care of your characters’ morale and, depending on the character, stealing or killing innocents will have a huge impact on their self-esteem which can have massive consequences. 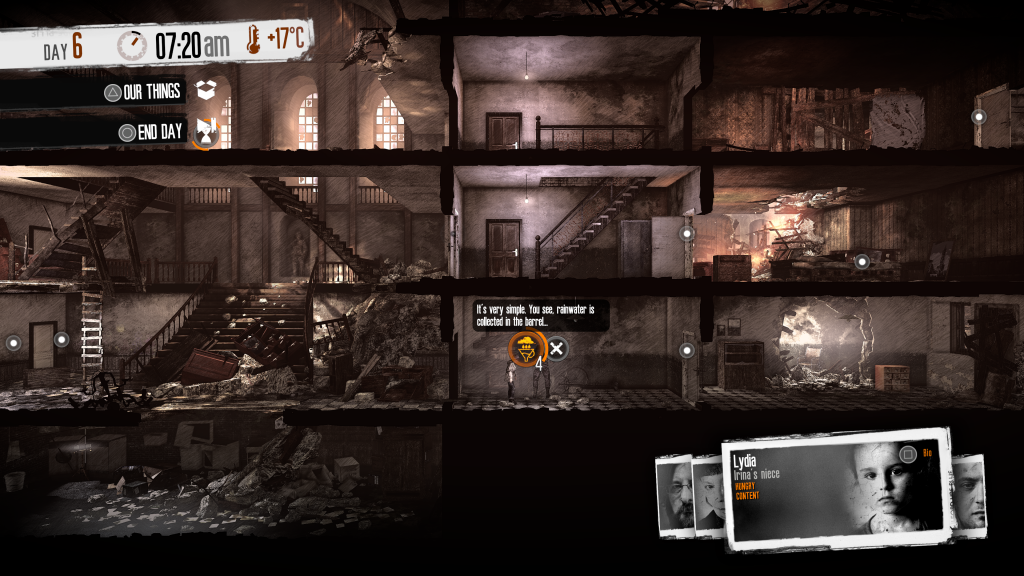 That is the loop of the game. Spend the daytime crafting what you can to aid in your survival whilst maintaining your characters’ condition and then go out into the night to try and gather what you need, whether that’s food or materials for your next craft. During the day different people come to the door that are random events that you can decide to interact with or not whilst the locations you visit at night can also vary slightly in what events can take place there. You may need to juggle certain things thanks to unexpected illness or a mistake leading to a character needing to rest or being lost but if things are going okay you’ll get into a rhythm.

Because of that things can get a bit repetitive. The length of the game can vary as can everything else but This War of Mine isn’t a short game so although on repeat playthroughs you can choose all sorts of different variations whether that’s the characters you start with, the length of the war, how long and cold the winter months are and how dangerous zones are you’ll still fall into a similar pattern each time. You’ll need to build the same things to survive, so the goals in the day sections won’t change between playthroughs and then it’s up to you which zones you attack so you can be a little riskier or play it safe but again you can get into a routine.

The controls can also let things down a little. You’re under a time limit so during the day you want each character doing a job, whether that’s building, cooking, sleeping but as you need to control each character directly you’ll waste time moving each one into position and getting them where you want them to be. It’d be quicker if you could select a character and then cycle through to a station to tell them to go do something but this isn’t an option. It’s generally not a massive issue it just feels inefficient and the controls in general can feel clumsy with stairs always being a bit of a pain and selecting which item you want to interact with when options are close to one another is also fiddlier than it could be. 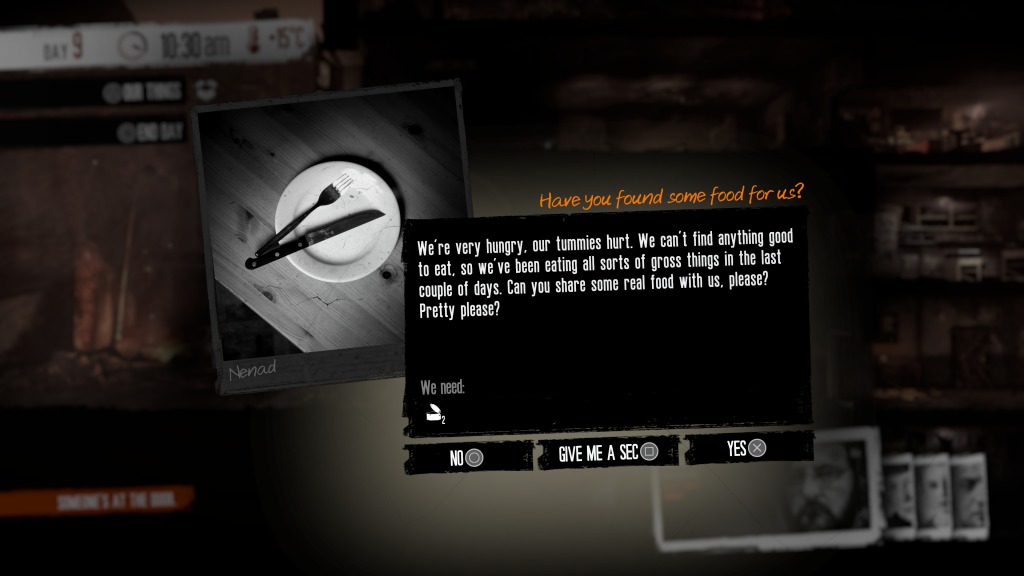 It doesn’t overly effect what is generally a slow paced game, even if you are against the clock, but it can just add a little frustration and take you out of the moment which is where This War of Mine is strongest. There is limited gameplay variation and the controls could be better but it’s the individual stories that are the games strengths, though they are generally quite dispiriting. This is also true of the DLC that is available separately which focuses on specific characters and their stories in shorter scenarios.

For example my first playthough was a massive learning curve. There is no real tutorial so you just have to feel your way through and try different things. I didn’t know what was important to make first and I didn’t really consider having people sleep in the day for a while so had to struggle with who to send out at night. I also didn’t really pay attention to the descriptions on locations so would just bounce about. I turned up at an old couples house and just started taking stuff as I didn’t realise things were labelled differently if they were owned by someone else or free to take. The husband then started to follow me around and I saw it as an opportunity to test out the combat. My character got back to the base and nobody was happy about it. 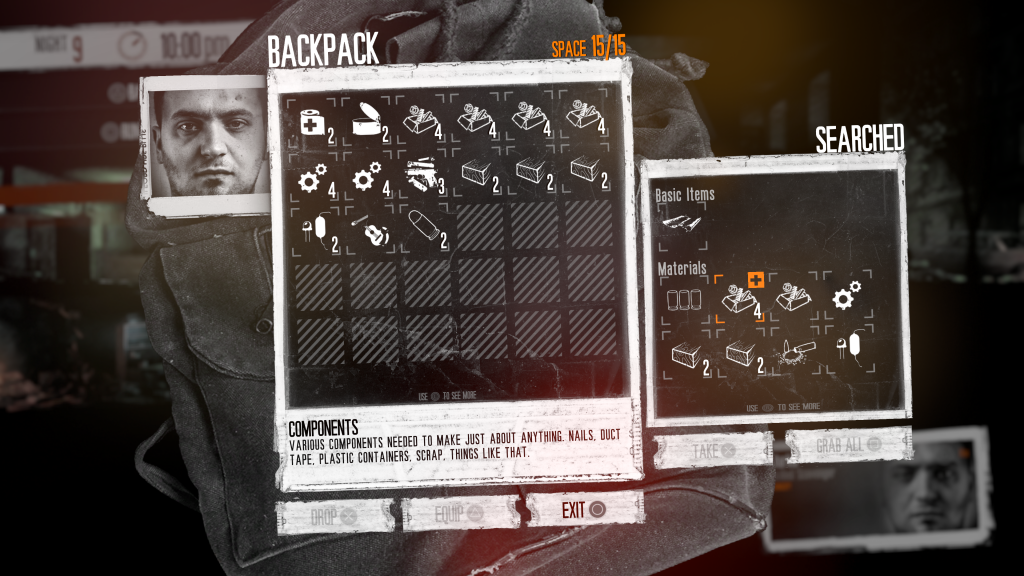 I then sent someone else to a supermarket. There they encountered a soldier trying to take advantage of a woman. I stepped in and my character was not strong enough with their crowbar against the man’s knife and they died. My base was down to two and one had been injured defending the base from an attack as we had insufficient weapons and defences. I bandaged him up, sent him out that night and on his return my other character had taken his own life. Another character arrived asking for shelter but needless to say things did not end well for either of them.

It is an affecting game which makes it worth a play, but for me despite the variations there isn’t much replay value. The gameplay and targets don’t change enough and the playtime is long, so after one successful run I was done. For the time being at least. The PS5 isn’t pushed massively but it is an attractive game. All the colours are muted and there’s a textured overlay effect which is very nice. Photos are used for the characters to add that extra attachment and there is only a little bit of loading each morning. 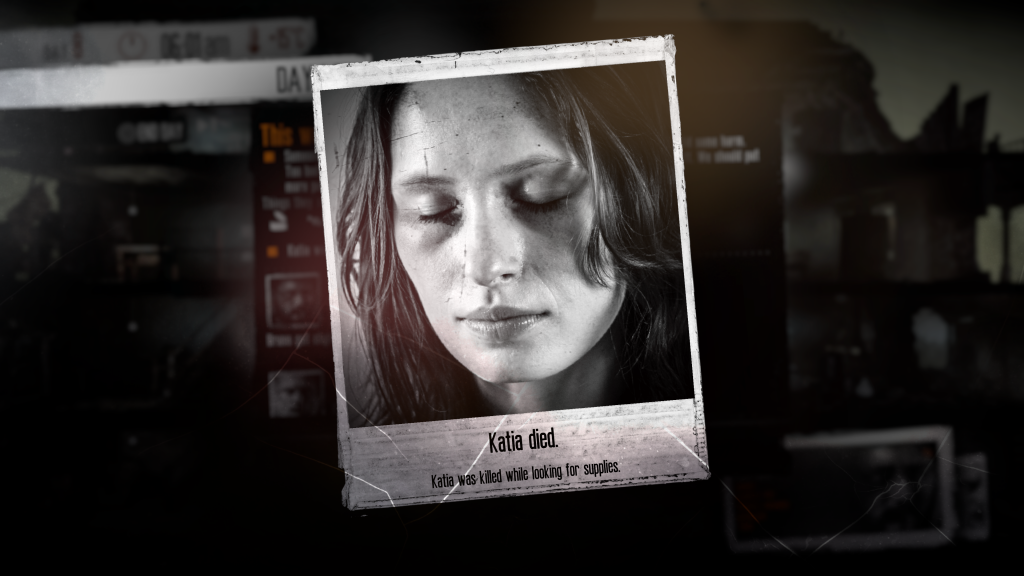 This War of Mine: Final Cut is certainly an interesting title which has a poignant message, especially at this time. Gameplay-wise it’s only okay with the randomness and variety of options you can take not making as much of a difference as you’d like to encourage multiple runs. It’s certainly worth a look, just make sure you’re mentally in the right place for it as unlike other titles this doesn’t glamorise war in any way. Quite the opposite in fact.

This War of Mine: Final Cut
7 Overall
Pros
+ Has a powerful message about war
+ You feel strongly for your characters
+ Different characters add some variety
Cons
- Controls are a little clumsy
- Playthroughs are too similar, effecting replayability
Summary
This War of Mine: Final Cut offers more content than previous versions and creates some powerful narratives. Runs tend to play out in a similar fashion despite the variables on offer but it's certainly worth experiencing.