Weapon of Choice DX is a run and gun shooter from one-man studio Mommy’s Best Games.  As with the recently-released Shoot 1UP DX, from the same developer, the game started life a long time ago on the now-defunct Xbox Indie Games service back on the Xbox 360 in 2008.  This updated version rebalances the gameplay, adapts the game into a wide-screen format and ups the resolution to 4K at 60 frames per second.

The game opens with a little bit of story.  A bit of nonsense about aliens invading the Earth.  You play as the Solus Operatives, a group of soldiers, each uniquely armed with their own weapons.  However, as with Shoot 1UP DX, there’s a bit more to how all of that works.  But before we get into that good stuff, you’ll need to know about the basics. 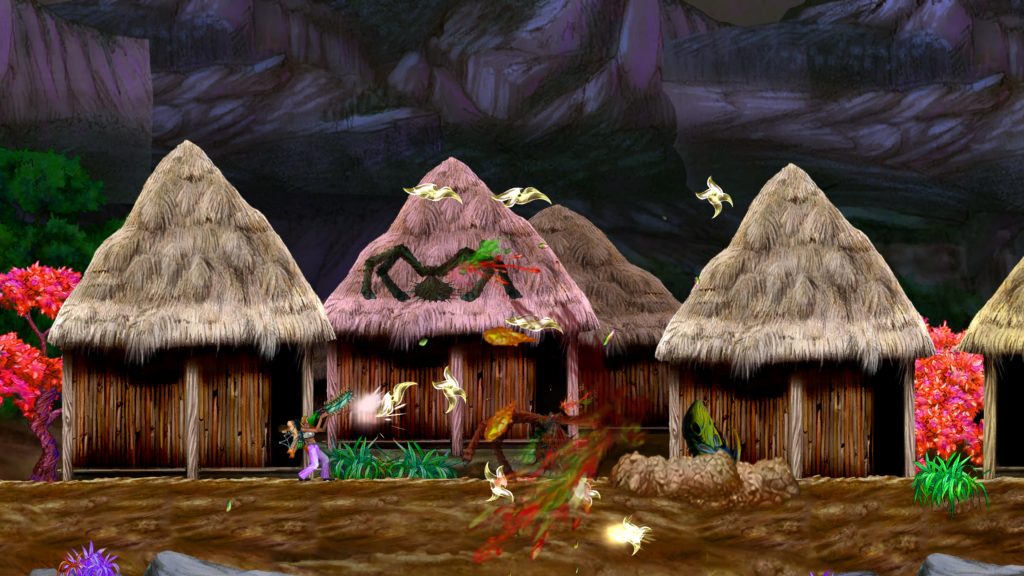 As a run and gunner, you’ll run along, climb obstacles and shoot enemies.  That’s what you’d expect from the genre of course.  However, what you get here is a slightly looser feel than, say, Contra.  There’s a slightly chaotic feel to how you move, especially when you factor in the Spiderpack, a device that lets your character climb up walls and hang from trees while still being able to shoot.  The stages in this game do have a degree of verticality but they do not sprawl.  Think of it like the original Bionic Commando and you’ll have a good idea of what to expect.

The game uses a twin-stick firing set up.  You move with the left stick and aim/shoot with the right.  That means the face buttons aren’t used and instead you’ll jump with L2.  It takes a little getting used to but soon feels natural enough.  Beyond that it all comes down to the weapons that the title of the game alludes to and this is where the game gets most of its depth from. 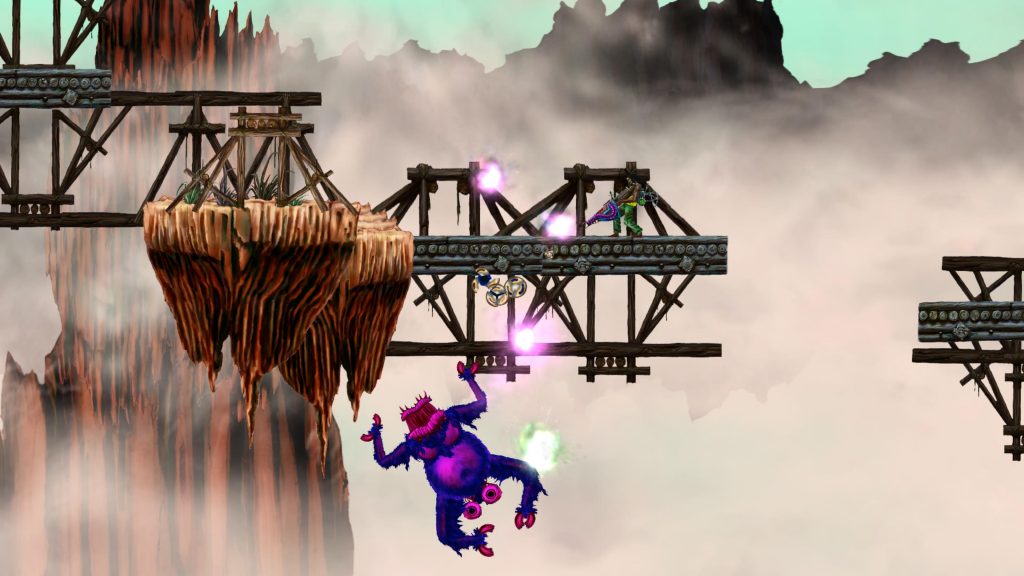 Each operative has a standard machine gun type weapon and then a specialist weapon too.  These are varied and wild.  The most interesting is the jet blaster wielded by Xerxes, the first character that you’ll see.  This gun is essentially a flamethrower but it is so powerful that it’ll send you flying through the air backwards if you aren’t careful.  Other operatives have guns fire discs, rockets, balls and so on.  You just need to find the ones you like the most so it is worth experimenting.  Each weapon also has an alternate firing mode which is accessed by holding R2 and again it is worth trying them all to see which ones work best for your playing style.

Now, Shoot 1UP had a tremendous gimmick.  It was a vertically scrolling shoot ’em up where you carried all your lives with you.  You could gather up to 30 lives but that meant controlling a phalanx of 30 ships.  It was quite brilliant.  Well, Weapon of Choice has its own gimmick.  As you play you’ll run into people you need to rescue.  These people are fallen operatives.  Complete a level while carrying them and they’ll heal up and join the roster of playable characters.  If you fall in combat you can select another operative who can then carry you to the end of the level, making the original character playable again.  It works well but the system does mean that death has to come a little quicker to balance things out.

This is handled quite well though.  On the face of it, the gameplay is pretty unforgiving.  If your operative takes a single hit, they are done.  However, the game uses a clever system where it slows right down if something is about to kill you, giving you a chance to react.  This sounds like it could make things too easy but in reality the system works well. 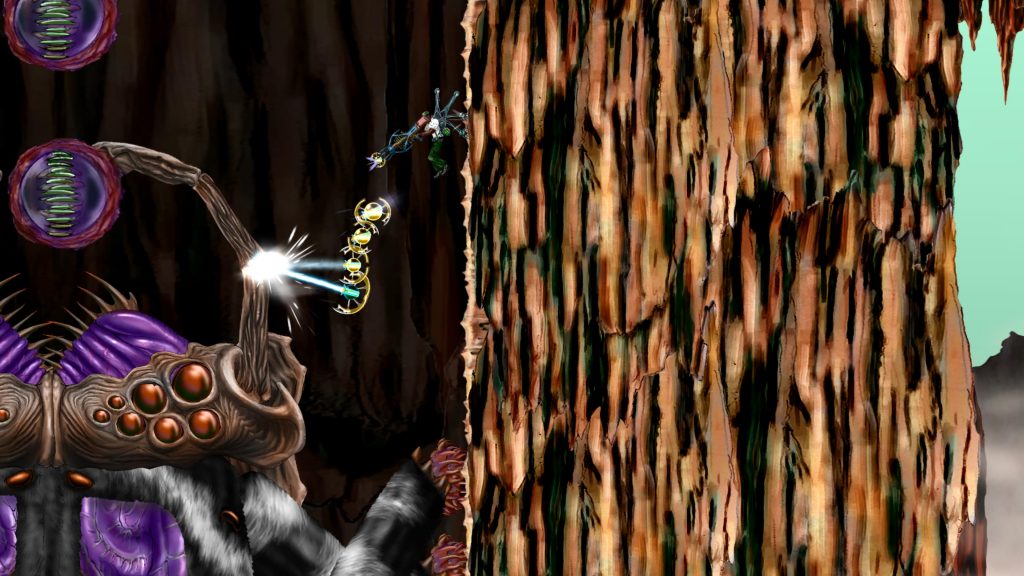 Before long, you’ll have gathered up all of the operatives and they’ll now be your entire stock of lives for a run through of the game.  The only issue though is that the game is pretty short.  Ten minutes is all you’ll need to finish a run (which will take you through three levels).  To mix things up, there are three routes you can take, giving you a few more levels to try out.  The each have operatives to find and MBG ‘pies’ to collect but it is fair to say that the game isn’t exactly bursting with content.  The shortness of it might be a problem for some but Contra is only really twelve minutes long and we’d rather this type of game was too short than too long.  And with the various routes and all the weapons to try out, the game will definitely keep you interested way beyond that initial running time.

The most significant problem with the game is that we’ve had several runs ruined by different bugs.  If you can avoid them, then you can finish the game without too many problems but we had some levels go to pot because of bosses that wouldn’t show up or because we fell through the scenery.  The game definitely has more than it’s fair share of these moments but we do expect them to get ironed out in future patches. 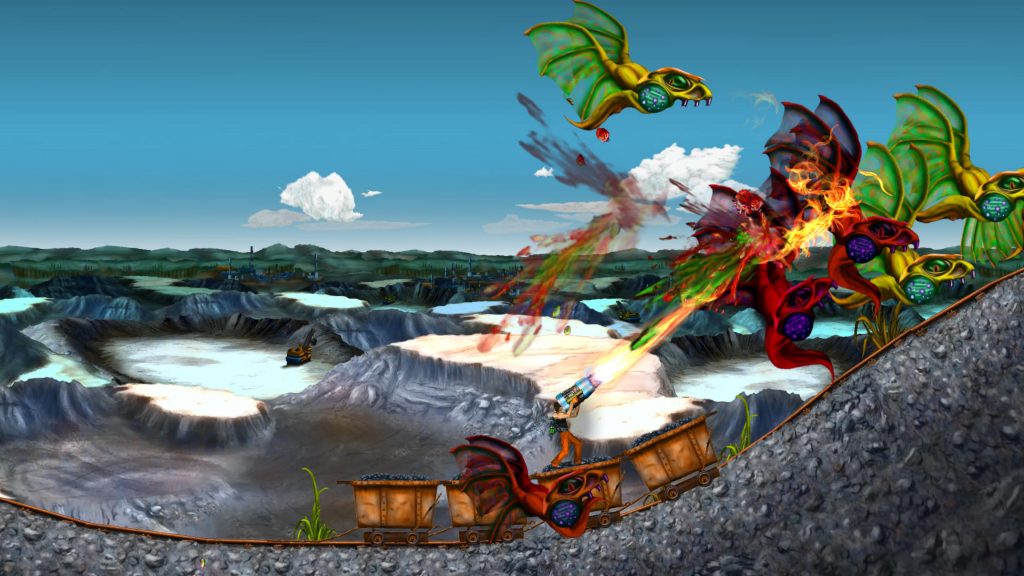 On the plus side, the game is a ton of fun to play and it doesn’t feel like the typical po-faced run and gunner.  It’s a lot of fun and the presentation is somewhat wild.  From the crazy hand-drawn art style that lends to some unique enemy designs to the hard rocking soundtrack, Weapon of Choice DX comes out of the gates swinging and is a game full of confidence.  It’s not an immediately attractive game though and some of the interface and introductory screens are surprisingly ropey but the in-game visuals are colourful and off-kilter offering a really unique look that we ended up liking a lot.

It’s a little hard to know if you’ll (yes, you) will like the game though.  We like 2D old-school shooters, we like gameplay gimmicks and we like short games that focus on replay over running time.  It’s unusual, it’s action-packed and it’s fun.  What more could you want?  Well, it’s cheap too.  Weapon of Choice DX is definitely worth a look.

Weapon of Choice DX
7 Overall
Pros
+ Unique twist on the classic run and gun gameplay
+ Original visual style
+ Some good replay value and variation
+ Good action that doesn't overstay its welcome...
Cons
- ...but some might find it too short
- Controls might be a bit fiddly for some
- Out of gameplay presentation is pretty poor
- Has a few bugs to iron out
Summary
Weapon of Choice DX offers up a unique and crazy take on the classic run and gun genre. It may be pretty short but there's a fun, focused shooter here and one that does off some replayability too.