While many of our contemporaries like to focus on the big triple-A titles, our roots here at PlayStation Country are in playing the indie stuff and it didn’t get more indie than the now-defunct Xbox Live Indie Games service on the Xbox 360.  While that service was plagued with some absolute trash (and a worrying number of “massage” games) you did occasionally get some gems.  Shout outs to Hidden in Plain Sight, RE: Get to Schol on Time and the other heroes of that era.

One of the really good games was Shoot 1UP and so it was a real surprise to see that game get a remake on PSN.  This isn’t entirely unprecedented (we reviewed Score Rush Extended back in 2016 which also was a remake of an XBLIG original) but even so, we didn’t expect to see this on the PS4. 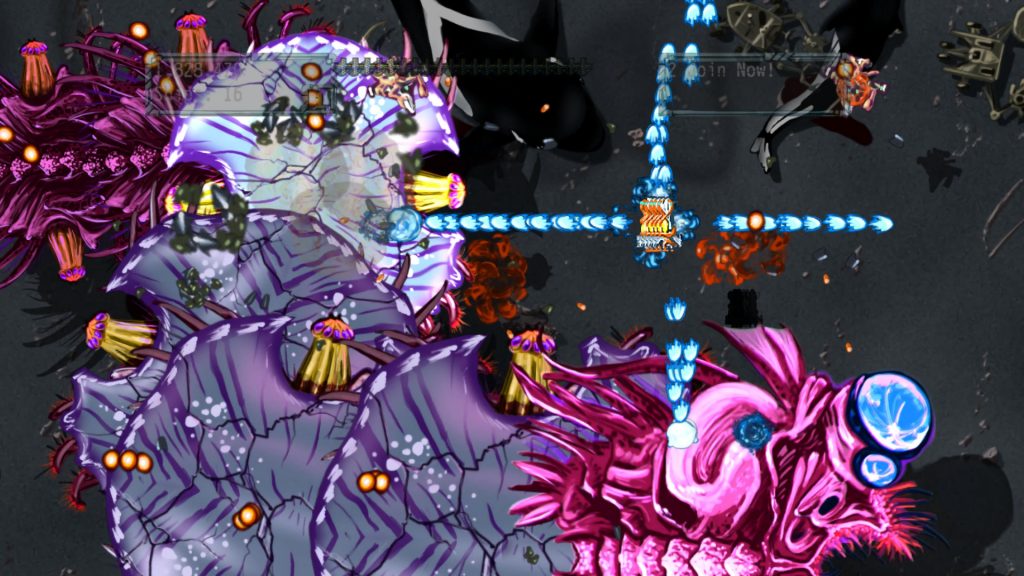 On the face of it, Shoot 1UP DX seems like a straightforward vertically-scrolling shoot ’em up in the classic arcade style but it has a massive twist on the gameplay.  While you start with three lives, you actually carry your spare lives with you.  Each ship fires in sync and the formation of your phalanx can be expanded and contracted.

This allows you to switch up your playstyle on the fly.  Tighter formations are safer, allowing you to dodge enemy formations and firepower with more ease but if you expand, you’ll cover more airspace with your bullets.  Also, expansion will also trigger a powerful beam weapon which works well against larger enemies.  If you fully expand, your ships will go into the far corners of the screen and will shoot inwards.  It’s a very cool system and one that we’re surprised hasn’t been stolen in the last decade. 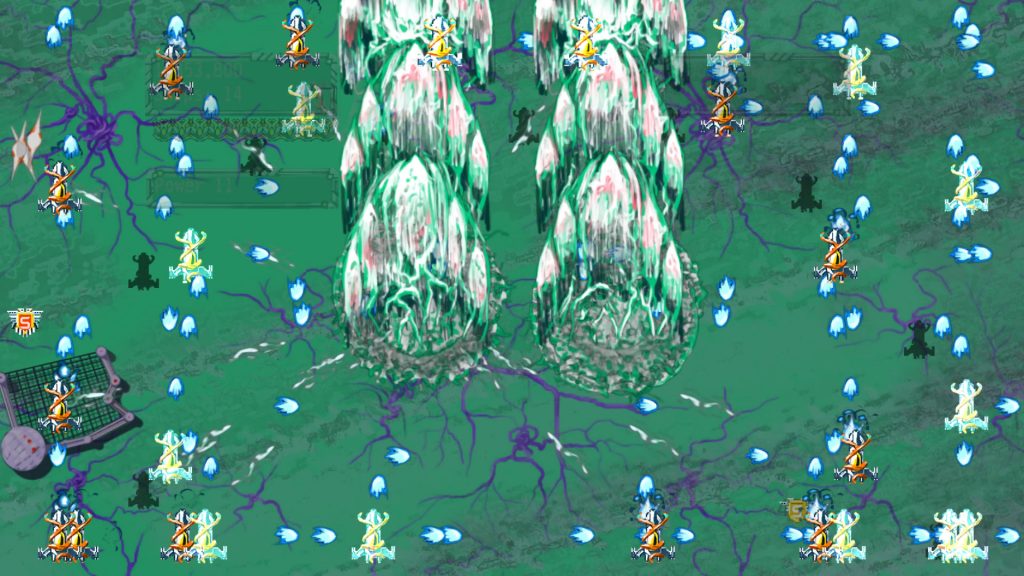 Most shoot ’em ups tend to focus on precision this is a bit more of a chaotic affair because the game throws up plenty of extra lives as you progress.  It’s not uncommon to have twenty or more ships on the go at one time and so weaving through bullet patterns then is a bit trickier to judge but the trade off between playability, chaos and excitement is great here.

Aside from six levels of solid action you also get alternate routes, allowing you to choose between easier or harder routes, and some pretty epic boss battles.  What we really like about Shoot 1UP DX is the creativity of these boss designs.  So often in shoot ’em ups you get the same old tired encounters.  You know the sort of thing:  big tanks, trains with cannons on them, walkers, mechanical spider bosses.  That’s not the case here at all.  There are some very wacky and wild bosses, not least the giant woman with detachable cannon breasts.  It might not be sophisticated but you won’t have seen its like before. 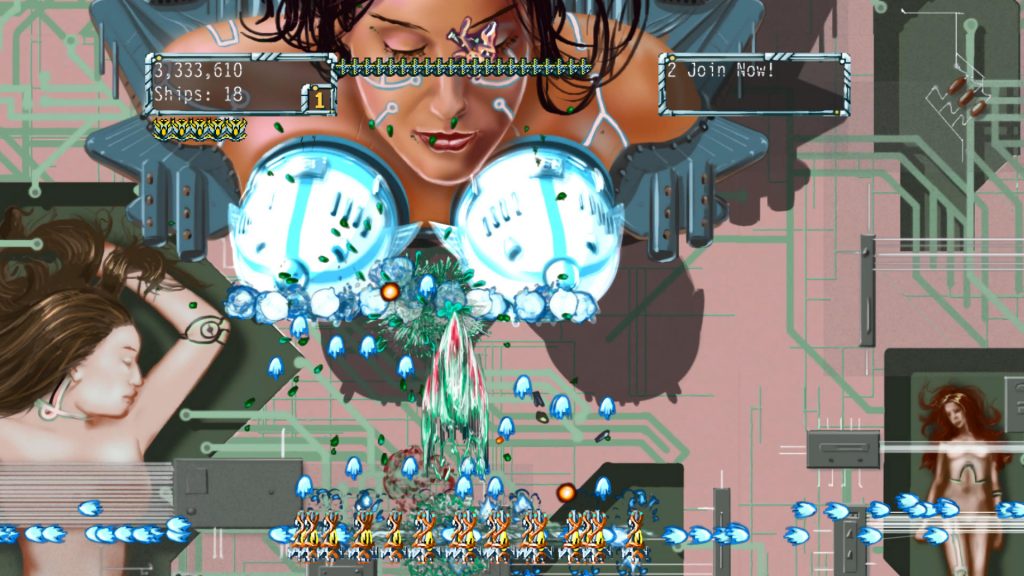 The creativity behind Shoot 1UP DX is what makes it so good and it delivers a big hit of shoot ’em up action without being dragged down by memorisation or lengthy levels.  Indeed, it might be a bit too short and simple for some shoot ’em up veterans but people looking for fun will love it.  If you want a more hardcore experience then playing it on the hardest difficulty while going for big scores (mainly by keeping your phalanx expanded as you get more points for taking that risk) is the way forward.

There are a couple of nice, thoughtful elements in the game too.  A speed setting allows you to take the game down to 25% (for an easy, if unexciting stroll through the game) all the way up to 200% (for some absolute madness) and there’s a mode where you still earn ships but you can’t expand them which makes the game feel a bit more like a traditional shoot ’em up.  This is a nice addition and may well be your preferred way to play once you get over the novelty of the game’s core mechanic.  We liked both ways though and so it’s great to have the choice. 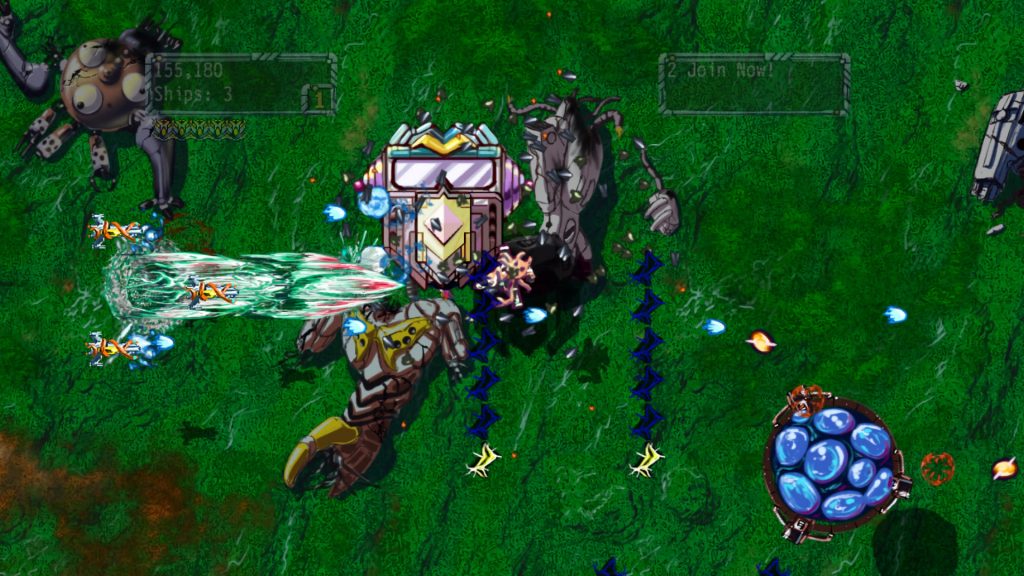 While we did like the game’s creative imagery, its roots as a cheap-as-chips indie game from 2012 are quite clear.  The game isn’t ugly but it does feel like you’re being attacked by large static images sometimes.  Everything looks a bit flat and dated but you won’t really notice that when you are playing and thankfully the action remains pretty clear no matter how much is going on (and there is a lot!).  This is still a cheap game and so we wouldn’t expect current gen visuals and anyway, it does a job.  This is all backed up with some thumping music although apparently a few tunes didn’t make it into the final cut.  Hopefully they’ll be added later.  The sound effects are a little on the weedy side though with explosions sounding like distant snare drums.

Presentation issues aside, this is a lot of fun.  It’s a little too easy maybe (but not in the light of the current trend of making shoot ’em ups that throw a twenty minute Platinum at you) but it is enjoyable and customisable.  The two player co-op is a nice touch too, even if it is just couch co-op rather than online.  Thankfully there are online leaderboards which should encourage some competitive play too.  It may not be the most technically adventurous game ever, and is pretty far from triple-A) but Shoot 1UP DX is a legit banger, an indie treat and a blast for fans of shoot ’em ups.

Cons
- Visuals can be a bit flat
- Is quite short
Summary
Getting a remaster of one of our favourite Xbox Live Indie Games titles is a real treat and almost a decade later Shoot 1UP still delivers fun and novel shoot 'em up action in spades.