We’ve been reviewing games on this site a fair few years now, yet we’ve never reviewed a Madden series game on PlayStation Country. Heck, this reviewer has been playing the series since the 2003 iteration on Gamecube. After playing pretty much every 360 version, it’s fair to say we’ve lapsed into occasional Madden players with our having dipped into every other year until M20 on PS4.

So here we are on the eve of the 2021 NFL season and we’re blessed with the release of Madden NFL 22. Last year’s iteration Madden NFL 21 was critically mauled, relatively speaking, for not really bringing anything new to the table. Thankfully, EA have listened to their critics and what we have here has a good blend of the familiar and some new features.

The Yard features once more, being a FIFA Street styled six-on-six matchup. It feels like a sop to those within EA Sports that can’t justify releasing it as a full release, no doubt unable to make it work on the end of year balance sheet. Not to mention the fact that it can feel very twee and a bit cliched, London being represented by multiple double decker buses at the side of the pitch for example. 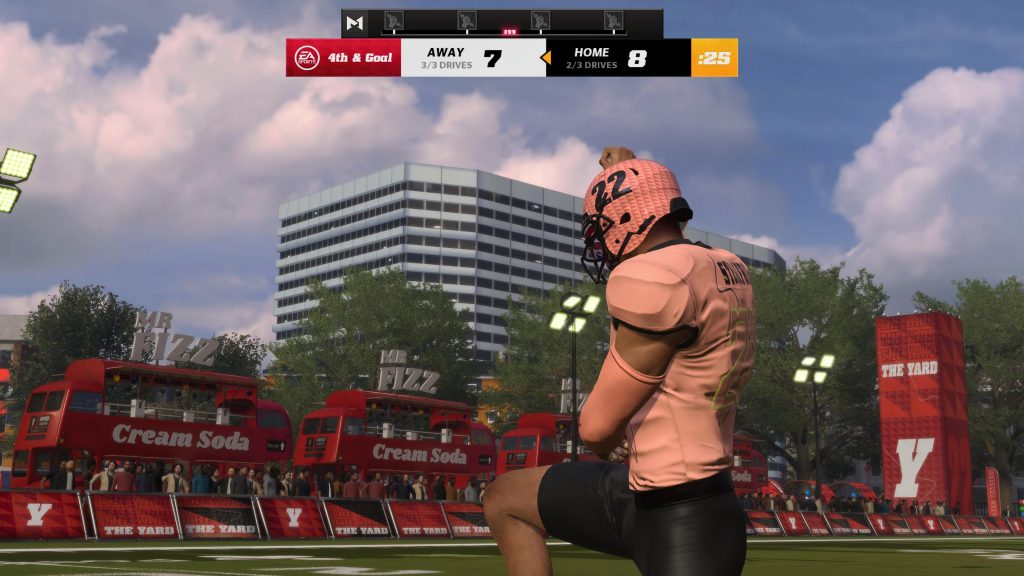 The Yard sticks around within Face of the Franchise mode, the closest thing that there is to a story here. You start as a pre-draft prospect and it’s down to you to show your mettle in a series of training drills and interspersed by dialogue with your agent, play a few college level matches against AI opponents. These college games are depicted in a flashback sort style, though to be honest, all but the most inept player will fail to prevail. They are notable in that they’re a prelude to a forthcoming NCAA Football title, the first since 2007 we think, though it’ll likely only be available to the US.

You can also access the college teams via an online mode (Campus Legends), though sneakily it’s the only way to access the all-star teams such those from USC featuring great alumni who played for them. Let’s just say we played one match against an online opponent and it did no go at all well. Our ineptitude and inability to score was second only to Arsenal’s opening the season. Annoyingly, the default playbook available to you had a ‘fake spike’ play as the standard play, so it was all to easy to waste a valuable down through a simple tap of 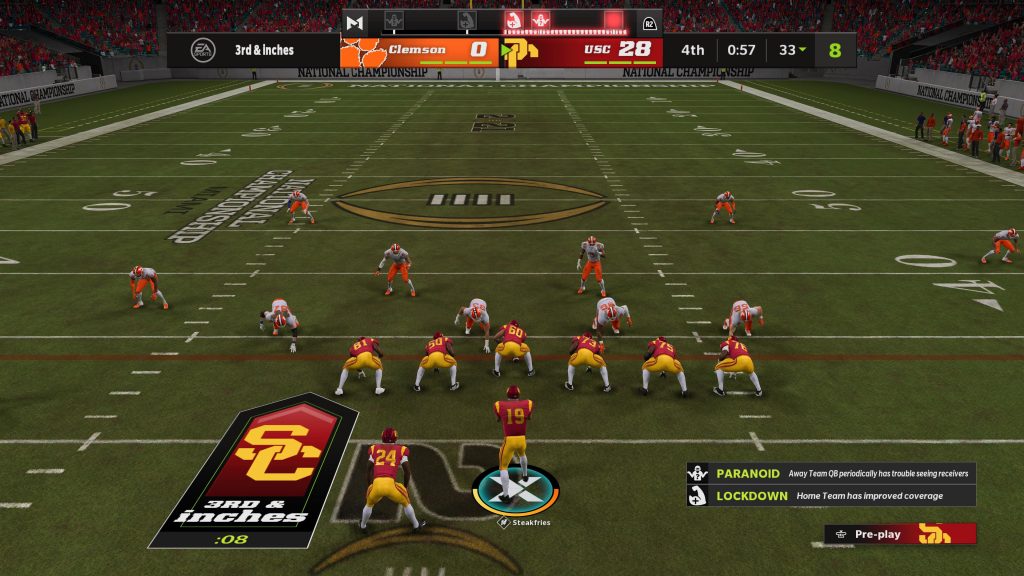 After having completed your face of the franchise pre-draft shenanigans, you’ll find yourself drafted, in our case the worst team in the NFL last season the Jacksonville Jaguars. In reality, due to  a strange quirk, the New York Jets were actually worse and were in pole position to snag the first overall pick in the 2021 draft until they inexplicably won a game that meant they didn’t get the first pick. Yes, they’re shit and will probably remain so, though at least they’ve not got the shockingly inept Adam Gase are their head coach. It did feel like we were destined to be first pick regardless of our actions, but that needs qualification through further gameplay.

So we found ourselves playing as the new Jaguars QB in a new franchise that we’ve yet to revisit. Mainly due to the sheer wealth of other modes available in Madden NFL 22. As well as those we’ve mentioned you have the ever-present cash cow Ultimate Team,  Superstar KO and Madden Championship Series. The last one being a competitive mode that we’re steering well clear of as we don’t really fancy getting our asses handed to us by randoms. 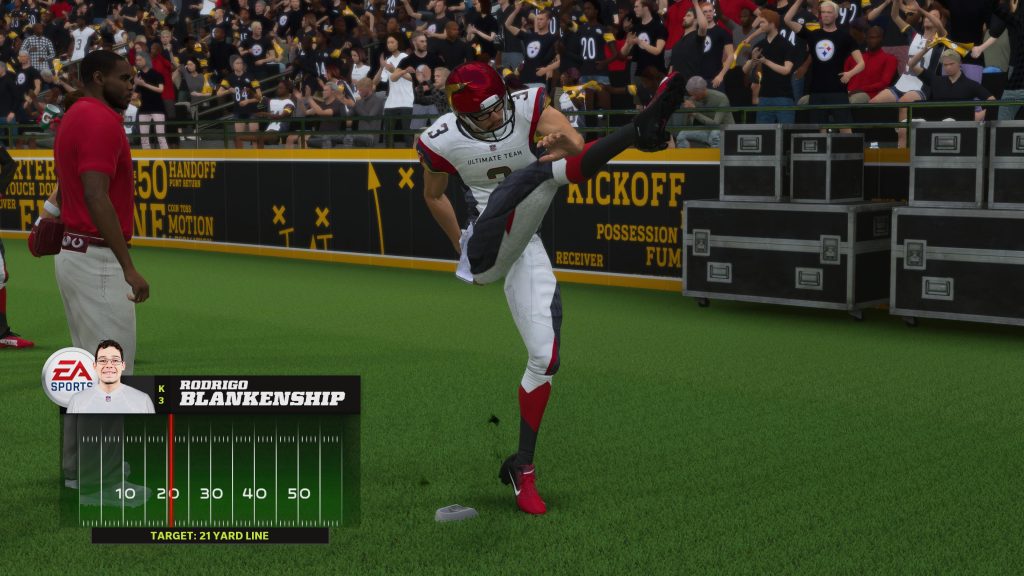 Ultimate Team is as addictive as ever, and no doubt familiar to anyone that’s played Madden or indeed, FIFA in the last ten years.  You can either play challenges to unlock better players for your roster or pony up real money to buy credits to buy better players. We stuck to challenges and occasional forays into the auction house to bolster our squad.

Regards the challenges, they’re generally win a game or stop your opponent from scoring. But every so often you’ll get one to force a fumble or to sack the opposition quarterback. The former came to us eventually but we must’ve replayed one sack challenge getting on for twenty plus times. Another little annoyance is the fact that the game is erratic in terms of giving you the option to restart a challenge rather than having to exit out to the menu. There’s no rhyme nor reason to it. 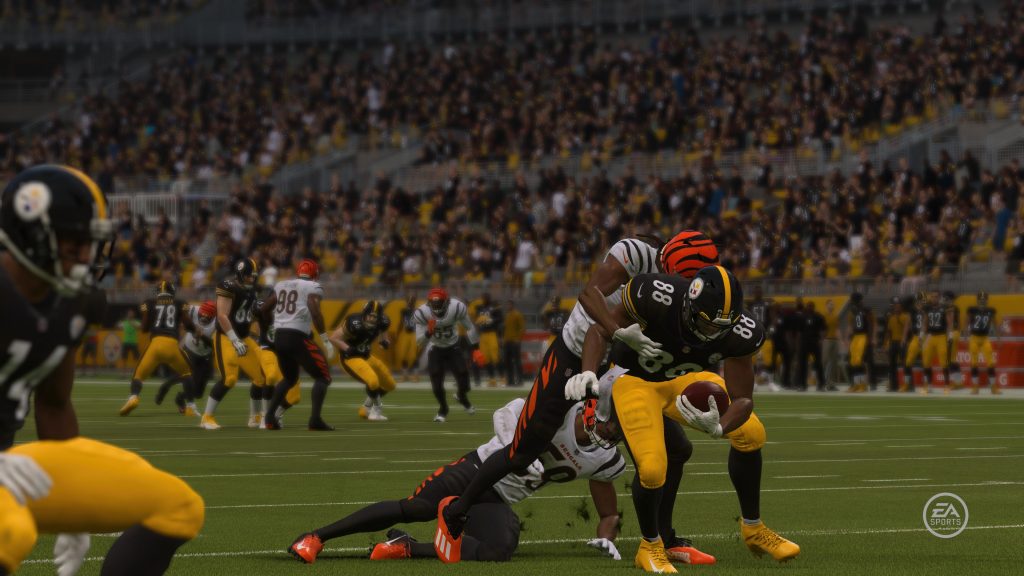 Presentation is as polished as ever, but similarly you can’t help but feel that due to being the exclusive NFL licence, EA have rested on their laurels a little in terms of innovation. We can’t help but wonder how things would pan out if the NFL granted a licence to 2K Sports too for example, but the league themselves are no stranger to stifling competition.

This being the second iteration on PS5, the haptics are well used here. Especially play clock timers and audibles being heard via your controller speaker. Though given the fact that is a far higher profile release than we usually cover, we’d be surprised at anything but. 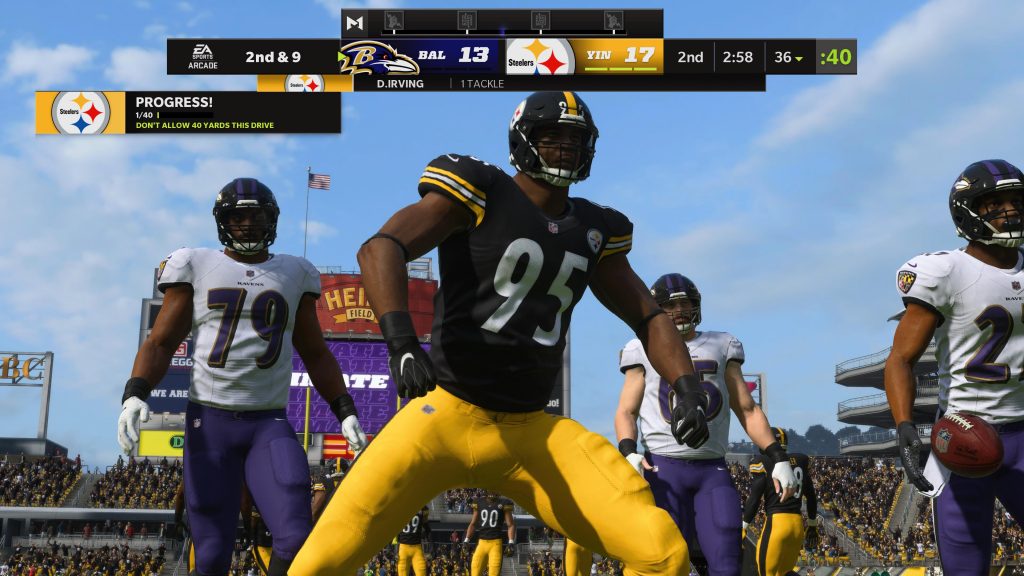 That said though, sometimes we’ve had a few odd glitches going on during games. One that kept happening was our having successfully fielded a punt from the opposition, but the commentary said we’d in fact fumbled the ball in the process. Even though we’d not. Another rather more annoying bug was our having been stuck in a loading screen loop after a franchise match. Upon killing the game, we’d lost our progress too. Thankfully a patch dropped recently, which hopefully resolves some of the issues.

Ultimately there’s so much to do in Madden NFL 22 that you could literally spend all day playing it instead of anything else. It has ‘just one more go’ nailed down a treat and the football is as good as ever. But we can’t help but wonder where the series would go if they weren’t literally the only game in town. Ultimate Team and Franchise mode are as compulsive as ever, it’s just a shame the former is so reliant on real cash being spent to get a decent roster without grinding challenges.

Summary
Madden NFL 22 is a good return to form for the series after last year's clunker. The NCAA teams are a good addition as well as confidently implemented PS5 haptics. That said, if you hate American Football, this likely isn't your thing.