Virtuous Western is a 2D puzzle game that’s dressed up like a run and gun shooter but is far from being one of those.  It comes to us from Nibb Games via the ever-prolific publishers, Ratalaika Games.  As such you should know what to expect from this one in terms of length, easy platinums and a wallet-friendly price tag.

The game sees you playing as a lone cowboy whose horse is stolen.  That simply won’t do and so you are tasked with hunting down the man responsible.  Of course, this is the Wild West and so he’s got himself quite the posse.  So armed with your trusty revolver, you need to fight your way to him. 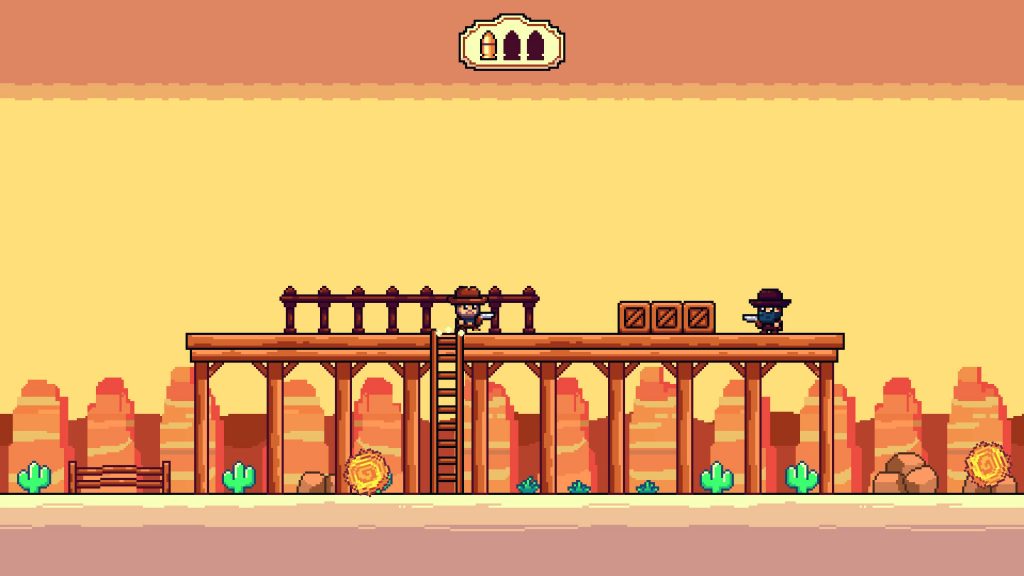 Like we said, that sounds like a shooter and while that is part of the mechanics here, each of the game’s 30 stages is really just a puzzle.  Your little gunman will start in each of the single-screen levels and there will be one or more bad guys to kill.  You’ll start without ammo though and so you’ll need to pick that up, one bullet at a time.  Enemies will shoot on site and various obstacles get in the way too, so your job is to figure out who to kill first, how to manage your ammo and how to get around obstacles.

So, for example, you might have a level with three bad guys and two bullets to pick up.  One guy might be behind boxes, the next up on a higher platform and the last out in the open with no safe way to kill him.  In that scenario, you’d need to pick up the first bullet and then let the first guy shoot out the boxes and then shoot him as he reloads.  Pick up the bullet behind him and take the ladder up to the next guy.  You’ll need to carefully time when you leave the ladder so that he shoots at you but hits the chain behind you.  That chain is holding a box and that drops on the last guy.  Kill that second guy and it’s onto the next level. 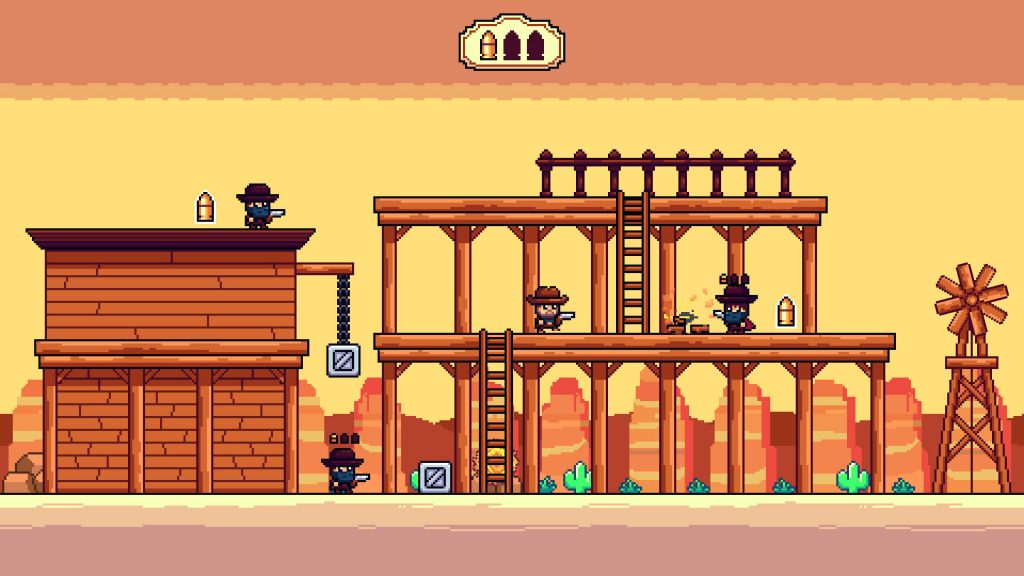 Across the 30 stages there aren’t a huge amount of new elements but the game does introduce shotgun enemies who take more than one bullet to kill as well as new elements like dynamite.  However, it’s all very gentle in terms of the progression but when you consider that at least a couple of the levels really are just quick tutorials that introduce these new elements, you’ll soon realise there’s not much longevity here.  Indeed, I was able to complete the game between meetings while working from home.  That was thirty minutes.

The only real obstacle to completing the game is the final boss.  This fella took a little working out and did initially seem to be quite the challenge however once I worked out his patterns, he was easy work.  The only delay to killing him was the way the controls occasionally don’t play nice with ladders which are a big part of that final level.  I ended up switching from the left analog stick to the d-pad so that I could get some clean direction changes.  But that is the most minor of niggles. 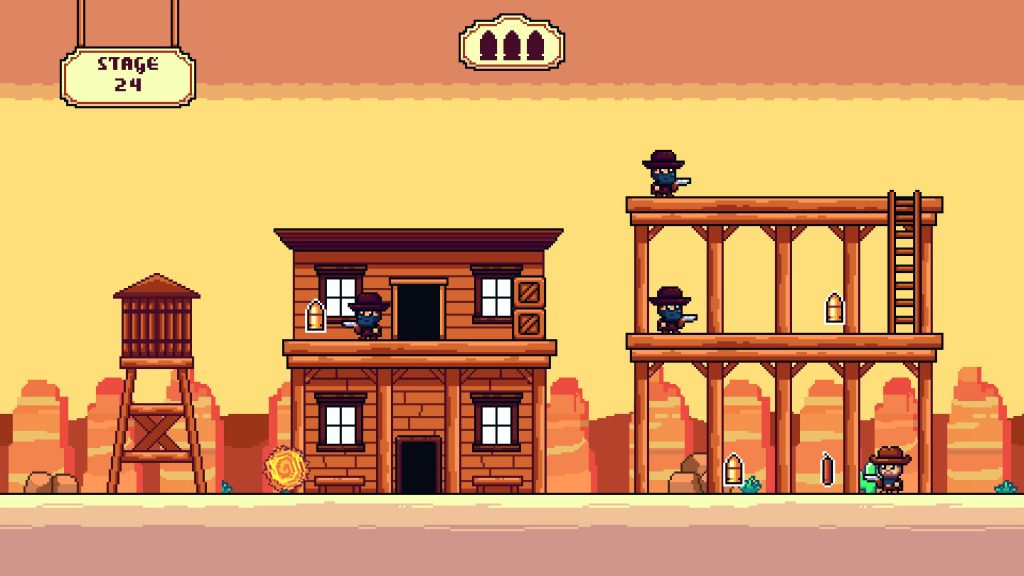 Overall the game was a fun, little diversion.  The thirty minute lifespan really is a little bit too brief even for us.  We don’t mind a quick and whorish Platinum but that’s pretty ridiculous.  Unlike other Ratalaika games, you do have to finish this one to get all the trophies but we’d have liked to have seen a few more levels, especially as the ones on offer really didn’t require us to think all that hard about the solutions.

In terms of the game’s presentation, as you can see from the screenshots, it keeps things pretty basic.  The look is cute but 2D pixel art has definitely been overused by now.  It’s okay but there’s zero variation in terms of environments, characters and even colour.  The sound is also similarly samey, although we do like a bit of a dark, country twang so we quite liked the music. 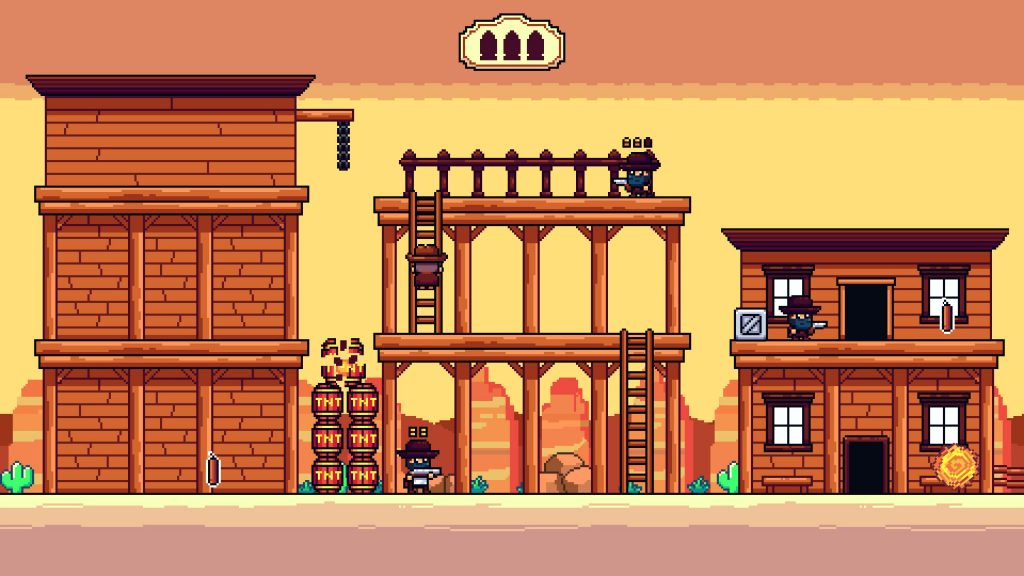 As such, there’s not a huge amount we can say about Virtuous Western.  With just one short campaign, no multiplayer, basic presentation and very low levels of difficulty, this is more of a distraction than a fully-fledged game.  That said, it just works and it is mildly enjoyable.  The final boss was a bit of a prick initially like we said, but we actually enjoyed the fact that this one level put up a little resistance.

As ever, the likely audience for this game will be those of you looking to bump up your trophy haul.  If you have a PS4 and PS5, you’ll be two Platinums richer after just an hour and four less than £4 you can’t argue with that (although the PS5 version is identical, visually and in terms of gameplay, to the PS4 version) but if you’re looking for something more thoughtful and substantial, then this is one to avoid.

Virtuous Western
4 Overall
Pros
+ Quick to pick up
+ Some of the levels require a bit of thought
- Caters well to trophy hunters
Cons
- Far too easy and short
- Very basic presentation
Summary
Virtuous Western is a (very) cheap and cheerful puzzle game dressed up as a retro Wild West shooter. It has its moments but you're looking at a thirty minute game here with a pretty trivial level of difficulty and as such you'll be done with this before you know it.