I do love a good souls-like but there is a sense that taking them into the second dimension can limit combat and exploration. There’s no shortage of triers and Third Sphere Game Studios are the latest to give the stripped down experience a shot. Released on steam in January, a console port of Watcher Chronicles has found its way to the Playstation 5. What’s arrived is a deceptively large game that executes well, even if the inspiration if firmly branded on its sleeve. 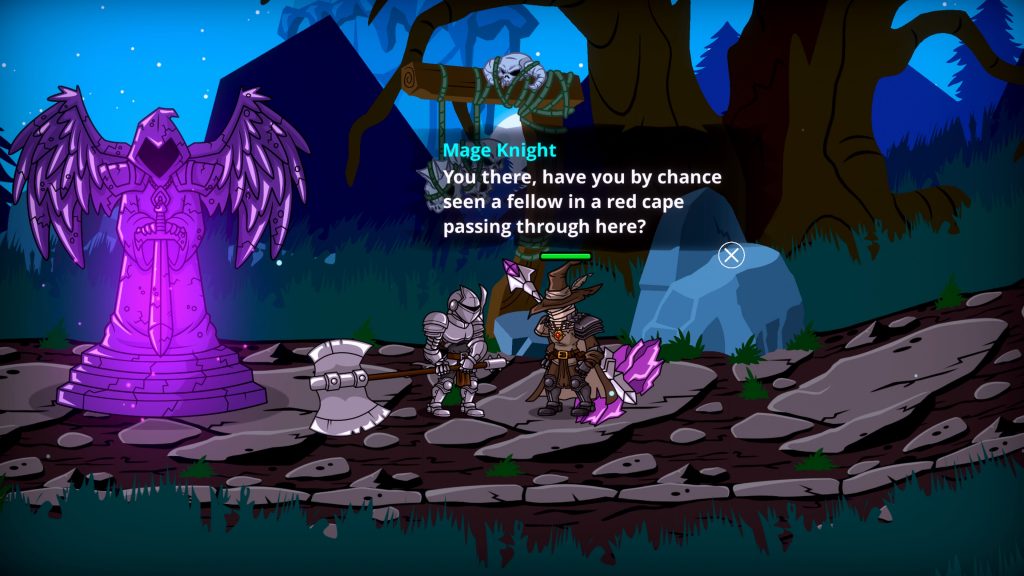 Indeed, the story takes a standard trope of the souls series with four Watchers needing to be slain to put the world to rights. There’s not a lot of time given for world building. You encounter characters with their own missions but their dialogue is limited to a line or two. There’s no real lore to speak of and there is just the one job to do. There is a late-game turn but, without any real context, it doesn’t feel earned. There’s not much story to invest in and, as such, I can just slash my way through the catacombs without any real narrative consequence. There are good and bad endings but they only really pivot on a couple of events. It’s a premise rather than a complete tale.

Combat transitions the traditional souls-like combat to two dimensions pretty well. It’s been done well before with games like Death’s Gambit and Salt & Sanctuary and Watcher Chronicles doesn’t do much to alter that blueprint. It is perhaps a little more reactionary. Animations are quicker so there’s less of a priority on timings. You do, of course, have a stamina bar to govern all your actions but the game does a good job of explicitly telling you when you’re out of juice. 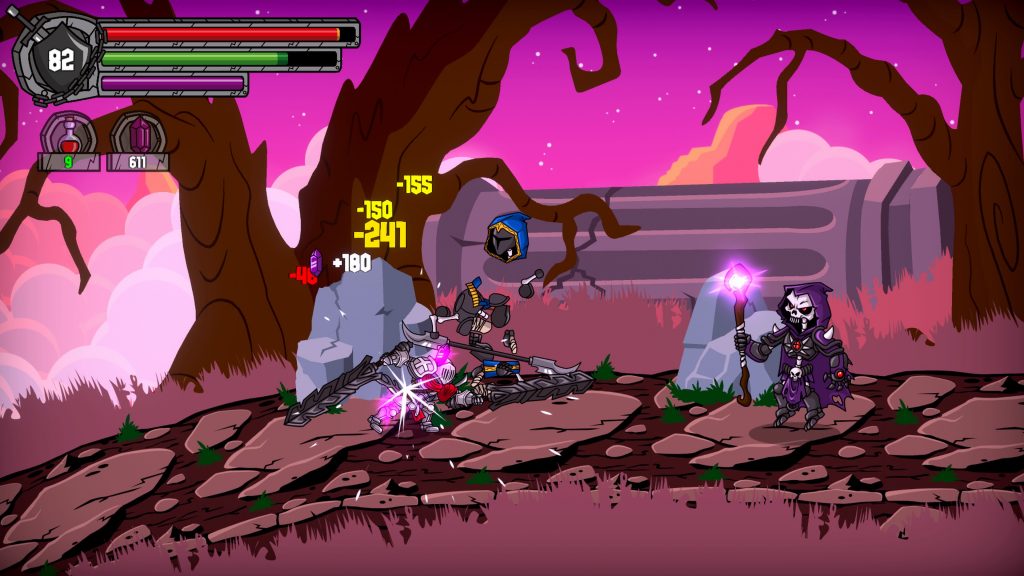 You have a standard strike in combat that can be hit multiple times for combos. I don’t see any heavy strikes but there is secondary damage numbers for each weapon. It’s entirely possible I’m overlooking it. The left shoulder button readies your guard with weapons providing as much coverage as a shield would. It won’t keep you guarded in perpetuity which does give blocking an element of timing and skill. Get it perfect and you’ll perform a parry. It’s satisfying to trigger an enemy into a wide open state and the telltale pause leaves you in no doubt when you’ve nailed it.

Rolling can have the same effect and sometimes I prefer to roll out of danger. Not everything can be blocked and there’s always a stamina penalty for playing that defensively. Ranged combat can be accomplished with bows. It’s mainly supplemental to your main weaponry and my strength build didn’t really allow for much use. I don’t think you can turn range into a viable damage dealer. Magic fares better and it’s unlocked early enough to allow players to pivot their build quickly. The magic runs the usual gamut of elemental effects and adds viability to ranged combat.

There’s enough variety in the weapons to give players plenty of options but the stats screen is very light. It’s simplified to just strength, health, stamina and magic. It cuts down any potential choice paralysis and makes every point seem useful. Each area has a recommended level which helped me plot a course through the game. Each of these areas have their own motifs with some unique enemies. There’s a nice sense of progression through the world and the platforming elements do give the areas a sense of verticality.  The map is excellent at letting you keep track of unopened chests and untracked ground. 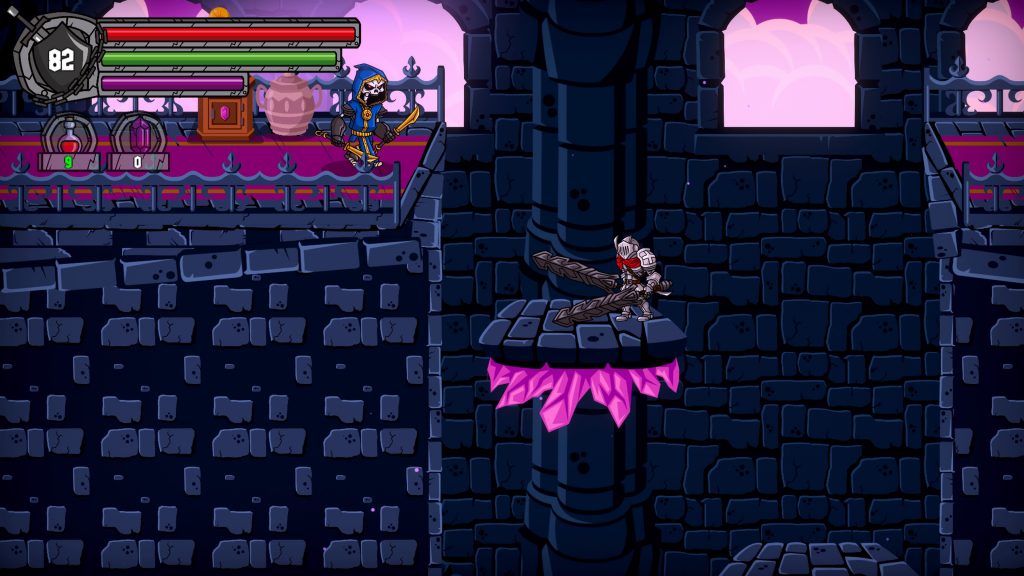 The jumping feels solid although lifts can definitely give you a mad boost in elevation. It doesn’t feel intentional but there’s one point where the developers play with it. It also gives them a chance to place enemies in precarious positions. This can be infuriating as you cross a ledge only for an enemy to immediately knock you off to your death. Encounters are mostly fair but Watcher Chronicles really likes to lock you in against mobs. These set-pieces are mostly a way to display co-op but they can feel like gauntlets. The final push features one of these that can outstay its welcome. Co-op itself is limited to local only but, if you have friends over, the extra pair of hands can be very welcome. AI characters also join the fray which can make for some frantic battles.

Bosses are well designed with a bit of variety across the twenty plus demons you’ll look to slay. Arenas are usually large enough but the bosses have a speed to them that makes distance easy to close. They keep the pressure on, sometimes to the point of exhaustion. I didn’t find many of these fights troublesome but a couple did try my patience. At times it can feel like they’re relentless and finding opportunities to heal or deal damage hard to come by. Watcher Chronicles is occasionally punishing but I found success to be rewarding and the challenge seemed to scale with my level evenly.

The presentation isn’t much to write home about. Visually, there’s a sharp, colourful look that seems to favour jagged edges. It can look atmospheric but the art style just doesn’t chime with me.  Background elements don’t muddy the playing field much which makes platforming sections easy to spot. There’s a diverse palette for the many areas and the enemy design remains fairly strong, even if there are plenty of repeats. Defeated foes shatter into pieces and spill goodies and damage numbers show just how hard you’re hitting. It presents information pretty well. 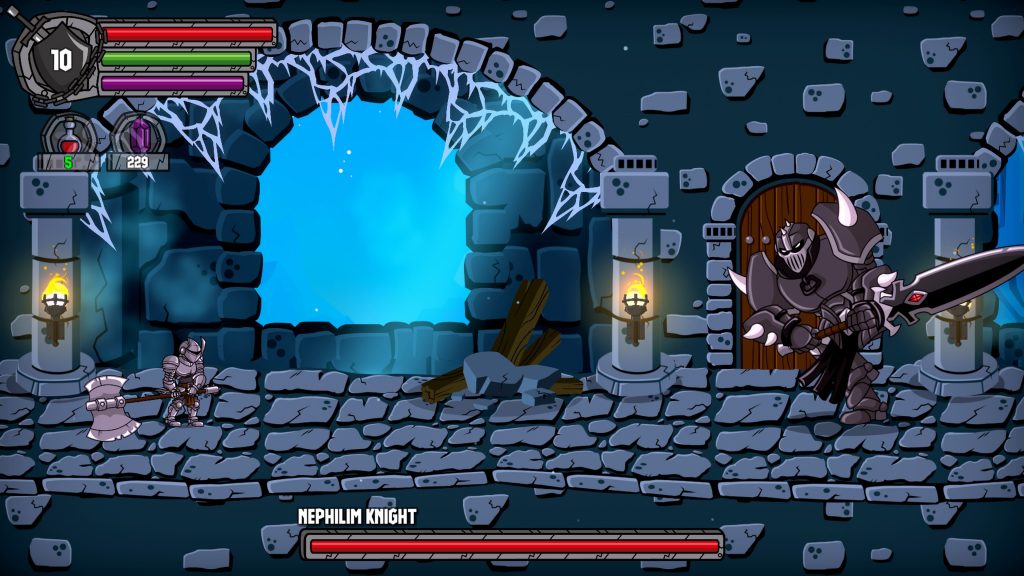 The music is also fine but doesn’t really do a lot to distinguish itself. Bosses carry the same theme and the enemy grunts all kind of mesh together. The magic effects, particularly in those mob encounters can result in busy viewing. I’ve definitely lost track of myself in those situations.  Boss fights do encompass a ominous pause before proceedings really kick off.  There’s a zoom that takes place that kind of warns of the impending danger.  It’s a nice tell that can imply a point of no return.  There might even be an opportunity to grab your loot and leave before the drama really starts.

Watcher Chronicles is a hefty package that feature swift, skill-based combat. It does feel derivative but the execution on display does result in something good to play. The world feels vast with some gloomy atmosphere portrayed through some, admittedly ordinary visuals. Feedback is conveyed well and I did enjoy how the challenge remained consistent throughout. I don’t think it does much to stray from the inspiration but the little changes they did make made for a more streamlined experience.

Watcher Chronicles
7 Overall
Pros
+ Fun, reactive combat.
+ Some quality of live changes that are available very early.
+ Deceptively large with plenty of areas to explore.
+ Consistently challenging.
Cons
- Not a fan of the art style.
- Some of the hoard encounters can outstay their welcome.
- Later boss fights become very busy visually.
- Enemy placements can really impede platforming sections.
Summary
Watcher Chronicles is a fairly solid souls clone with a deceptively large world to battle. Story is thin and presentation can be ordinary but the reactive combat is enjoyable to engage with. Some encounters can be busy and not all the bosses are winners but there's a decent core that kept me entertained. As punishing as it can be, the reward and constant challenge kept me focused and the exploration is aided by reliable platforming. Whilst it doesn't do a lot to separate itself from its contemporaries, the execution is sound.