Most of the classic arcade shoot ’em ups have been ported time and time again to home systems over the last few decades. Certainly all of the classics such as Gradius, R-Type, 1942 and so on but also the elite examples of the genre (usually anything by Cave), they’ve been making appearances now on consoles for years.

Two games that never made it over to consoles were Vasara and Vasara 2. Two credible but lesser known efforts from Visco Corporation (previously a subsidiary of Taito). These games were relatively unknown outside of the hardcore shoot ’em up community having arrived in 2000 and 2001 in Japanese arcades, long after the golden age of arcade gaming.

I’m not going to claim to be any kind of authority on the subject, having probably played each one once on MAME at some point at the very most but both the games have been bundled together, along with a brand new reinvisioning of the series, in VASARA Collection. An obscure choice but one that will no doubt delight the hardcore fans of the genre. 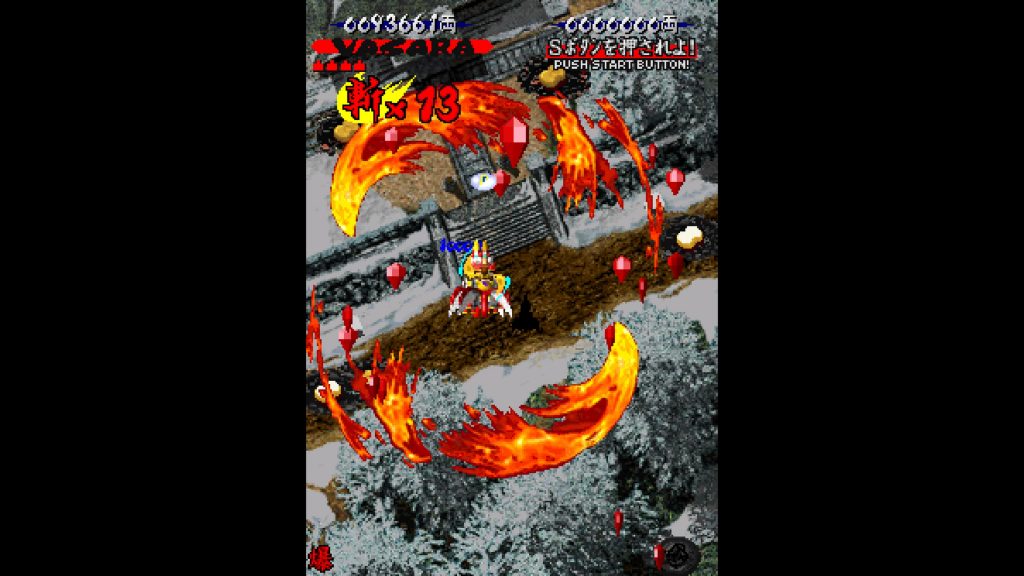 The Vasara games are vertically scrolling shoot ’em ups set in an alternative feudal Japan where people have modern day weaponry to go along with their swords and spears. The main meat and potatoes of the games are exactly what you expect. You fly ever upwards, shooting enemies, dodging ridiculous amounts of firepower and eventually facing off against a boss that takes a lot of damage and dishes out even more. Each game has six stages (although Vasara 2 has a harder mode that extends this to 12).

As with any shoot ’em up, the devil is in the details and the quirks of the control setup. You have four main attacks. Your basic fire button which shoots as you tap, a rapid fire option that sends out a steady stream of firepower, a special ‘Vasara’ attack which is charged up by picking up the gems that defeated enemies drop and a screen clearing smart bomb. 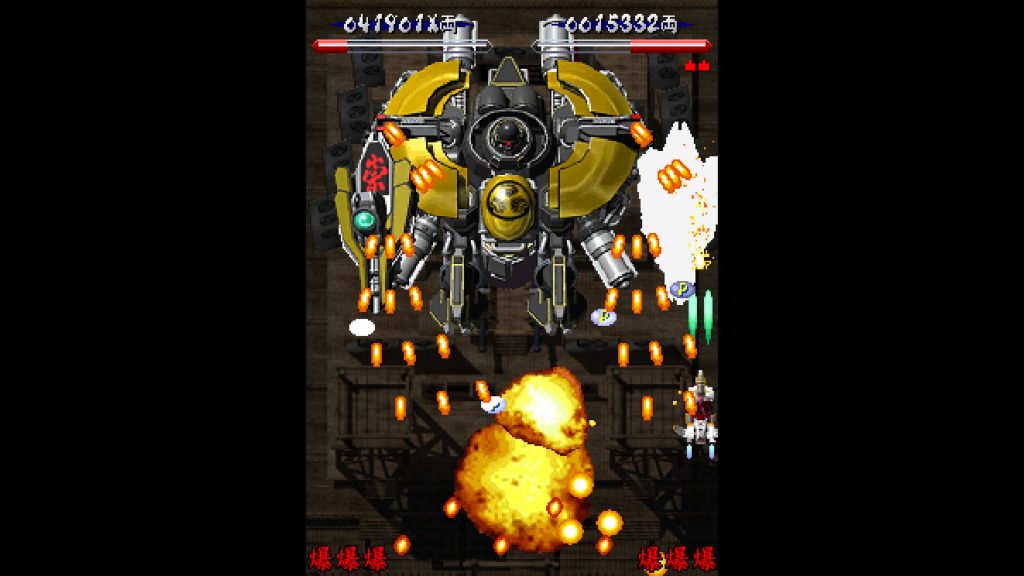 Vasara’s twist is in that first attack, the basic fire button. If you charge this for a second and release, you’ll pull off a melee attack which deals higher damage and also deflects any bullets that are near you. This is essential to both big scores and your survivability but that second of charging does make you vulnerable and your melee range is pretty small which means the screen can fill up with plasma death, all pointed at you, making that charged up attack suddenly feel very inadequate.

Another interesting wrinkle to the games are that only firepower kills you.  Hitting an enemy physically just shunts you across a few pixels, but does no damage.  That said, there’s often a bullet there that you won’t want to get too close to. 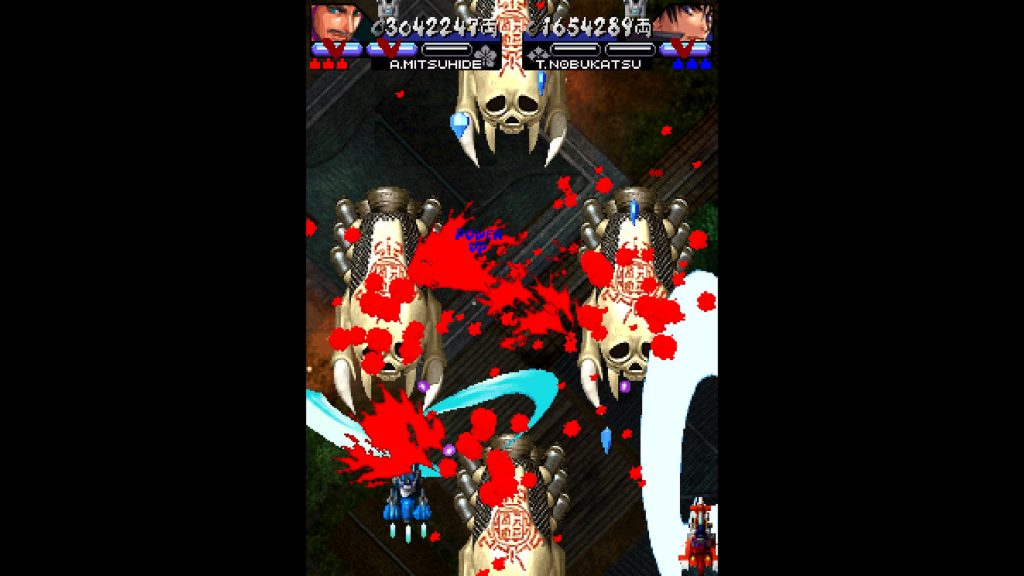 Each game gives you a choice of characters to play as, each one offering different levels of speed and firepower, but you’ll soon find that both games are uncompromisingly difficult. While it probably qualifies as ‘bullet hell’ there are less patterns to read and navigate and really just more attacks than you might be used to. Using your melee attack is sometimes your only route to safety but far from a get out of jail free card, especially as it renders you helpless for the second or so that it takes to charge.

The controls are slick and comfortable, so they can’t be blamed (although we did favour the left analog stick over the d-pad), but you will be getting regularly shot out of the sky for a long time before you ever get good at the game. The games do offer a lower, and indeed higher, level of difficulty as well as the choice of increasing your lives and bomb stock but by the end of each game, the challenge is significant. 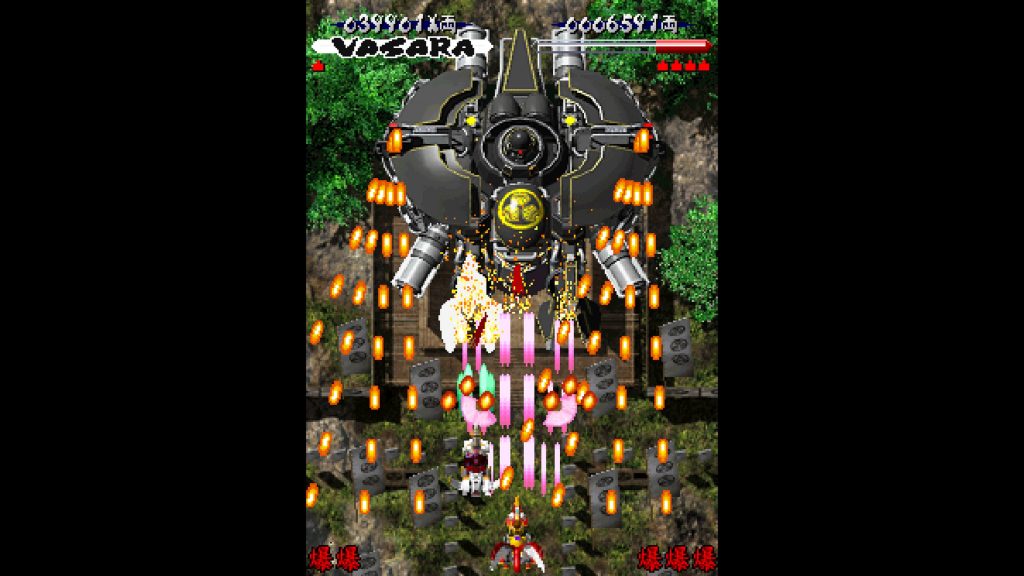 to add one) and lets you continue from where you die, except for on the final level of each title. Die there and you go back to the start of the stage, which has meant that we’ve not been able to beat either game solo as the end bosses on each are pricks and the battle to get to them is no joke. And that’s on easy with maximum lives and bombs. If you’re not carrying around some educated thumbs, you may want to consider your purchase here (or try the games out via emulation first).  Thankfully the games both support local co-op and while that may be a hindrance visually, as long as one of you is alive, you’ll get to keep continuing when you die.

As such the fun on offer here might directly correlate to your skill and that’s fine. This is that type of genre to be fair. Just don’t go expecting an easy ride from either game. As such, we feel a little bit under-qualified to give a completely fair assessment of the original coin-ops but they do everything we expect of a good shoot ’em up and have enough sophistication and action to qualify them as good examples of the genre. 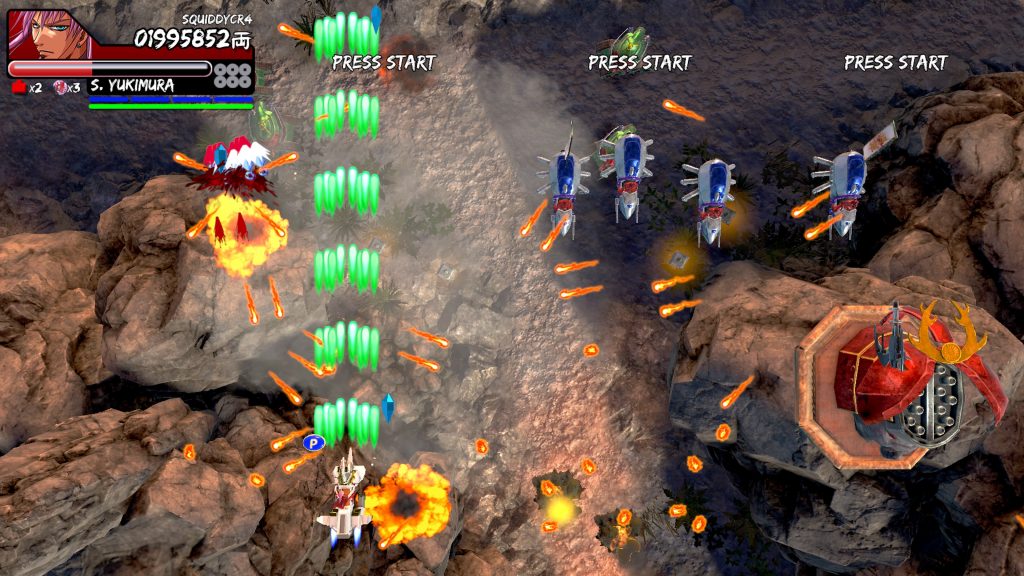 Both games are well presented with classic early ’00s shoot ’em up styling. Incoming attacks are visually clear and the designs of the enemies, both small enemies and bosses alike, are well-realised. The game offers two filters, sharp and smooth, but we would have liked a scanlines option and maybe some choices of bezel art.  That said, the backdrops are lacking in any real character or variation and so everything looks a little staid for our tastes.

Gamers looking for a more modern take on the genre are catered for with Vasara Timeless which is a brand new title that presents the action in widescreen (albeit still vertically scrolling) and offers updated polygonal graphics and lets you play with any starting character from the previous two games.  It also supports four players in local co-op.  This is nice but you might find yourselves bumping into each other and bouncing off into bullets.  That was our experience with two players.  Four will be madness and, again, the usual caveat applies here. Can you get three gamers to come over and, if you can, can you really convince them to play a very obscure shoot ’em up? 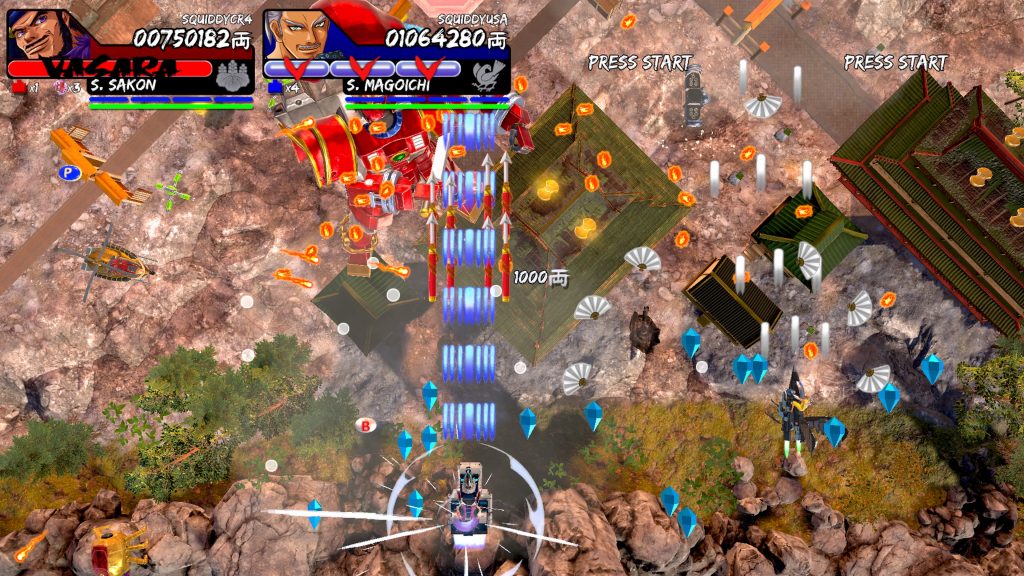 This mode is a lot more gentle with you initially with enemy attacks being slower and less frequent than in the coin-op titles but it does ramp up eventually as you’d expect.  The shoot ’em up genre doesn’t feel like one that has improved since its golden age and that’s apparent here. While the visuals and gameplay are adequate in Vasara Timeless, they are nothing special and indeed this is made worse by the fact that the levels are randomly generated and so there are no dynamics to the game, no big moments, no set pieces. Indeed even the backgrounds all feel pretty ordinary. I can only really remember flying over rocks, grass, water or hills. It’s a bit like the old Namco shoot ’em up Xevious in that it is doing enough to be a shoot ’em up but it never tries to wow you.

Also, this mode doesn’t support continues at all and so getting through it is going to be a real challenge for most gamers. We got to the end of stage three and that was after playing like we were Chuck Yaeger for the first two stages. Getting to the end of the game feels like something that will need either a lot of skill or for you to rope in some co-op buddies.

It does feel like the game is designed for that co-op help and without it, the odds really are stacked against you. Personally speaking, the game was a bit much for me. We’ve played a lot of shoot ’em ups and have generally always done quite well at them but Vasara seems to be a little more devilish than most and so really this is a game that improves if you have someone to play with.  However, it’s a welcome release that will certainly delight fans of the genre but while we’ve kind of enjoyed exploring these little-known shoot ’em ups, they aren’t going to displace the likes of DoDonPachi from our favourite shoot ’em ups list.

VASARA Collection
7 Overall
Pros
+ Three games
+ Solid arcade shoot 'em ups
+ Local co-op
+ The games have real rarity value
Cons
- Arguably too hard
- Visually bland
- Timeless mode is procedurally generated and a little uninteresting
Summary
As a museum piece, VASARA Collection is a really interesting release and one that is a real treat for shoot 'em up fans. However, a lot of people will find it repetitive, visually uninspiring and too hard without local co-op buddies to play with.