Upon starting up Gravity Duck from developer Woblyware by way of publisher Ratalaika, we were immediately struck by how familiar the menus looked. Essentially identical to another game we previously reviewed from the same developer in League of Evil.

Thankfully the similarities end there as this is much more like another Ratalaika release we reviewed a matter of weeks ago in Hoggy2. That also had a gravity altering mechanic and a cute main protagonist. Only that had more fruit and moon robot pricks.

In this case, for reasons we’re not entirely sure of, our cute yellow duck has magical powers that allows them to jump from one parallel plane to another. 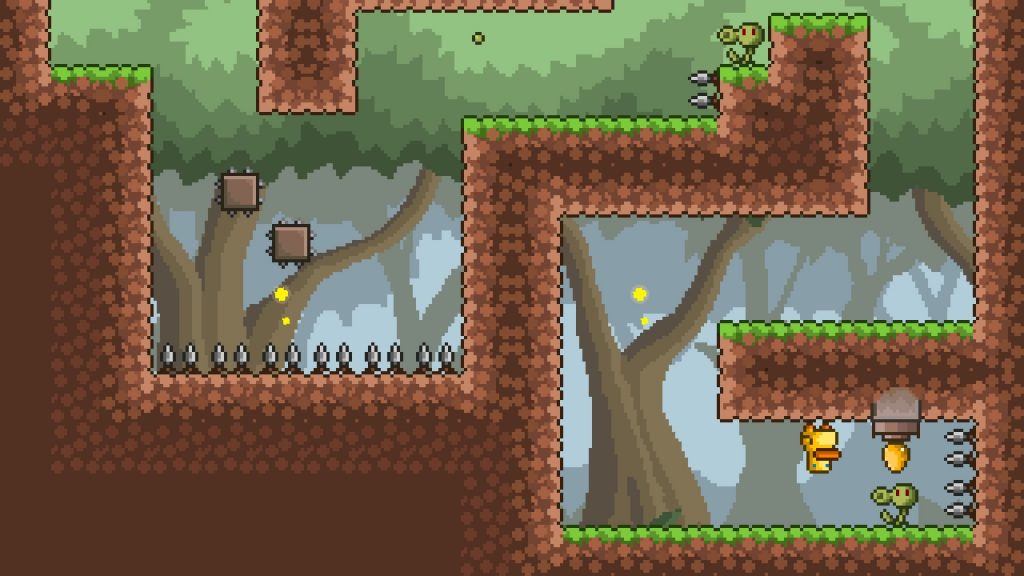 It has something to do with a moa stone statue that tells you to collect golden eggs across levels of varying complexity.  We quote ‘”bring me all the golden eggs and I will make you rich!” As to what riches a duck could wish for, we’re not clear. There’s  thinly veiled threat there as he bids you adieu with “do not fail me, go!”

Perhaps if you fail you will  have to make do with the pastoral life of a normal duck. Or maybe served up nice and crispy with hoisin sauce and pancakes. Mmm, pancakes. In our head the moa statue talks like those in our favourite DS game Rhythm Paradise (pick it up, typically £2 in CEX). 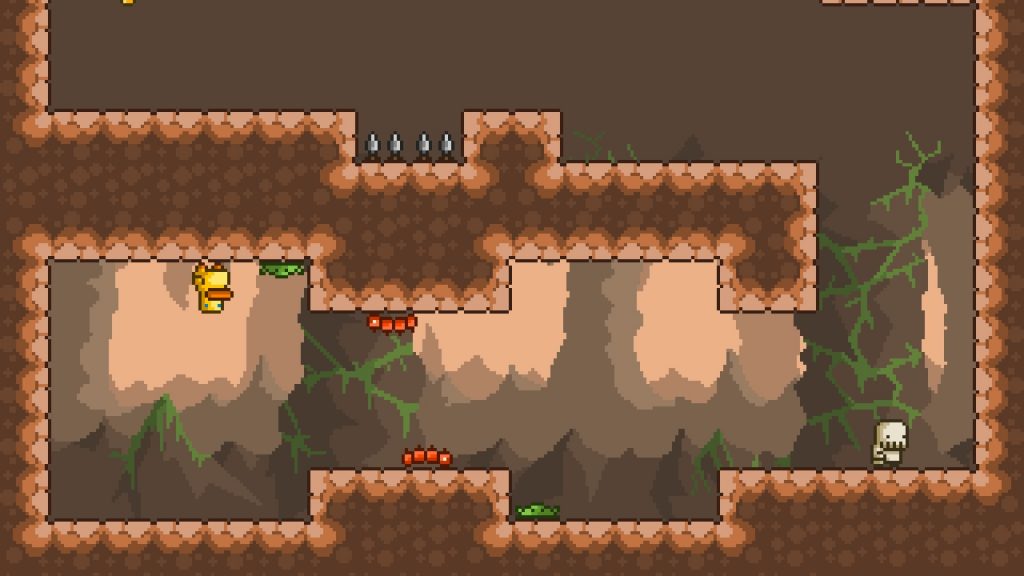 Either way, what we have here is a death gauntlet explore-em-up that proves oddly compulsive and fun to play. You can change your direction of travel from north/south to east/west by jumping into a so-called gravity well. It’s a convenient device to explain away the mechanic anyway. You’ll need to avoid spikes and various enemies out to get you as you jump around.

First you’ll encounter the fairly benign caterpillar who simply patrol back and forth. Then the butterfly who acts as an unerringly accurate turret, leading to your needing to time your traversal perfect to avoid their fire. Next up is the shooting plant whose resemblance to the pea shooter in Plants Vs Zombies must surely be entirely coincidental. In a higher profile title, we expect Zynga’s lawyers might take notice.

The final trophy relating to a specific enemy is unlocked when you first encounter the bat. They chase you down and can prove troublesome if you aren’t quick enough to go past them. If you get out of range they’ll cease their pursuit. Subsequent enemies are the goat (aggressive and fast), caveman (dumb and patrolling), eagle (pooping) and  tribesman (spear throwing). They all fit the tone of their associated levels pretty well. 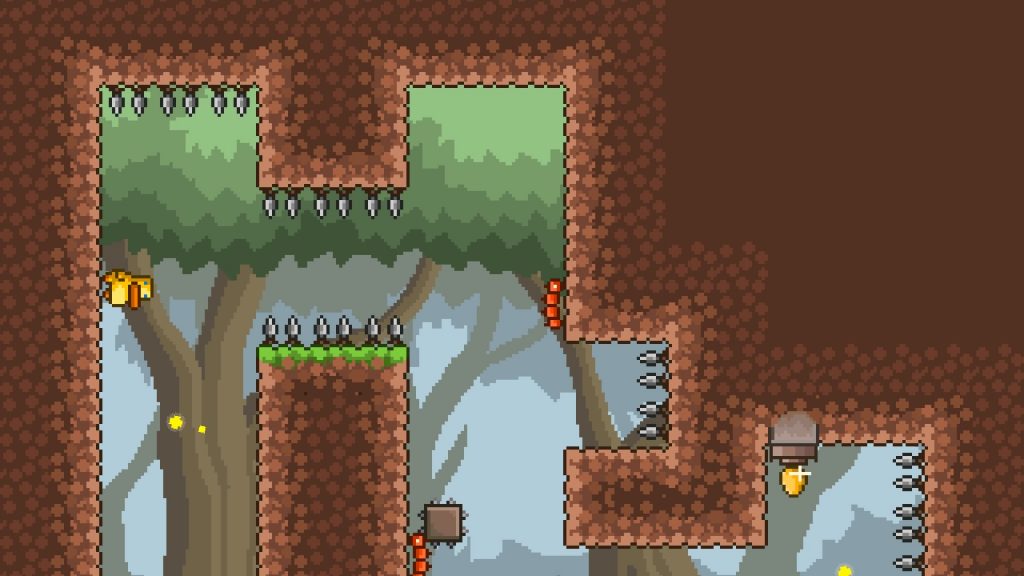 Besides the ever present spikes, which change into futuristic spikes in the city levels, there are a variety of obstacles to impale and kill yourself on. There’s spinning death arms, flame barriers, laser barriers, moving death traps and many more. All the hits. Some feel a little familiar, no doubt sharing some of the same assets as League of Evil, but you can hardly blame the devs for that on no doubt limited resources.

Music is gentle synth style that isn’t too obtrusive, also sound effects aren’t what you’ll remember this for, similarly generic.

Rapid changes from one plane to another can lead to disorientation, a few occasions we died due to losing our bearings. A  little confusing, it pays to gather your thoughts sometimes before rushing onward. 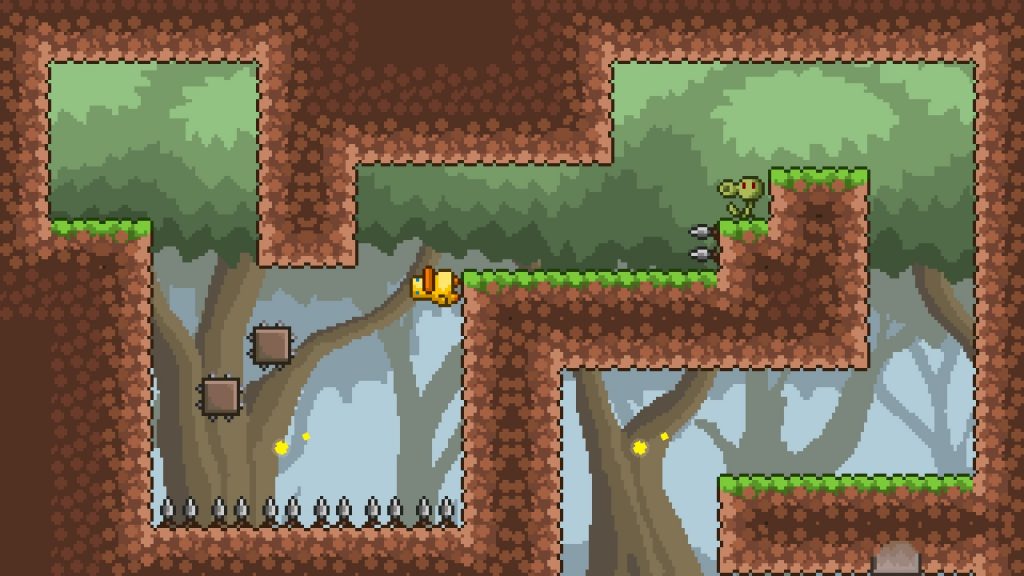 As is generally the case with Ratalaika cross-buy games, Gravity Duck is just as good on Vita and fun to play long after the last trophy has popped.  Across four themed worlds (forest, underground, mountains and city) and 150 levels, there’s plenty on offer here. We got a platinum on PS4 in just over an hour and a record fast platinum time of merely twenty six minutes on Vita. Admittedly our familiarity with our physics defying pond dweller may have helped, but the record still stands.

Despite that, the trophies feel alright, though perhaps tying some into later levels might ensure people carry on beyond the second set of levels, given that’s the point the fiftieth golden egg and hence the final trophy unlocks. It’s only the short nature of the levels that leads to such a quick platinum in this instance.

All in then, Gravity Duck is a quick double platinum that rewards playing beyond the point at which you’ll get your swift final trophy. Great value being on both PS4 and Vita.

Gravity Duck
7 Overall
Pros
+ Short and sweet double platinum if you have Vita too
+ Fun gameplay with cute design
+ What the world needs now, is ducks, sweet ducks
Cons
- Trophies are all unlocked just a third of the way in
- Can be a little disorienting flipping from wall to wall
- Audio is underwhelming and you could easily play without sound
Summary
Another speedy yet charming double platinum trophy haul from Ratalaika. It's a phrase we're in danger of overusing, but better than a one and done.