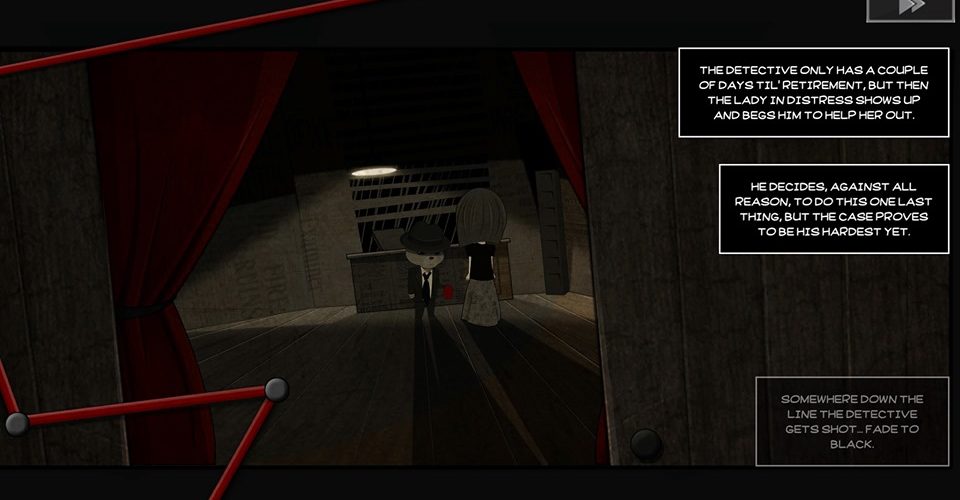 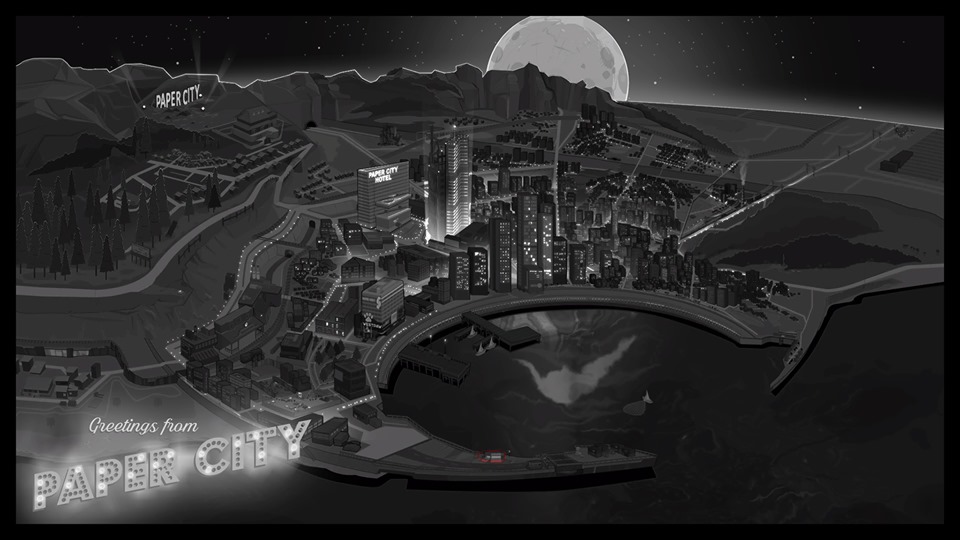 As point and click adventures go, there are very few that can live up to the heyday of the Lucasarts adventure legacy. Titles like Monkey Island, Grim Fandango and Indiana Jones: Fate of Atlantis are all shining examples of how to do the genre right, while also being the benchmark in which many points and click titles were generated. While the genre has subsided in popularity over the past few decades, these are still remembered fondly and are influencing games to this day, for example, the recent Telltale Sam and Max releases continued the tradition of point and click humour, while others such as Armikrog have come along and borrowed a thing or two to mixed results.

Bear With Me is the latest game that borrows heavily from the roadmap that Lucasarts set out all those years ago. Coming from Croatian development team Exordium Games, this title sees young girl Amber Ashford, team up with her gravelly voiced teddy bear named Ted E. Bear (who saw that coming?) as they try to solve the mystery of a strange red cloaked man who is setting fires and attacking the inhabitants of the rain-drenched streets of Paper City. 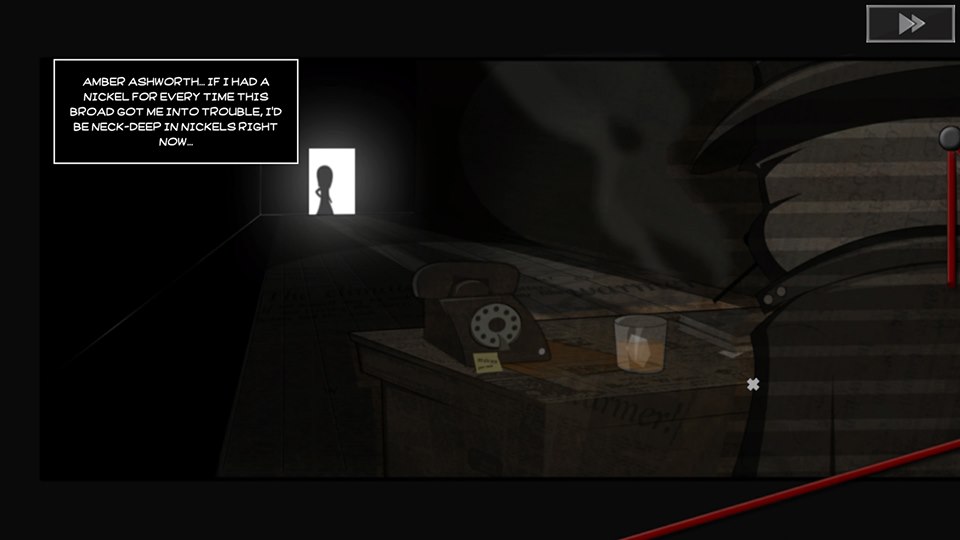 The perspective is an interesting one. There is a notably surreal and dark tone to the game. The story is set out as a film noir in approach yet tackled from the viewpoint of a ten-year-old girl and her projected imagination. Everything from the dialogue to the locations and characterisations fit quite well into the idea of being conjured by a young girl who has spent an awful lot of time reading detective fiction and sat in front of the TV. Each character met in Bear With Me is an animal of some kind, essentially the personification of the various plush toys and dolls that Amber has hiding in her attic. It’s an interesting take and one that holds water if you can align yourself to the developers thinking and gets more interesting as the story progresses as the world around Amber and Ted becomes more real, as if Amber is getting deeper into the detective fantasy as she goes.

For the most part, the story and characterisation is superb. However, this is mainly subject to the background characters and world for me. The main characters of Ted and Amber can be a mixed bag in terms of how they are portrayed and the dialogue between them. The most jarring aspect, particularly in the first episode is how hammy the voice acting can be. Amber is played confident and almost too childishly at times, while Ted is a textbook case of watching the Maltese Falcon, doing an impression and thinking that’ll do. Ted’s gravelly, sharp drawl does work at times, but there are times when the dialogue feels phoned in. Especially when you have heard the word ‘Doll’ for the fiftieth time in the same episode and it always comes followed by a jarring pause, as if the word was randomly inserted so that you are reminded that Ted is a downbeat private eye. 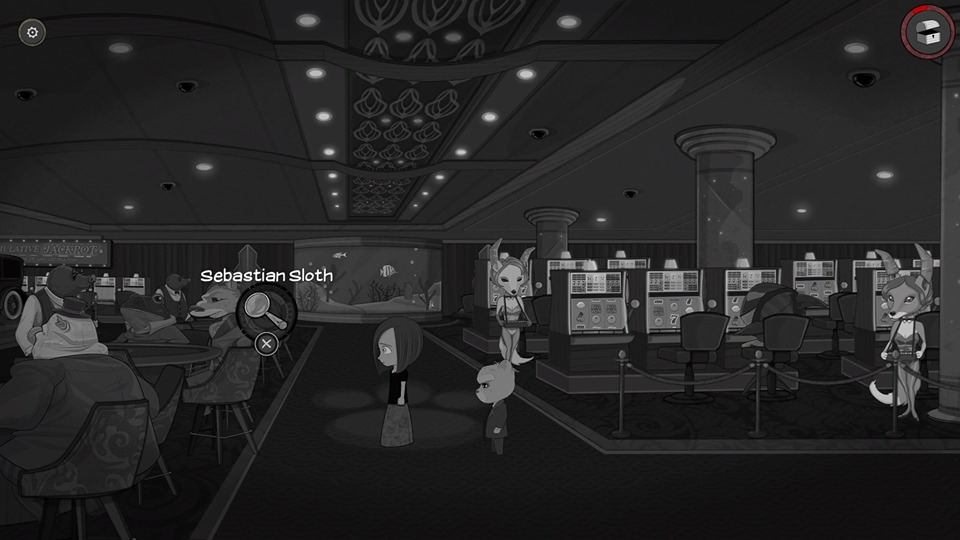 The dialogue and voice acting are also jarring in the sense that while the game is supposed to offer a dark narrative and provide some intrigue. There is also a lot of humour peppered into the game. This is for the better and worse as there are some jokes that work with this type of performance and many that don’t. The latter is made known in a lot of the references that are made throughout the episodes. Exordium Games has liberally dusted the title with homages and tributes to TV, games and otherwise in each room of the game. Whether it be nods to Nintendo Piranha Plants, Metroids, Indiana Jones theme whistling and even the “YEAH” meme from CSI. Hell, there is even a puzzle that borrows from the final scene of the Fifth Element. These homages can feel a bit jarring and juxtapose some of the ideas of intrigue in that Family Guy kind of way. But, one thing I will say, is that it is somewhat appropriate that considering the game is based inside the mind of a child it could be a narrative of influential media tainting things for Paper city, so there’s that.

For the story and mystery, this is where things improve. Over the three-episode arc, the story of Amber, Ted and the Red man plays out as a slow, yet progressively interesting campaign, where there is just enough intrigue to keep you wanting to click through and continue playing. It’s odd though, on the way through you can see where the developers have gotten better at crafting the adventure, dialogue and world as it gets better as you, *ahem* bear with it. Episode One feels almost painfully slow and dull in comparison to episode two, and the third is the best by far as everything culminates. There is also a fourth episode that is standalone and acts as a prequel to the main story, which feels a bit more of the same, but rounds off the package nicely if you find yourself wanting more from the short adventure. To go too far into the story and a synopsise the episodes would be a bit of a spoiler, so I will avoid this here in the review, as the game is worth trying out for that. 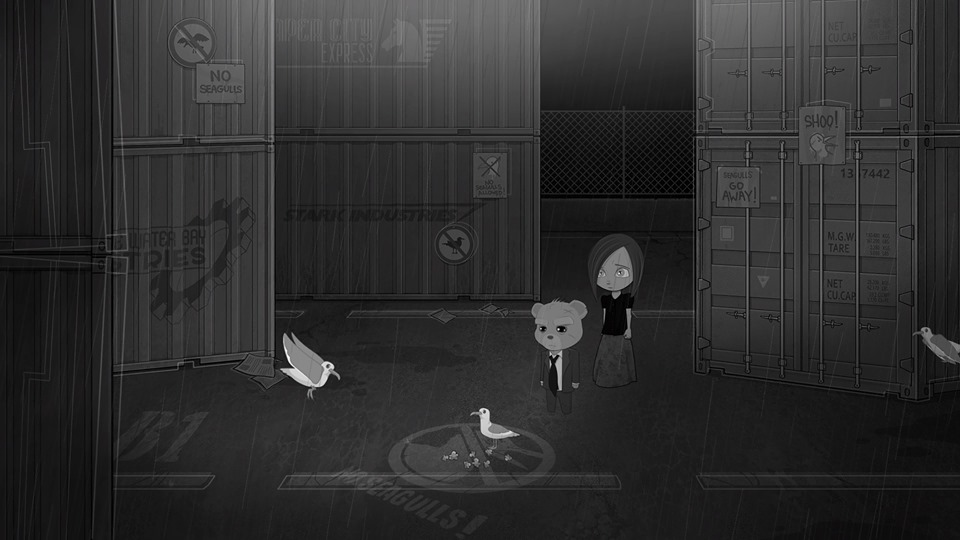 This is your typical point and click affair. If you have played any of the aforementioned Lucasarts classics, then you know exactly what to expect. The only difference being that overall, the game feels a bit too slow for my liking. Everyone moves at walking pace which can be tiresome during larger background scenes. The menu system can also do with a bit of work, as it clearly is an interface meant for PC, going into your inventory and dragging the cursor across the screen to place or combine objects can feel like a bit of a chore and can also feel like it is padding out the game length with deliberate sludge. Puzzle solving is similar, it doesn’t really feel all that challenging with only a few minor blips along the path that will have you scratching your head. Chances are though, you have played one of these games before and when in doubt, just rub every item up against one of the stages interactables and you will brute force your way through in no time.

Bear With Me takes a bit of time to get into, but it does culminate into a fine point and click title. It may not be to the level of the Lucasarts adventures of time past, but it makes a good go of it. If you can get past the somewhat hammy voice acting and constant jarring references, then you will find a decent adventure with an interesting mystery to solve. One to consider if you are between games and just want a story to wind down with.

Bear With Me: The Complete Collection
7 Overall
Pros
+ When the story remains organic, there are some great characters and a mystery to get stuck into
+ Doesn’t outstay its welcome
+ There are some good jokes in here
+ Well designed locales to explore
Cons
- Over reliant on Family Guy style pop culture references for humour
- The voice acting and dialogue can be downright annoying at times
- Character movement can be painfully slow
Summary
If you like buddy cop point and click adventures, then Bear With Me: The Complete Collection makes for a good palette cleanser. It goes a bit overboard on the film Noir style but makes up for it with genuinely well-designed characterisation and locales that get better as you progress further into the episodes.