A summer of sport brings with it many highlights. A World Cup is well under way, Wimbledon is days old and now the Tour de France is just around the corner. Once again, Cyanide studio are at the helm of the premier cycling tour.  This latest instalment is attempting to satiate relatively starving armchair cyclists. 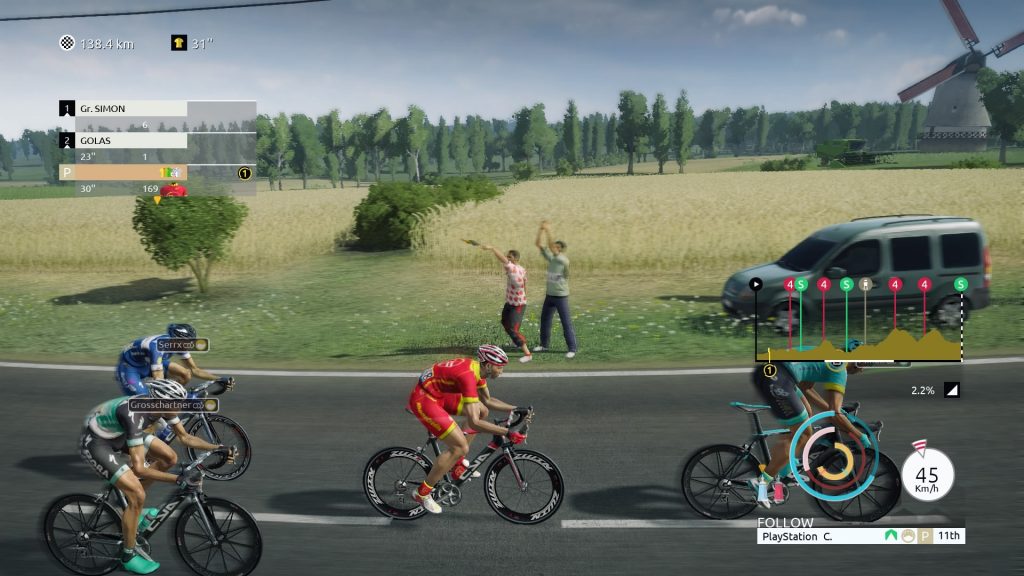 Tour de France 2018 does, for what it’s worth, mirror the sport relatively well. Tour stages feel like genuine tests of patience and endurance. You have to manage your own work-rate, stamina and pick your moments to attack. You have to utilise your team members well and results in a race that can feel very tactical. Knowing when to pick your battles is key to success and, whilst stamina can be restocked with gel, you need to ensure you’re not miles away from a feeding station when stocks run dry.

There’s a lot to take on board. You can follow riders, take direct control of them or issue commands to your teammates via the team communications. The combination of management with direct control can feel a little overwhelming. You might have plenty of time on the course to think about potential actions but, it seems like a product designed for people already well-steeped in the intricacies of the sport. 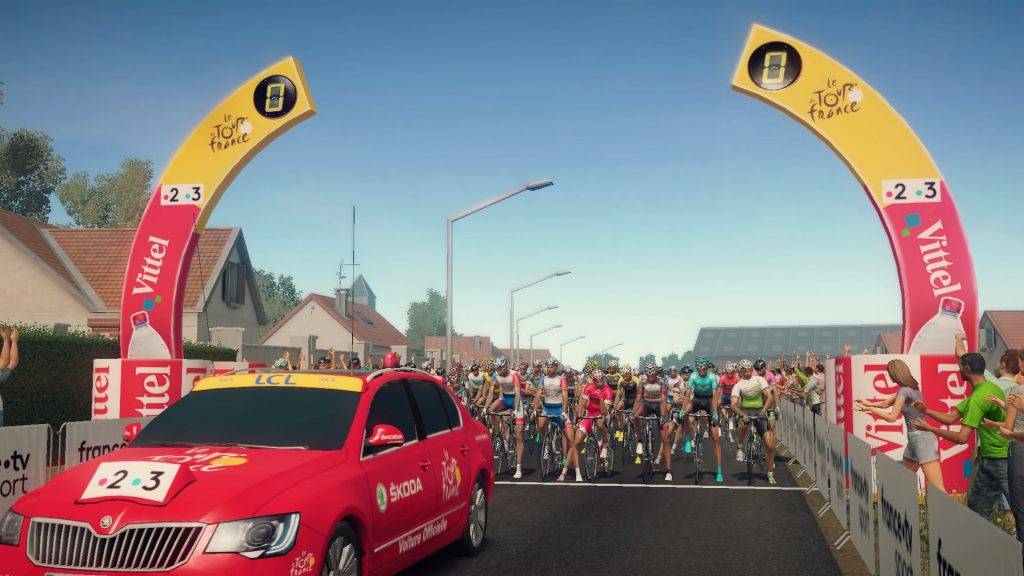 The license is well used with the major teams and every inch of the tour route covered. Chris Froome and the other big names are given decent likenesses although you’ll probably not see much of them under their gear and helmets. If nothing else, Tour de France 2018 strives to be authentic, at the cost of accessibility. What’s surprising is an official product offers a full editing suite for teams and riders. If you wanted to really juice these riders up, you could happily do so. It’s rare to see it so customisable.

Unfortunately, the length of the stages provides one of the biggest hurdles. Newcomers might struggle to deal with the sheer amount of cycling you have ahead of you. Nothing has been condensed or skipped with the entire Tour de France route covered. As a newcomer, it can be really off-putting. Stages can require a whole lot of waiting around and contemplation. Also, from the stages I’ve played, early breakaways are common. They feel almost immediate sometimes with some riders going for it a minute after the start. 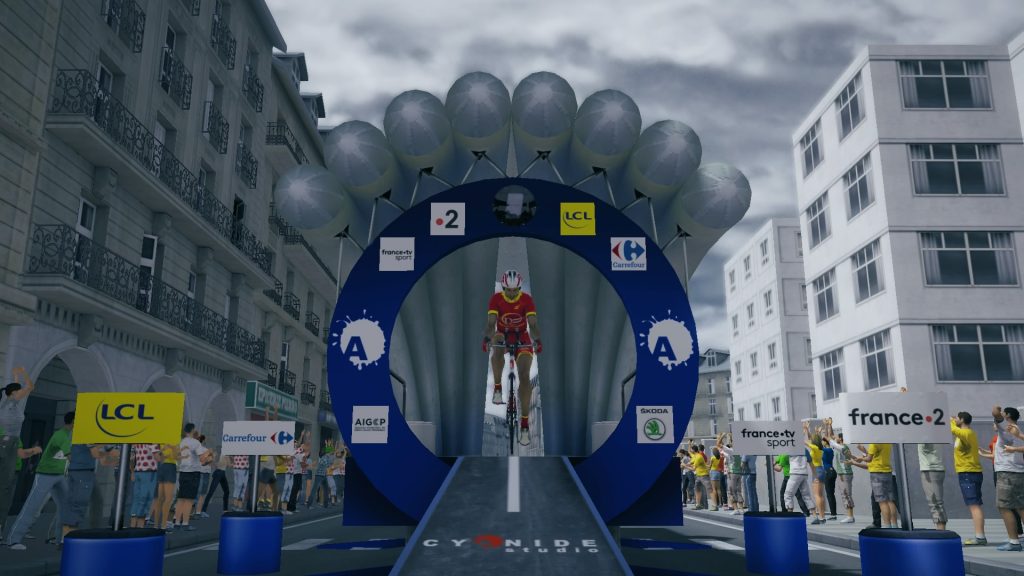 Mode selection seems fairly predictable with you able to take on single tours at your leisure. You can build and manage your own team or, for the more individual glory, you can opt to pursue a career as a team leader. It’s the usual rags to riches story with your early excursions being somewhat cushioned by your modest attributes. It presents an interesting journey but, as with the sport, it’s a long, long road.

You have the option to simulate stage results but then your involvement is non-existent. You also have the opportunity to advance time during stages but then you’re at the whim of the AI. You could be well-placed or completely down and out. A much more condensed, highlighted package might have provided the right encouragement to dive into a full tour. This is such a huge commitment and, whilst you can save mid-race, you’re still left dealing with the length and breadth of France’s grandest cycling event.

Visually, there’s a lot to admire with how detailed the countryside is. It does not look polished by any stretch but the amount of effort to render the tour’s roads and streets is monumental. The scale of the peloton looks impressive,with performance remaining steady. From an audio perspective, your team manager advises you of breakaways or chimes in with details of the opposition’s strengths. It’s chatter that is very helpful but, given the length of each stage, it can begin to feel repetitive. The fans that litter the edge of the course provide plenty of encouragement. 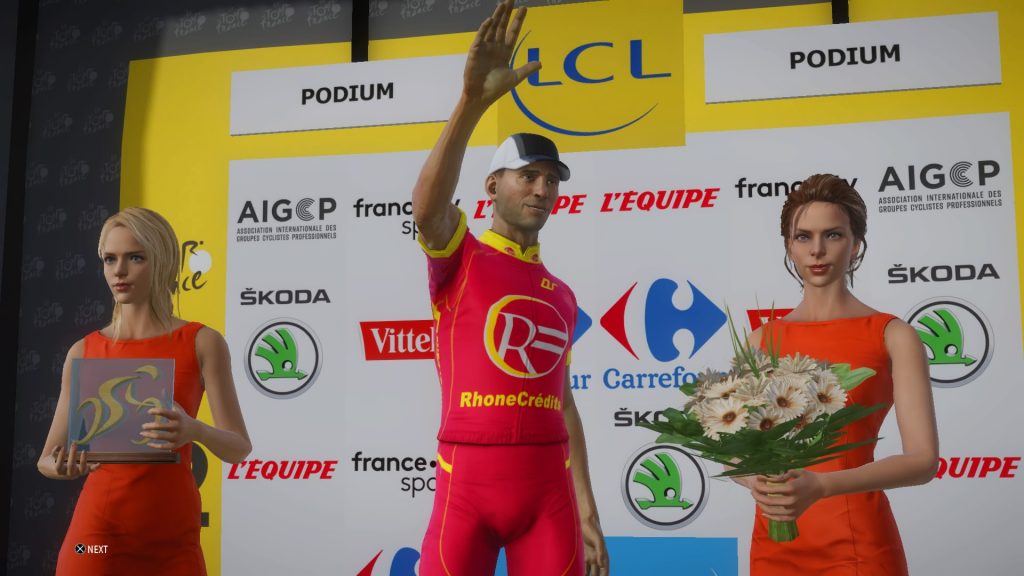 There’s also decisions that frankly baffle me. Feeding on gel brings you to dead stop. For some reason, no cyclist is able to multitask and can only exclusively focus on eating or pedalling. It makes using gel to extend your stamina feel like an almighty risk. You lose so much ground using it, you might as well not bother. You can do this whilst in the protection of the peloton which means any attempt to feed will cause you to lose serious ground.

I wanted to keep an open mind about this but Tour de France 2018 appeals to a very specific crowd. To pick this up you will require patience and a little forgiveness with some of the game’s more bizarre design decisions. These games have never had the most polish and, with little competition, they can afford to rest on their laurels. It’s not an inviting proposition for new faces, though.

Tour de France 2018
5 Overall
Pros
+ Makes good use of the license with the full tour being covered.
+ Plenty of trackside and environmental detail.
+ Your team manager provides plenty of useful chatter.
+ Plenty of content to customise and get into.
Cons
- A very daunting prospect for newcomers.
- Very few options to give the tour a bitesized feel.
- Lacks some visual polish.
- Requires a lot of patience.
Summary
Take this review with a pinch of salt as I'm not a cycling nut. Tour de France 2018 is a game for very specific, patient enthusiasts. The license is used to great effect with every rider, team and stage of the marathon event covered. Unfortunately, there's a lack of visual polish and some baffling decisions that hold this game back. There's a lot to do but, as with most endurance sports, newcomers have to deal with a lot of waiting before the action really starts.