Now, this is a tricky one.  Thunderbolt Collection is another retro-collection from QuByte.  They previously brought us the Humans Collection and have now dug even further into the archives to pull out this collection of two little-known shoot ’em ups.

What you get with this collection are Thunderbolt Fighting Plane and Thunderbolt II.  Now you’d be forgiven for thinking they are a game and its sequel but life is never simple when it comes to the intricacies of Eastern gaming, so let us try to explain. 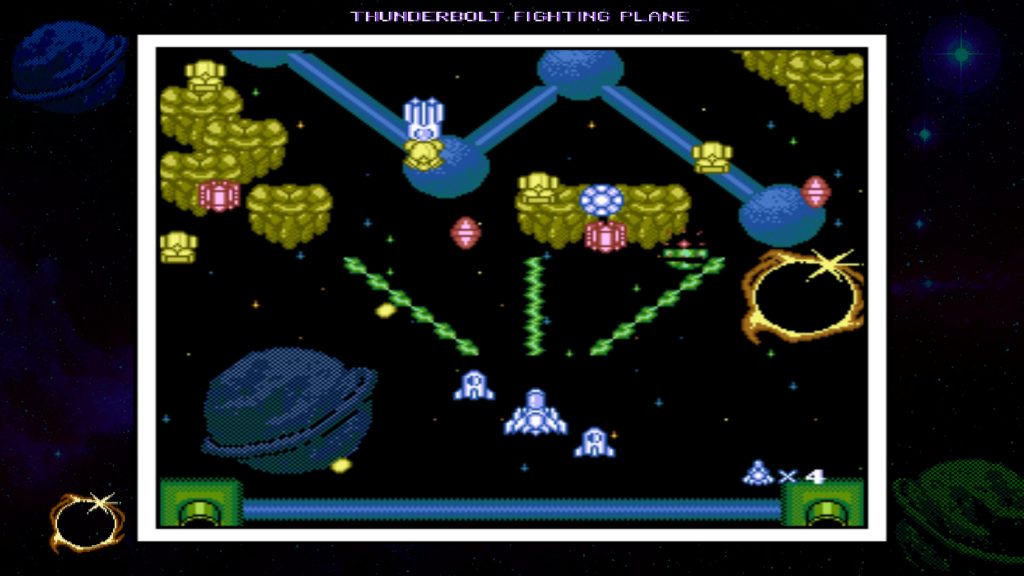 These are apparently the same game.  Sort of.  Thunderbolt Fighting Plane was created in 1993 for the Famicom (the NES as we know it) but only came out in 1995.  The same year Thunderbolt II was also released, this time on the Mega Drive.  Both games were then released in the West for the first time in 2019 but, oddly, on the Sega Genesis (what the Americans call the Mega Drive).  There is no Thunderbolt game, although the Chinese title of the game, Raiden Legend II, suggests it might have ties to the Raiden games.

Now if that’s confusing, the thing that’s really baking our brains is that this collection bothered to resurrect the series at all.  For mid-’90s shoot ’em ups, both of the games on offer are pretty primitive efforts.  But we’ll get into that with the rest of this review. 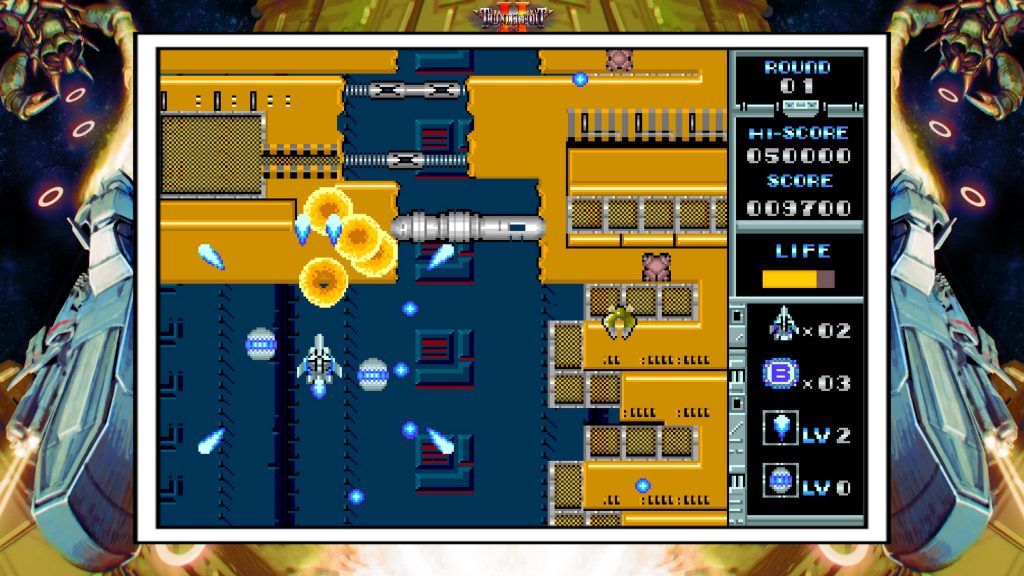 Firstly, what you need to know is that both games are vertically-scrolling shoot ’em ups set in space.  You know the deal.  You’re a single space ship and you’ve got to fly ever upwards through waves of enemies and end of level bosses.  Standard stuff.

by default, but that’ll never do).  The Mega Drive game adds a bomb too but that’s it.  Then it’s just a case of flying, dodging and shooting. 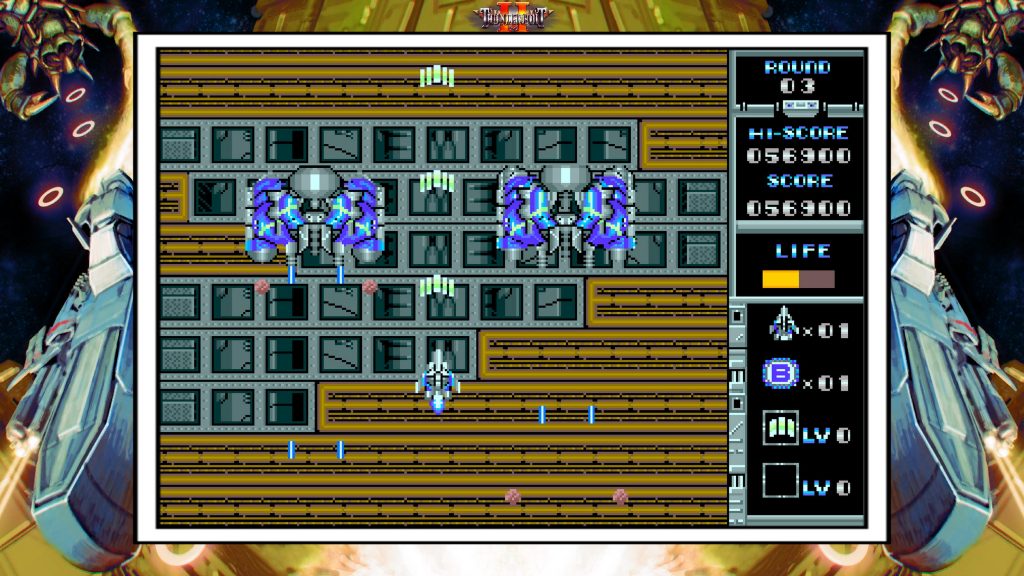 Now, of course, any self-respecting shoot ’em up needs a power-up system and these games offer three types of weapon, orbiting ships (that act as shields) and secondary missiles.  To power them up you just need to collect power-ups of the same colour but be warned, getting hit will level your weapon down.  It won’t kill you, unless your shields are down, but much like R-Type, losing firepower is only going to lead to a bad time.

On playing the first game, we were pretty shocked.  It’s terrible.  We didn’t know it was a NES game but it didn’t surprise us to find out.  Your movement is clunky, your weapons are weedy and the animation on enemy ships is so bad that they practically teleport across the screen.  There’s a real lack of smoothness that makes the game borderline unplayable.  Now, of course, shoot ’em experts are a different breed so there are probably people out there who can 1CC it but that’s not you and it’s not us.  Mastering the game will take all sorts of dedication but with such repetitive gameplay and a real lack of eye-candy, we’re not sure why anyone would bother. 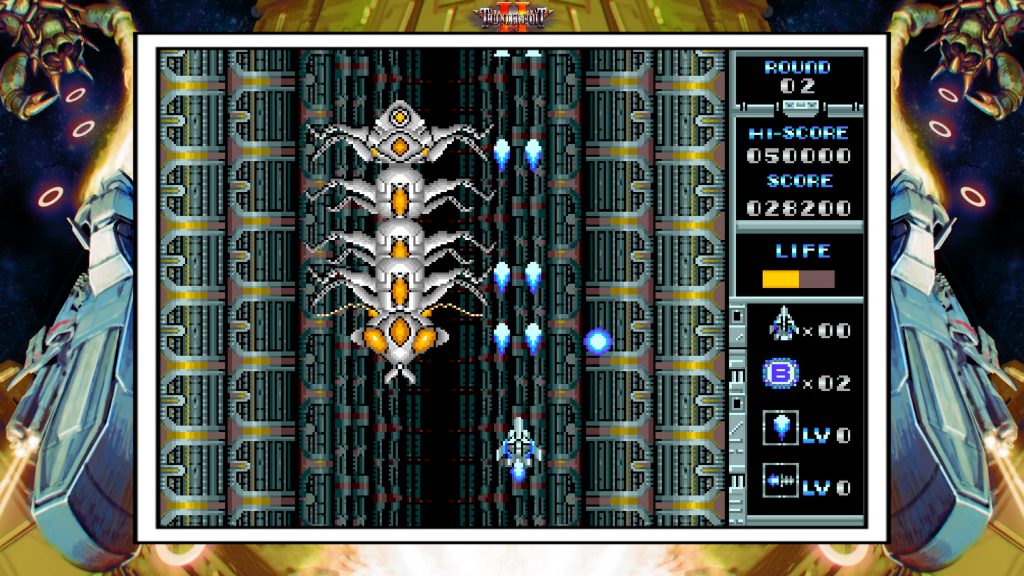 Now, Thunderbolt II is certainly a bit of a step up.  That’s because the Mega Drive was, mathematically-speaking, a billion times better than the NES.  If not in terms of technical chops but just in terms of being good.  Anyway, this game is certainly a bit smoother than its little brother but it’s still not great.  You’ve got to think that in 1995 Cave were about to drop Donpachi on us but even in the ’80s there were much better games than this.

Thunderbolt II is marginally easier than Thunderbolt Fighting Plane but make no mistake, the game is savage.  Even on Easy.  Enemies still move very quickly (and again, not particularly smoothly) and so you’ll be taking damage very consistently at first.  Also, where the NES game gets infinite continues, that’s not the case here.   However, both games do at least get one modern quality of life enhancement and that’s a quick-save function. 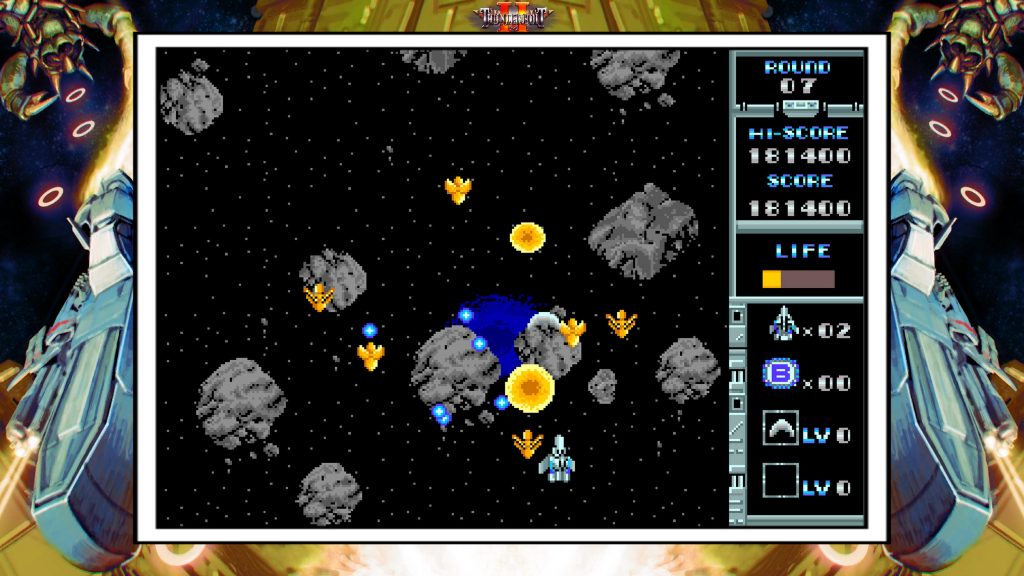 Using that you should be able to get through the game with a significant degree of frustration but played that way the game actually becomes fun.  You’ll be able to preserve your weapon status, working your way up to having significant firepower.  Sure, the boss battles will literally make you age by a decade but we kind of enjoyed playing through Thunderbolt II as dirty cheats.

Whichever game you play, the presentation isn’t great.  Both games are poor examples of shoot ’em ups graphically, especially as this genre really benefits from nice visuals.  They’re both simplistic, they move badly, the visuals aren’t very clear and enemies have a nasty habit of hitting you before you even know they are there.  There are a handful of retro port standard visual options which let you tweak the aspect ratio and also add scanlines or smoothing filters but these don’t really improve anything.  Also, compared to other recent shoot ’em up ports, the scanline and CRT options aren’t customisable. 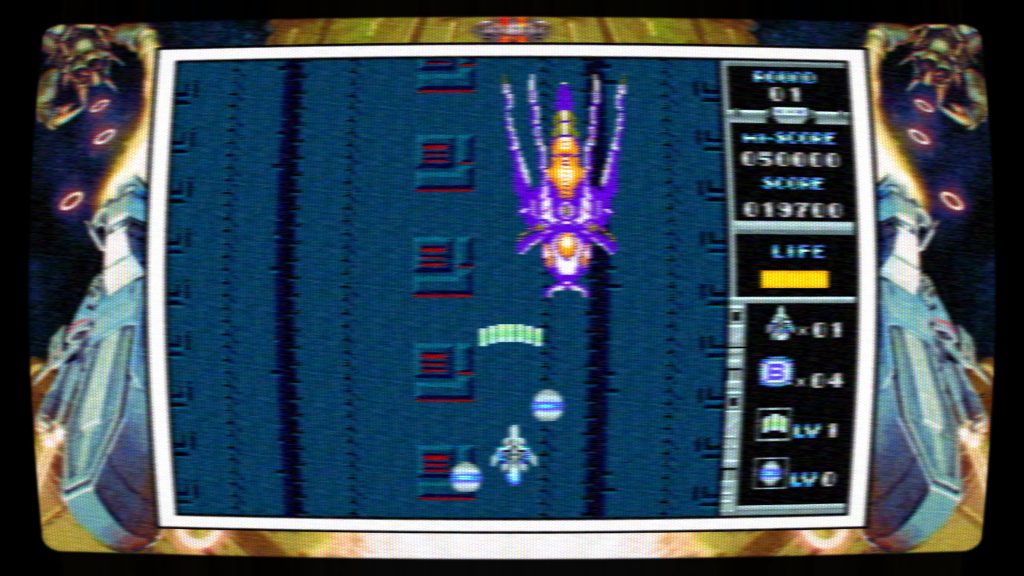 The audio doesn’t fair much better either with weedy sound effects and shrill ’90s console music making you reach for the volume controls right away.  But that’s kind of what life was like for gamers not lucky enough to have a SNES or Amiga back in the ’90s.

Overall, it’s kind of hard to summarise this review.  These are two games that you couldn’t really play in the West unless you went down the *ahem* incredibly illegal and immoral piracy route *ahem* so there’s value in owning legit versions of them.  And Taiwanese gamers might enjoy reliving a couple of games from their youth.  For everyone else, unless you’re the most devoted shoot ’em up player (the kind of person who calls them ‘shmups’) then you might want to avoid them.  But if a copy does ever end up installed on your PS4/5, there’s definitely some retro fun to be had with the second game but it’ll only be a temporary distraction at best from the large number of better shoot ’em ups on PSN.

Thunderbolt Collection
4 Overall
Pros
+ Two rare games that are hard to get legally elsewhere
+ Quick-saving gives normal players a chance of completing them
+ Reasonably good weapon systems
Cons
- Poor visuals and sound even for the mid '90s
- Enemy animation makes the game borderline unplayable at times
- Minimal options
Summary
Thunderbolt Collection is an interesting curio for shoot 'em up collectors. There's definitely some value in owning two hard to get mid-'90s console shooters but the games weren't celebrated back then and that's for good reason: they're just not all that good. But as a package, you have to admire QuByte's efforts to bring these games to a new audience.