South of the Circle is, as its name might suggest, a narrative-led adventure set on Antarctica for the most part. Originally developed for Apple’s heavily moderated Arcade service by State of Play and published by 11 Bit Studios on consoles, South of the Circle is very much the well-crafted thing of beauty. To call it a game would play down the manner in which the story unfolds. Just as calling it a walking simulator would sell it short.

Opening with a plane crashed into a snowdrift, you’re gently introduced to the cleverly implemented dialogue system that is your primary means of interaction and tool for influencing your path through the story. Rather than try to describe it, your choices will become available as you go through the story using choices that fit these mood types, depending on context. Here you go. 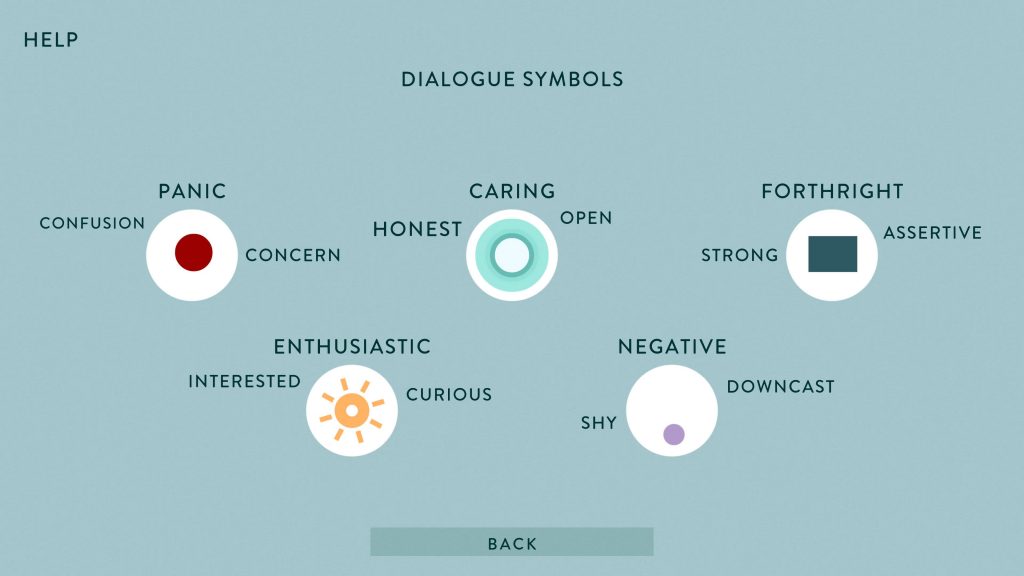 Your swarthy Aussie pilot Floyd is incapacitated to the extent that the character you control, Peter, has to strike out on his own in the hope of finding rescue at the nearby British research station.  Upon reaching the research station, you find it devoid of inhabitants, seemingly having left in a hurry. We’ll leave any more in-depth discussion of the plot at that for fear of ruining the experience for you.

On the way to the flashing red light of the research station, you’ll be introduced to how South of the Circle switches between the two distinct time periods of several months. It’s very deftly done, though after a while you’ll begin to second guess when the segue between the past and present is going to happen. 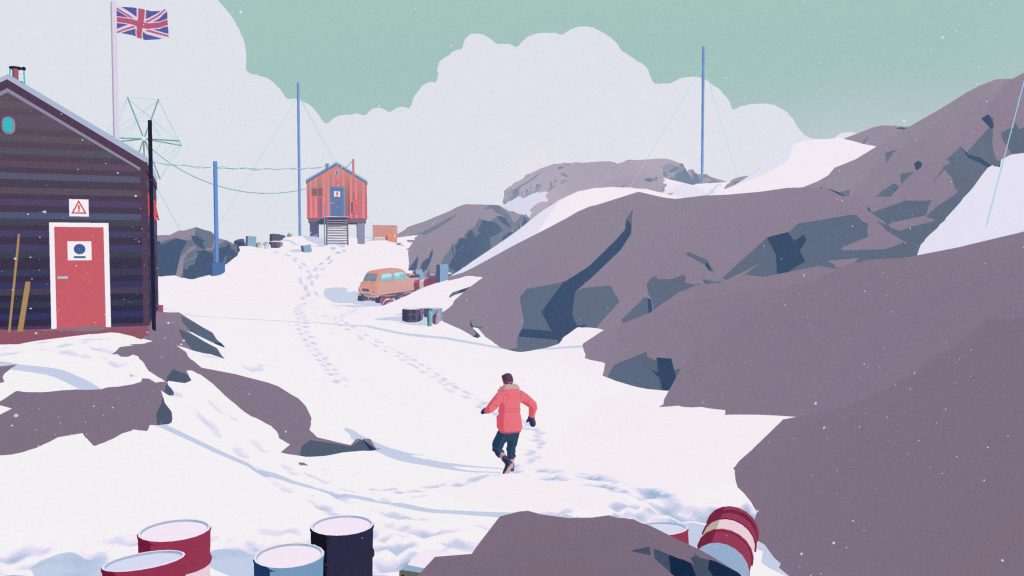 You’ll be introduced to the charming male and female leads properly on a train journey, voiced respectively by Gwilym Lee as Peter and the delightful Olivia Vinall who does a great lilting Fife accent in her turn as Clara. Both happen to be Cambridge academics, only Peter has an ongoing paper that he’s been struggling to nail down the direction of. With Clara’s help he finally finds the angle he’s going with. Along the way he realises there’s more to their relationship than just a shared interest in weather patterns.

In doing so, he butts up against his chauvinist fellow academics and his resolutely old school professor, played in a moustache twirlingly Machiavellian performance by Anton Lesser (better known as Qyburn from Game of Thrones). This is all played out against the real-life backdrop of the Cambridge spy ring being unveiled in 1963 and the paranoia among the establishment that any perceived dissent must implicate you as a communist too. 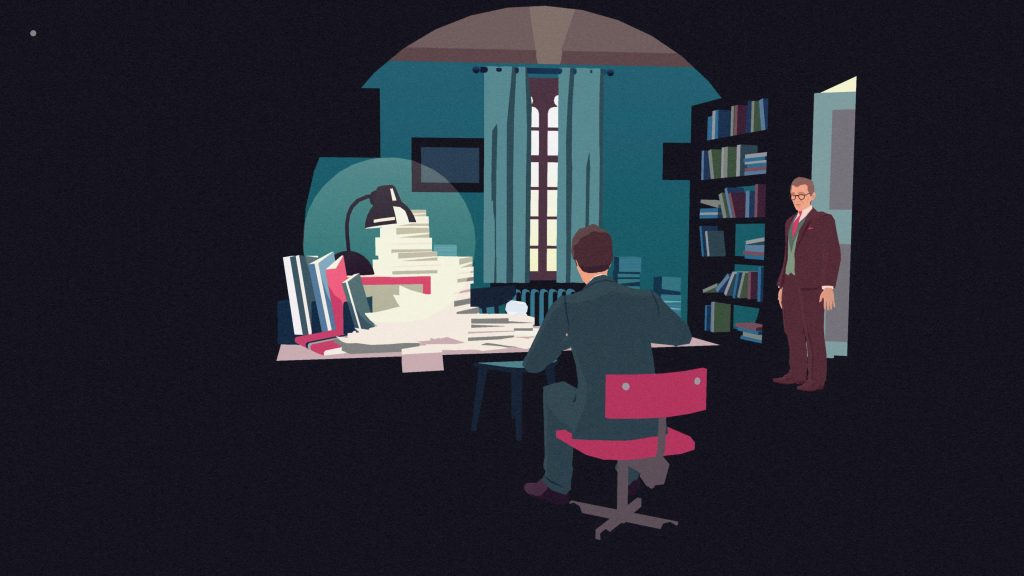 As you can see from the screenshots, the cel-shaded graphical style is very well done, only occasionally coming unstuck when a character’s limb clips through a table top for example. It’s all scored by a wonderful electronic soundtrack by Ed Critchley, which while anachronistic, fits the tone very well.

The initial locations are faithful depictions of real -world Antarctic research stations, though due to the way the plot unfolds, you’ll happily allow the developers a little dramatic licence. As you progress you’ll unlock reference photos and concept art in a submenu, this showing how well realised State of Play’s vision is. 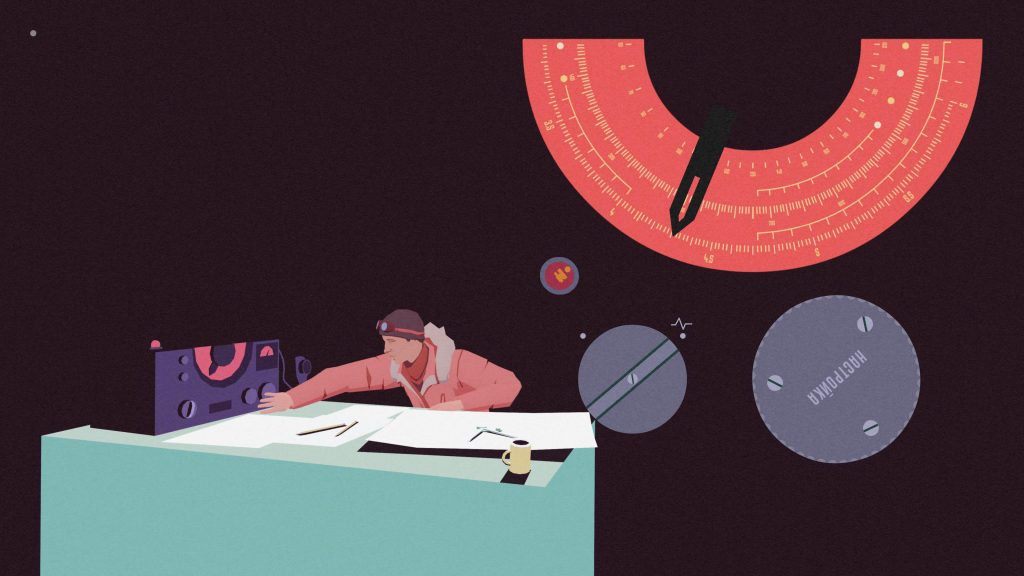 As well as negotiating both the ice-cap and the frosty atmosphere in Cambridge, you’ll occasionally need  to examine maps and in a repeating mechanic, tune radios whether in your car back home or to touch base with Floyd back at the plane. It’s a well-done thing in terms of evoking the sensation of rotating a dial to tune in before everything went digital, heck we’re old enough to remember having to manually tune in individual channels on the old Hitachi portable TV…

Once you embrace that you’re along for the ride as the storyline gently teases out over its almost four hours, you’ll have a far more chilled time playing South of the Circle. Even trophy hunters will have a chilled time of the experience, with all but two trophies unlocking for us during our playthrough. 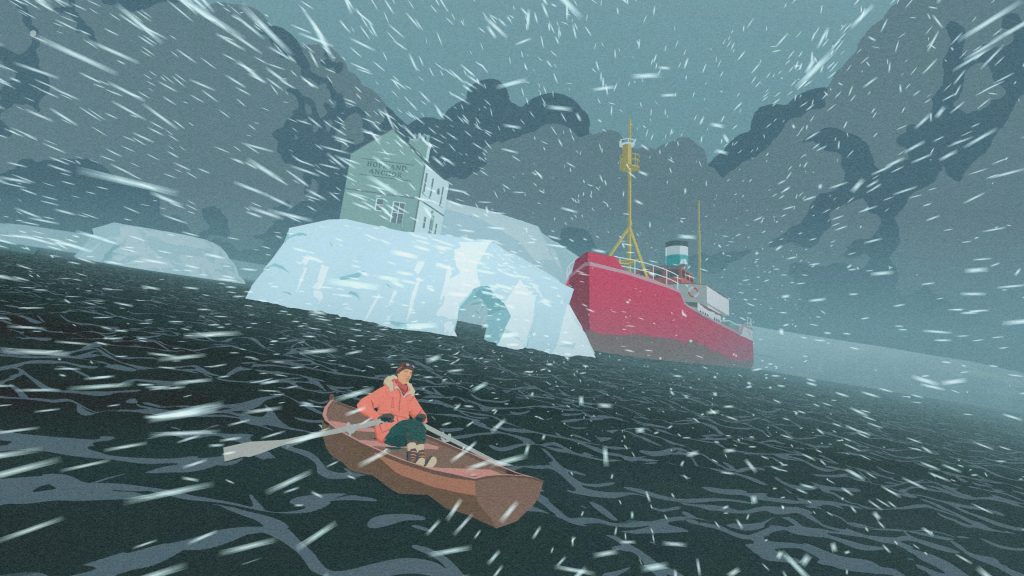 In conclusion, South of the Circle is a wonderful depiction of mid-sixties Cold War paranoia and how its tendrils founds its way into the highest echelons of British society, making otherwise rational people act anything but. Stellar voice acting and excellent production values make for a great way to spend an evening or two. Don’t rush through, just enjoy it.

Given this is all about the plot, it’s a one and done experience really, but you could decide to play again with a more nihilistic or optimistic outlook. We might well do that anyway in our mop-up of the final two trophies.

Summary
South of the Circle is an exquisitely produced dramatisation of the rampant paranoia present at the height of the Cold War almost sixty years ago. It shows how it affected the world geopolitically as well as on a more personal level for the wonderfully depicted protagonists of the piece. Special mention must go to Ed Critchley's excellent score and the stellar voice cast.