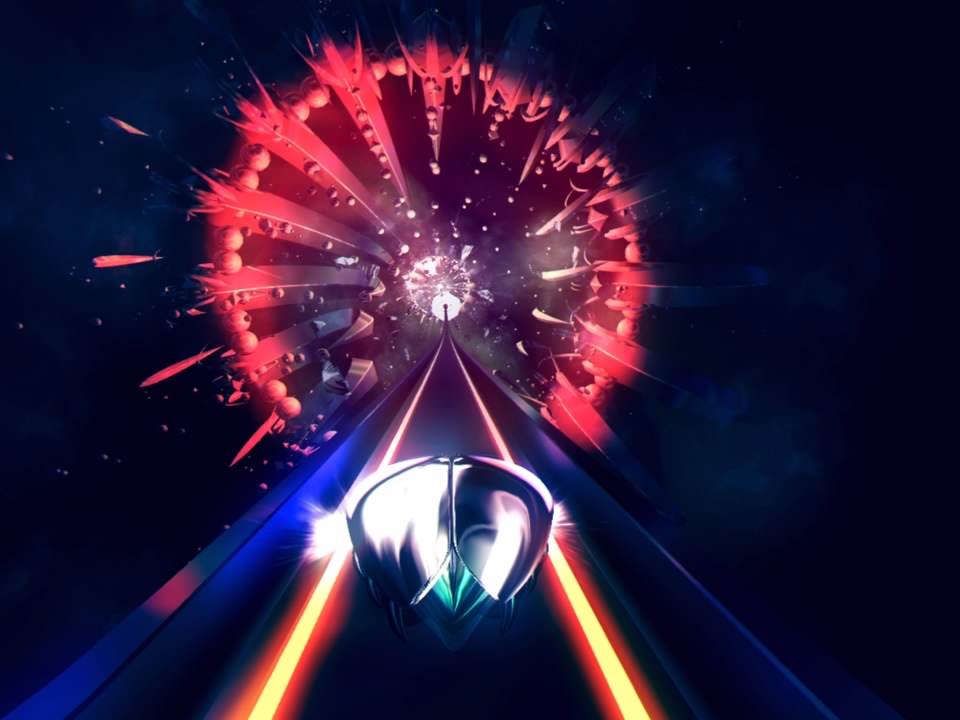 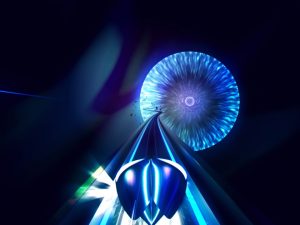 VR lends itself more readily to certain types of games. Anything where you don’t need to move around too much is usually well suited which is why Rez and Until Dawn: Rush of Blood are two of our favourite VR games so far. Thumper is one of those, placing you as it does on a track without the need or ability to move (for the most part) and then hurtling you into the screen.

In some ways, it is similar to Rez. It plays out in displays of starkly-coloured geometry backed with electronic beats, although Thumper more direct link to the music.

As you are propelled forwards, items and obstacles on the track will require your to perform the correct actions in order to not take damage. White markers on the track require you to hit X as you reach them (which will be timing with the beat), pressing X and either left or right will just you safely through turns in the track while other obstacles will require other directions to be pressed.

Timing its rhythmic presses to catch those beats just right.  At times a quick tap of a button followed by a turn in the track will feel like your are somehow playing a kick/snare pattern.

It’s all very straightforward but where Thumper gets you is when these moves are combined at high speed. What starts out like Amplitude‘s simplified cousin soon becomes an intense journey into VR, requiring you to stay focused as you rush ever onwards.

At it’s best, Thumper totally works. The mix of button presses and turns will completely capture the rhythm of the soundtrack and the VR brings it all immediately to the front and centre of your consciousness (you can play without VR as well but why would you?). It can be very intense and your thumbs dance manically over the DualShock 4 and your retinas struggle to hold on. 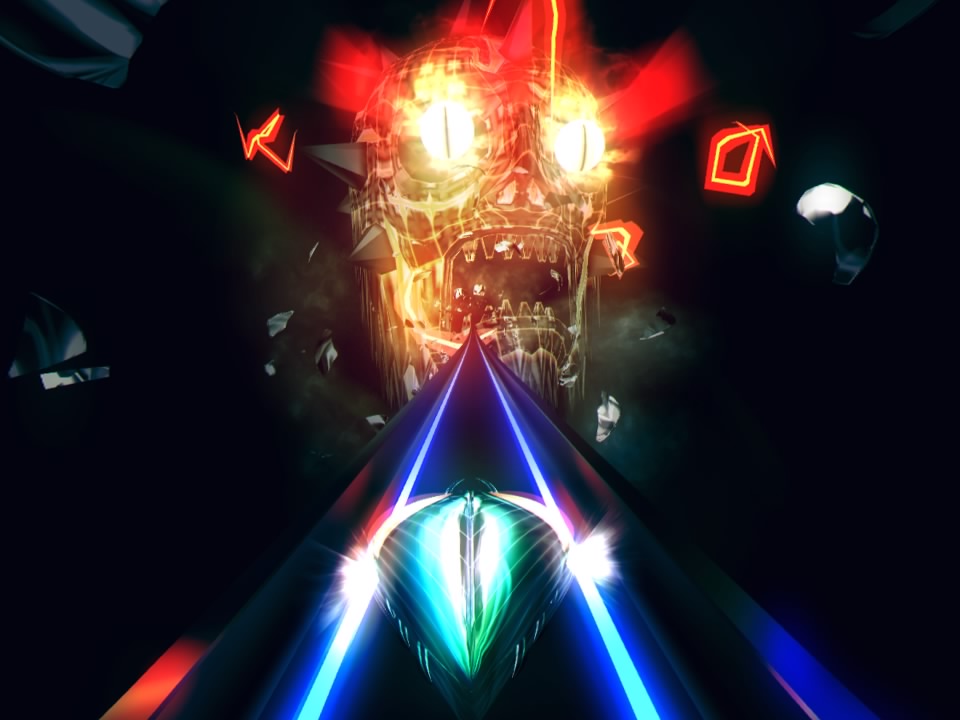 The controls are intuitive, and responsive, enough to rely on and the difficulty curve is as smooth as it gets. While the game does get pretty damn tricky later on, you’ll definitely be in good shape when you get to those points as the game is constantly honing your abilities.  This is most noticable if you take a day off and come back to the game on a later level where you’ll find the game living up to its name by thumping your brain and ego simultaneously as you eat quite the bag of dicks at the game.

However, Thumper also has a big issue and that is repetition. Although the game is set across nine levels, each is split into dozens of smaller sub-levels. This is good in that it allows you to stop and start the game without losing too much progress but while the sub-levels in a level are all quite similar, and that is kind of understandable, the levels themselves all are too.

Where Rez made each of its levels different enough visually, and sonically, to make them all stand out from each other, Thumper doesn’t do that at all. Each level is made up of the same handful of visual elements and the soundtrack barely evolves which is a shame given how unrelentingly bleak and industrial it is. Instead of the game feeling like you are on a track through some sort of futuristic LSD visual, it feels more like being trapped on a conveyor belt in a factory that manufactures trauma. 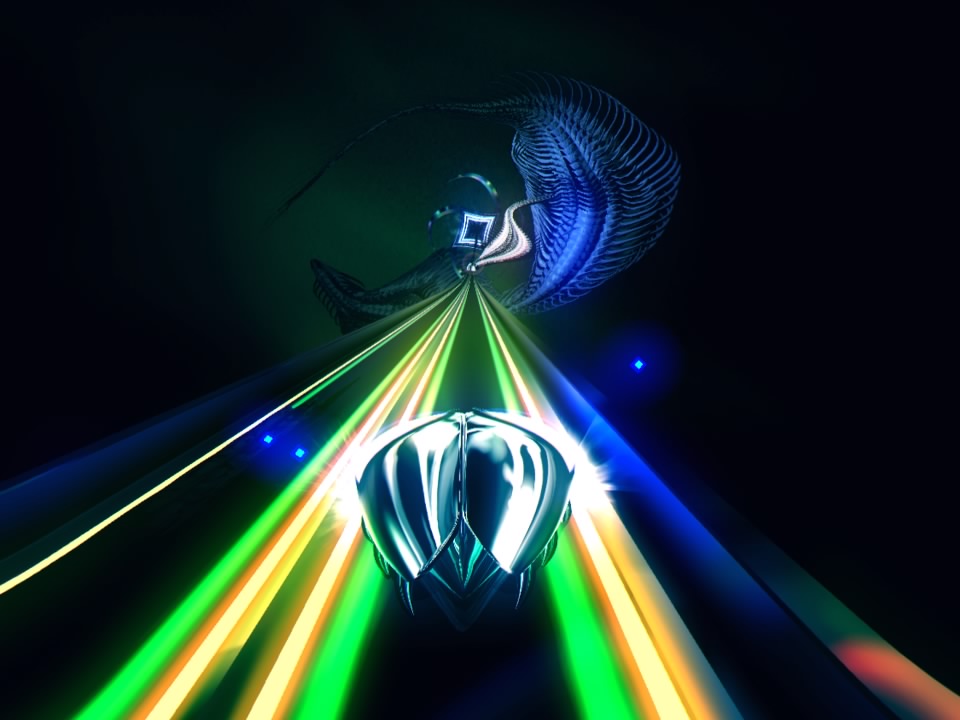 This is further confirmed by the end boss on each level. As you reach the final sub-level, a firey head rises into view and requires a series of perfectly executed sequences in order to destroy it. Although the sequences change, the visuals do not and after a while I couldn’t help feel let down by that. 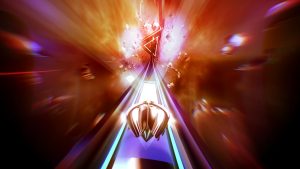 Also, while the VR effect is good, the visuals are actually pretty bland and the draw distance isn’t that impressive either so the game ends up looking pretty ordinary compared to the beautiful scenes generated by Rez or even the plain but entirely in your face visuals of SuperHyperCube. While it is good that the visuals never get in the way of the gameplay, and that is important for sure, I just feel like even a change of colour scheme would be a step forward, even if the game could really use a few changes in mood and style too.  Also, outside of VR mode the game is much harder to read for some reason.

However, I’m still a sucker for speeding down a track and tapping out rhythms and so overall Thumper is still a good game, if not the masterpiece that other reviews might have you believe, but it seems to stop short of greatness by sticking to one design choice and never varying.

Thumper
7 Overall
Pros
+ Well-designed rhythm action with lots of satisfying patterns to tap out + An intense VR experience thanks to the speed everything moves at
Cons
- Quite repetitive - The atmosphere is all a bit industrial and oppressive - Much harder to play outside of VR mode
Summary
Thumper has some great rhythm action to offer but the start setting and oppressive tone often makes it feel like what Rez might have been like if the Germans had won World War 2.