It might seem odd reviewing a game that comes free with a new console, after all it’s not going to cost you anything to try it yourself, but is Astro’s Playroom worth your time when you could be playing one of your other shiny games that actually cost you money? Hell yeah it is, especially if you’ve got a history with PlayStation. 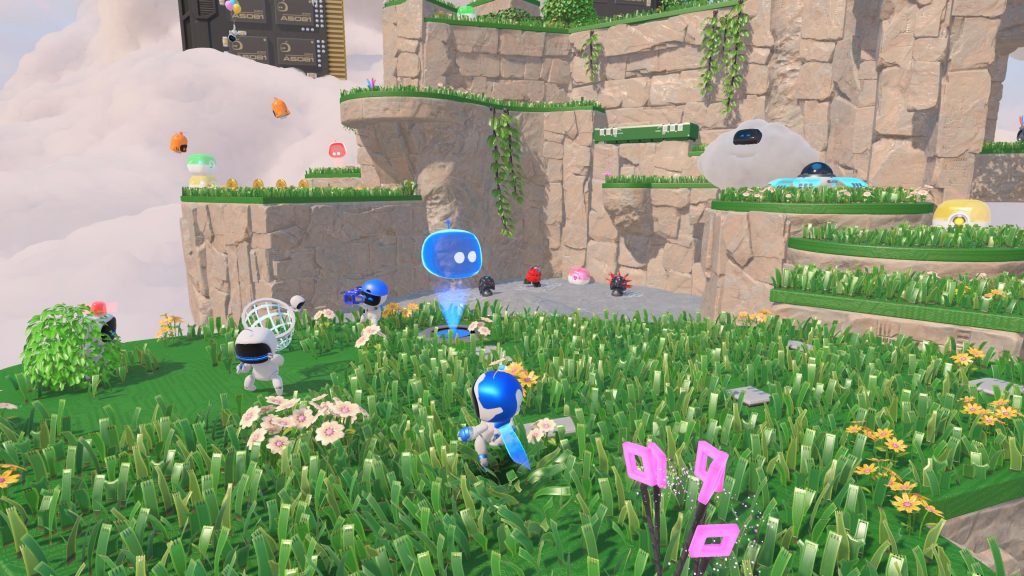 Astro is closest thing PlayStation has to a cutesy mascot character these days. He doesn’t feature in much however, with the little robot characters first being introduced to show off the PlayStation Camera on the PS4 and then Astro having his own full game to show off PlayStation VR. Now he’s back to show off a new piece of kit, the new DualSense controller that comes with the PS5. As stated in the opening paragraph the game is free, pre-installed on the system and provides a great introduction to the controller whilst taking you on a nostalgia trip.

You play as Astro, a little robot fellow, as he makes his way through the innards of the PlayStation 5. You start in the CPU hub area and can choose from four different levels themed around the cooling system, the GPU, the RAM and the SSD. The visuals take the form of common platformer stereotypes like an ice world and forest level but you’ll see bits of technology littered around that’ll make up obstacles or platforms.

Astro’s Playroom is a 3D platformer, with the levels being pretty linear experiences but with hidden things to collect as you go through. Astro can jump, initiate jets to hover briefly, punch enemies and charge a spin attack. The difficulty is set quite low, with most enemies not being too much of a threat and only certain sections having death pits or spikes. Astro does die in one hit but even if you do fall the nearest checkpoint is never far away and loads very quickly, as does everything else. 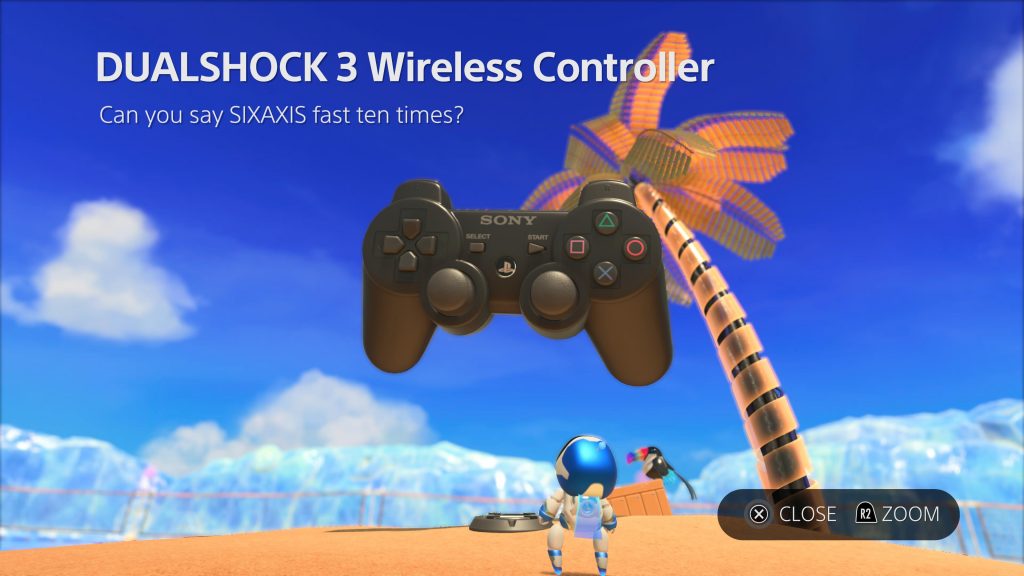 The difficulty comes from getting 100% in the levels, which isn’t too difficult either. I’d say the difficulty is pitched pretty perfectly as although I missed the odd collectible on the way through levels I was able to find them all without any aid from Google which made it all the more enjoyable. If you’re not a completionist you might wonder why you should care about collecting things but here they come in two forms. One is a puzzle piece which creates a mural back in the hub celebrating PlayStation’s history. The others are artefacts which take the form of PlayStation consoles and peripherals.

Find one of these and you’ll get a 3D render of say, a PlayStation Vita or a PS1 Memory Card and a smile on your face. Indeed as you run around the levels there are nods to PlayStation memories all over the place, with your little bot friends taking the roles of classic PlayStation game characters. Not necessarily exclusives, Resident Evil and Tomb Raider are both featured and yet I played both of those on the Sega Saturn, but games that are or have become synonymous with PlayStation.

Luckily the platforming action is great so it’s not just relying on nostalgia to entertain you. As mentioned you’ll be running around linear environments, jumping across platforms, punching enemies and picking up collectibles and coins (which are used to get more collectibles from a Gacha machine). That doesn’t really sound like it’ll show of the controller though does it? Well each level has a gimmick area to demonstrate a key feature. Gimmick might be a little harsh but these areas are designed simply to draw attention to a specific feature of the DualSense, but it does a really good job of it. 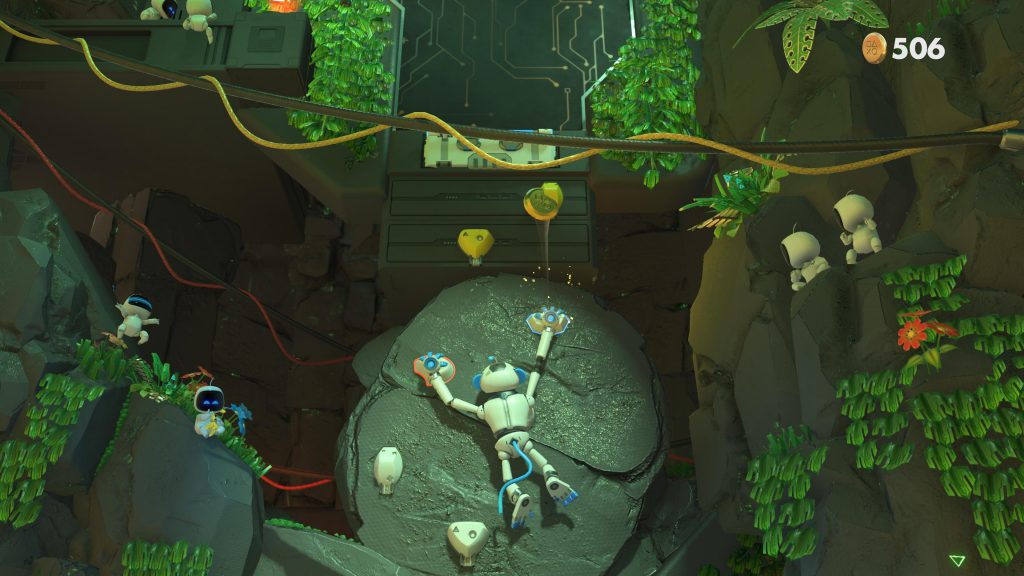 When you start the game it asks you to press the triggers to ignite a rocket and this shows off the resistance on the triggers as they lock whilst partially compressed until the rocket fires. Combining this with the haptic vibration and the sound coming out of the controller and you’ve got a very immersive action. Within the levels you will jump into a suit to initiate these gimmick areas, zipping up the suit with a swipe up on the touch pad which PS4 players will be familiar with.

One switches to a 2D plane and has you dressed as a frog. You need to hold the

button to compress the spring you have for legs and tilt the controller (remember motion controls?) to aim where you want to go. It works really well and you’ll be doing big leaps and little hops to climb over obstacles and traverse moving platforms. Another has you rolling a ball by swiping the touch pad which is pretty self explanatory, whilst another has you pressing the triggers to control a rocket whilst steering with motion controls.

My favourite though is the monkey suit which has you holding onto hand holds with the triggers and using the motion controls to life yourself up to the next and swing on poles. This is good because it uses the features really well and has areas which require a bit of timing or a deft touch on the triggers so as not to break the holds. Levels are split into four areas, two platforming areas and two gimmick areas and they break up the action nicely. 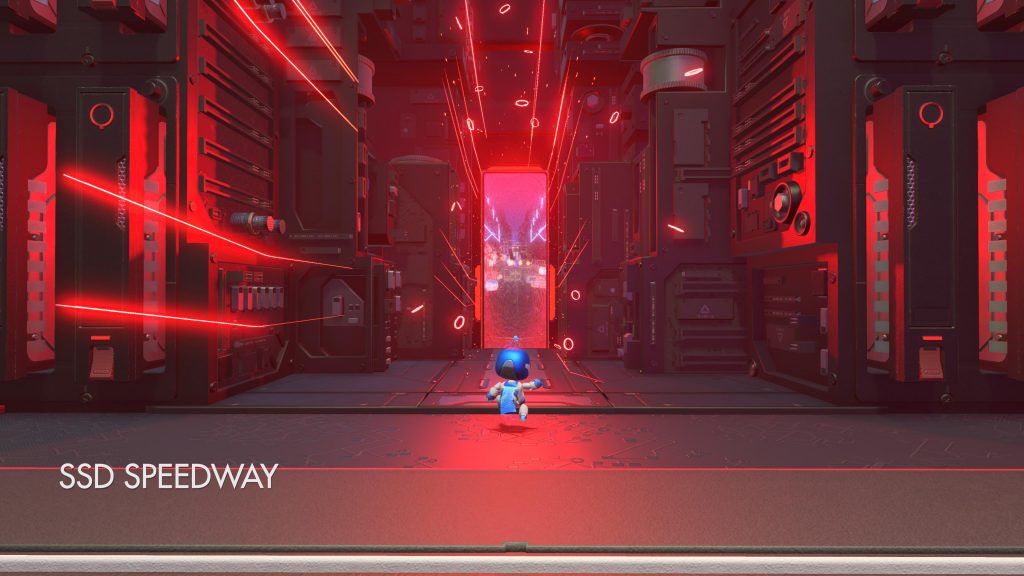 Once you’ve completed all the levels and collected everything there is more to do. There is one boss battle, PlayStation themed naturally, and eight speed run stages to test yourself on. They’re not too tough but there are leaderboards which appear to be built in at the system level so you can compete with those friends who have been lucky enough to get a PS5 or anyone else who has challenged that level. It’s an extra bit of content which pads out what is quite a light experience but for the price of free no one will be complaining.

As this might be the first thing you power up on your new system the graphics will probably impress you, to a point. Everything is colourful, solid, sharp and runs smoothly but it’s not the killer app that’s showing off the power of your new console. It is very attractive though and full of character as these screenshots show. Sound comes in two forms, through your television and through your controller. The sounds that come through your controller when combined with the tiny vibrations you feel depending on the situation work to great effect. At one point Astro has an umbrella over his head and you can feel the individual rain drops hit it. It really adds a depth to what is happening on screen.

The sound out of your TV is primarily cutesy sound effects and music which is also great. They all follow a similar theme tune, but each level takes it in a different direction with my favourite being the GPU level which has vocals. I’ll let you discover who is singing and what they’re singing about but it’s just another layer of joy which Astro’s Playroom brings to the table. 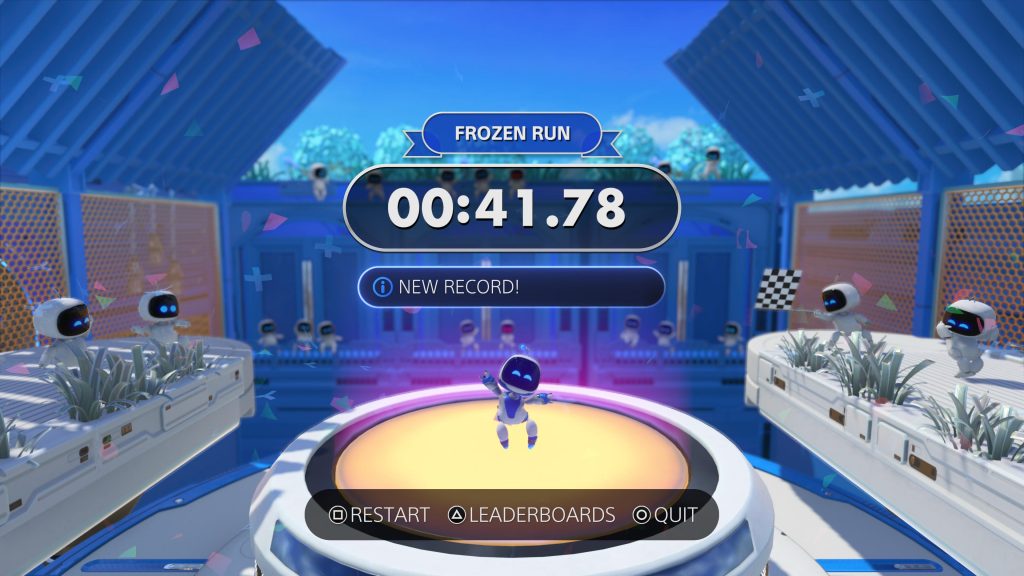 If it wasn’t free then you’d be looking at a very enjoyable, if short, experience. It took me around four hours to get all the trophies and depending on how good you are at finding the collectibles it could take you slightly more or slightly less time. However, it is free and it’s a fantastic introduction to what your new machine can do. Add the sprinkling of nostalgia that they’ve generously applied all over the game and you’ve got a perfect start to a new generation. Hopefully other developers will take note of what can be done and run with it.

Astro's Playroom
8 Overall
Pros
+ Shows off the new features of the controller fantastically
+ Full of nostalgia
+ Vibrant and full of character
+ Hey, it's free
Cons
- Very short
- Nostalgia might not do anything for you
- Only one boss battle
Summary
Astro's Playroom is the perfect way to start your PlayStation 5 experience. It's a fun little platformer with lashings of PlayStation nostalgia which introduces you to all the fantastic new features of the DualSense controller.