No, this isn’t another Dark Souls wannabe putting ‘Souls’ in their name to attract attention. Tormented Souls on PS5 gets its inspiration from elsewhere; namely old school, survival horror. We’re talking the big three: Alone in the Dark, Resident Evil and Silent Hill. As a fan of these titles I tentatively approached this review, I’ve been burned by indie projects before. 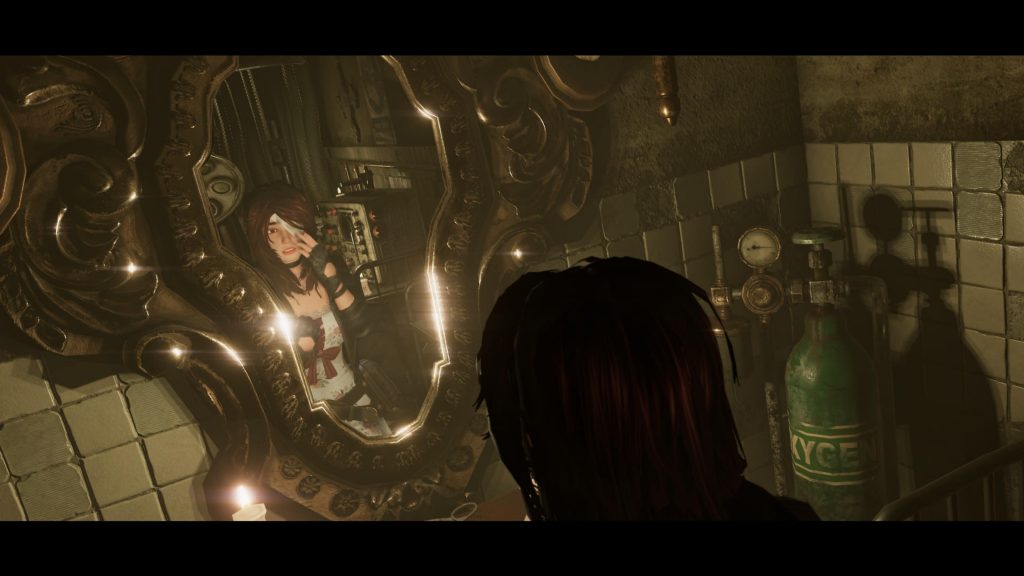 You play as Caroline, who receives an unusual photo one day by post. It’s a picture of twins, with a message about her leaving them behind. She visits the sender’s address to find an abandoned mansion, converted into a hospital and is knocked unconscious shortly afterwards. She then wakes up in a bathtub, with a tube down her throat and her right eye removed. What’s going on? Who sent the note? Who did this to her? These are just some of the questions that’ll be answered as you explore this creepy locale.

You do so in classic survival horror style. That means fixed camera angles (though not static, they can move) and, if you so choose, tank controls. When it comes to fixed cameras I like tank controls, so I used to dpad throughout so that up was always forward no matter the camera. If this makes your skin crawl more than the monsters then if you use the analogue stick you just point in the direction you want to go, relative to the camera. It can cause an issue when the angle changes but different strokes for different folks. 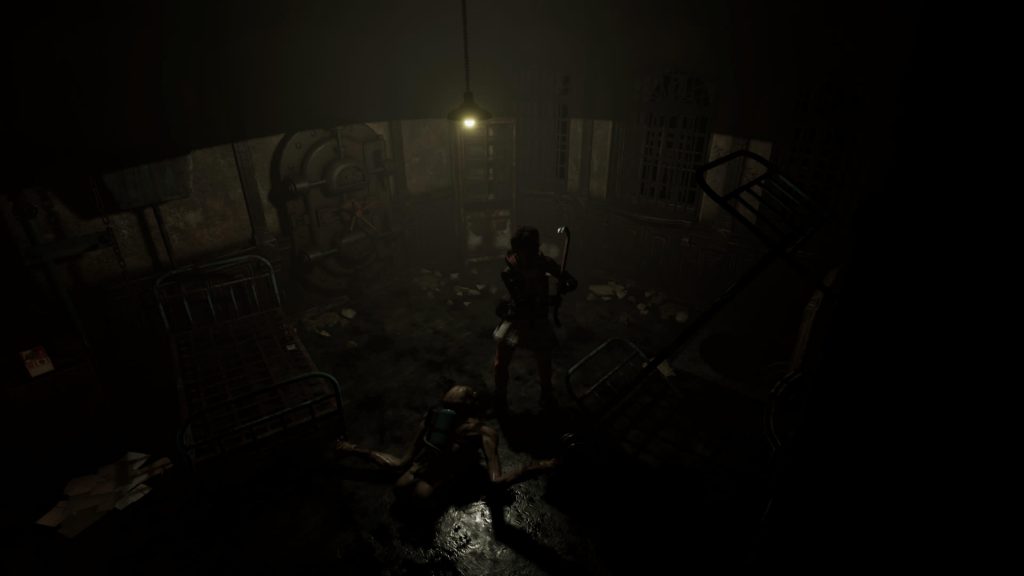 As you explore certain items or parts of the environment can be interacted with, a button prompt appearing as you get near. Caroline may just comment on whatever you’re looking at or it may be something to pick up or a puzzle. Items can range from ammo for your weapons, health items or useable items that will be needed for future puzzles. Puzzles come in a couple of flavours: taxing and bloody taxing.

Sometimes you’ll just have to use the right item in the right place, other times you’ll have to twiddle some switches and dials in the right order. Generally the game is very good at giving you the clues you need to figure out what needs to be done but there were about three occasions where I was completely stumped, not even sure if I was focusing my attention in the right place at that moment. I did get through however. The game walks a fine line and it lands on the right side of that line most of the time, giving you a challenge that is rewarding to figure out but on the odd occasion it does withhold just a little bit too much information. 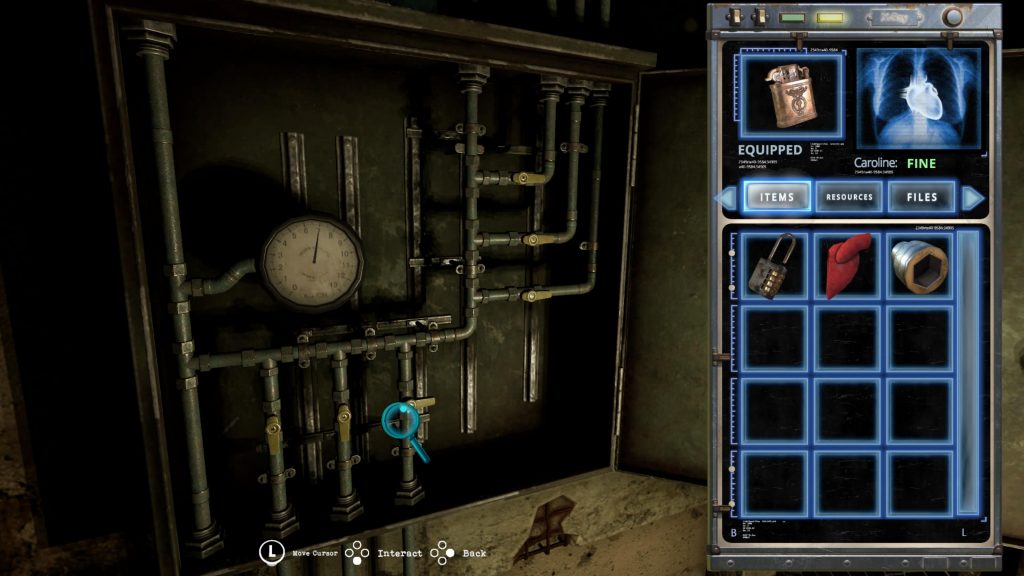 Also as you run around searching rooms and unlocking doors you’ll encounter monsters. You’ll get a few different weapons to help deal with them but, although I understand why they’re there, I could do without the combat element. I’m not a fan of the monster designs and having to fight, conserving ammo at times, just didn’t add anything for me. It adds a potential death which is near enough impossible otherwise which adds to the tension, especially as you have to manually save with finite use items a la Resident Evil, but the combat was simple enough and clunky enough to detract from the game a little.

Although I found the monster designs to be a little generic the environments are very nice. Again, not massively original but the game’s reliance on darkness and you providing your own light source makes for a lot of pleasant looking (considering the nature of the visuals) dynamic lighting. The few human characters there are are more stylised than realistic but they fit the scene reasonably well. The acting in cutscenes, both voice work and animation, isn’t the best but it does the job. You could argue the voice acting being as it is is a nod to its forebearer and its by no means terrible but those cutscenes don’t hold the gravitas that they could if they were more Silent Hill than Resident Evil. The rest of the sound design is great though, adding to the foreboding atmosphere. There’s also a lovely safe room theme. 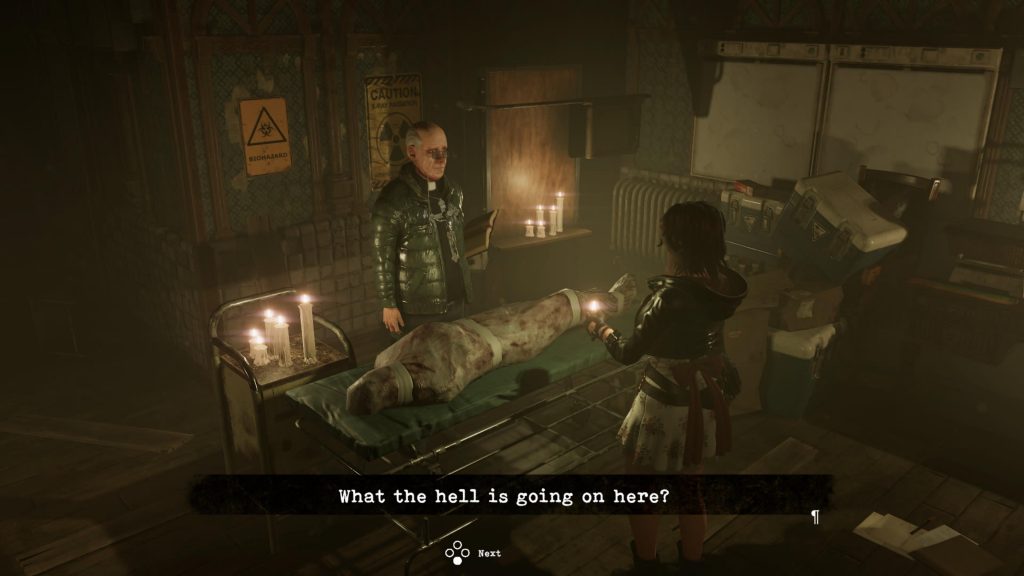 You have a few different endings to go for and it took me, by the game clock, seven and a half hours to beat. It was probably far more, especially as I got stumped a few times. Even so, the trophies are similar to the Resident Evil games in that you’re tasked with completing the game in under three hours, without saving and/or without healing. So once you’ve beaten it you can actually whizz through it pretty quickly when you know where to go and how to do the puzzles. I’ll certainly be going for the platinum when the broken trophy for one of the endings is fixed.

Tormented Souls surprised me. I wasn’t expecting it to be bad or anything, but from moment to moment it really did feel like a Silent Hill game, then a Resident Evil game, then back again. It can maybe be a little too familiar at times but when it’s as enjoyable as this then I don’t particularly mind. The puzzles can test your logic skills but can also go a little too far but it’s all doable and if you’re worried about that sort of thing but enjoy this style of game then there are guides out there already. 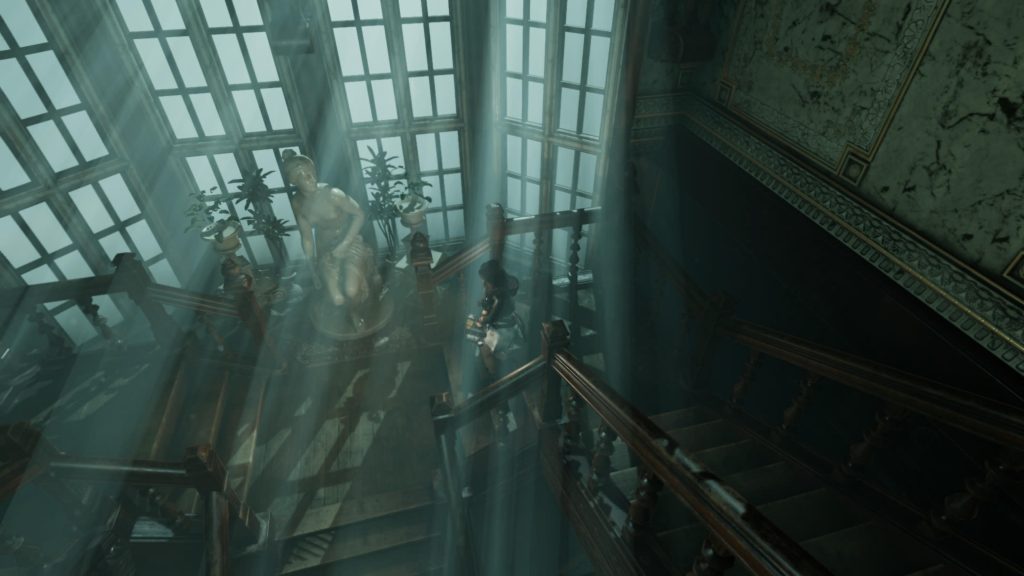 As an homage to classic survival horror Tormented Souls really nails it. It doesn’t surpass its inspiration, but it comes closer than it has any real right to. Definitely check it out if you prefer Resident Evil Remake to Resident Evil 2 Remake.

Tormented Souls
8 Overall
Pros
+ Really feels like old school survival horror
+ Exploration is very rewarding
+ Puzzles are tough but satisfying
+ Lovely real time lighting
+ Great sound design
Cons
- Some puzzles could do with just a smidge more guidance
- Combat doesn't really add too much
- Acting doesn't do the atmosphere justice
Summary
Tormented Souls is an excellent love letter to survival horror games of old. With that comes limited saving, dodgy voice acting and clunky combat but that doesn't detract enough from the exploration and puzzle solving to sour the experience. Fans of the genre absolutely must give this a try.