The Ascent is a top-down, twin-stick action RPG from Swedish software house Neon Giant.  It’s their first game but members of Neon Giant were involved in Gears of War, Doom, Wolfenstein and PSC favourite Bulletstorm.

With its top-down perspective and ‘dungeon-crawling’ mission structure, a lot of people seem to think of The Ascent as a sort of futuristic Diablo with guns but PSN is already home to several games of this type from the fantastic rogue-lites Neon Chrome and Jydge to the more action-based Ruiner.  Either way, this game takes the overhead perspective and marries it to a detailed, futuristic cyberpunk setting. 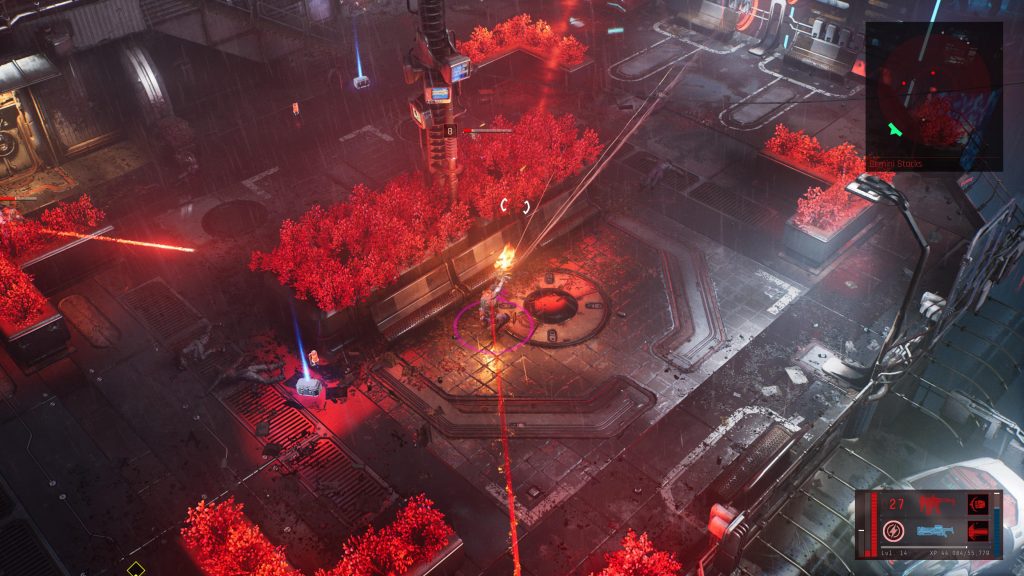 The Ascent is set in a futuristic dystopian world called Veles.  It’s a towering structure where society’s lower-paid workers, known as Indents, keep the place running down below in the miserable depths of the city (well, actually its an arcology apparently) and the elites live up high where there’s still clean air.  The Indents are essentially slaves and you start the game as one of them.

Initially, you run missions for the local shady mob but when your real employers, The Ascent Group, abandon Veles, a new corporation step in and begin to use your particular set of skills for much more important, and deadly, missions. 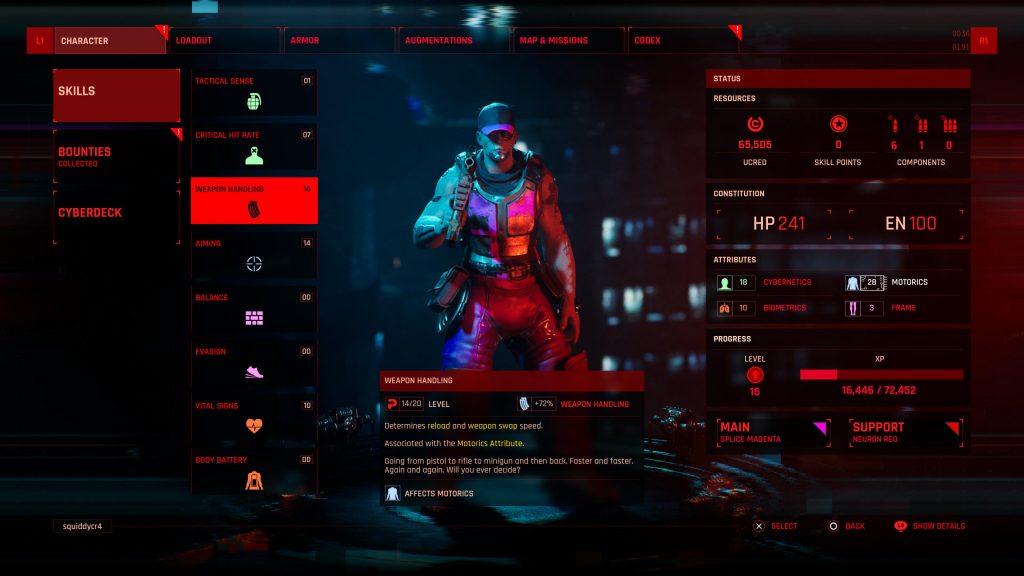 The gameplay itself plays out as a fairly refined twin-stick shooter.  You move with the left stick, you aim with the right and you shoot with R2.  However, there’s more depth and nuance here than we’re used to from the genre.  For example, you’re encouraged to duck behind cover and then aim high using L2 to blind fire at enemies who will always outnumber you.  But the thing is, the enemy AI is great here so if you stick to that tactic, they’ll rush you to get you out of cover.  Try to run and gun your way to success and they’ll adapt by using cover themselves.  It really gives the AI a feeling of being more than just cannon fodder.

The challenge is reasonably stiff right away but being a cyberpunk-based game, that means you’re certain to find new weapons and body modifications.  This is an other area where the game shines.  In terms of weapons, you start with a pistol but will eventually find rifles, shotguns, rocket launchers, flamethrowers and so on.  There are several weapons of each type too so you’re really encouraged to try them all out.  What’s amazing is that no weapon is bad either, so it’s all just about finding the ones (you can hold two) that work best for you. 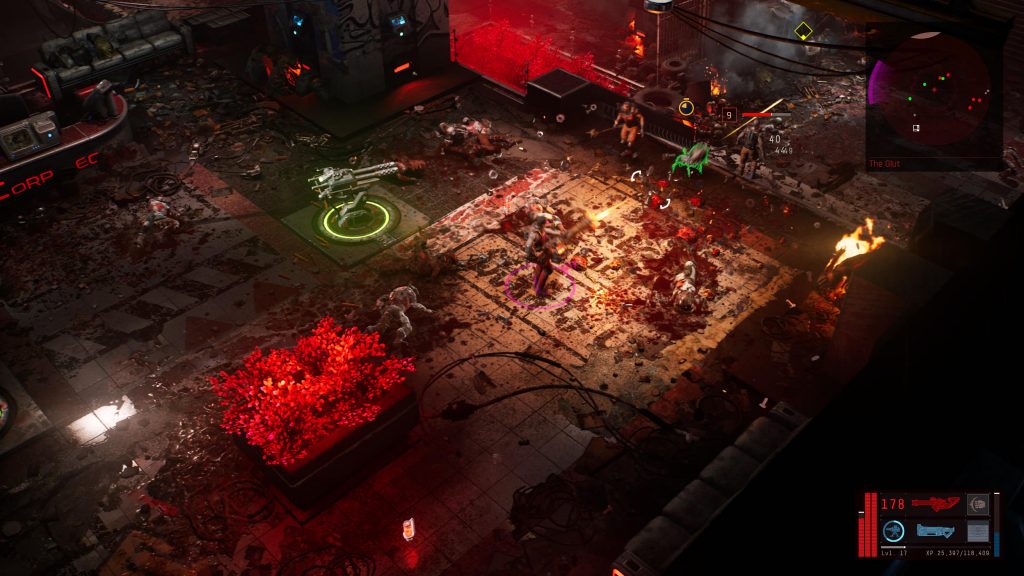 Weapons do have different damage types too so while a machine gun is great at tearing through the flesh of the local Yakuzas, you might want to switch to an energy weapon to take out any robots.  RPGs often have this sort of thing going on (for example, some enemies are more susceptible to fire damage or ice etc.) but The Ascent just seems to do it better.  You’re always aware when a gun isn’t right for a particular battle.  And the guns are actually interesting here.  Initially, I got very attached to a machine gun but when a mini-gun came along for human crowd control and I paired it with an burst-fire energy rifle with homing bullets, that was my set up for quite a while.

You also get ‘tactical’ weapons too which are your throwables.  Initially, you get a grenade but before long you’ll have options for turrents, drones, healing stations and lots more.  The only minor niggle here is that you can only equip one at a time (they are fired off with L3) but, as with weapons, you can switch them out at any time. 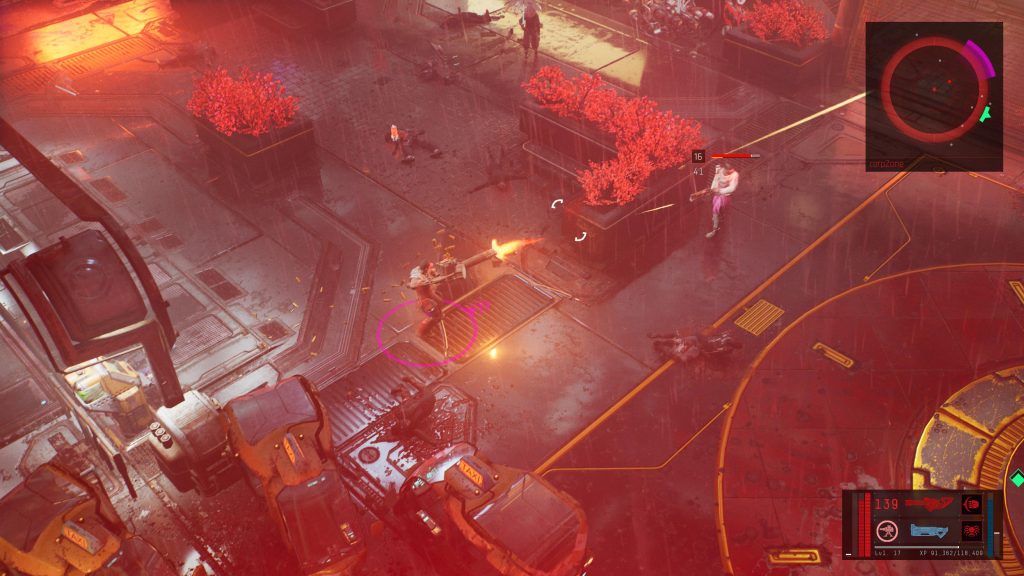 Your character also has abilities mapped to the shoulder buttons and these are great too.  Again, there are plenty of choices.  Initially we enjoyed the giant laser ability but before long we found one that drops spiderbots and that was us settled.  Luckily you get two choices here and there are so many good options that you’ll definitely enjoy experimenting with them.  You also get passive mods that improve health, energy usage and so on too.

Now that all might sound like a lot (especially when you factor in skill points and different armour types) but another thing that The Ascent does really well is that it feeds you this stuff in a nice, orderly way.  It’s never overwhelming.  There’s a real focus on quality-of-life for the player in this game.  From a Dead Space line that tells you where you need to go (just press up on the d-pad) to the way that pressing L3 in the inventory screens gives you additional info about whatever gear you’re looking at, it all just feels like a real joy to play. 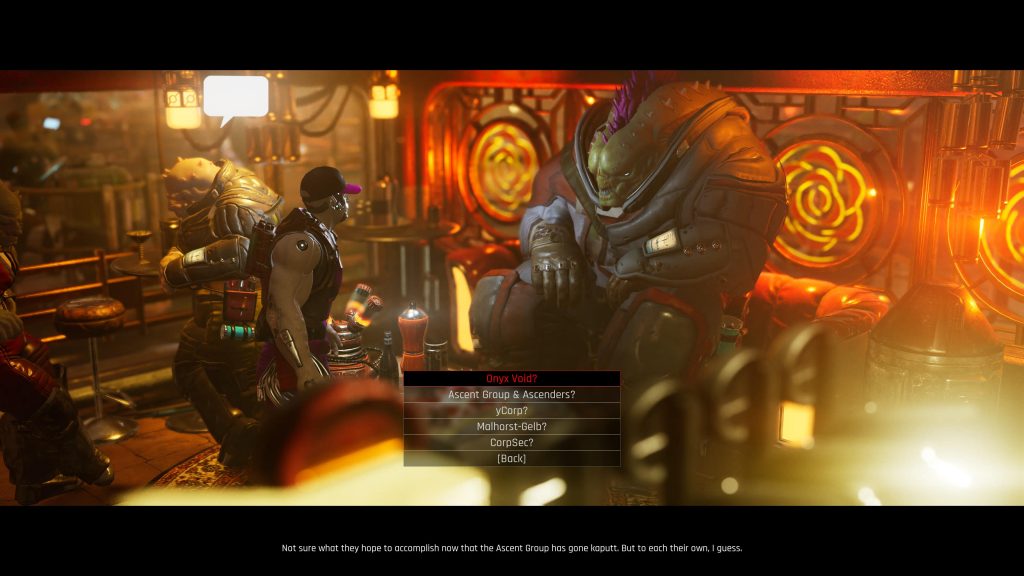 That’s not to say that it’s a walk in the park though.  You’ll die plenty of times while playing this game.  Enemy encounters can be brutal and savage, especially when explosives are involved.  But the difficulty is scaled perfectly and if you do get overwhelmed, just go off and do some side quests or try out a new weapon configuration and you’ll be back in the fight.

Having, in recent years, tried and failed to get into both Cyberpunk 2077 and Prey, I was a little nervous about taking on a futuristic game.  They’re usually so faffy with every room being full of things to scan, read, pick up and use.  It makes them a real hassle if you’ve got any kind of gaming OCD but The Ascent makes it all so much easier.  The depth and detail are still there but this is a game that tells you exactly where the loot is and doesn’t pepper the area with useless stuff. 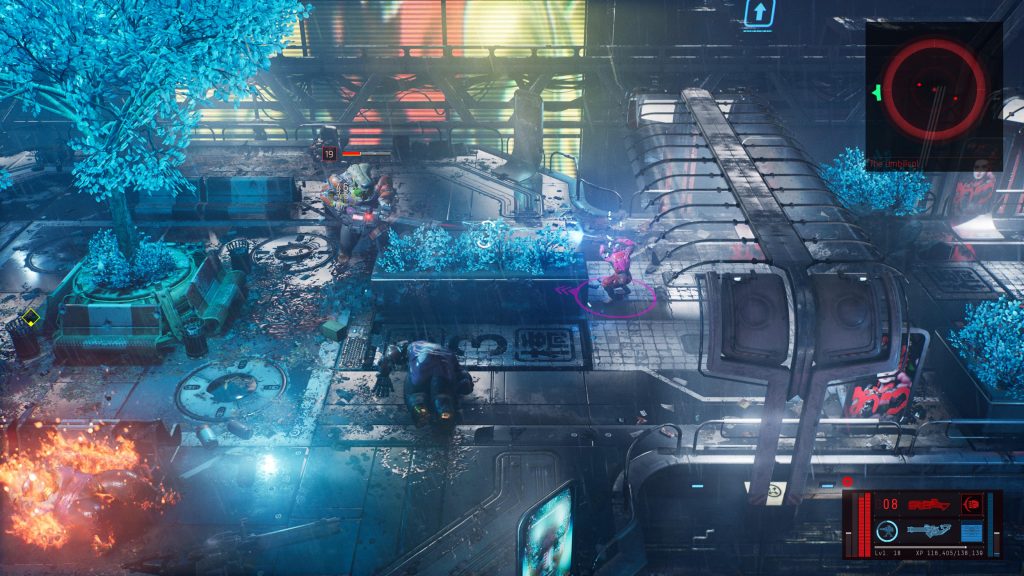 The other area that The Ascent scores highly in is the production.  And by that we mean, this might be the best looking game on the PS4 and PS5.  The environments are incredibly detailed and, despite being a top-down affair, there’s real depth to it.  You can often see things happening far in the background and the game likes to shift camera angles now and again to add a little bit of visual drama.  Remember that bit in Journey where the view went side on for a minute?  Well, imagine that but a lot better.  This game loves to show you cool things.  Indeed, it’s full of memorable moments and that’s what we always hope to see in our games.  Sure, it’s nice to have lovely views of hills in Far Cry or Horizon, and that stuff is important, but The Ascent would rather show you something cool or dramatic.

Add to that the living, breathing feel of a world full of people and machinery, all brilliantly represented thanks to the game’s amazing use of sound and haptics, and you really do feel part of this world.  This might sound odd but it all felt so authentic that actually, we really went out of our way to not kill civilians, always giving them the chance to clear the area before we let the bullets fly.  It’s a silly thing but that’s what this game can do to you. 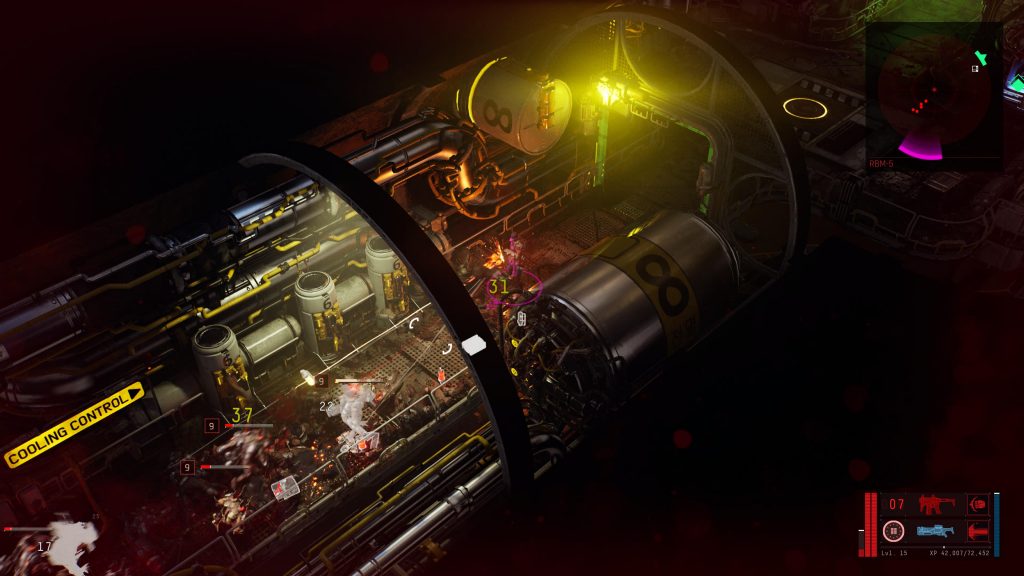 In terms of criticisms, there aren’t many.  We do find the PS5 loading times to be unacceptably long (I mean that’s the main thing the PS5 is meant to avoid) and like literally any game with a futuristic 3D map screen (Doom, Alien Isolation), trying to read the map can be a bit tricky but again that guidance line does mitigate that during missions (but does make looking for loot a little trickier).  And like most dungeon-crawlers, all the good loot is found out in the world, while shops tend to be less useful.

But those a minor annoyances compared to the great things that The Ascent does.  In terms of eye candy, gun play and upgrades, we’re very happy with what this game offers.  It might not get the attention that it deserves given that it’s not an exclusive and it’s been released in the same quarter as some big games (Elden Ring, Horizon: Forbidden West and Sifu) but do not sleep on this one.  The Ascent is excellent.

Summary
The Ascent is cyberpunk done right. It might just be the best looking game on PSN and with its excellent action and wide range of weapons and upgrades, The Ascent is truly a joy to play.

One thought on “The Ascent – PS5 Review”